The Satyrs and Wood-nymphs (Satyrinae), the biggest subfamily of the Brush-footed butterflies (Nymphalidae), are generally inconspicuous and brown in colour. Probably, this is the reason that there is a lack of interest in this subfamily. Compared to other species the colour gives them a dull look. At the underside of the wings, they have circular eye-spots to which they owe their family name. The host plant is usually a species that belongs to the grasses. It is not always easy to identify the Satyrs and Wood-nymphs.

The Small Heath (Coenonympha pamphilus) is a common butterfly that flies around for two or three generations from March to October. It is an unnoted butterfly that flies only in sunshine and rarely settles more than a meter above the ground. The habitat is on grassland where there are fine grasses, especially in dry, well-drained situations where the grasses are short and sparse. The underside of the rear wing usually has small brown-rimmed white dots. The upper side is light orange-brown. The wingspan is 34-38mm. Host plant: bents, fescues and meadow grasses. Dutch name: Hooibeestje. Frisian name: Heaflinter. 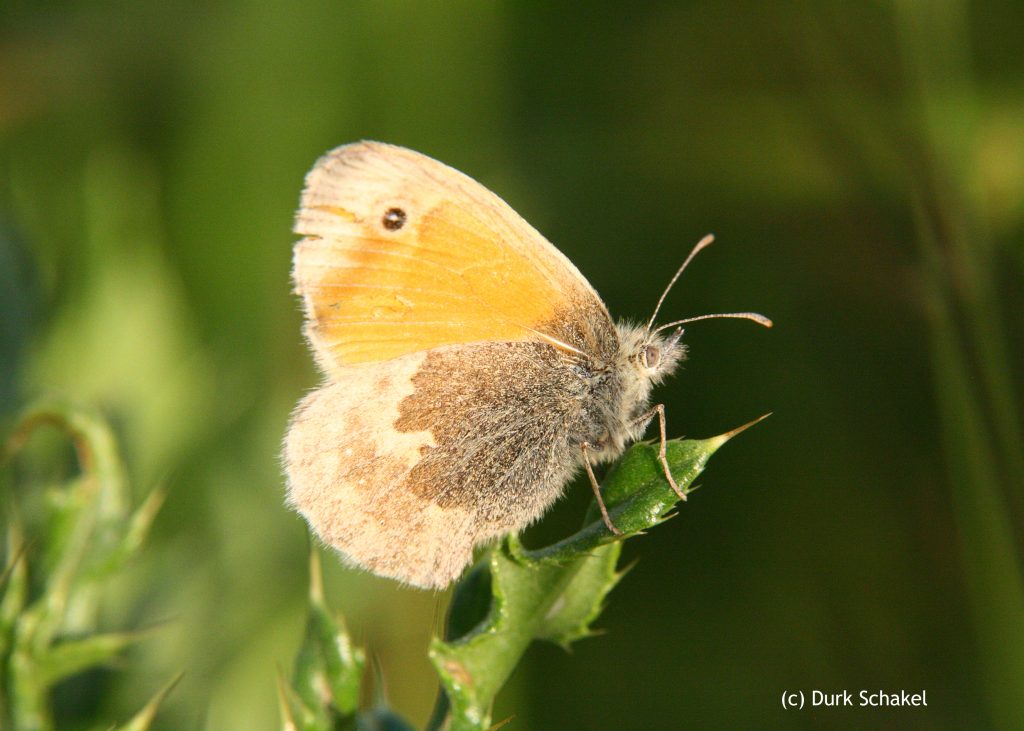 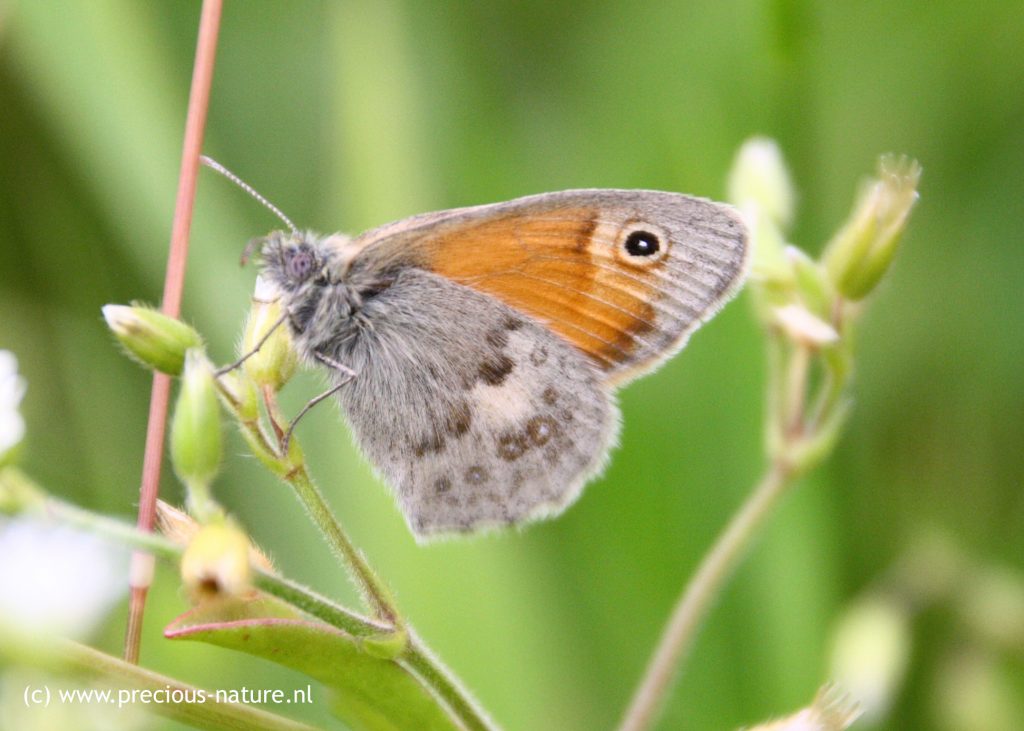 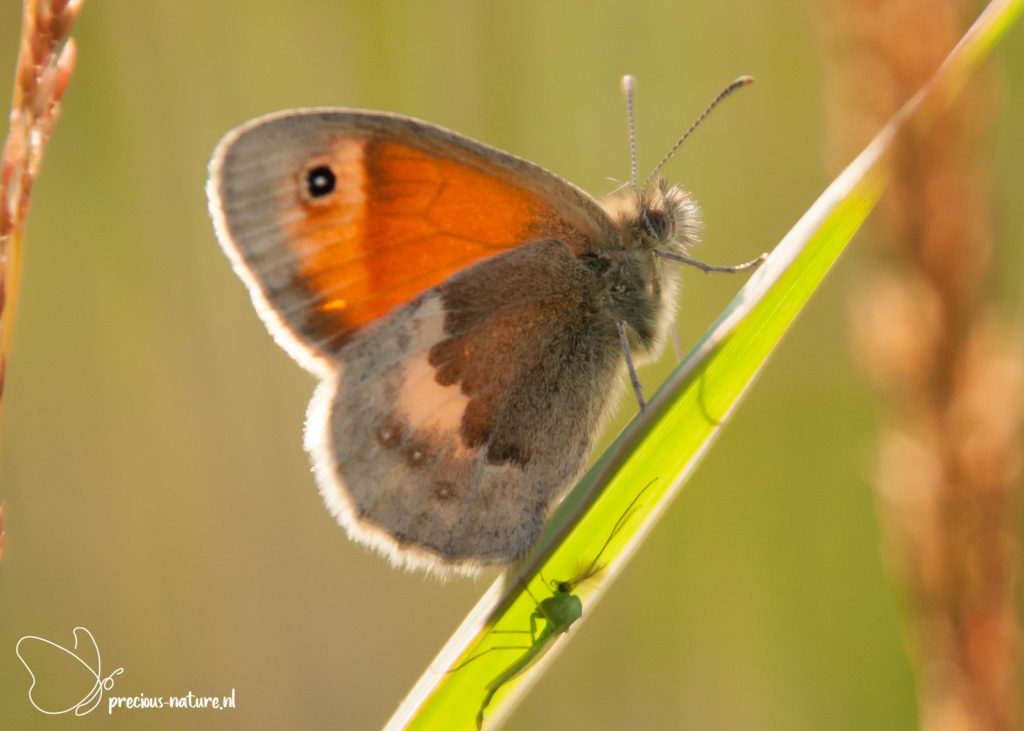 A critically endangered and rare butterfly is the Large Heath (Coenonympha tullia). In the Fochtelooerveen (Netherlands) in particular, this species is slowly returning due to remedial measures taken. This habitat consists of wet boggy areas. The top of the wings is brown with a small black eye-spot in the wingtip of the front wing. The underside of the front wing is orange from the wing root, which changes by a white blotch into light brown. The underside of the rear wing is brown. On both wings is a row of black eye-spots at the outer edge with a white core and a yellow border around it. Characteristic is the white blotch on the outer edge of the rear wing that runs up to the wing edge. The wingspan is 41mm. Adults always sit with their wings closed and can fly even in quite dull weather. The flight period is from June to August in one generation. Host plant: Hare’s-tail Cottongrass. Dutch name: Veenhooibeestje. Frisian name: Feanheaflinter. 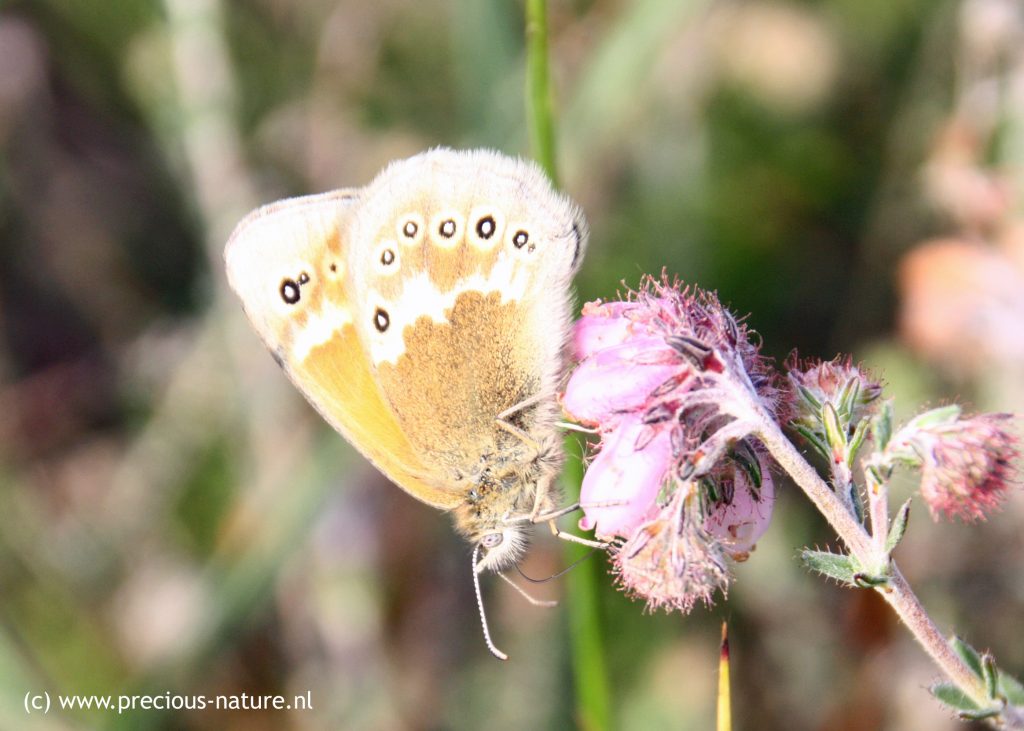 The Speckled Wood (Pararge aegeria) is very easy to identify. The upper side of the wing is dark brown with many yellow spots that are larger in the female than in the male. The yellow spots close to the trailing edge have black spots with a small white core, as well as on both wingtips of the front wings. The wingspan is 47-50mm. The butterflies often perch in sunny spots, spiralling into the air to chase each other to intercept an intruder. Both sexes feed on honeydew in the treetops and are rarely seen feeding on flowers, except early and late in the year when aphid activity is low. This satyr flies around in several generations from February to November. Host plant: false brome, Cock’s-foot and common couch. Dutch name: Bont zandoogje. Frisian name: Bûnt sâneachje. The Wall Brown (Lasiommata megera) is a butterfly that occurs throughout the Netherlands from March to October in several generations. It has a similar size and colour as the Gatekeeper, but the Wall Brown is much more heavily patterned and sometimes confused with small fritillary butterflies. The Wall Brown is aptly named after its habit of basking on walls, rocks, and stony places. The delicately patterned light brown undersides provide good camouflage against a stony and sandy surface. In hot weather, males patrol fast and low over the ground, seeking females. In cooler weather, they will bask in sunny spots and fly up to intercept females, or to drive off other males. Both the front and rear wings are orange at the top with brown veins and hem stripes. On both wingtips of the front wing is a black dot with a white core. The male is distinguished from the female by the hairy scent stripe on the upper side of the front wing. The wingspan is 44-46mm. Host plant: False Brome, Cock’s-foot, bents, Wavy Hair-grass. Dutch name: Argusvlinder. Frisian name: Argusflinter. 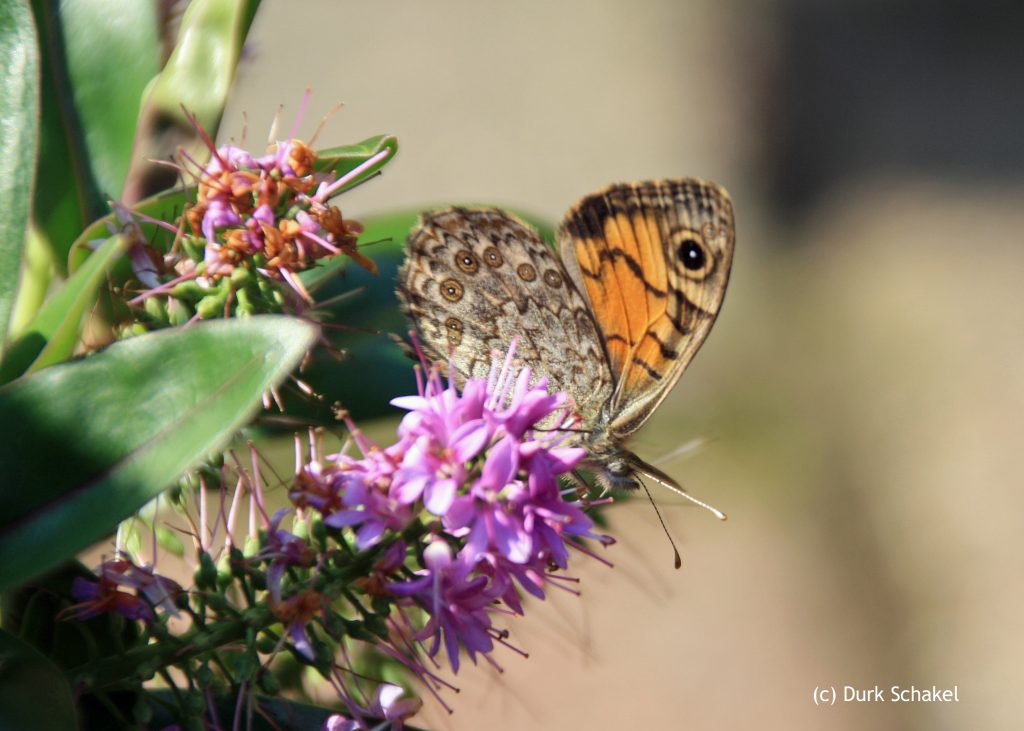 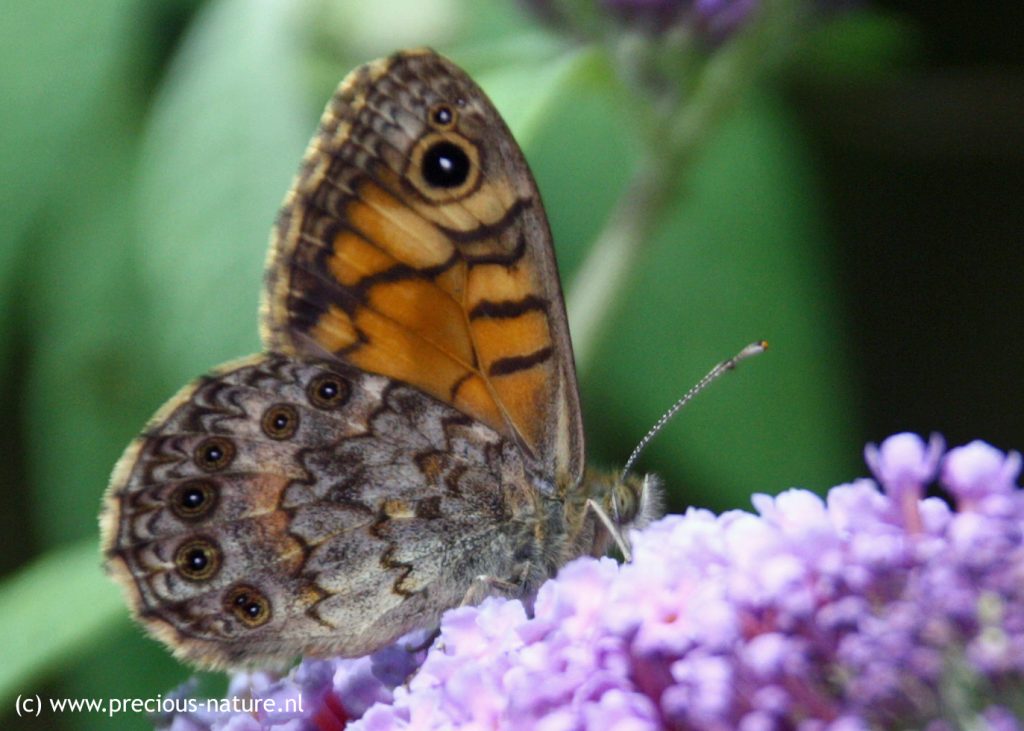 The Meadow Brown (Maniola jurtina) is often mistaken for a Small Heath if the butterfly is sitting with its wings closed. An important difference is that the Meadow Brown does not have small white dots on the underside of the rear wing. As soon as the Meadow Brown spreads the wings, the difference is clearly visible. In the male, the upper side of the front wing is brown with a black eye-spot without a white core, in the female, on the other hand, an orange field and a black eye-spot with a white core can be seen. Sometimes a double white core like the Gatekeeper could occur. The upper side of the rear wing is brown on both species. The Meadow Brown is the most abundant butterfly species in many habitats. Adults fly even in dull weather when most other butterflies are inactive. The wingspan is 50-55mm. Host plant: fescues, bents, meadow grasses, Cock’s-foot, false brome. Dutch name: Bruin zandoogje. Frisian name: Brún sâneachje. 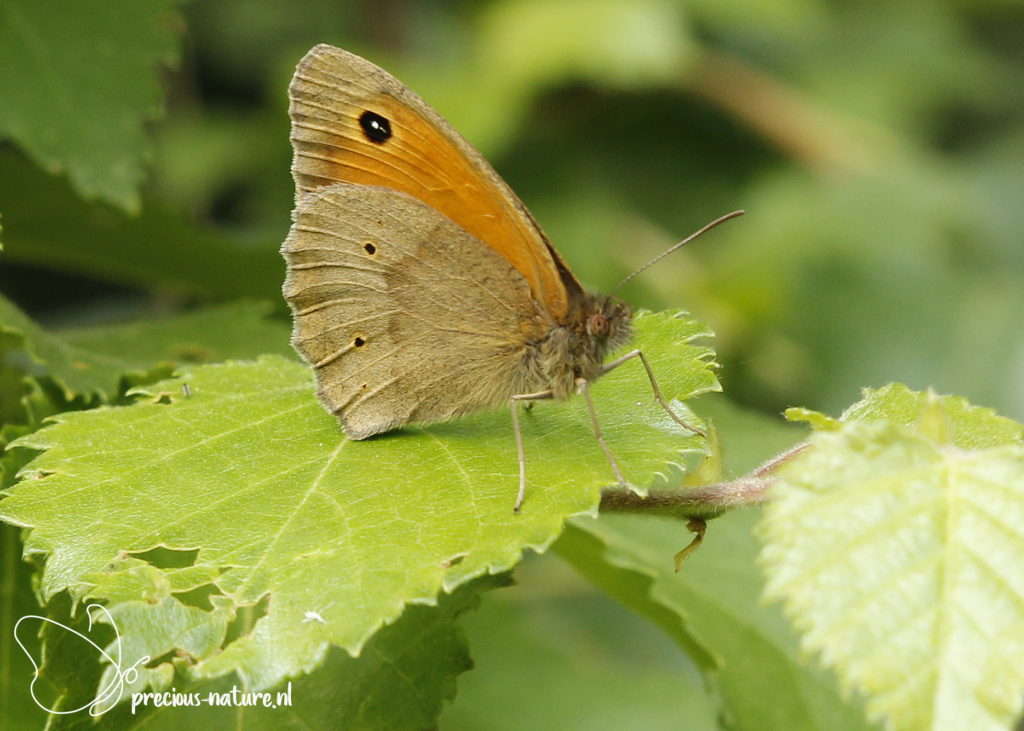 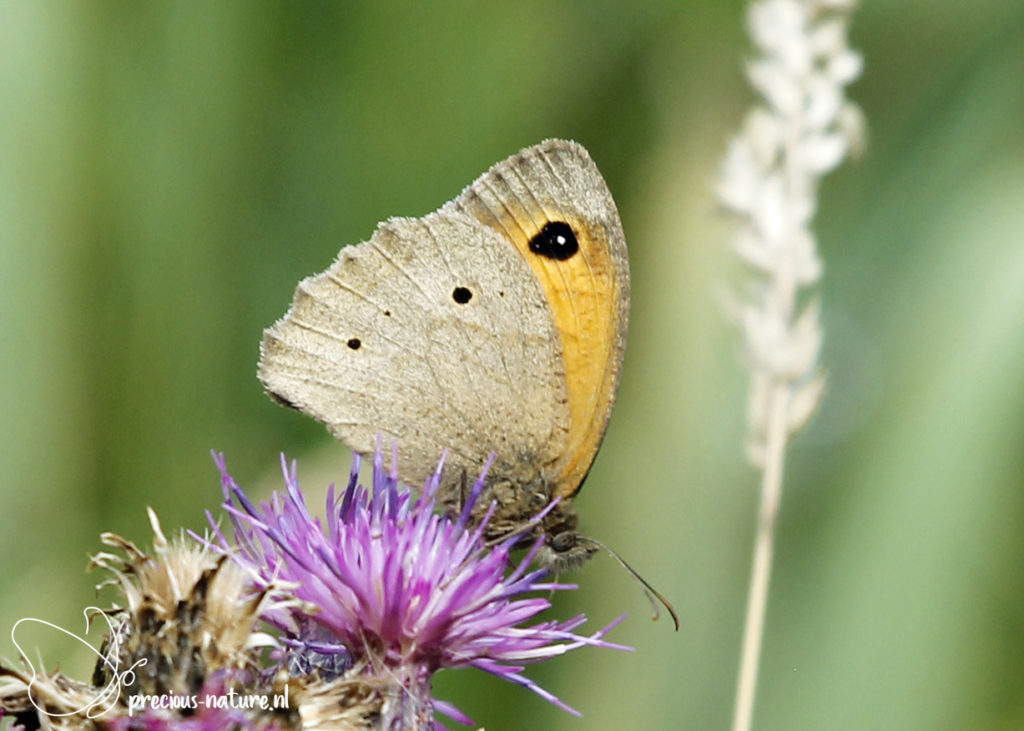 The Gatekeeper or Hedge Brown (Pyronia tithonus) can be distinguished from the Meadow Brown by the orange upper side with a broad brown edge on both the front and rear wings. A black eye with a double white core is visible in the wingtip of the front wing. This is not a characteristic that gives a definite answer, because the female of the Meadow Brown sometimes also has a double white core. The wingspan is 40-47mm. The Gatekeeper flies in one generation from July to September and as its name suggest, he is often encountered where clumps of flowers grow in gateways and along hedgerows and field edges. Favourite nectar sources include Wild Marjoram, Common Fleabane, ragworts and Bramble. Host plant: bents, fescues, meadow grasses and common couch. Dutch name: Oranje zandoogje. Frisian name: Oranje sâneachje. A newly Ringlet (Aphantopus hyperantus) has a velvety appearance and is almost black on top for both wings, with a white fringe to the wings. The underside is light brown and has distinctive yellow-rimmed black eye-spots with a white core. The small circles on the underwings, which give the butterfly its name, vary in number and size and could be enlarged and elongated or reduced to small white spots. The wingspan is 48-52mm. Bramble and Wild Privet flowers are nectar sources, and adults continue to fly with a characteristic bobbing flight in dull, cloudy conditions when most other butterflies are inactive. This common butterfly flies in one generation from June to August. Host plant: Cock’s-foot, False Brome, Tufted Hair-grass, Common Couch, and meadow-grasses. Dutch name: Koevinkje. Frisian name: Donker sâneachje. 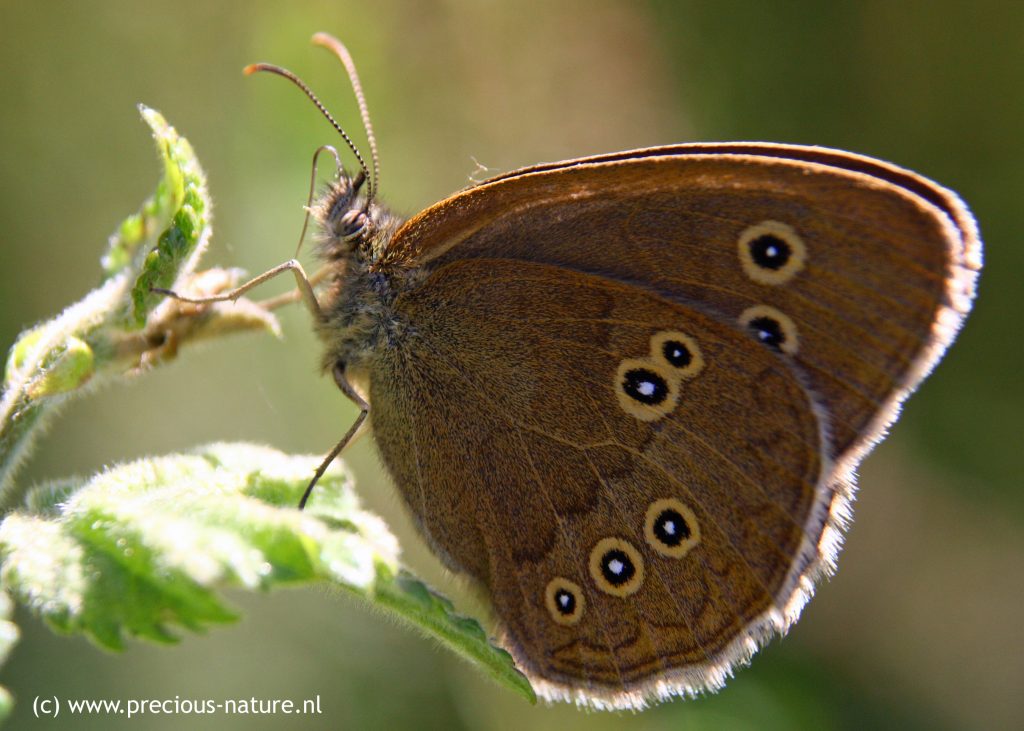 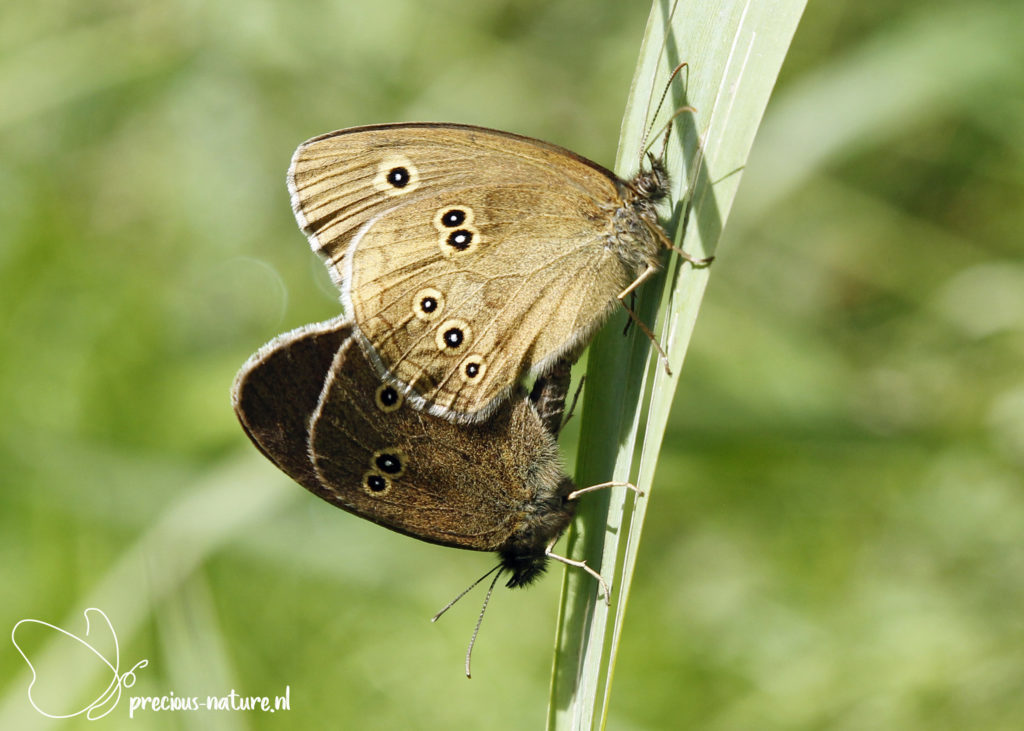