Tussock Moths (Lymantriinae) are a subfamily of the Erebid Moths (Erebidae). It is clearly a group of moths resembling owls, given the posterior part of the thorax, the metathorax, which bears the posterior pair of legs. On the basis of this, this group of moths was first classified under the owls (Noctuidae), but in 2011 under the newly revised family of Erebid Moths. Around the world, there are about 2,700 species, most of which live in the tropics. 12 species are recorded in the Netherlands. The Tussock Moths are hairy with the males having strongly feathered antennae while the females’ antennae are wire-shaped or sometimes light feathery. Unlike Tiger Moths (Arctiinae), they have bract colours such as grey and brown.

A welcome and pleasant surprise when I discovered the White Satin Moth (Leucoma salicis). When sharing photos on social media, people responded very positively. This moth is easily recognizable by the strong silky shine, the black and white ringed legs and the completely white hairy abdomen. When spreading the wings it seems as if you can see through the wings. The male has strongly featherlike antennae. The female is larger and has threadlike antennae. The flying period is in one generation from May to August and the wingspan is 37-50mm. Host plant: Poplars and sallows. Dutch name: Satijnvlinder. Frisian name: – 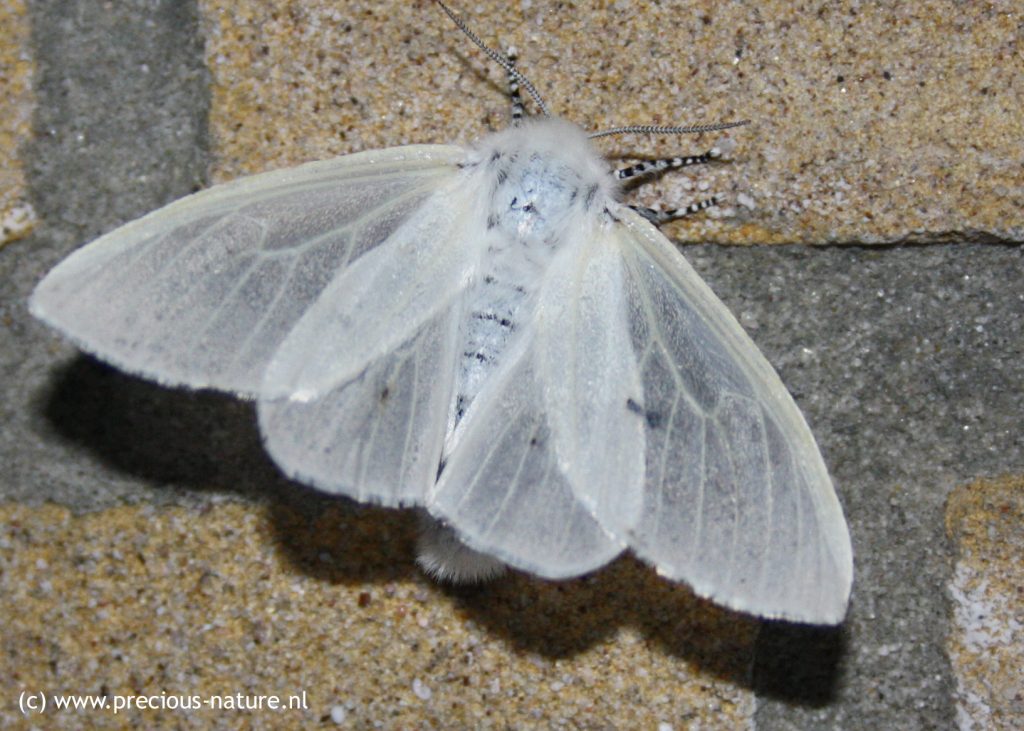 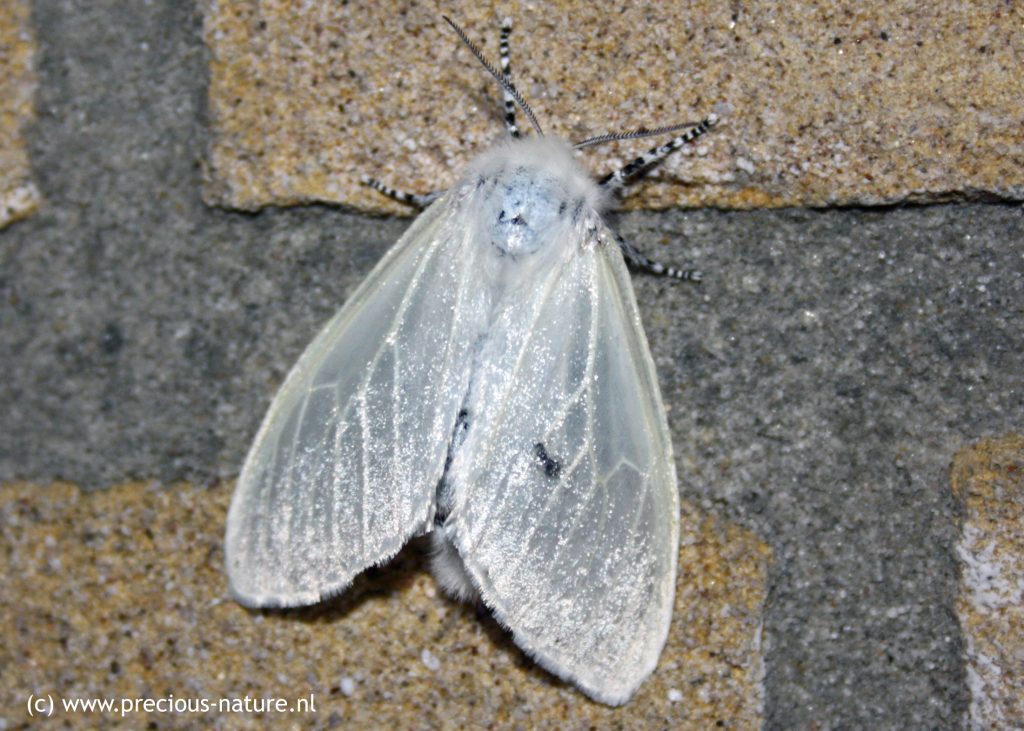 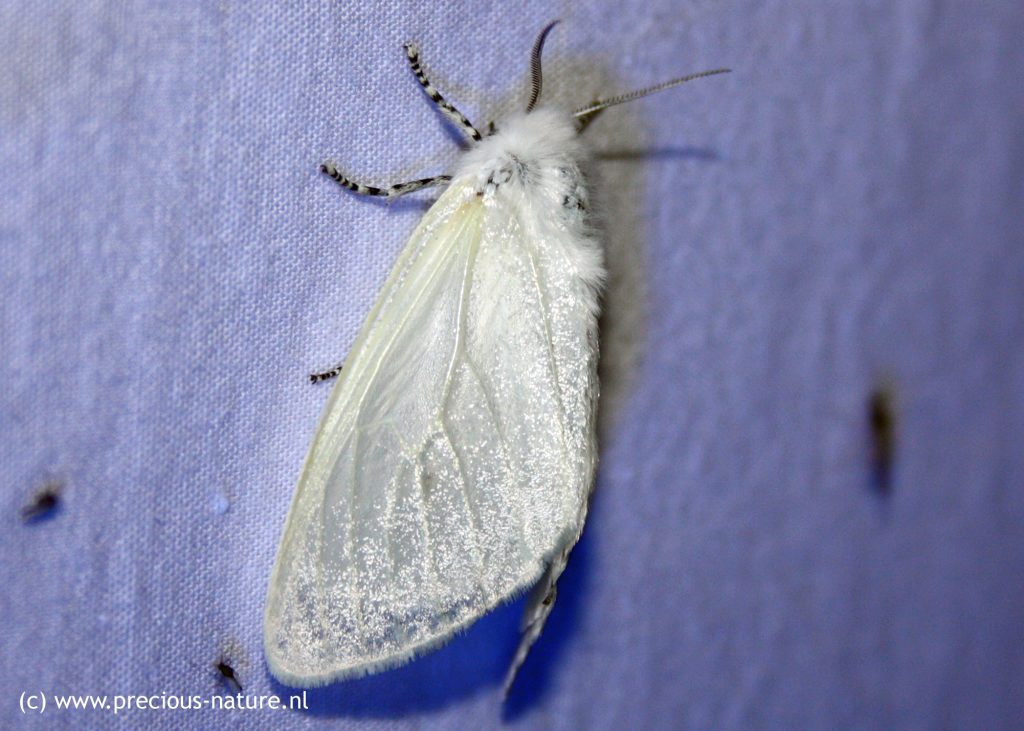 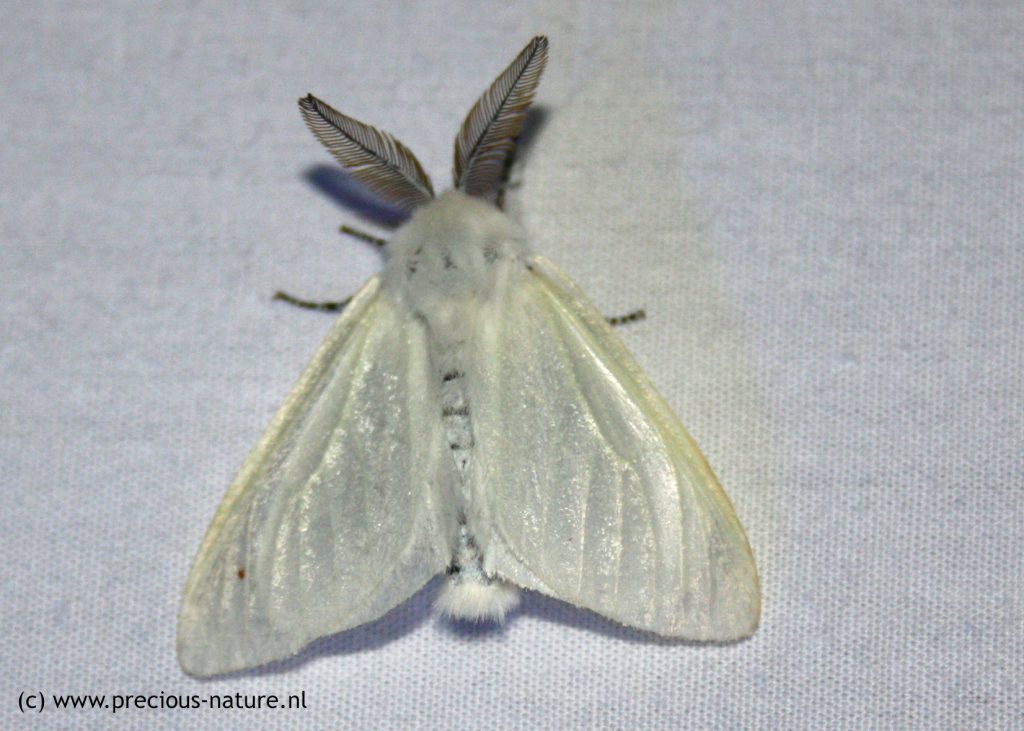 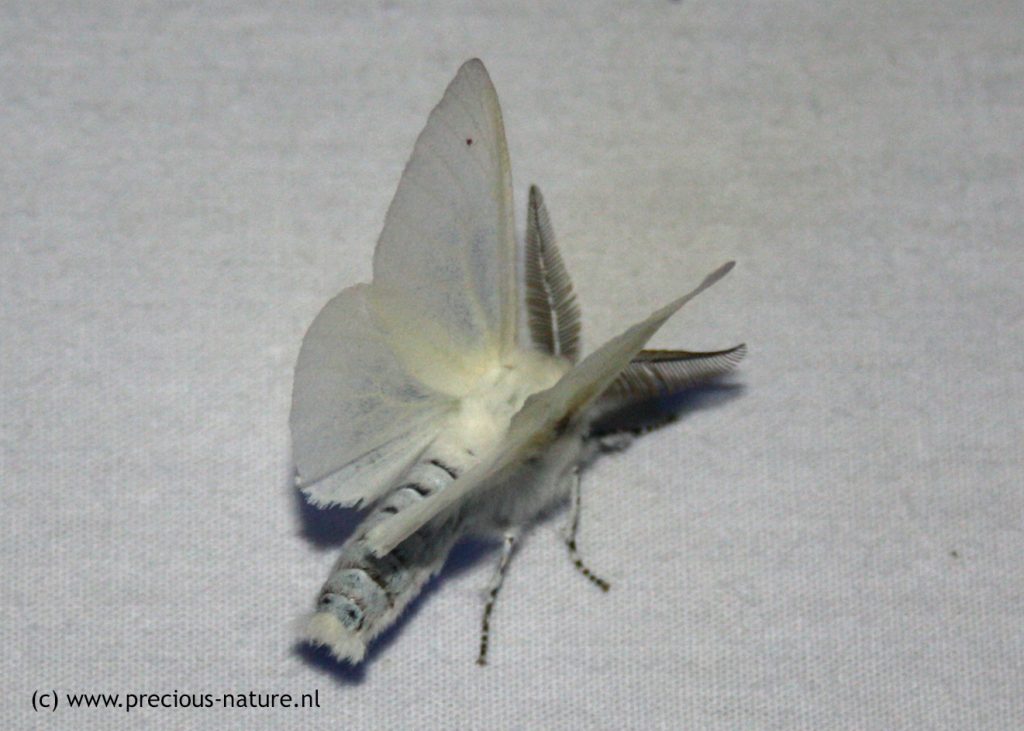 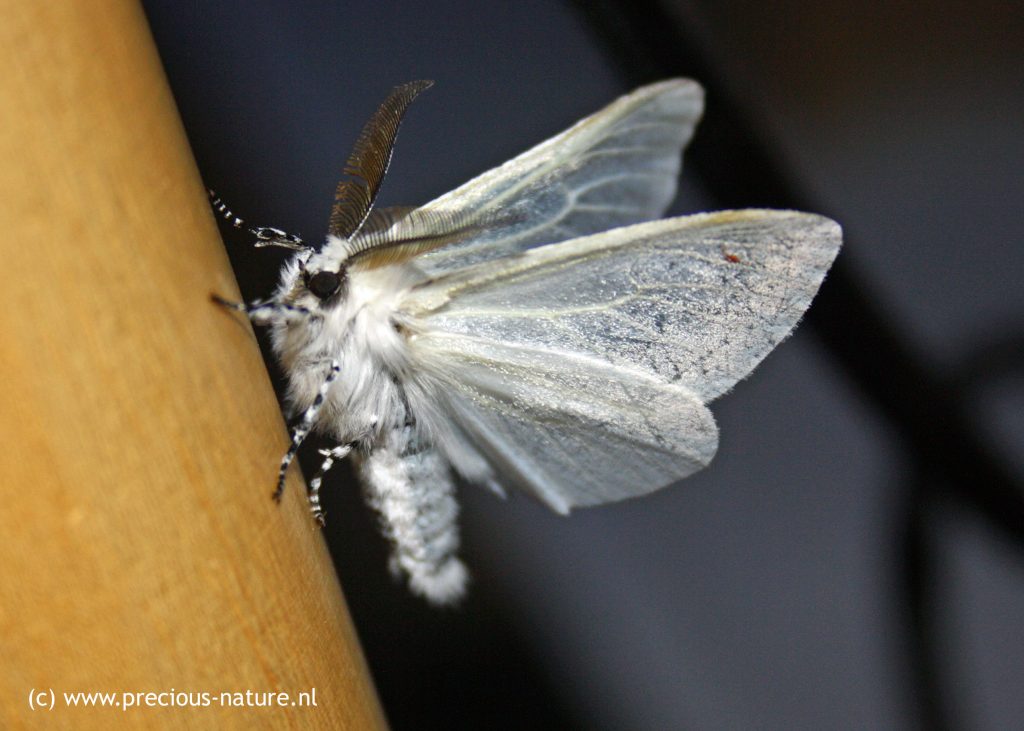 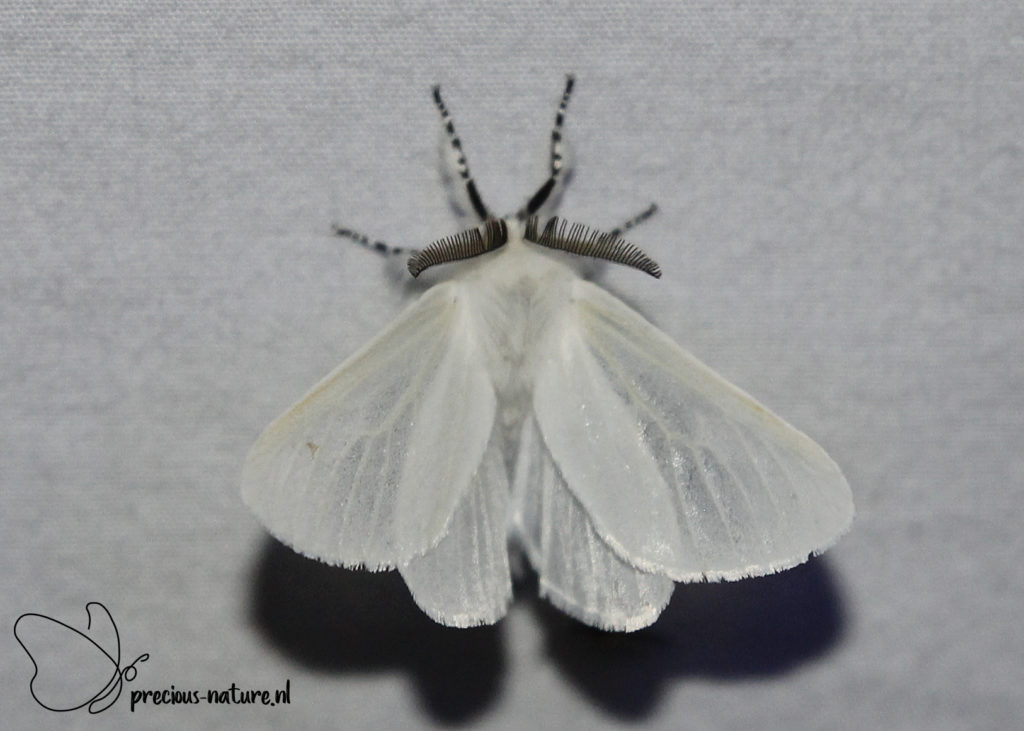 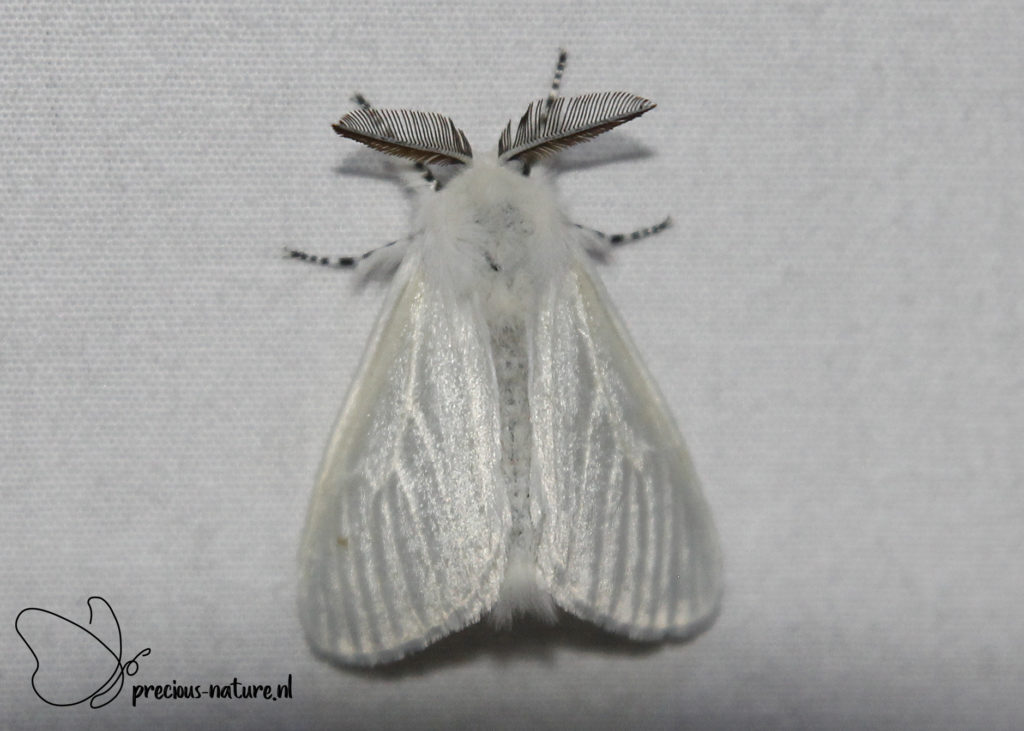 The Brown-tail (Euproctis chrysorrhoea) has a pure white and slightly glossy top of the wings. The top of the male’s abdomen is white at the front but brown at the end (hence the English name). At the head and the top half of the legs, this butterfly has enormous white hair. He can be distinguished from the White Satin Moth (Leucoma salicis) by the absence of black/white ringed legs. The flight time is from June to September in one generation and the wingspan is 36-42mm. Host plant: Hawthorn, Blackthorn, Bramble and various fruit trees. Dutch name: Bastaardsatijnvlinder. Frisian name: Bastertsatynflinter. 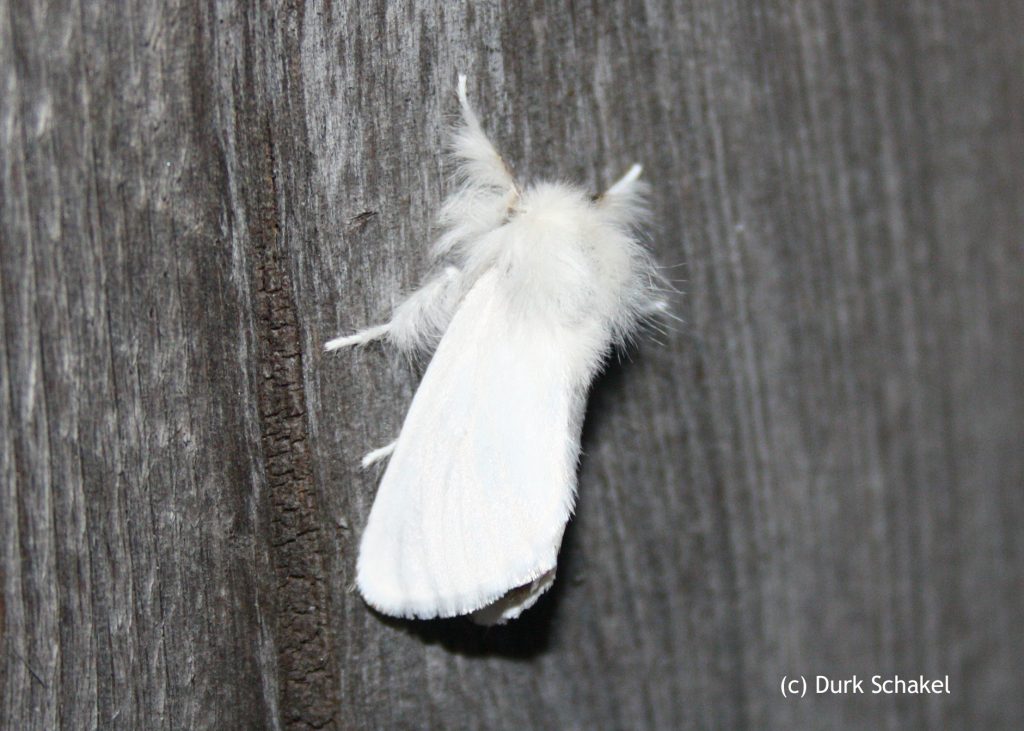 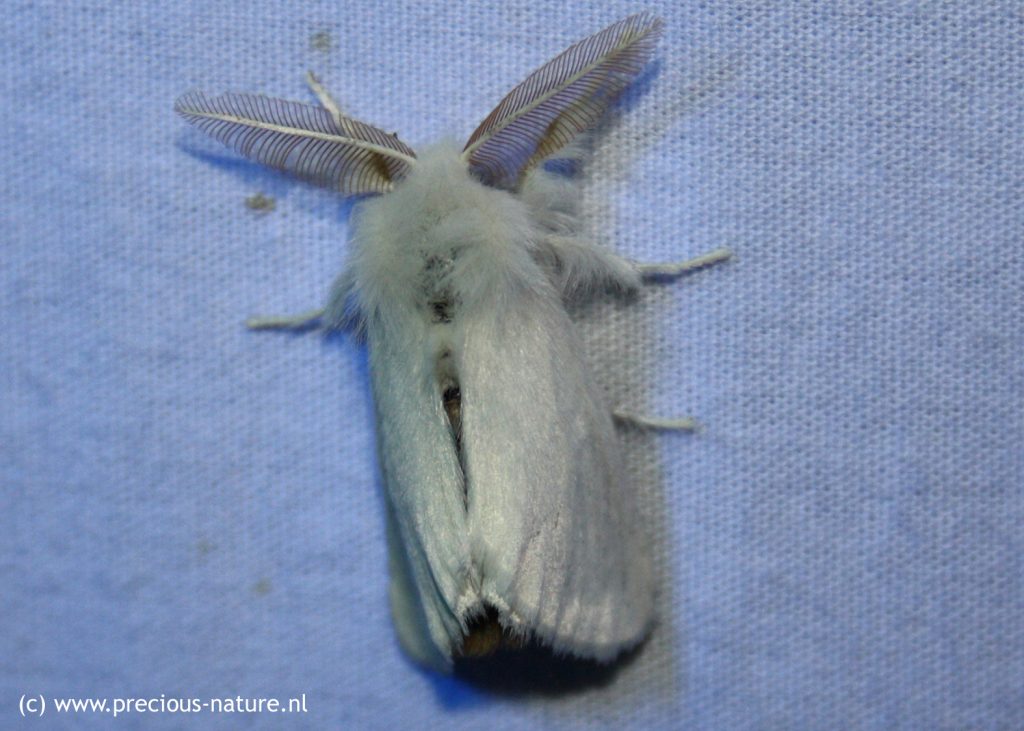 A moth that is difficult to distinguish from the Brown-tail (Euproctis chrysorrhoea) is the Yellow-tail (Euproctis similis). The main distinction is in the abdomen, but it is often not visible. You usually encounter this moth in a resting position. The abdomen is largely white with a golden yellow or orange-brown tip. When they are disturbed, the abdomen is raised between the wings. Furthermore, the leading edge of the front wing is slightly more rounded than with the Brown-tail. The male has a distinct, white-veined dark grey or blackish spot intersected at the inner edge of the front wing. The female is larger and at most has some faint spots in the inner edge corner. The flight period is in one generation from the beginning of June to the end of September and the wingspan is 28-35mm. Host plant: Blackthorn, Hawthorn and Birch. Dutch name: Donsvlinder. Frisian name: Dûnsflinter.