Butterflies belong to the order Lepidoptera. After the beetles, the butterflies form the largest number of species. No fewer than 160,000 different species of butterflies have been described. Europe is an important area where a large number of species have their distribution area. Unfortunately, by building cities, intensifying agriculture and industry, and therefore changes in the climate, people are the cause of the quick deterioration of the numbers or species. Where are e.g. those roadsides with a variety of flowering plants? But those with an eye for it can still enjoy a rich variety of butterfly species. Let’s keep it that way and be careful with this beautiful fauna.

The build and wing characteristics of butterflies and moths are basically the same, but there are specific essential differences. Figure 1 lists the most important terms that are commonly used to describe the basic characteristics of a butterfly or moth. 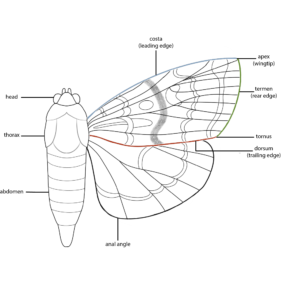 The body of a butterfly consists of three distinct parts: the head, the chestpiece, and the abdomen. The head contains the main organs for sensory and food intake, the chest piece is focused on motor skills, and the abdomen for digestion, secretion, and reproduction. The antennas are located on a relatively small and round head, especially for detecting odors. With most moths, the antennas are thin and tapering. Some have many branches that make it look like a kind of feather. Butterflies have a bud or bulge on the end of the 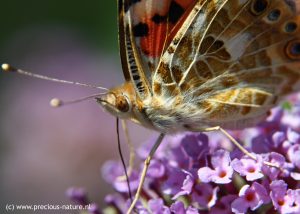 antennas. The eyes of a butterfly, suitable for detecting movement but no clear images, are larger than for a moth. With a moth, the eyes are less light-sensitive but are able to perceive UV light. That is why they are attracted to such light in the late evening or in the night. The butterfly tongue is often clearly visible. After uncoiling the tongue it is used to sip nectar from a flower.

The wings, front and rear wing, like the legs, are attached to the chest piece. Several veins and cells can be observed on one wing. For moths, there are a number of characteristics that can be important to specify a species. For owls, for example, the so-called “owl spots”, the oval and kidney mark, are a key to identification. Figures 2 and 3 identify a number of characteristics that are used in the world of moths. 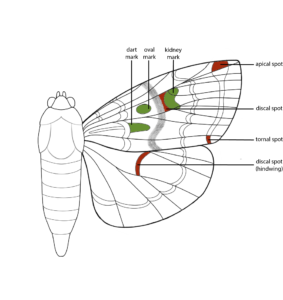 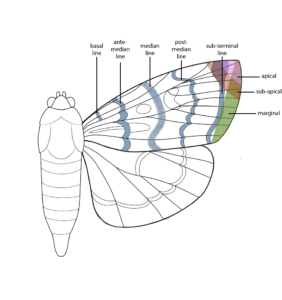 The way a butterfly is flying is a combination of moving the muscles that connect the wings to the brisket and rhythmically moving the brisket. The front wings are in most cases larger and sturdier than the rear wings. In particular with some moths, the difference is very large. In that case, the frequency of the wing beat is also much higher than that of the slowly fluttering butterflies. The wings are covered with scales that overlap each other 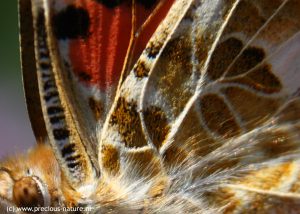 like roof tiles. Each scale has more or less the shape of a tennis racket that is, with its stem in an opening, attached to the wing membrane. When I was young, I was told that, when you grab a butterfly by its wings, the ‘flying dust’ would go off and they would no longer be able to fly. Actually, they are scales that are so small that it looks like dust. The scales contain pigments that are responsible for the color of the butterfly. In addition, there are also butterflies that have scales that are filled with air. As soon as the sun shines on the scales, the light on the interface of scale and air is refracted, and by scattering you get different colors. Depending on the thickness of the air chambers, you get other colors that are reflected, which we then see as the color of the wing. Besides the normal scales also scent scales are present over the entire wing. This allows a male to attract a female during the courtship ritual, by excreting stimulating fragrances.

A butterfly has six legs that they use for walking or hanging. With butterflies, the legs are not only used for walking, but the food is also tasted with it. In the Nymphalidae, the front legs are much smaller than the others, so it seems that only four legs are present. There is a track on the front leg that is provided with a brush. This allows the butterfly to clean the antennas. In males, there are many types of scales on the legs that disperse pheromones to attract a female. 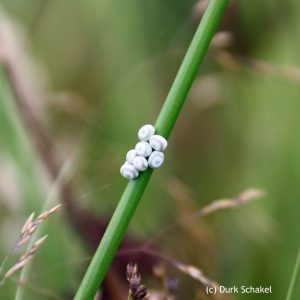 Eggs Drinker Moth at a grass

The abdomen is much softer than the head and chest. The male has a pair of pincers at the end that allows the female to be held during mating. The females have a few glands at the end of the abdomen with which they can excrete attractants, pheromones, with which they can only attract males of their own kind. Males, with their highly developed antennae containing many odor-sensitive cells, can detect these attractants. When the two are attracted to each other, mating takes place which can take up to an hour. The actual fertilization of the eggs only takes place when they are actually deposited on a host plant by using an adhesive. Each butterfly has one (monophagous) or more (polyphagous) specific host plants such as grasses, flowers, or even bark crevices. At plants, a female sits on the leaf and bends her abdomen around the leaf to deposit the eggs in a place where it is protected from the sun and possible enemies. The eggs grow into caterpillars that moult at the end of the larval stage into a pupa from which the final butterfly hatches. 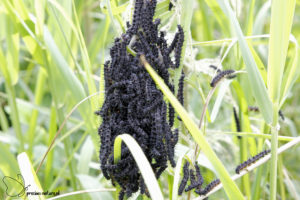 Bunch of caterpillars of the Peacock Butterfly on their host plant