In the family of Twirler Moths (Gelechiidae) are many genera that are very difficult to identify because they are very similar. The resting position of the adult moths is diverse. In most cases, the position of the wings is in a horizontal position up to slightly sloping. The threadlike antennas curve backward along with the wings or straight back in line with the body. The characteristic of this family is the narrower or wider hindwing in relation to the forewing and often ending in a point or finger-like projection.

There are several twirler moths that are sometimes difficult to identify without checking the genitals or paying close attention to the host plants. The Poplar Sober (Anacampsis populella) is one such micro-moth that resembles some common forms of the Birch Sober (Anacampsis blattariella). The Poplar Sober uses the poplar as a host plant in contrast to its congener, which uses the birch as a host plant. I have also used many literature sources but choose the Poplar Sober with some uncertainty. The forewing is variable in design. This ranges from almost without any drawing pale grey to black and white grey. The shape without any markings has black dots at the costa at about 1/5 and 1/3 of the wing, at 2/3, and further along the dorsum. The more marked shape is blackish to 2/3 with a light grey band along the costa. Both shapes have an angled white-grey transverse band at the end of the wing. The flying period is from the end of June to September and the wingspan is 14-19mm. Host plant: Poplar. Dutch name: Populierenspikkelpalpmot. Frisian name: – 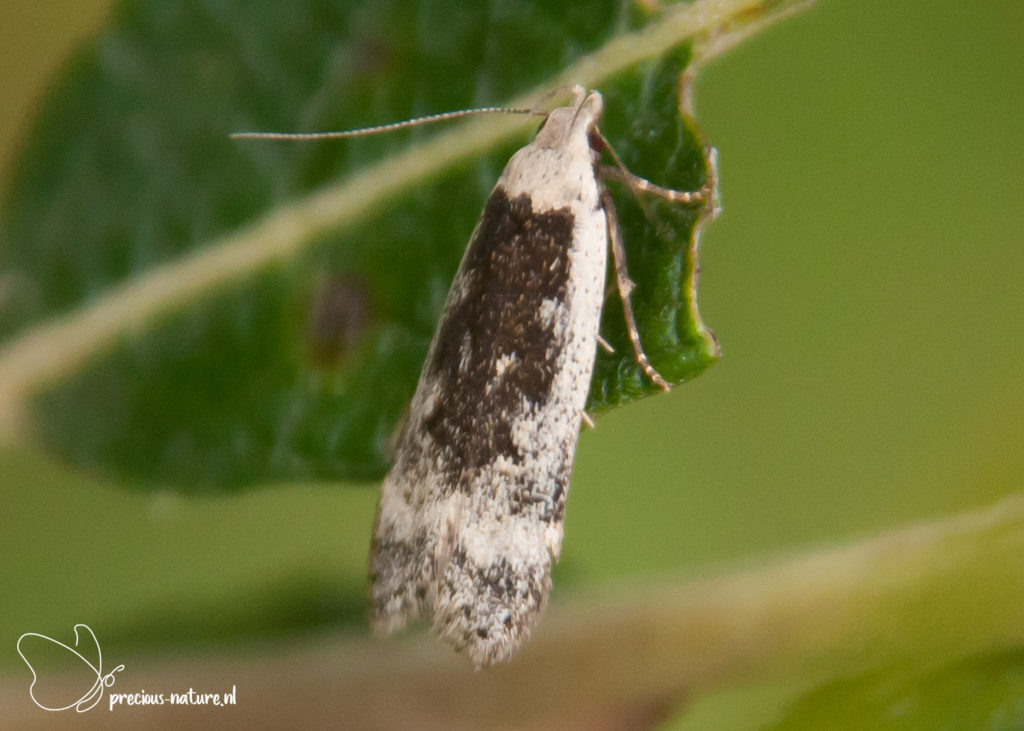 Genital examination is normally required to identify the White-strap Sober (Syncopacma larseniella), but there is a small detail in the forewing that distinguishes it from the Silver-barred Sober (Syncopacma taeniolella). The white or yellow-white transverse band on the black forewing is completely straight at the White-strap Sober, while this transverse band is slightly curved at the Silver-barred Sober. On the underside of the forewing, there is a small yellow spot near the costa, while in the Silver-barred Sober there is a narrow yellow-white transverse band. The flying period in one generation is from June to July and the wingspan is about 12mm. Host plant: Greater Bird’s-foot-trefoil and Common Bird’s-foot-trevoil. Dutch name: Bandpalpmot. Frisian name: – 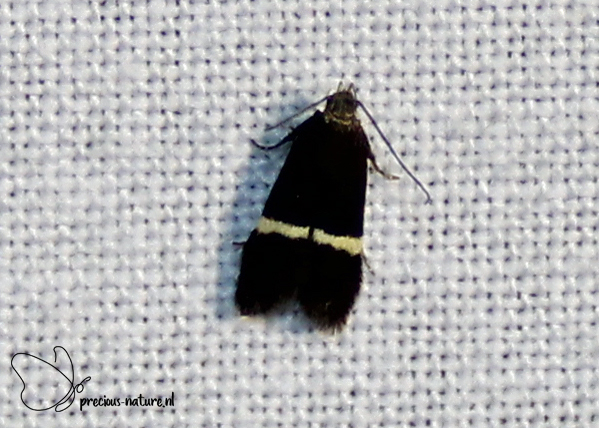 A difficult to identify twirler moth is the Dark Neb (Bryotropha affinis). At first, I thought it was the Thatch Neb (Bryotropha basaltinella), but according to the literature it does not have a black spot in the middle of the forewing. The forewing is dark brown with a yellow-colored base of the scales giving this moth a speckled appearance. There are four black-brown dots on the forewing, one on a quarter, one near the outer edge at 1/3, one at a half closer to the back edge, and one at 2/3. There are yellow scales at the end of the forewing, which makes a kind of transverse band visible. The flying period is from May to August in one generation and the wingspan is 9.5-12.5mm. Host plant: Mosses. Dutch name: Geelwitte mospalpmot. Frisian name: – 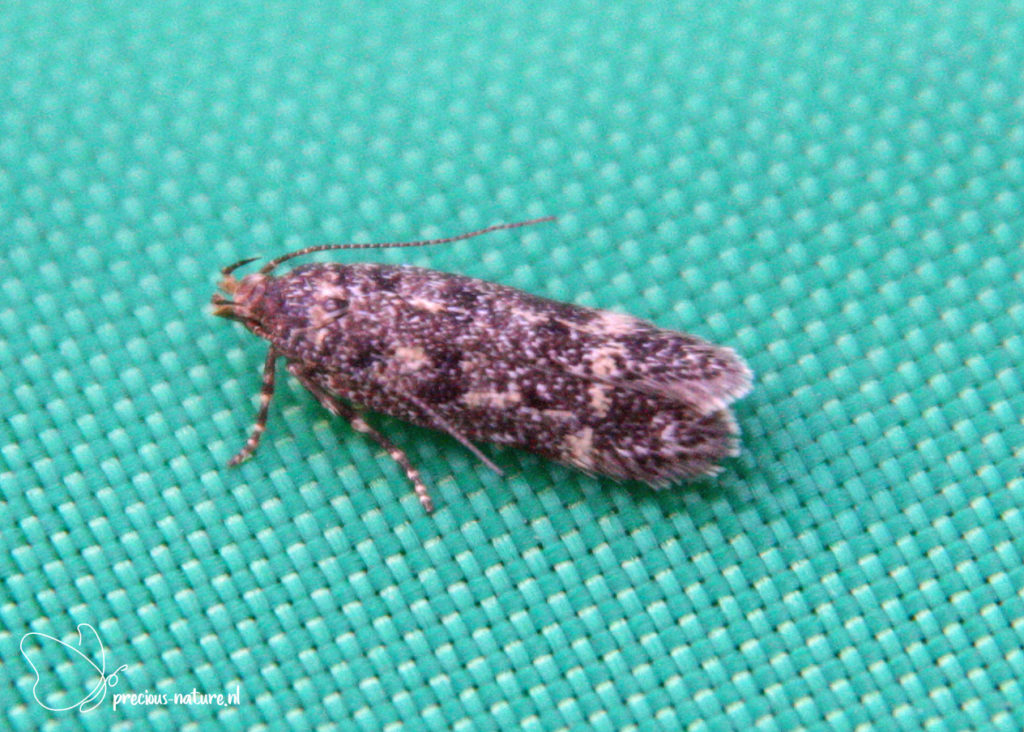 The forewing of the Cinerous Neb (Bryotropha terella) are light, dark or grey-brown. Normally, at 1/3 is a black dot, sometimes two together and at 2/3 another one. Sometimes the dots are clearly present, sometimes they are faintly visible. There is a dark brown speckling near the apex. The flying period in one generation is from May to August and the wingspan is 14-16mm. Host plant: Common Bent and moss. Dutch name: Oranje mospalpmot. Frisian name: – 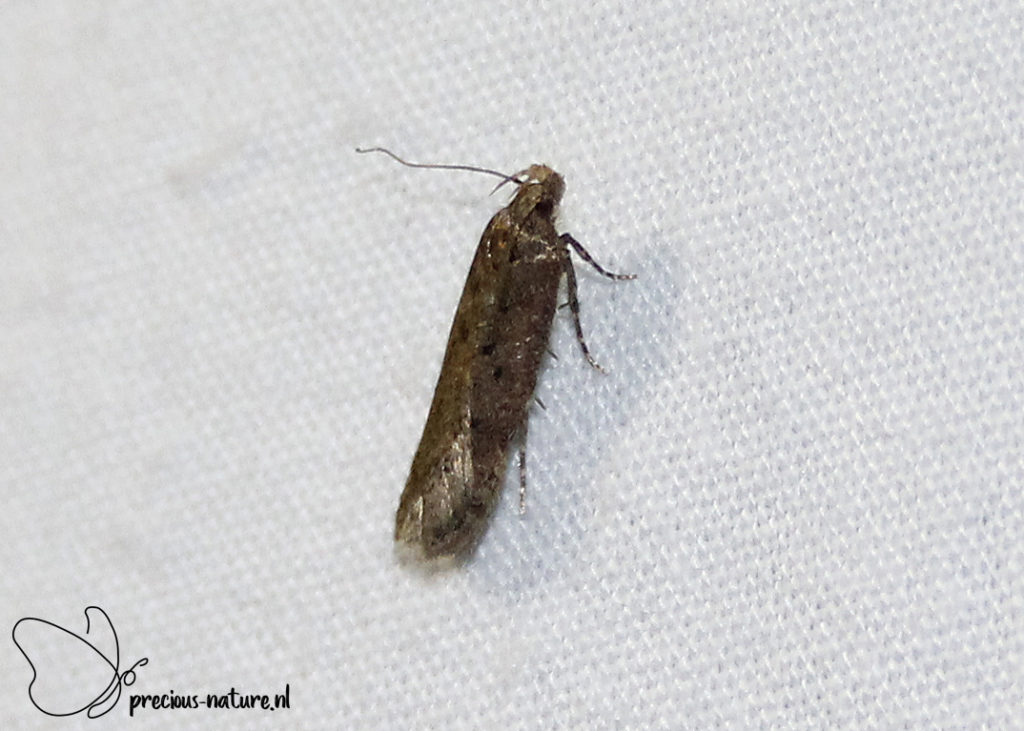 A twirler moth that is difficult to distinguish from the Dark Neb (Bryotropha affinis) and which can be better confirmed with genital examination is the Thatch Neb (Bryotropha basaltinella). The forewing is dark brown with a yellow-colored base of the scales giving this moth a speckled appearance. There are three black-brown dots on the forewing, one on a quarter, one near the outer edge on 1/3, and one on 2/3. The lack of the black dot halfway up the wing distinguishes this moth from the Dark Neb. In addition, the black dots are much larger. At the end of the forewing are yellow scales, which make a kind of transverse band visible. The wingspan is 11-12mm and the flight period is in one generation from May to September. Host plant: mosses. Dutch name: Grootvlekmospalpmot. Frisian name: – 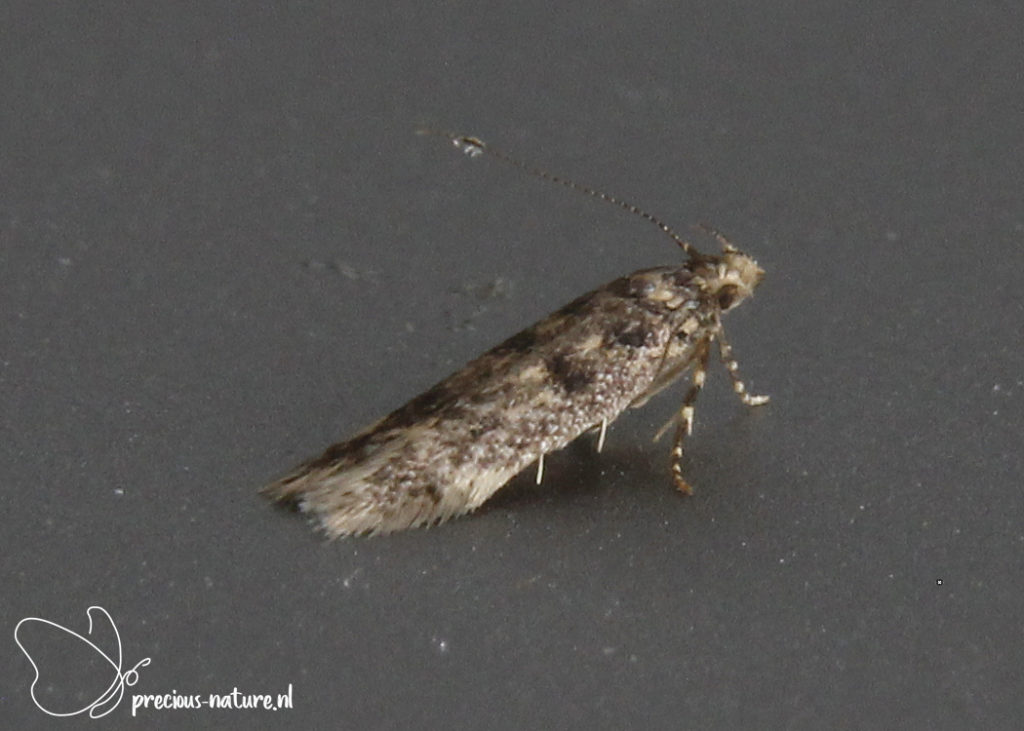 The first species of the twirler moths in my collection is the Seedhead Moth (Metzneria lapella). In my backyard, this moth was attracted to the light during a moth session. The forewing is usually sandy, sometimes darker at the base, with grey-brown veins. There is a black dot at 1/3 and halfway. This species usually occurs closer to the coast, but it is increasingly more inland. The flying period is from May to August and the wingspan is 16-20mm. Host plant: Burdock. Dutch name: Klispalpmot. Frisian name: – 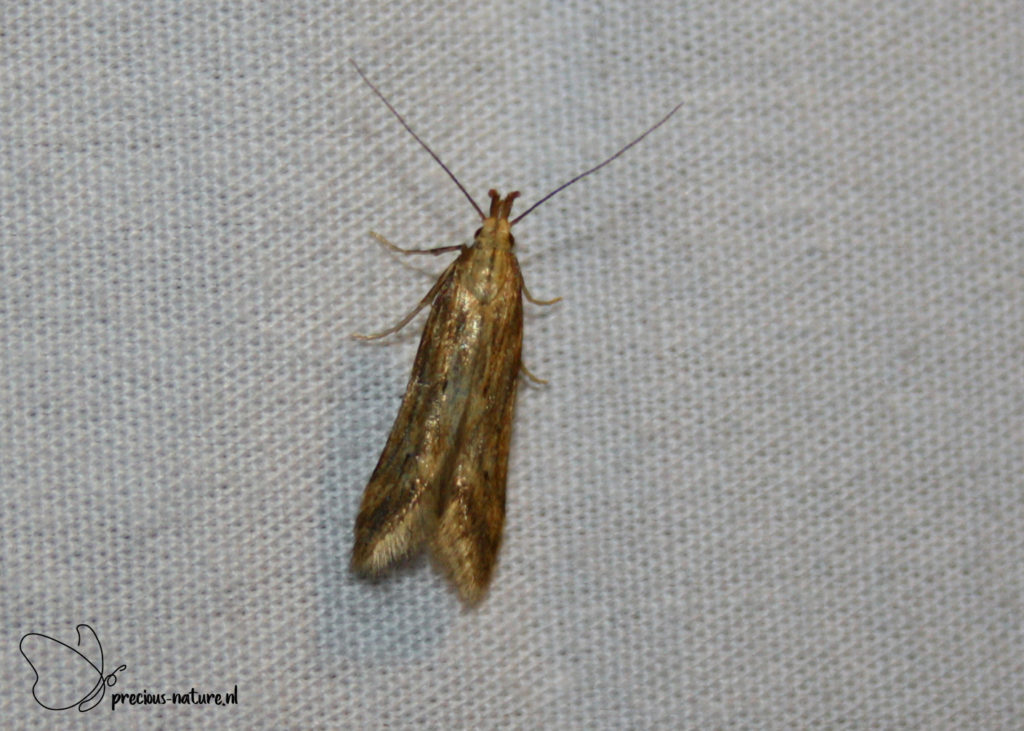 A somewhat difficult micro-moth to identify is the yellow-banded bowsprit moth (Monochroa lucidella). This brown moth has a yellow-white spot on 2/3 with a black dot at the end. Furthermore, some faint light brown spots can be seen at the base of the forewing. Remarkable are the relatively long gray fringes with yellow-white spots along the wing edge. The flying period is one generation from June to the beginning of August and the wingspan is 12-14mm. Host plant: Common Spike-rush. Dutch name: Geelbandboegsprietmot. Frisian name: – 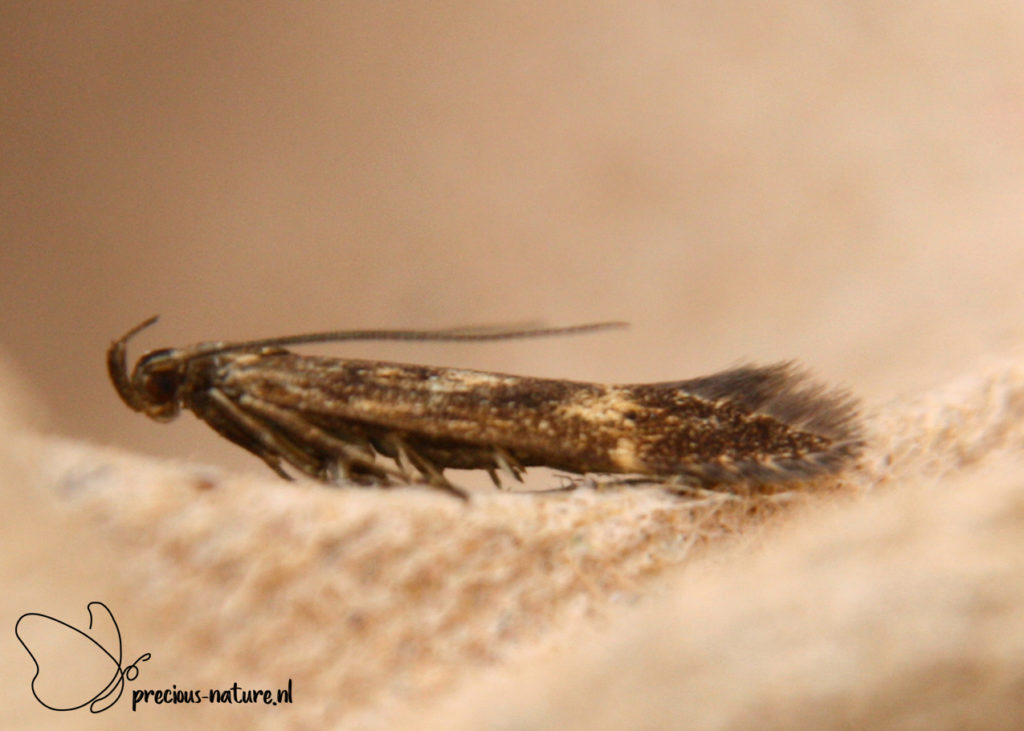 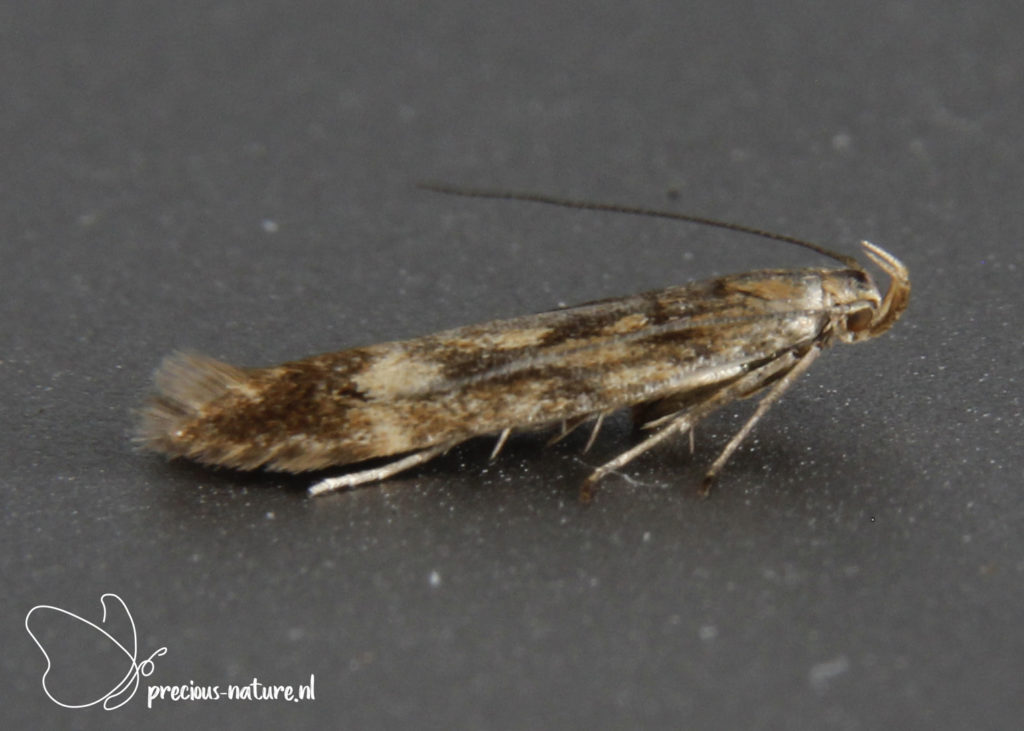 A rather dull-colored twirler moth is the Mallow Groundling (Platyedra subcinerea). The forewing is pale grey-brown with some dark spots along the length of the wing. On 1/3 and 2/3 the spots are a bit more concentrated, making it look like there is a black spot there. The flight period is in one generation from June to August and the wingspan is 16-18mm. Host plant: Common Mallow. Dutch name: Kaasjeskruidmot. Frisian name: – 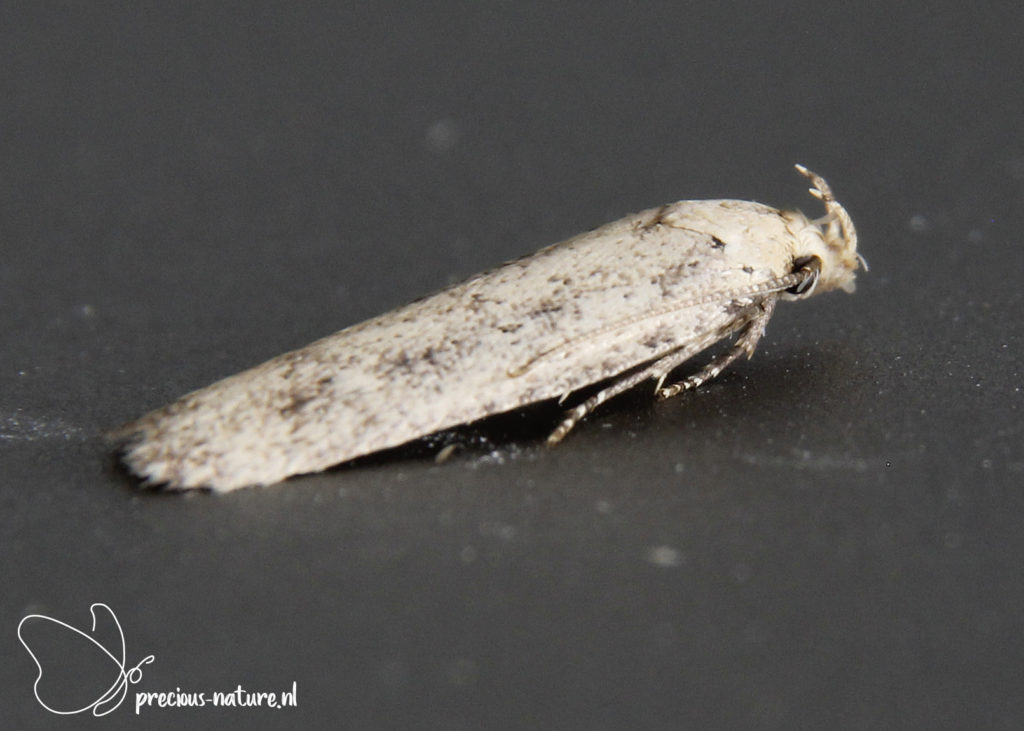 An easily recognized moth is the Juniper Webber (Dichomeris marginella) with its reddish-brown forewing and the white stripe along the leading edge from the wing base to the wingtip and the white stripe along the trailing edge to the rear edge. The palps are clearly recognizable by the long white with brown hair. In resting position, the Juniper Webber stands high on its front legs. The wingspan is 13-17mm and the flight period is in one generation from April to July. Host plant: Common Juniper. Dutch name: Jeneverbesmot. Frisian name: – 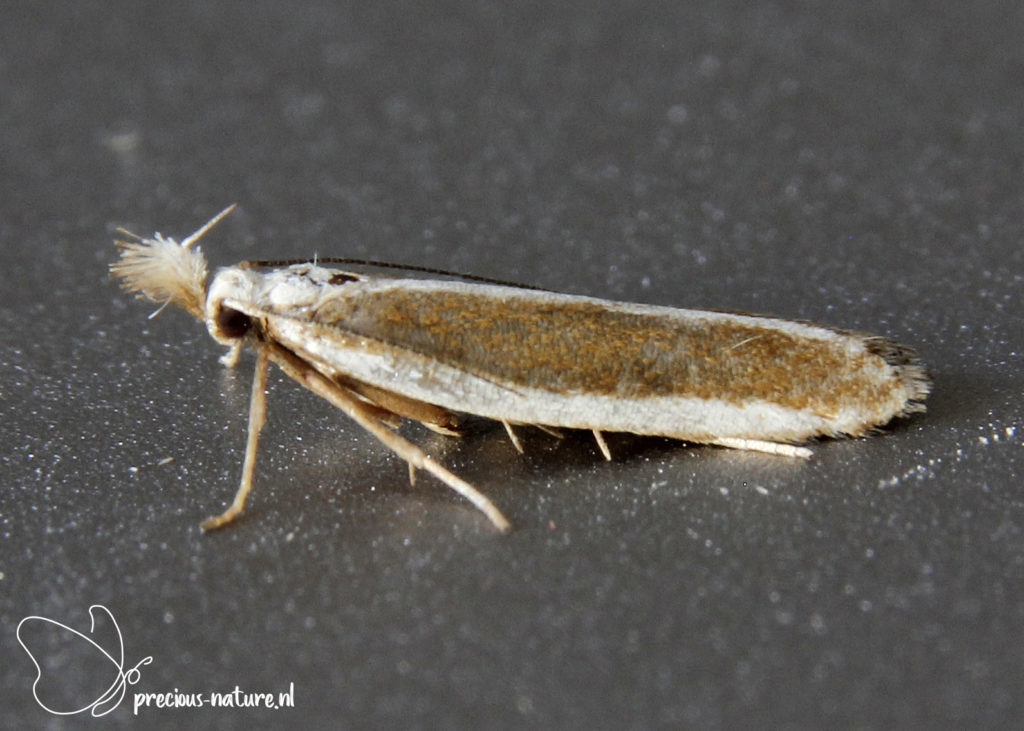