There are around 1400 species of clearwing moths (Sessiidae) worldwide, of which only 13 species are known in the Netherlands. They are small to moderately large (1.4 – 4.6 cm)  wasp-like butterflies that are protected from enemies by this resemblance. They have very narrow forewings and fairly broad hindwings with large transparent fields. The body is black with red or yellow bands. They can be distinguished from wasps by the dark band or spot on the forewing, from which a large number of veins arise. The head and eyes are also much smaller than in a wasp and on the legs are adapted tufts of hairs that sometimes have yellow scales at the ends so that they appear to be carrying pollen as bees do.

The first species of the special group of clearwing moths that I finally see is the Red-tipped Clearwing (Synanthedon formicaeformis). This type of butterflies are best seen when they are sitting still because they are easily confused with a wasp in flight. Characteristics of this diurnal moth are the red band on the abdomen and the relatively wide red field at the wing tip. The transverse band on the forewing is narrow and usually has a dark reddish-brown, sometimes lighter red color. Fresh specimens have two bands of loose yellow scales on the abdomen that disappear during the first flight and are therefore almost never observed. The tail plume is black and in fresh specimens, striking white hairs can be seen on the side. The legs are black with three white bands. The flight period is in one generation from mid-May to early August and the wingspan is 17-19mm. Host plant: Willow. Dutch name: wilgenwespvlinder. Frisian name: Wylgewespflinter. 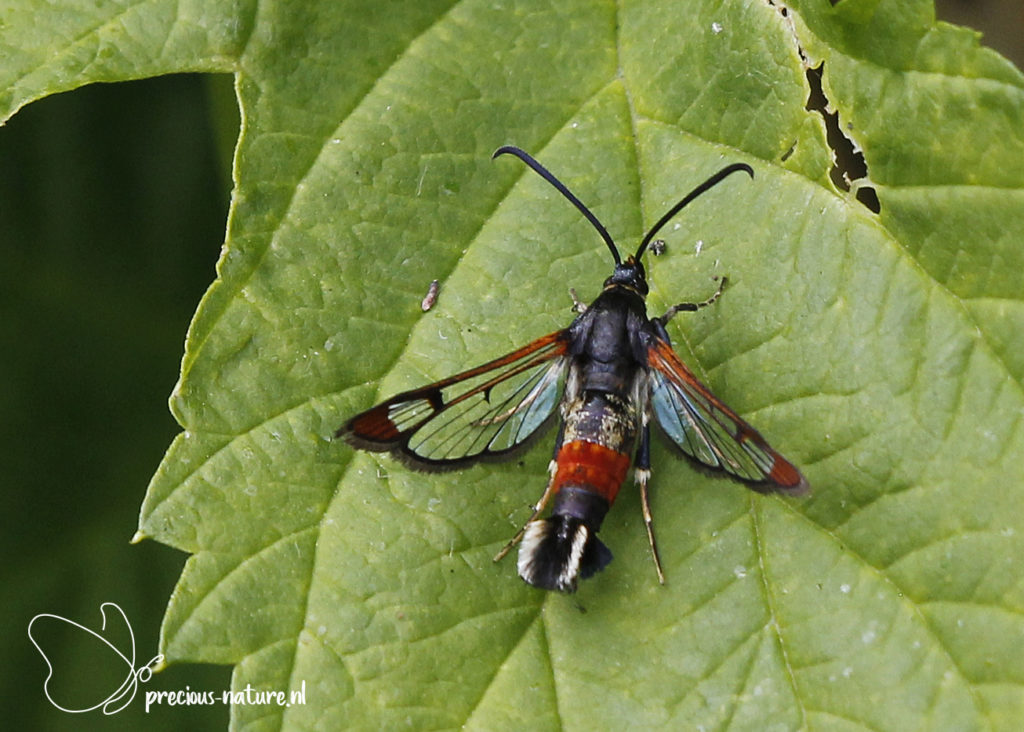