Plume Moths (Pterophoridae) are special moths in terms of shape. They have a long and slender body, the legs are also long with conspicuous branching and the wings are narrow, and together with the body in a resting position, they form a ‘T’. Characteristic is their deeply split wing, creating three parts, each with wide fringes. They are night flyers and are dull in color. They are often brown and grey with light and dark markings.

A fairly common plume moth is the Hemp-agrimony Plume (Adaina microdactyla). The forewing cleft just past halfway and is pale yellow, sometimes yellow-white, pale brown, or pale grey. At the base of the cleft in the forewing is a brown spot and on the costal lobe at the costa are two small brown spots. Although the moth is well attracted to light, during the day you can keep an eye out for feeding of the Hemp-agrimony. It is one of the smallest plume moths in Europe. The flying period is in two generations from May to the beginning of September and the wingspan is 13-17mm. Host plant: Hemp-agrimony. Dutch name: Dwergvedermot. Frisian name: – 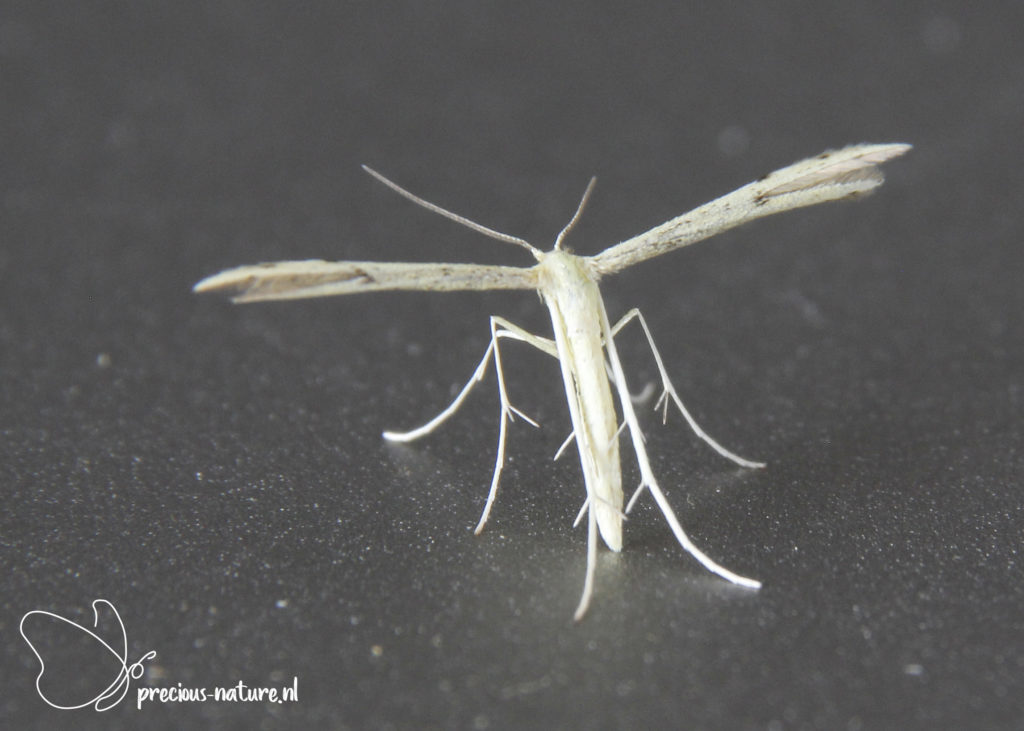 Identifying plume moths is always a challenge. The Beautiful Plume (Amblyptilia acanthadactyla) is still fairly recognizable. The forewing is split from 2/3 and reddish-brown lightly speckled. Just before the split of the wings, a dark triangle is visible close to the costa. The apex is slightly darker with a distinct light transverse streak. On the thorax you can see two white V-shapes pointing towards the head. The part of the abdomen just in front of the wings is light-colored with a very thin slightly dark streak. The flying period is from June to September and the wingspan is 17-23mm. Host plant: Large range of plants. Dutch name: Scherphoekvedermot. Frisian name: –

The Morning-glory Plume Moth (Emmelina monodactyla) is one of the common plume moths in the Netherlands. The wings are split, but that is difficult to see as it has rolled its wings closed when resting. The color of the wing is pale brown and along the length of the body is a lighter band with a row of dark dots. The flight time is in two generations from March to October and the wingspan is 18-27mm. Host plant: Bindweeds. Dutch name: Windevedermot. Frisian name: – 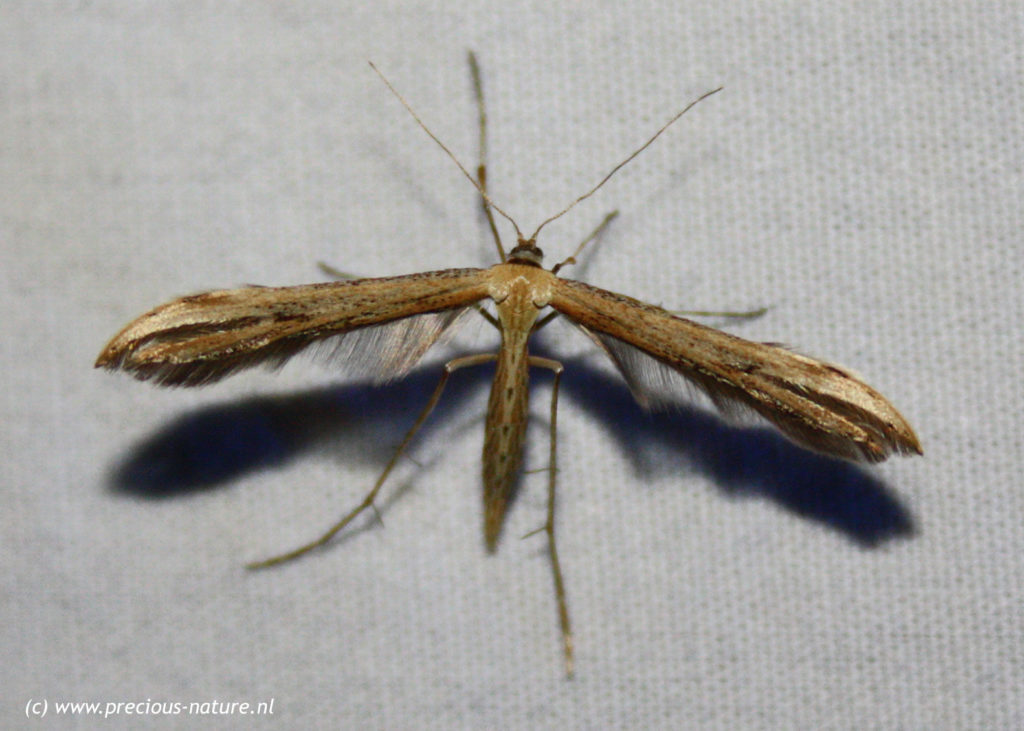 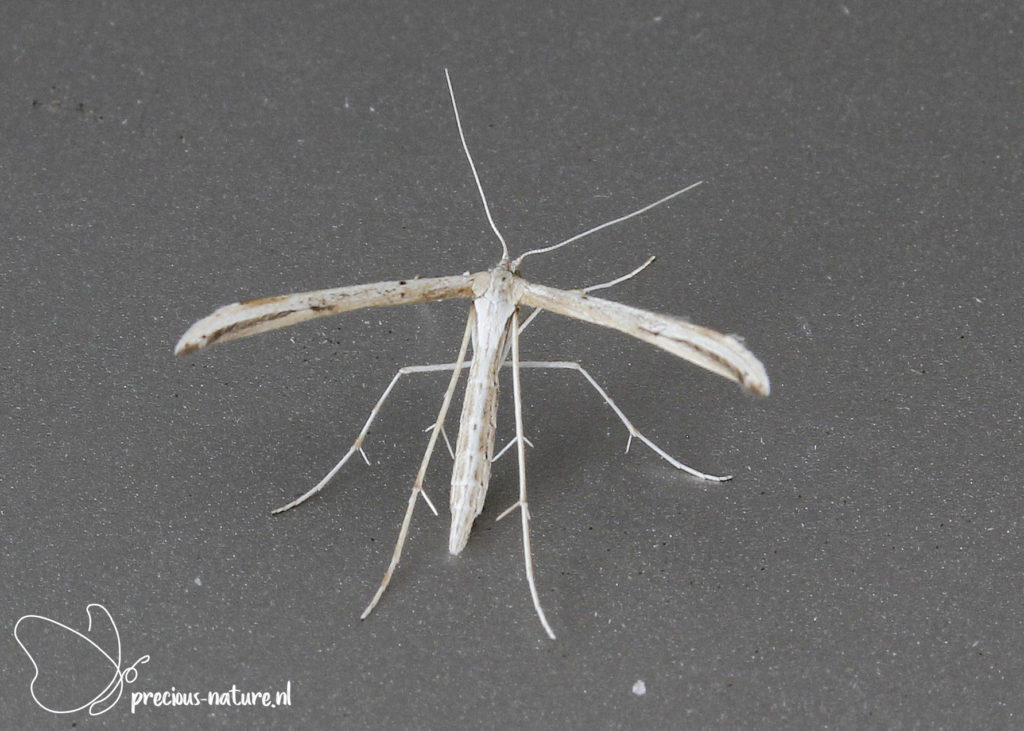 The Yarrow Plume (Gillmeria pallidactyla) has a brown band on the hind legs. The moth is brownish-white with a distinct dark spot on the forewing at the costa halfway down the wing. The flight period of this night kite is from June to August and the wingspan is 23-27mm. Host plant: Tansy and Yarrow. Dutch name: Lichte zandvedermot. Frisian name: – 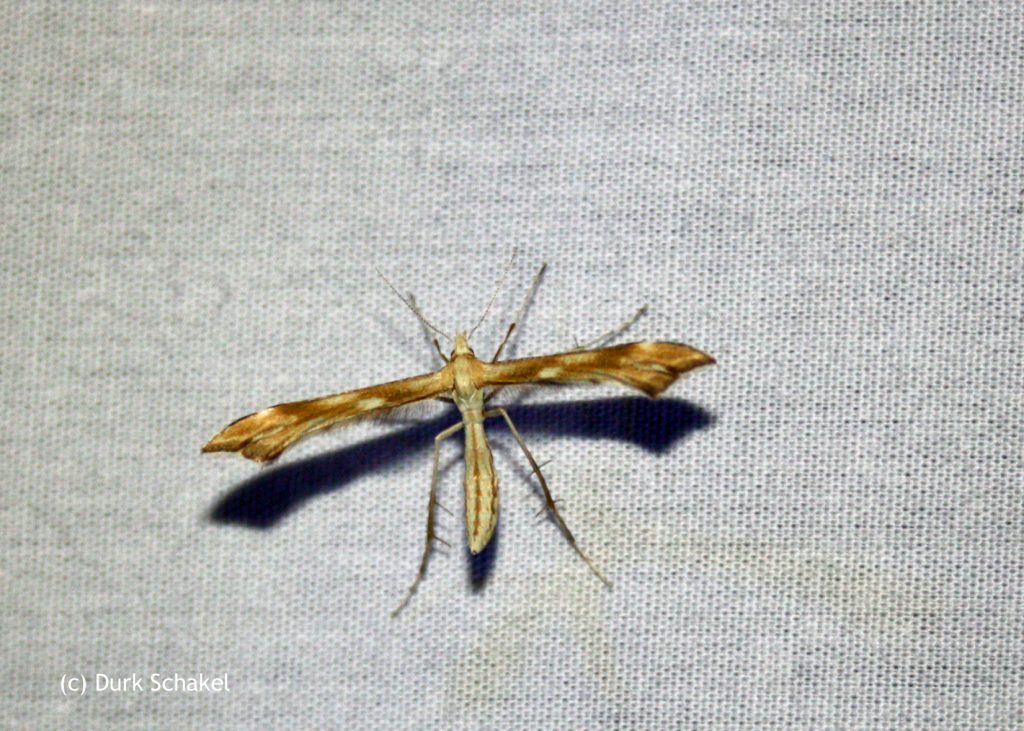 The most striking thing about the Triangle Plume (Platyptilia gonodactyla) is the dark brown triangle just above the cleft of the wing that starts at 3/4. Near the apex, close to the costa, a light brown spot can be seen, which sometimes extends to the dorsum. The thorax is conspicuously white at the top and passes through a narrowing into the wider brown abdomen. The flight period is in two generations from May to August and the wingspan is 20-30mm. Host plant: Colt’s-foot. Dutch name: Hoefbladvedermot. Frisian name: – 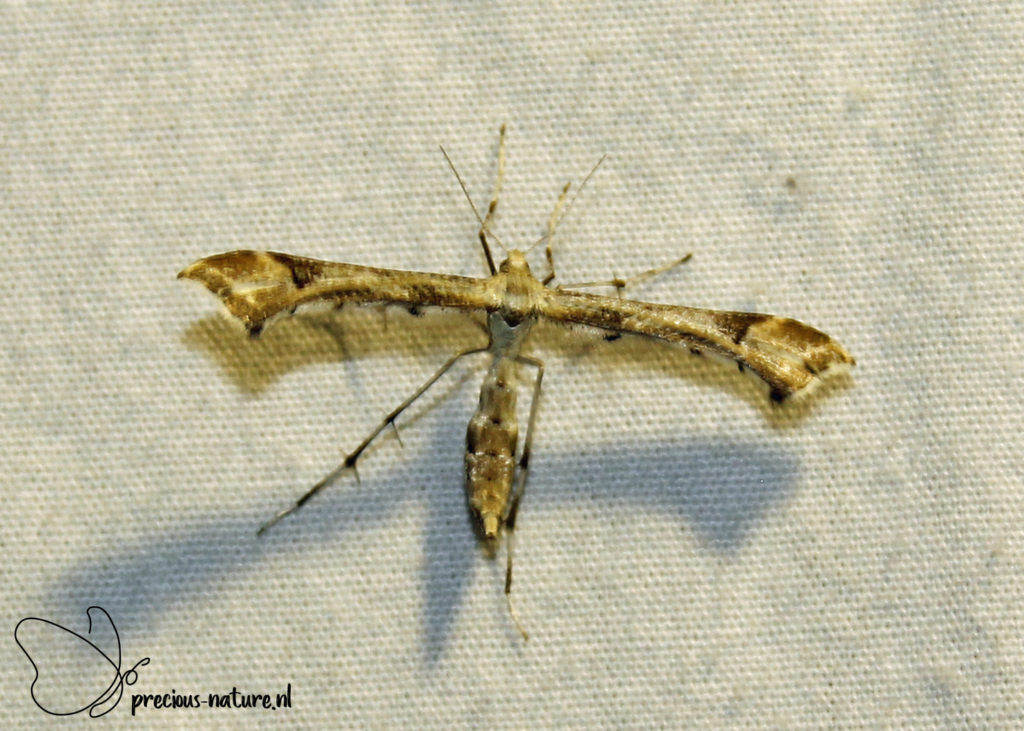 The White Plume Moth (Pterophorus pentadactylus) is also called the Five-fingered Plume Moth. It is an all-white moth with wings that resemble five feathers on either side. The hindwing is split in three and the forewing in two parts. The flying period is from May to August in two generations and the wingspan is 26-34mm. Host plant: Bindweed. Dutch name: Sneeuwwitte vedermot. Frisian name: – 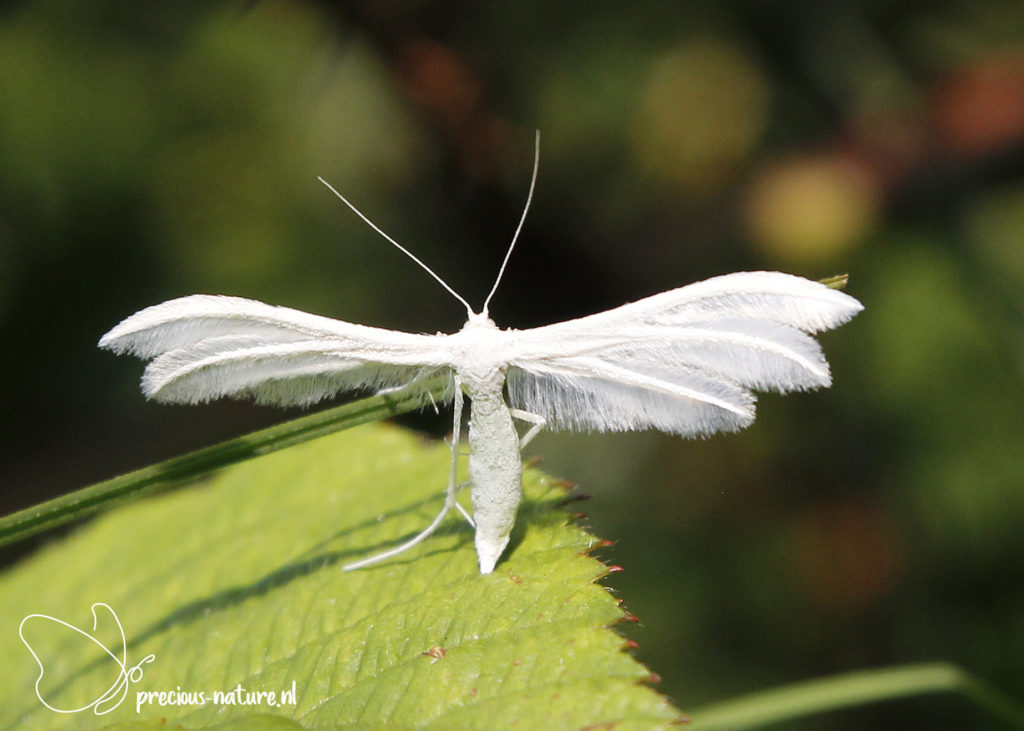 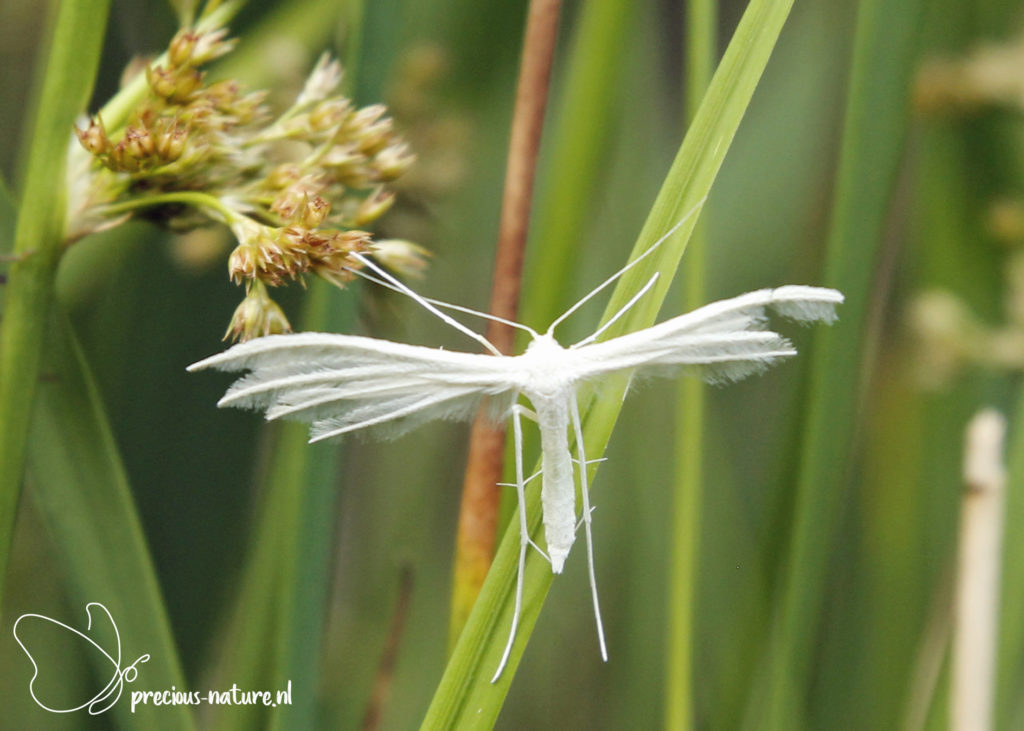 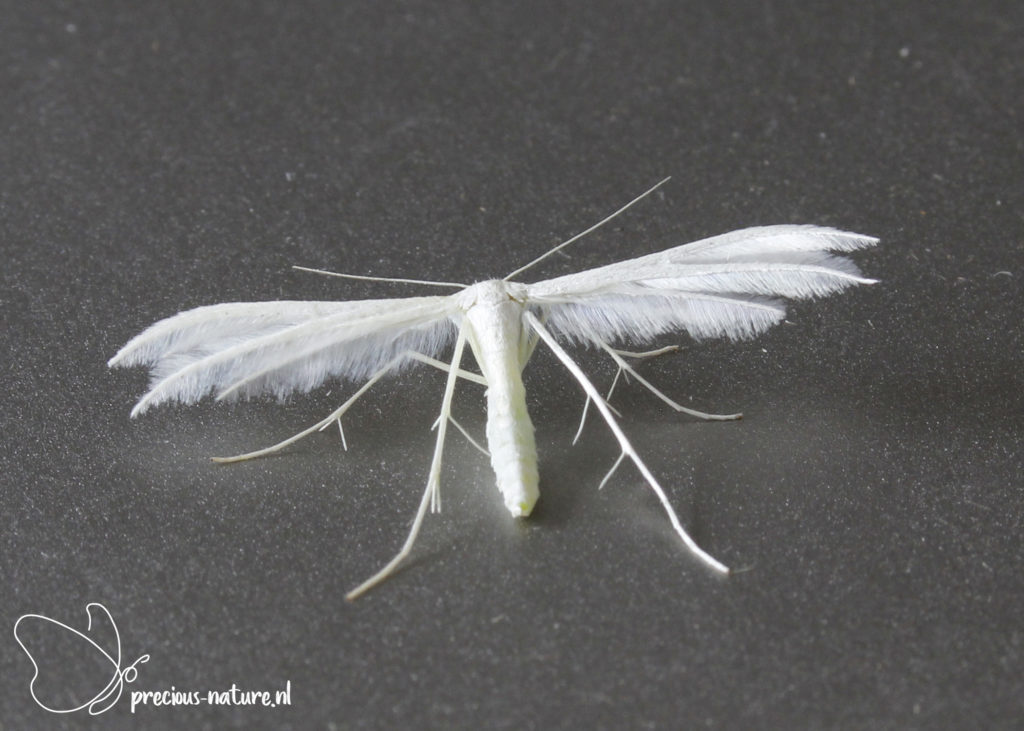