Hairstreaks (Theclinae), a subfamily of the Gossamer-wing butterflies (Lycaenidae), often have a small tail at the inner edge corner of the rear wing. The most important features for determination are on the underside of the wings, especially the hindwing. On the underside is a characteristic, fine and white marking, a hairstreak. Furthermore, they are sometimes difficult to find, because they often reside above in bushes or trees.

The Green Hairstreak (Callophrys rubi) is a butterfly that flies in one generation from late April to mid-July. The wings are closed, except in flight, showing only the green underside with its faint white streak. The extend of this white marking is very variable. It is frequently reduced to a few white dots and maybe almost absent. The top is dark brown and the eyes rimmed white. The wingspan is 27-34mm. Host plant: Common Rock-rose, Bird’s-foot, Corse, Broom, and Dyer’s Greenweed. Dutch name: Groentje. Frisian name: Grienjurkje. 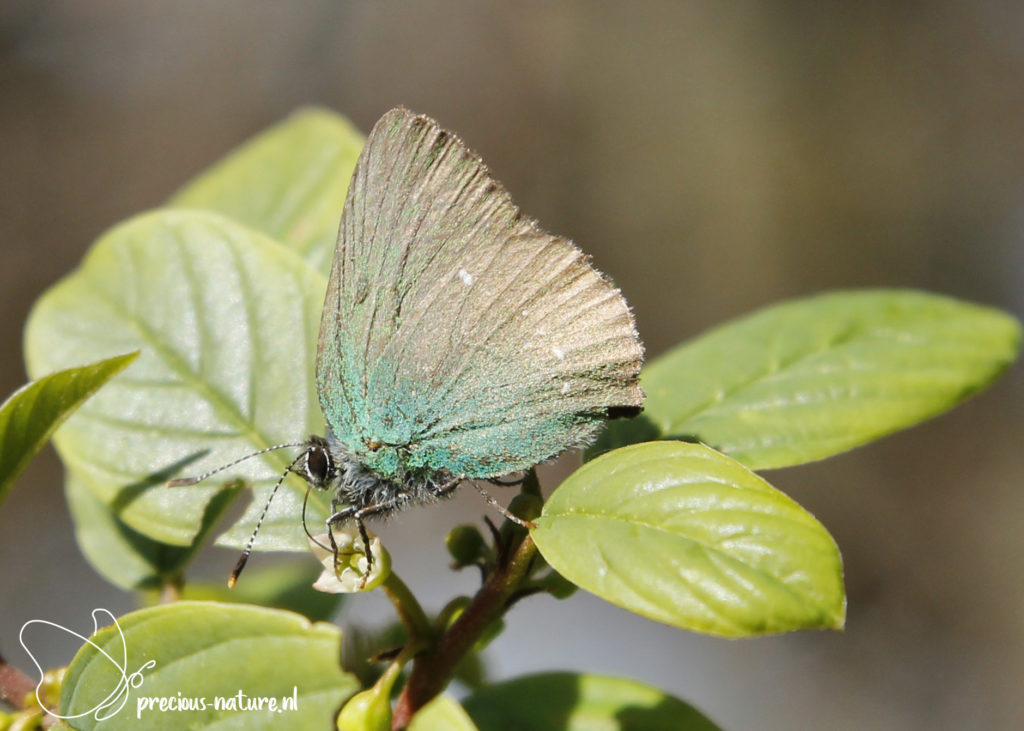 The Gold-bordered Hairstreak (Rekoa palegon) is a hairstreak that occurs in the North of South America. I spotted this butterfly in Medellin (Colombia). The underside of the wing is grey with a pattern of orange-brown irregular lines and an orange-brown termen. The top is brownish with a blue sheen at the base of the wings. In the male, the blue color is more present. This hairstreak owes its name to that orange-yellow termen. Host plant: Aster. Dutch name: Goudgerande page. Frisian name: – 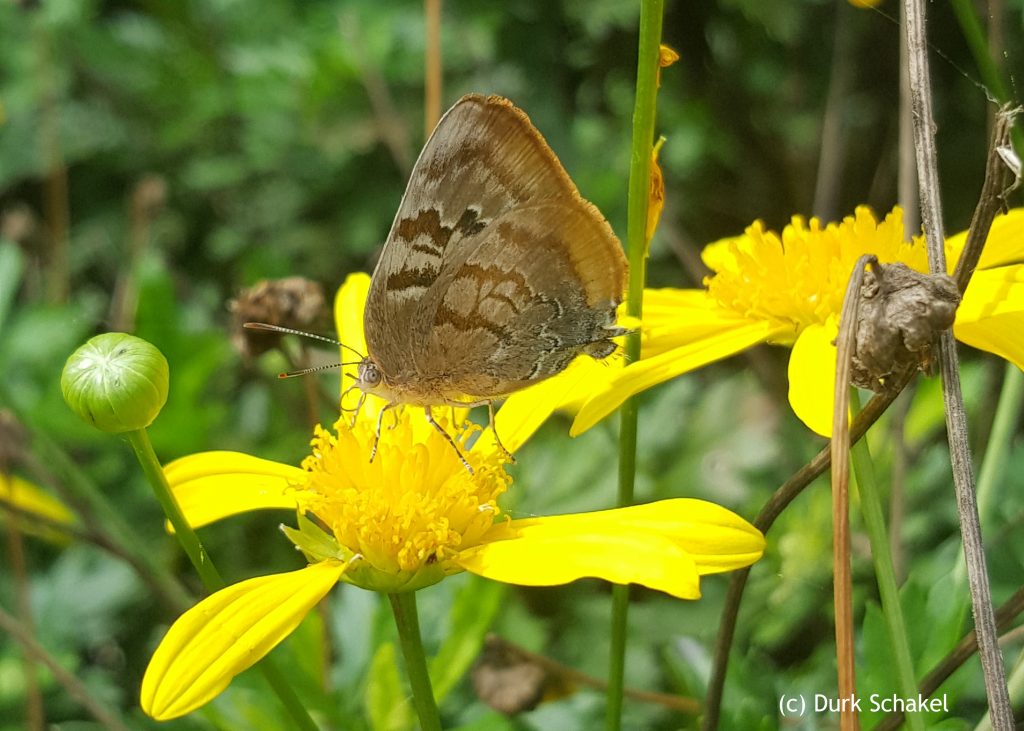 The Purple Hairstreak (Favonius quercus) is a butterfly that flies in one generation from the beginning of July to the end of August. Distribution is throughout areas wherever there are oaks. It is frequently overlooked as adults remain largely in the canopy where the main food source is honeydew. The butterfly is fairly easy to identify, with the blue-purple shine on the fore- and hindwing of the male being particularly noticeable. The female shows only a blue-purple spot on the forewing. The underside of the wing is blue-grey with a double crossband, white-black, close to the marginal area. The hindwing has a small tail and two orange stains, one with a black dot in it. The wingspan is 37-39mm.  Host plant: Sessile Oak and Pedunculate Oak. Dutch name: Eikenpage. Frisian name: Ikepaazje. 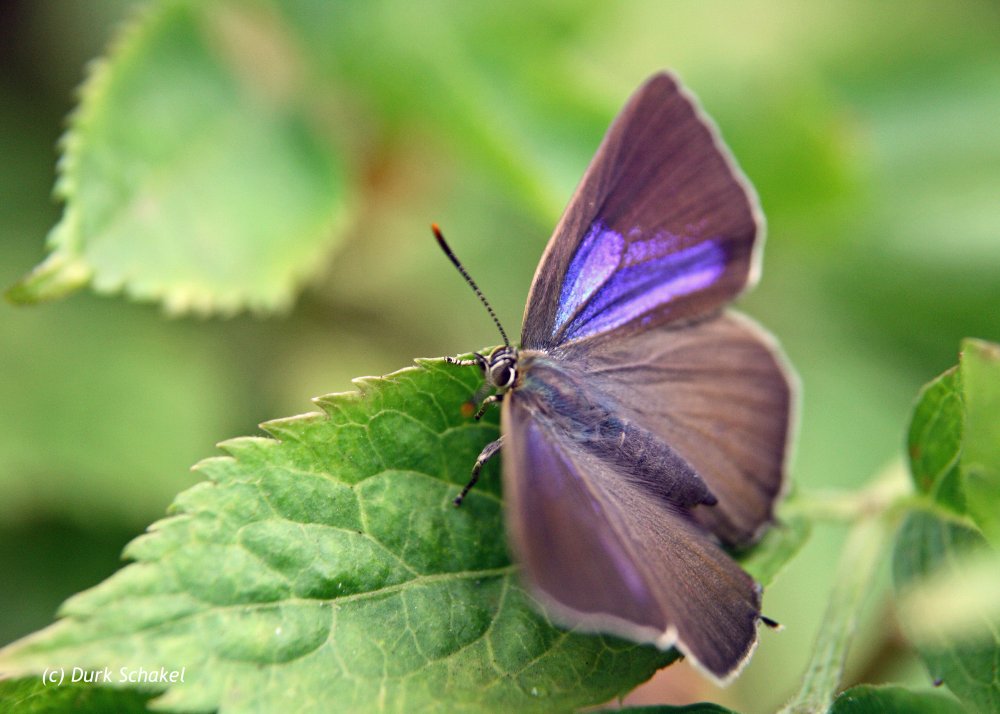 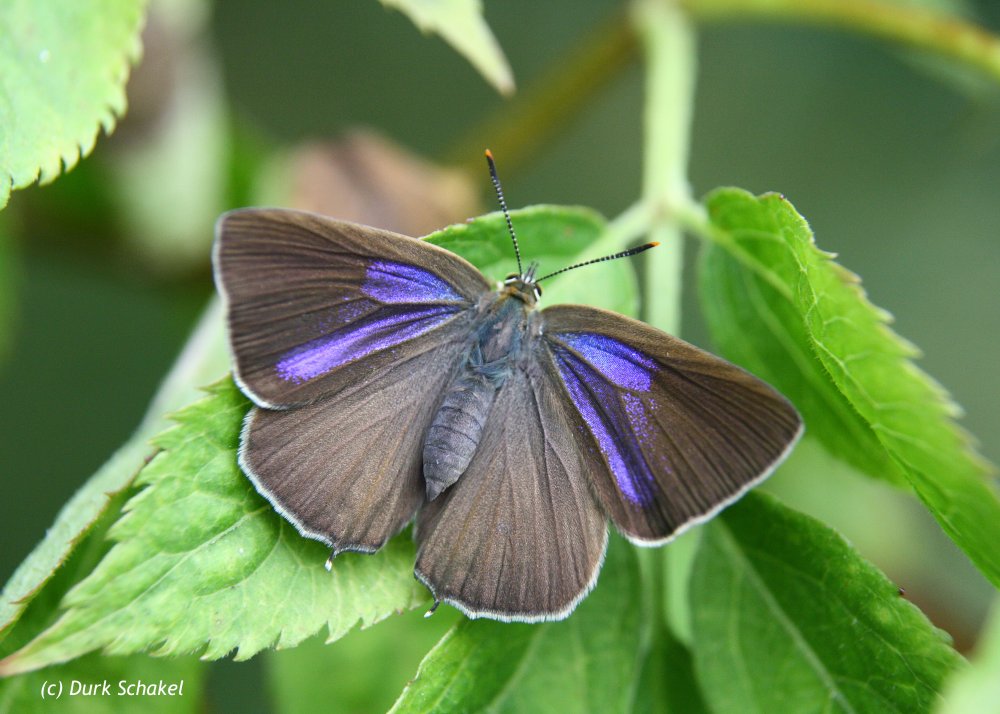 The Brown Hairstreak (Thecla betula), like the Purple Hairstreak (Hypaurotis quercus), is often found in the tops of the trees. This hairstreak is hardly seen in the North of the Netherlands. During my holidays in France, in the Vendée, I came across this beautiful orange butterfly for the first time. The top of the wing is dark brown. The female has a large, prominent kidney-shaped orange spot on the forewing. The underside of the wing is light brown to orange with an orange band across the hindwing along the termen. Striking are the two white cross lines on the underside of the hindwing, the innermost of which runs from the costa to the middle of the wing. Between those white thin lines is a dark orange band. On the hindwing, there is a rather large, striking tail. The wingspan is 38-40mm and the flying period is in one generation from July to October. Host plant: Blackthorn. Dutch name: Sleedoornpage. Frisian name: Krikelbeampaazje. 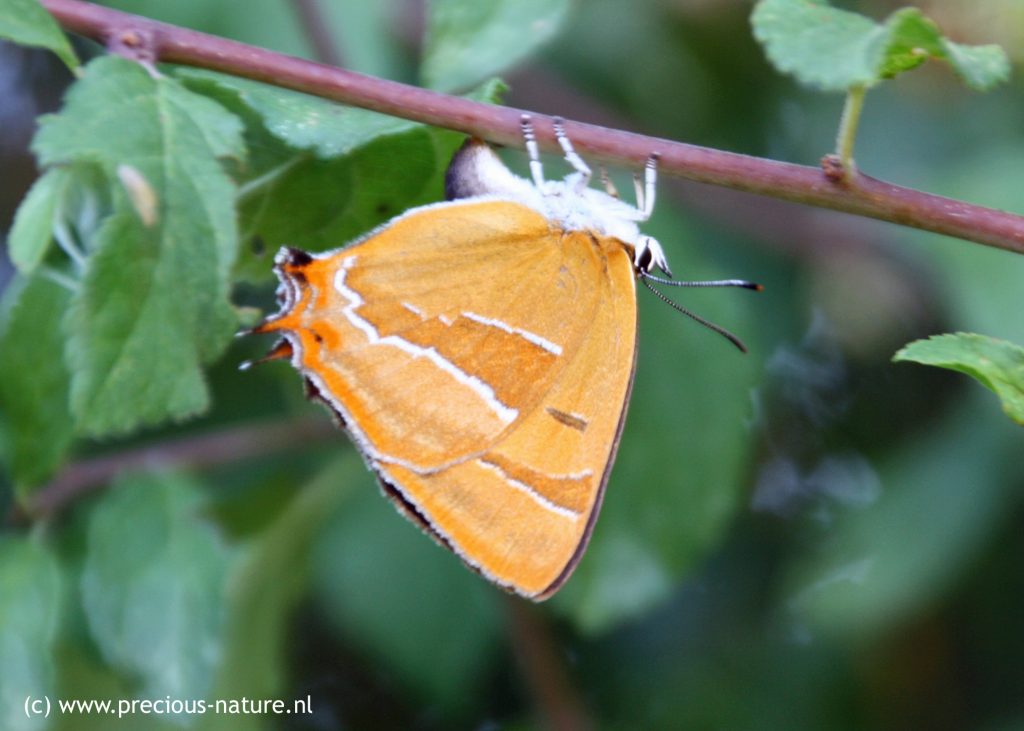