The Leaf Blotch Miner Moths (Gracillariidae) hold the wings in a resting position in roof shape at a steep angle. All species are small or very small with a forewing length of 2 – 8.5 mm. They have a well-formed tongue and long antennas. The front legs are longer so that they stand on a raised leg. The main characteristic of this family is that they have two metamorphoses. The larvae hatching are legless and very flattened. At this stage, they mine in the epidermis of the plant. After a few molts, the larva develops legs and a cylindrical body. After another few molts, the pupal stage follows and then the transition to a moth.

With its pale reddish-brown forewing with purple reflections, the Yellow-triangle Slender (Caloptilia alchimiella) is easy to recognize. Sometimes it is still confused with the New Oak Slender (Caloptilia robustella). A yellow triangular spot is visible halfway down the costa which extends along the costa. The flying period in one generation is from May to August and the wingspan is 10-13mm. Host plant: Oak. Dutch name: Goudvleksteltmot. Frisian name: – The underside of the palp of the Feathered Slender (Caloptilia cuculipennella) is slightly tufted. The forewing color is whitish with brown markings usually showing as three incomplete transverse lines. Especially the transverse line on 1/3 of the wing is most noticeable. The fringes are alternately colored white and brown and the Feathered Slender stands high on its front legs when resting. The wingspan is about 12mm and the flight period is in one generation from September to May. Host plant: Privet and Ash. Dutch name: Grauwe steltmot. Frisian name: – 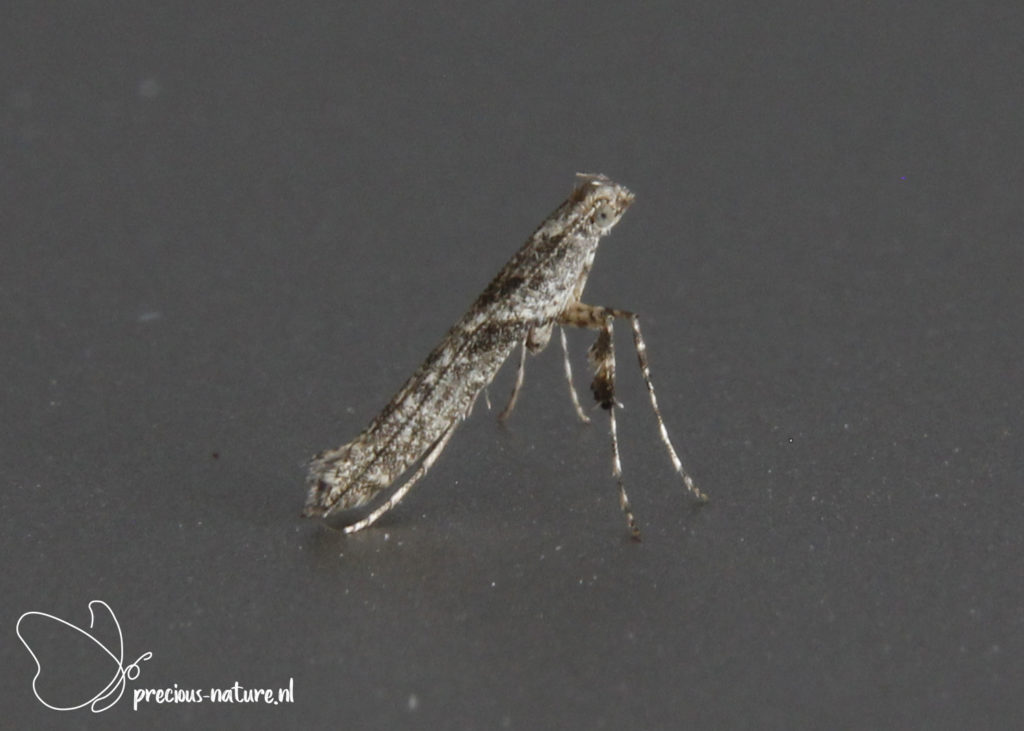 A clear example that some of the smaller moths are the most beautiful certainly applies to the Beech Midget (Phyllonorycter maestingella). This small moth has an intricate pattern of orange-brown, white, and black, and is easily overlooked. The name ‘folding moth’ refers to the mines that the larvae make in a leaf and that look like folds. The flying period in one generation is from April to June and the wingspan is 7-9mm. Host plant: Beech. Dutch name: Beukenvouwmot. Frisian name: – 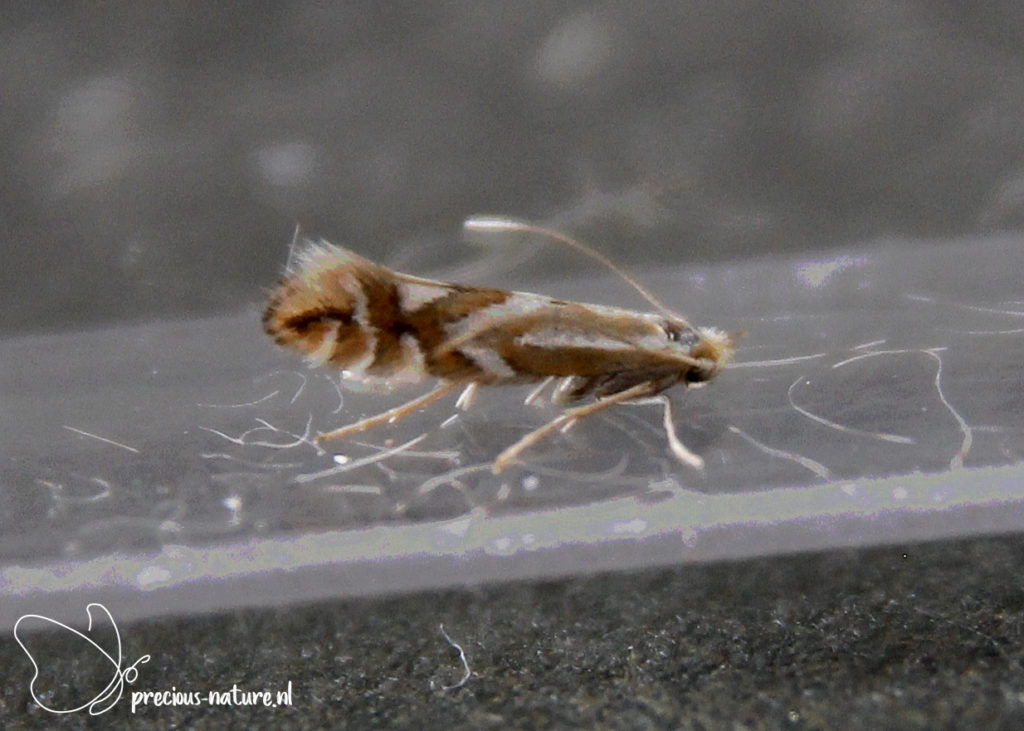 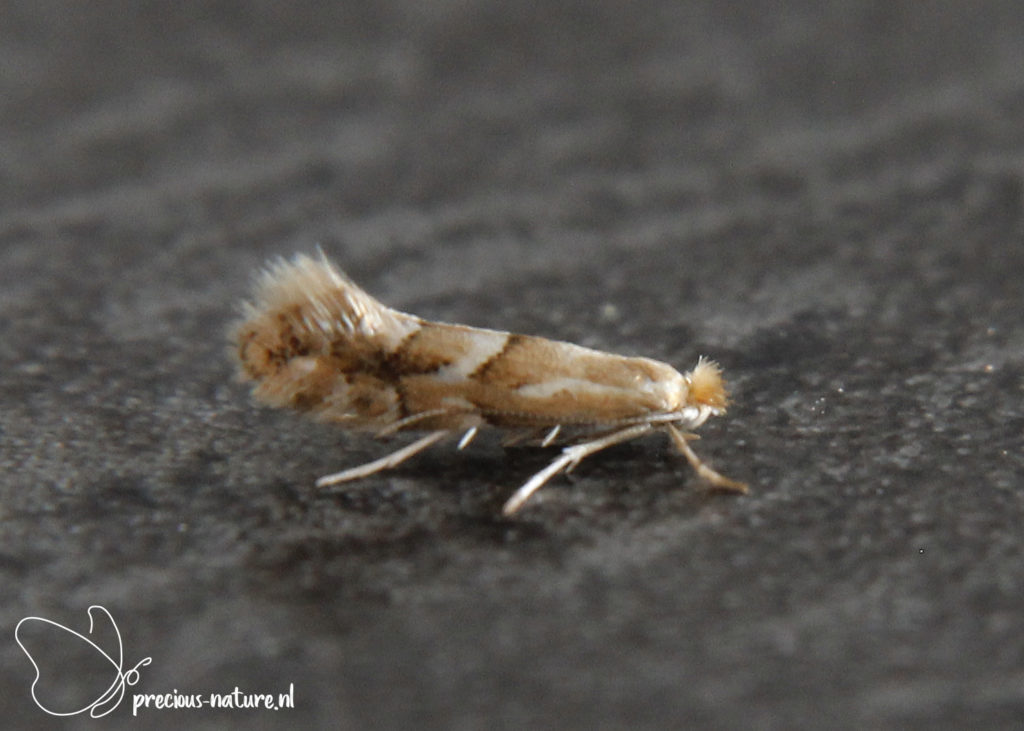 I increasingly catch micro moths with small plastic boxes to identify them at home and to take a good photo. The White Oak Midget (Phyllonorycter harrisella) is also one of them. The forewing is elongated predominantly white and closer to the apex pale orange-brown. Three thin brown lines run diagonally from the costa and two thin brown stripes from the dorsum towards the tip of the wing. A black dot can be seen at the apex. The flight period is in two generations from April to June and from July to September. The wingspan is 7-9mm. Host plant: Oak. Dutch name: Witte eikenvouwmot. Frisian name: – 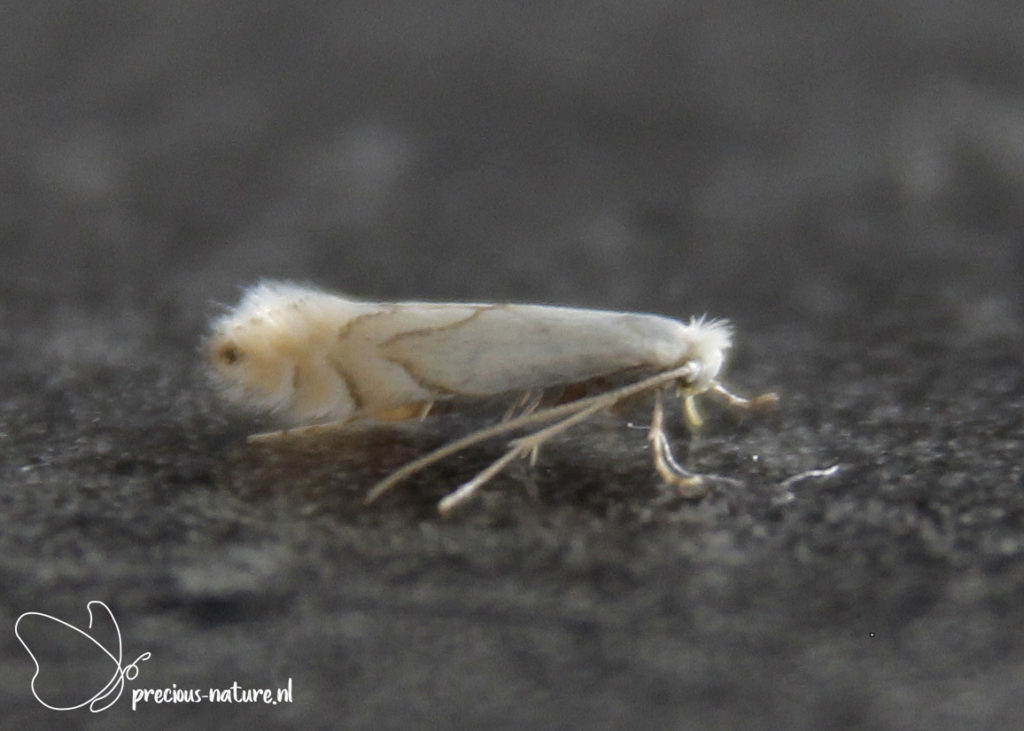