Burnets (Zygaenidae) are diurnal moths of which only a few species occur in Europe. These butterflies are poisonous due to the presence of hydrocyanic acid and therefore have a bad taste for enemies, such as birds, bats and spiders. The antennae are often toothed or club-shaped. The adult butterflies vary in size and have a well-developed tongue and often visit flowers for nectar. The wings vary widely in shape and are often metallic in color. The Zygaenidae have two subfamilies for which I spotted specimens, the Zygaeninae (drops of blood) and the Procridinae (metal butterflies).

The most common type of metal butterflies in the Netherlands is the Forester (Adscita statices). The forewing is metallic green, sometimes bluish, and the hindwing is light brown-grey. The abdomen is red or green with a metallic sheen. Here the Forester differs from the Blackthorn Aurora Moth (Rhagades pruni) which has a black abdomen. The male has slightly larger, wider and more sprung antennae than the female. The flying period is in one generation from mid-May to early August. Host plant: Sorrel. Dutch name: Metaalvlinder. Frisian name: Metal flinter. 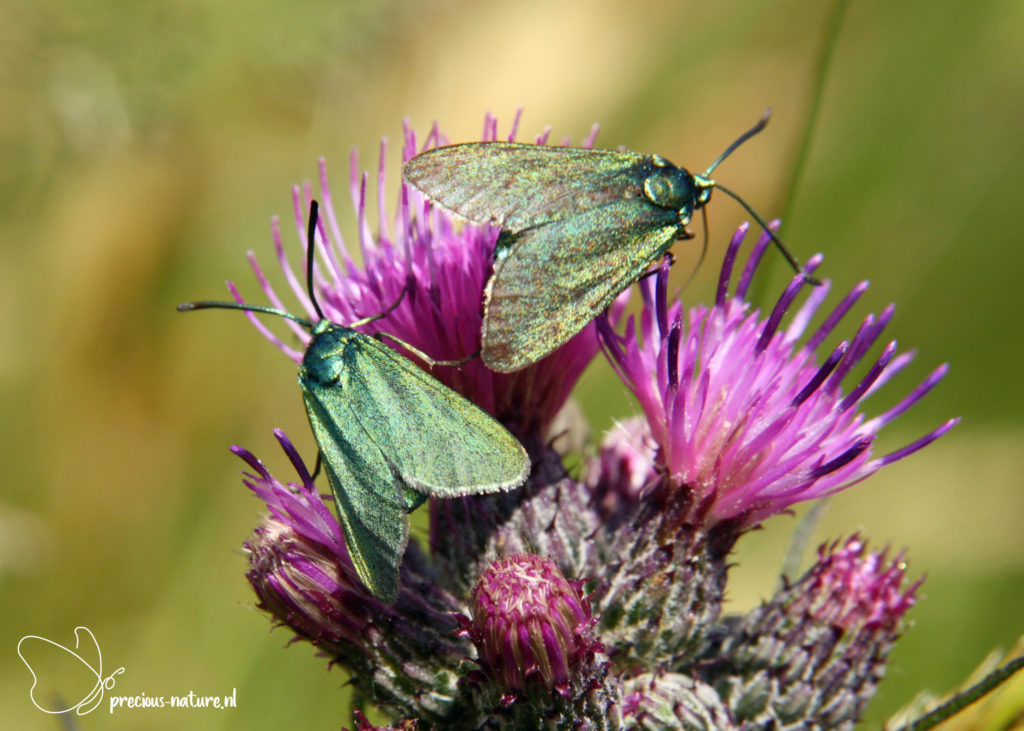 The Blackthorn Aurora (Rhagades pruni) is a very active small butterfly during the day. The forewing is brown-black with the female mainly having a weak green metallic glow. The hindwing is dark grey. The flight time is from June to August in one generation. Host plant: Common Heather. Dutch name: Bruine metaalvlinder. Frisian name: Brúne metal flinter. 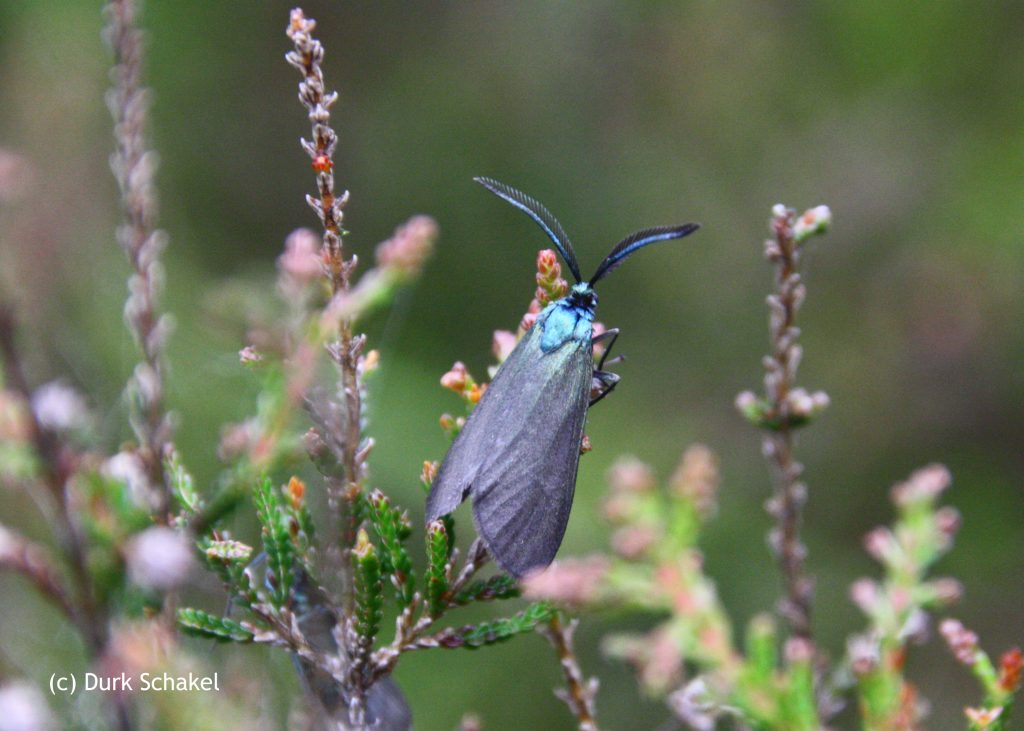 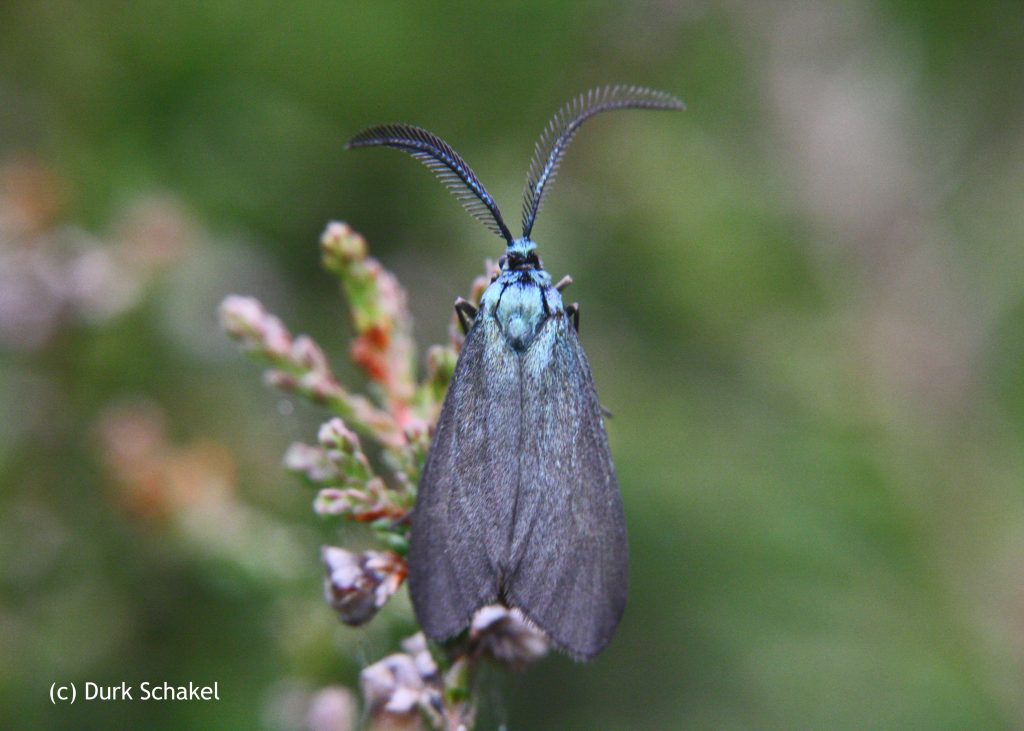 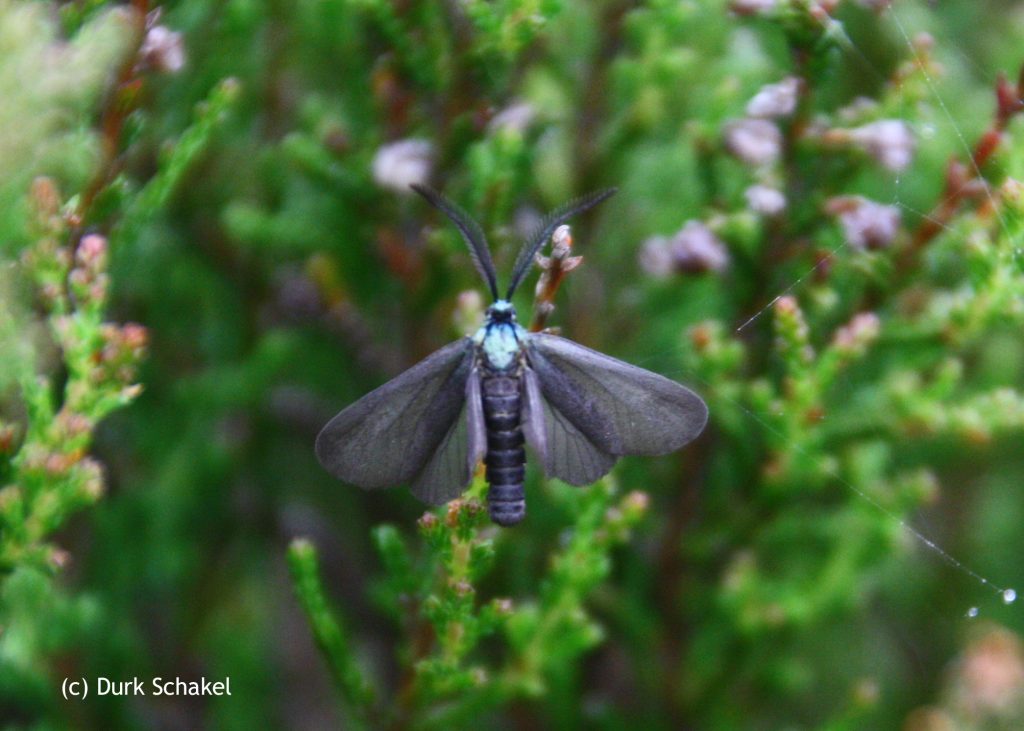 The Six-spot Burnet (Zygaena filipendulae) is a butterfly with six red spots on the forewing. The red spot at the base is separated by a vein and care must be taken for identification. Rarely, the red color is replaced by yellow. The ground color of this butterfly is blue-grey. The flight time is in one generation from May to September. He flies with a usually slow buzzing flight during sunshine and is mainly attracted to a range of flowers including thistles. Host plant: Common Clover, Bird’s-foot and Trefoil. Dutch name: Sint-jansvlinder. Frisian name: Sint-jansflinter. 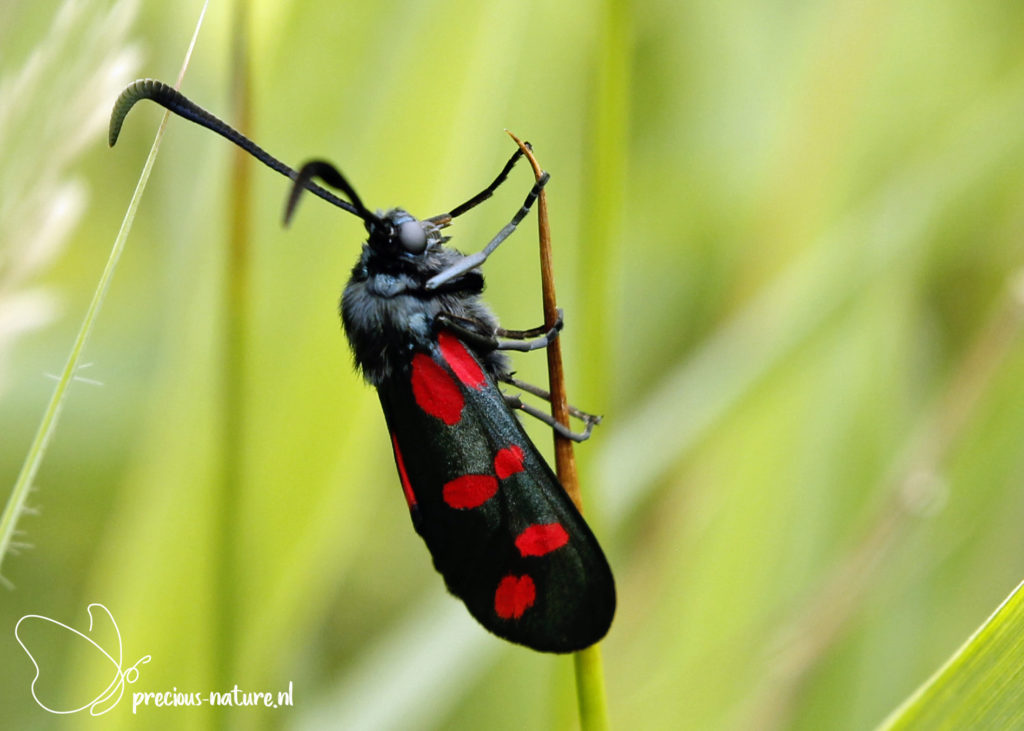 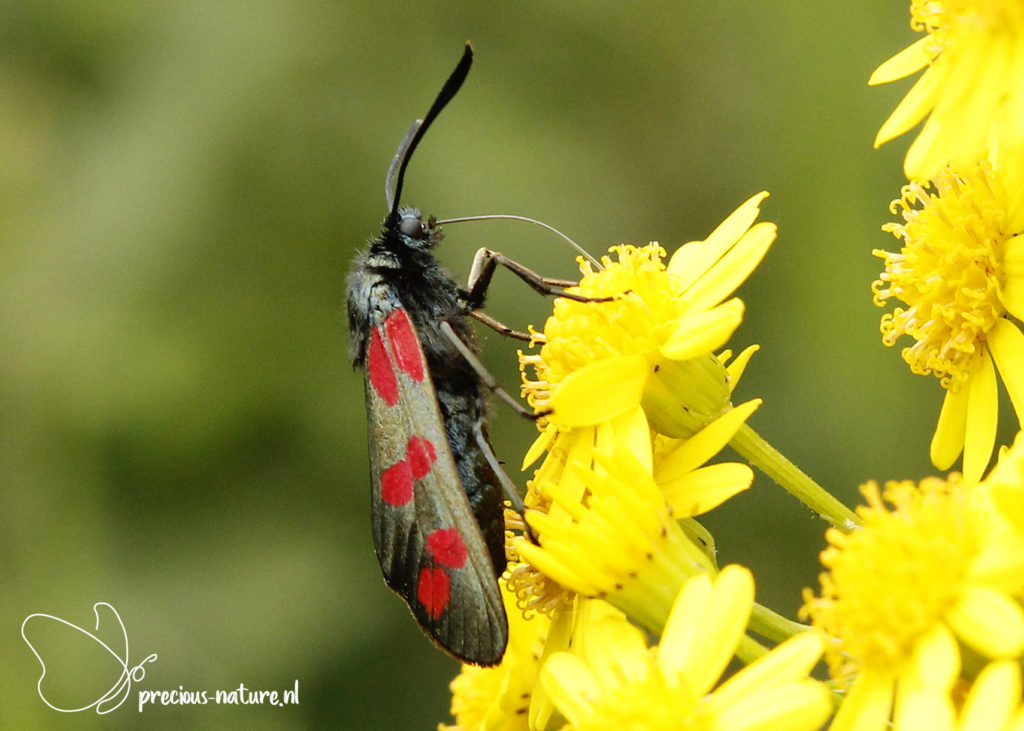 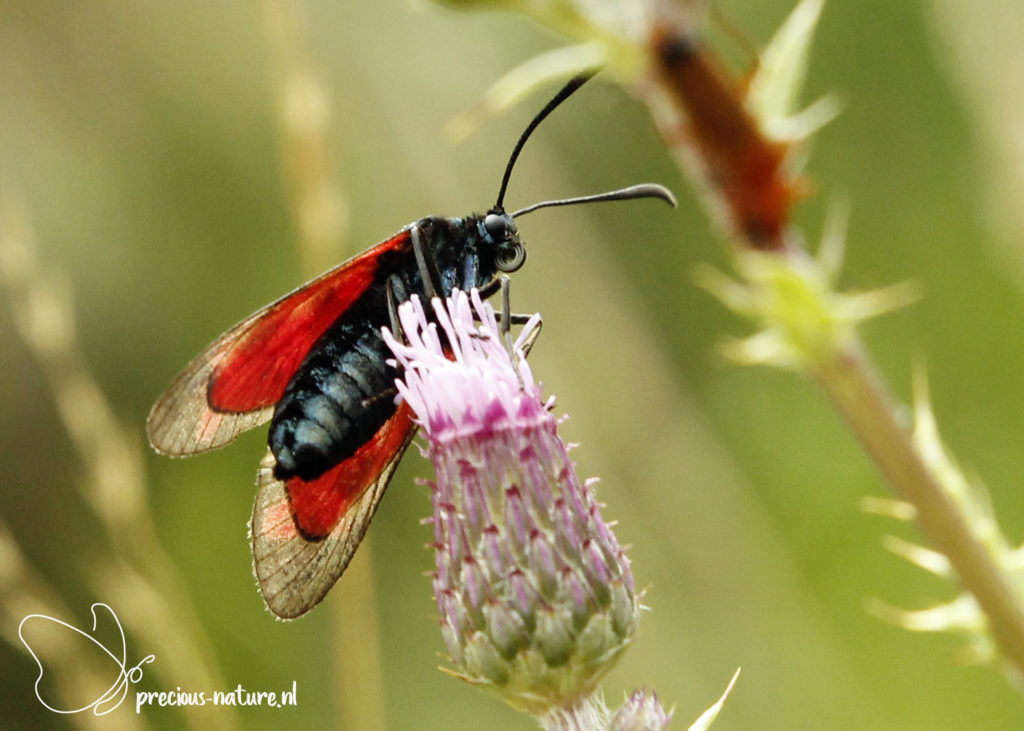 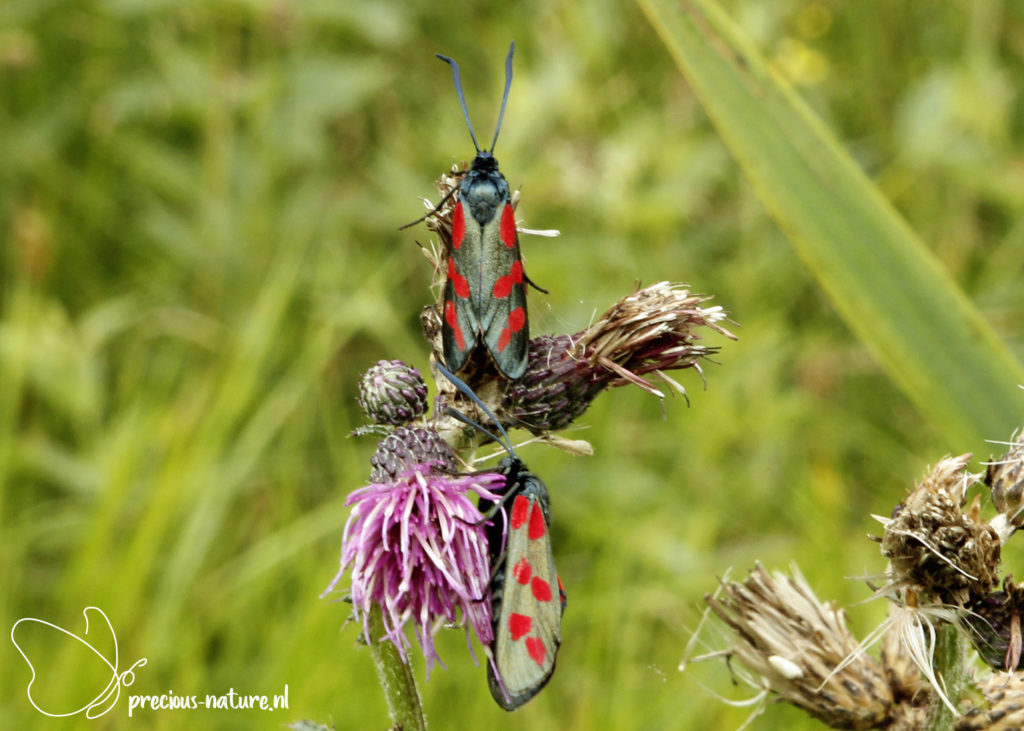 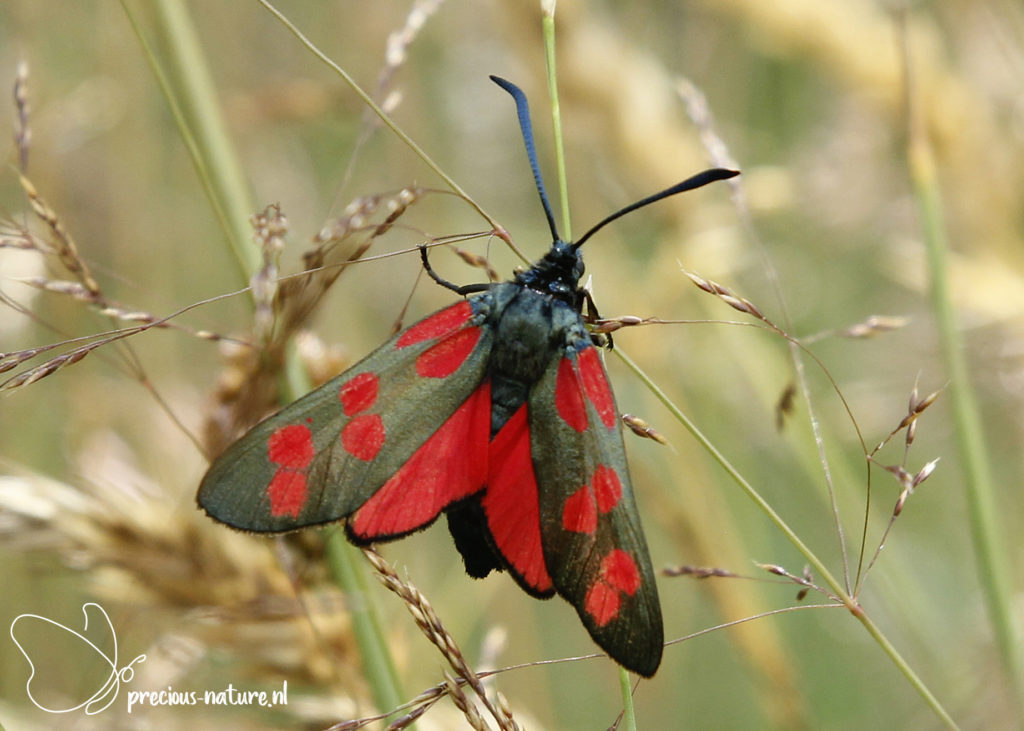 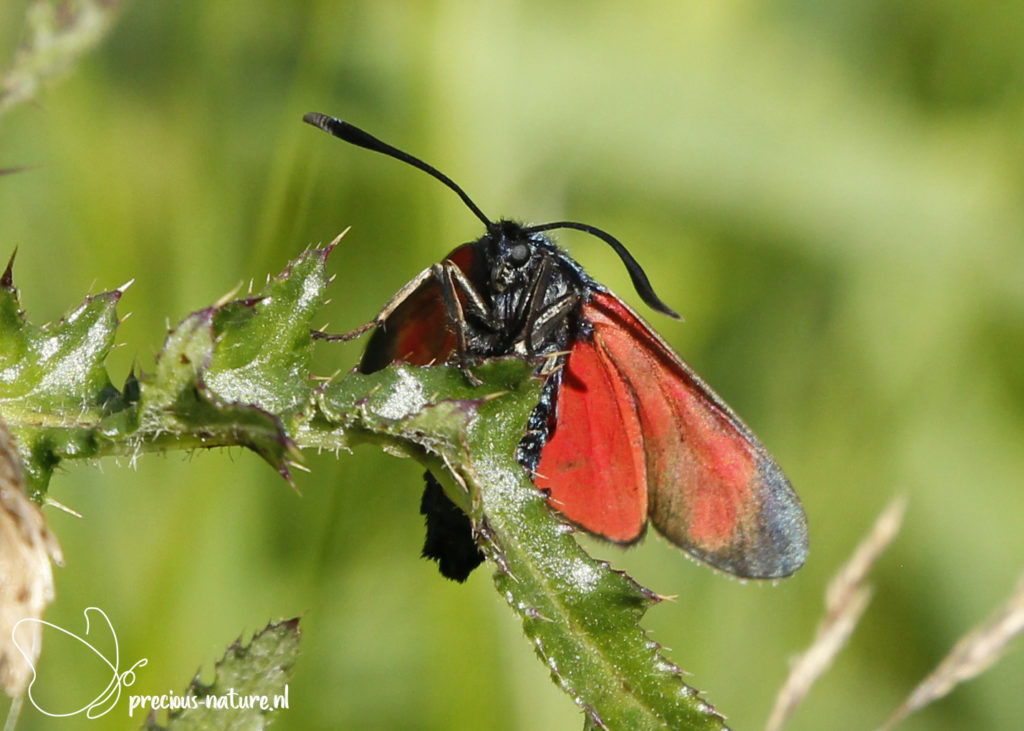