The Pieridae or the whites and sulphurs do not resemble their name. This butterfly family consists of butterflies with a wide variety of colours and some species have a striking wing marking. Although mainly yellow, white and orange occur, you also see red and black. The wingspan is usually around 50 mm and all legs have forked claws. Males and females often differ in appearance. In terms of protection against certain enemies, the whites have a special technique. Although birds see them, they are careful to eat them. The whites have absorbed toxins from the host plant when the caterpillar ate it. In the case of the Large and Small White, these are mustard oils from the cruciferous vegetables. The birds are therefore careful to eat them and should that happen once they quickly spit them out. The Brimstone, which does not have these toxins, enjoys the fact that it looks a bit like a white and is, therefore, left alone during the flying period that corresponds to that of the whites.

The Common Grass Yellow (Eurema hecabe) is a butterfly that does not occur in Europe but in Asia or Africa. I spotted this butterfly during a working visit to Japan. The wings are lemon-yellow with brown speckles on the bottom and some smaller brown spots. The wingspan is 35-45mm. Host plant: Peacock Flower, Yellow Cow Wood and Pink Mempat. Dutch name: Gewone grasgeeltje. Frisian name: –

The Orange Tip (Anthocharis cardamines) is a butterfly that flies in one generation in the Netherlands from late March to early June. The wingspan is 45-50mm. I don’t often see them in the North. The underside of the hindwing is yellowish-green. The male stands out because of the orange wingtips on the top of the front wings where the female has black wingtips. Both have a black dot on the top of the front wing. Host plant: Cuckooflower and Garlic Mustard. Dutch name: Oranjetipje. Frisian name: Oranjetipke. 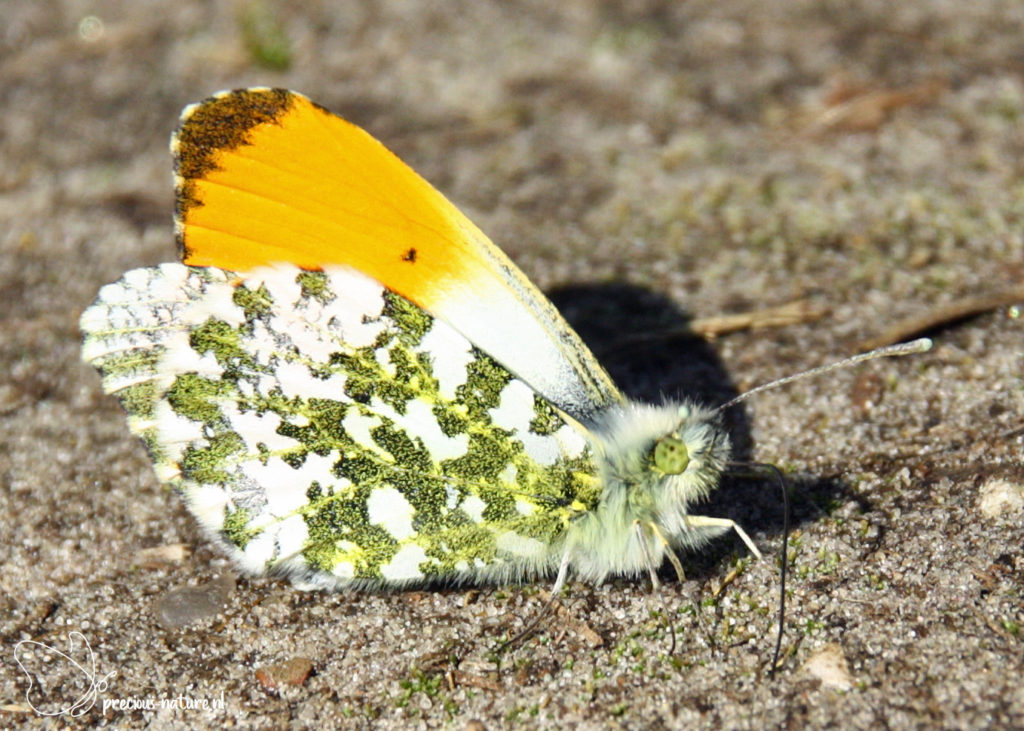 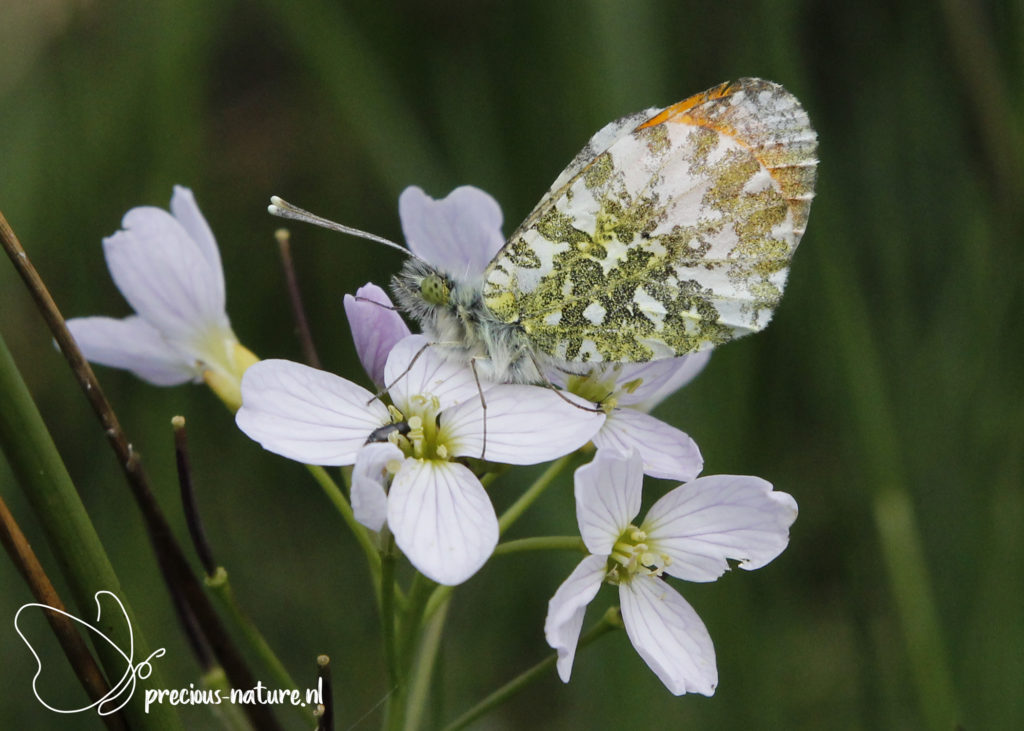 During a walk in an area where I often walk around, I was pleasantly surprised to see the Clouded Yellow (Colias crocea). This is a migratory butterfly that is not often seen except in the south of the Netherlands and in coastal areas. The top of the wings is orange-yellow and a broad brown-black band can be seen along the trailing edges of both the front and rear wings. Light veins in this dark band can be seen in the male and orange-yellow spots in the female. The undersides of both wings are yellow with some light brown spots, the rear wing has a kind of greenish speckling. On the underside of the hindwing, a central white spot can also be seen, surrounded by a light brown zone. On the bottom of the forewing, on the other hand, is a black dot. The wingspan is 57-62mm and the flight period is in several generations from May to October. Host plant: Clover, Lucerne and Common Bird’s-foot-trevoil. Dutch name: Oranje luzernevlinder. Frisian name: Oranje luzerneflinter. 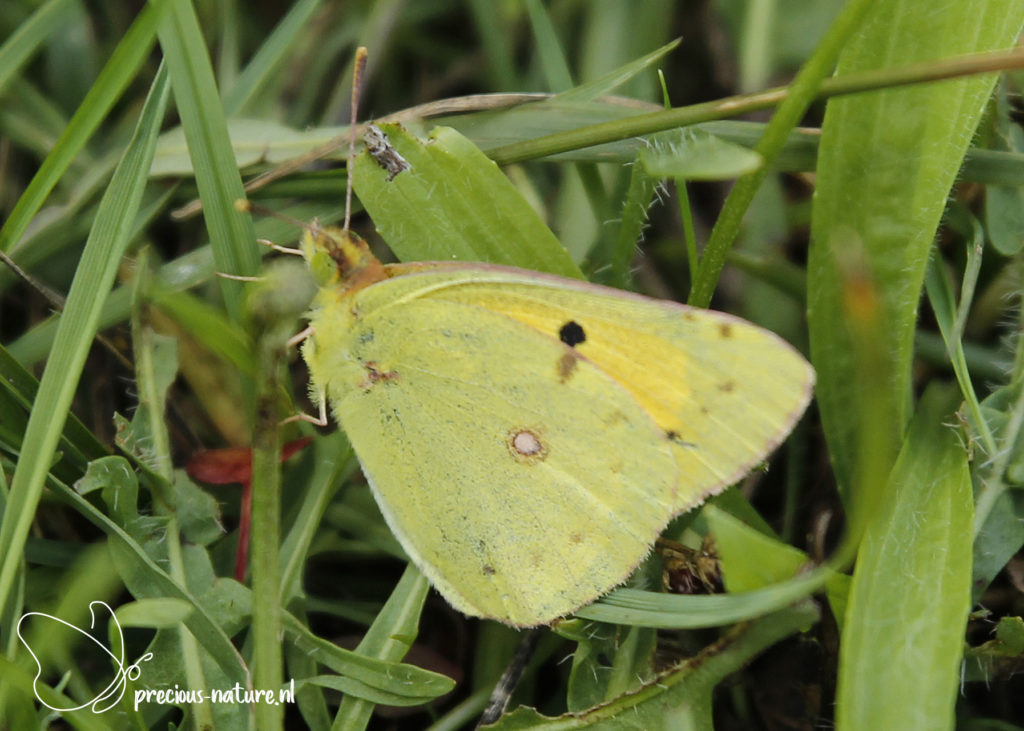 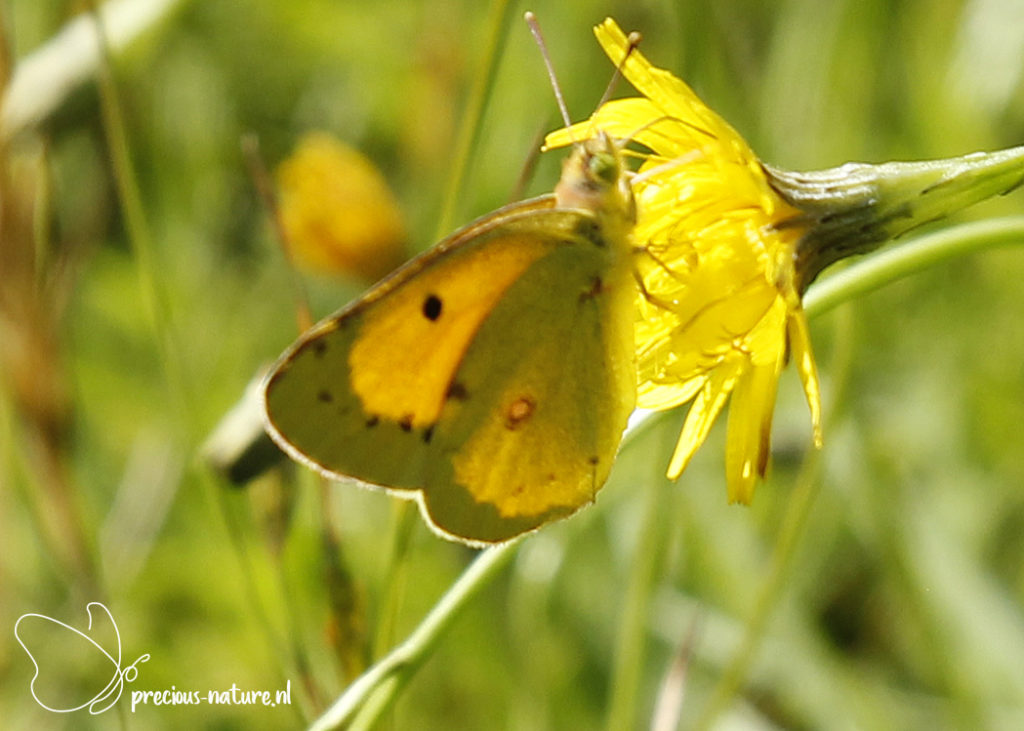 The Brimstone (Gonepteryx rhamni) is a resident butterfly that flies around in one generation from February to October and a wingspan of 60mm. The base colour of both wings is the same. In the male, this is more lemon yellow and in the female light greenish-white. Both the front and rear wings are in the shape of a tree leaf, where the sharp tip of the rear wing is clearly visible. Host plant: Alder and Buckthorn. Dutch name: Citroenvlinder. Frisian name: Sitroenflinter. 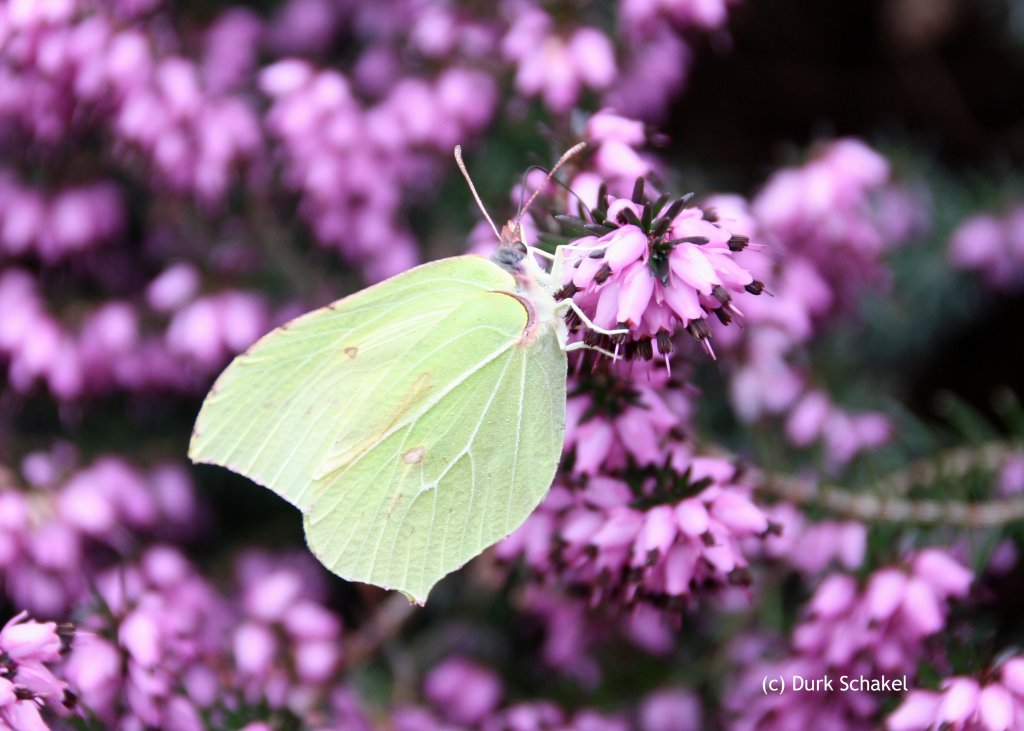 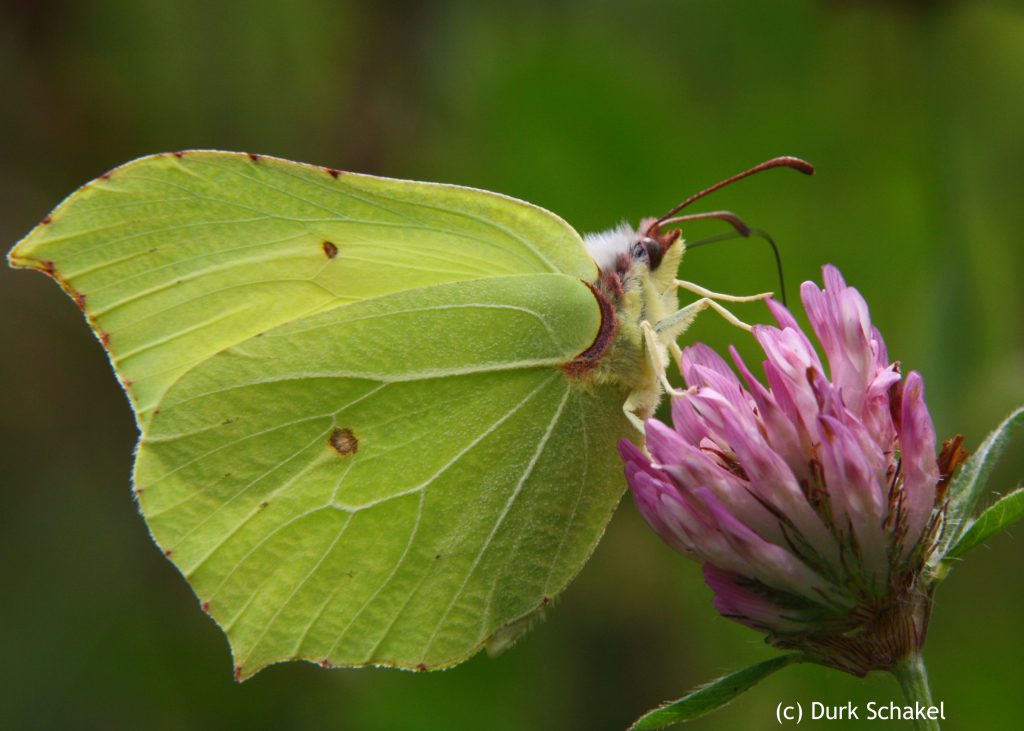 The Bath White (Pontia daplidice) is an immigrant for the Netherlands and is not seen very often. These butterflies are much more common around the Mediterranean where I spotted it during a working visit to Jordan. The underside of the rear wing is marbled green-yellow and there is a black spot on the underside of the front wing. The wingspan is 48-52mm. Host plant: Cabbage family. Dutch name: Resedawitje. Frisian name: Resedaflinter. 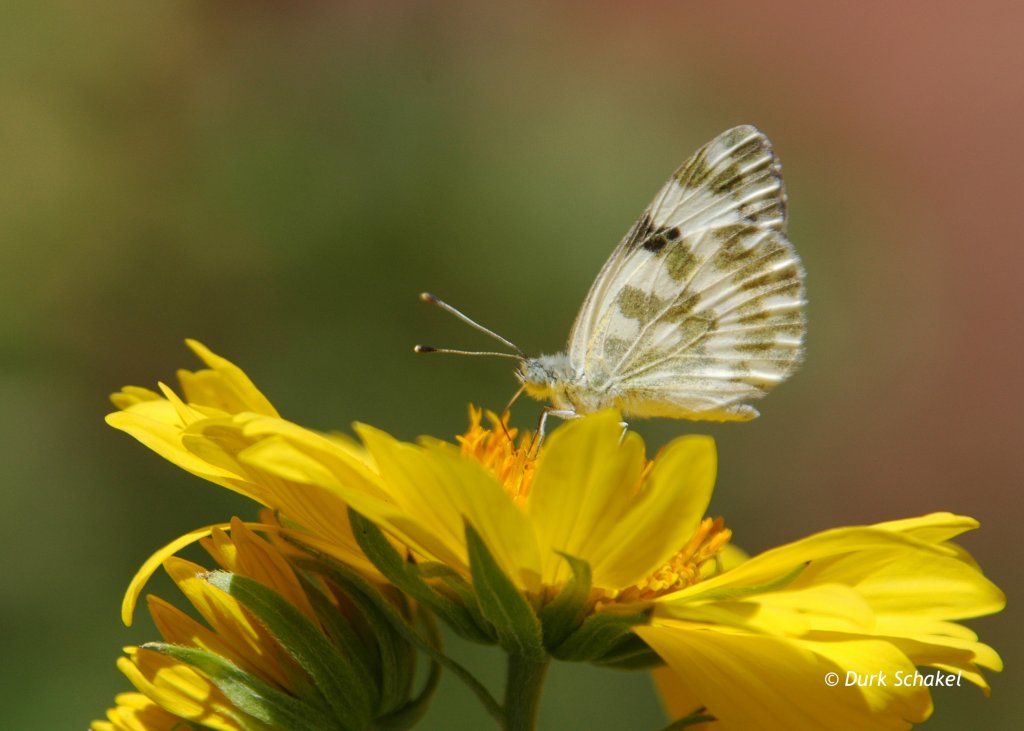 The Green-veined White (Pieris napi) is often confused with the Small White (Pieris rapae). The veins on the underside of the rear wing are clearly visible and grey-green speckling is present directly next to the veins. There is one black spot (male) or two black spots (female) on the top of the front wing. The black spot in the wing tip gradually descends. It flies in several generations from March to October and the wingspan is 50mm. Host plant: Garlic Mustard, Cuckooflower, Hedge Mustard, Wild Cabbage and Wild Radish. Dutch name: Klein geaderd witje. Frisian name: Lytse swartstreek wytflinter. 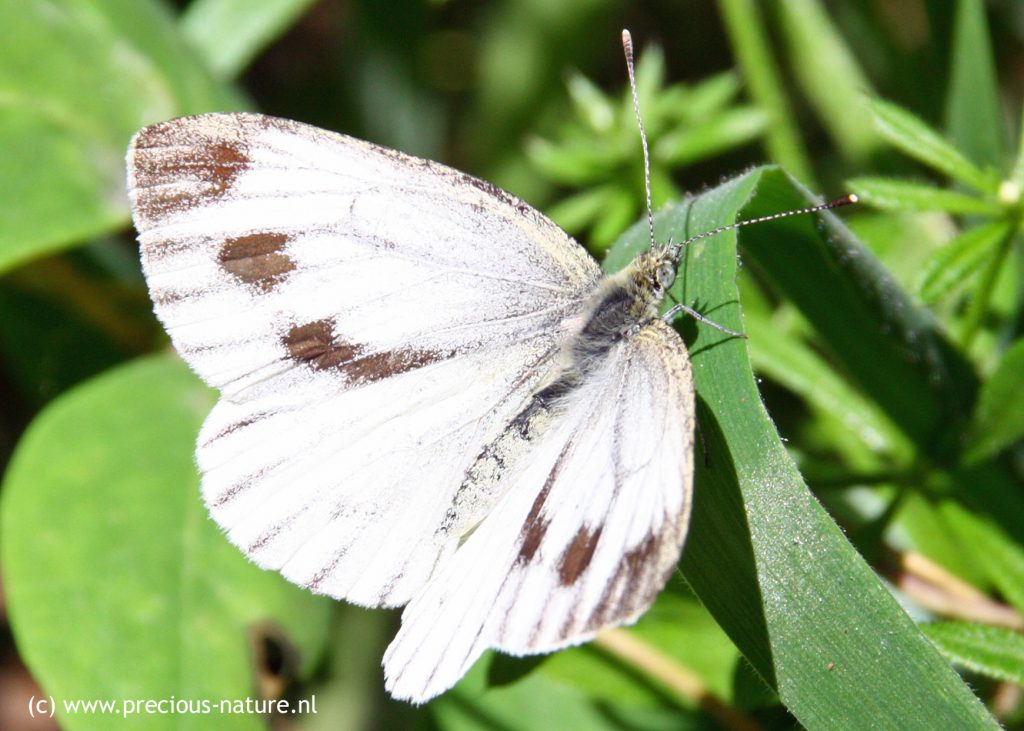 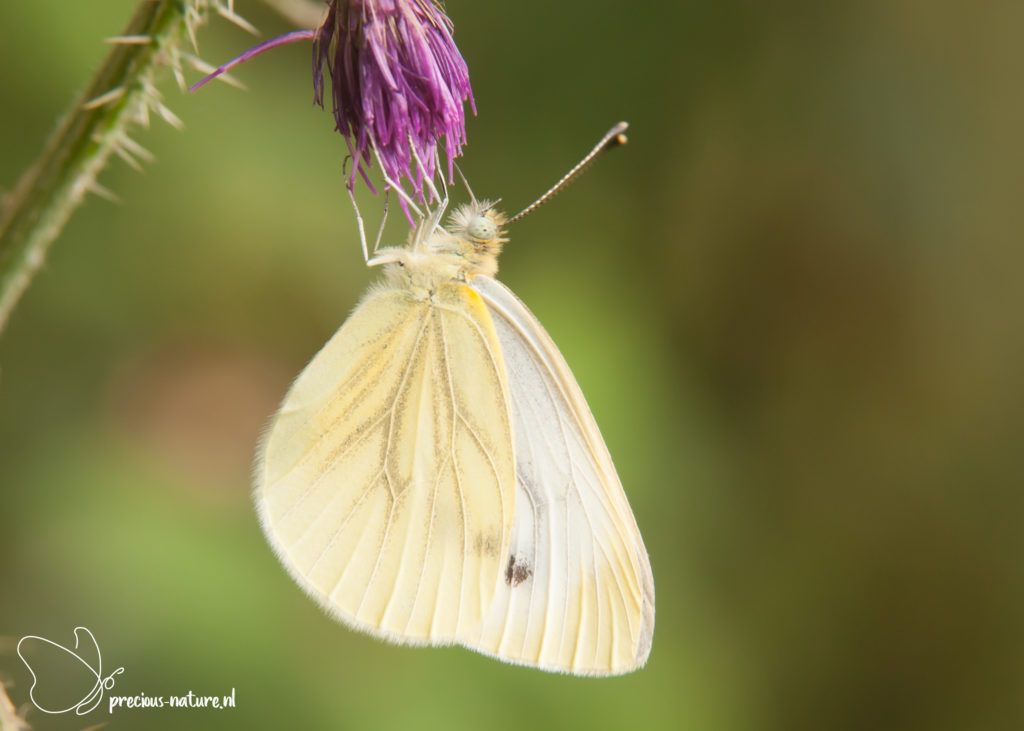 The Large White (Pieris brassicae) is a migratory butterfly that is very common in the Netherlands. They fly around in several generations from March to November and the wingspan is 63-70mm. This white has a large dark black wingtip that extends along the front and back edge. This also distinguishes the Large White from the Small White. The veins at the bottom are not grey-green speckled. Females have two black spots on the forewing, which is not present in males. The undersides are creamy-white with two spots. Host plant: Cabbage and Brussel-sprouts. Dutch name: Groot koolwitje. Frisian name: Grutte wite koalflinter. 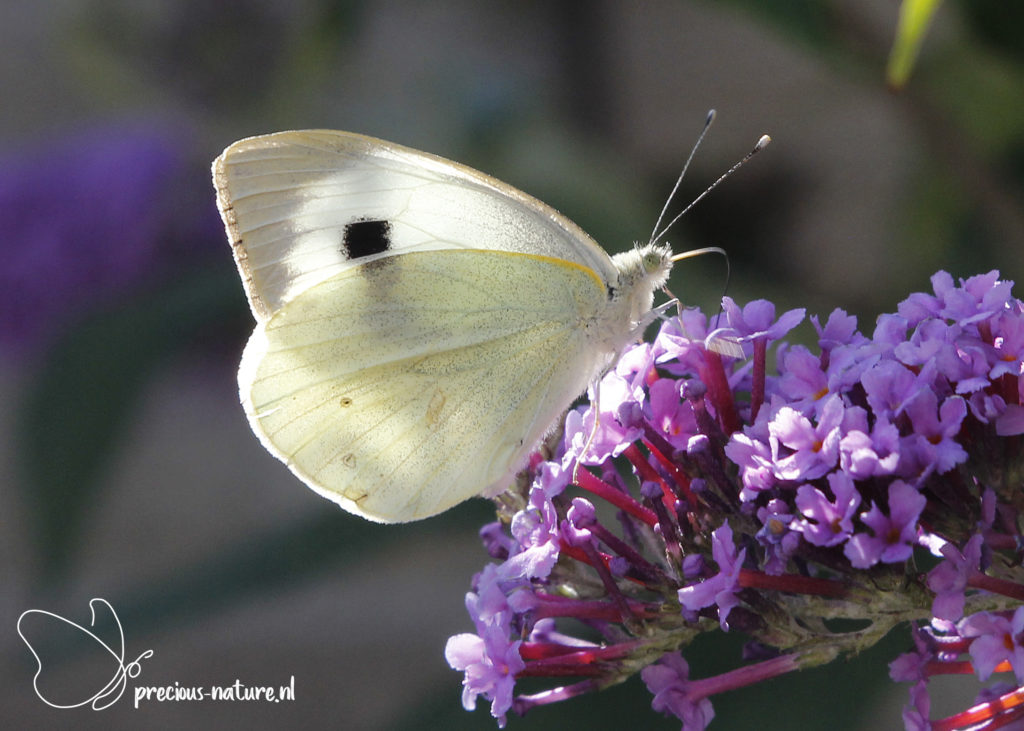 The Small White (Pieris rapae) is easily confused with the Green-veined White. However, the Small White has no green-yellow speckling along the veins on the underside. In addition, the black stain on the front wing is cut straight at the tip and one or two black dots are present. The Small White flies around in several generations from March to November and the wingspan is 48mm. Host plant: Wild Cabbage, Charlock, Hedge Mustard and Garlic Mustard. Dutch name: Klein koolwitje. Frisian name: Lytse wite koalflinter. 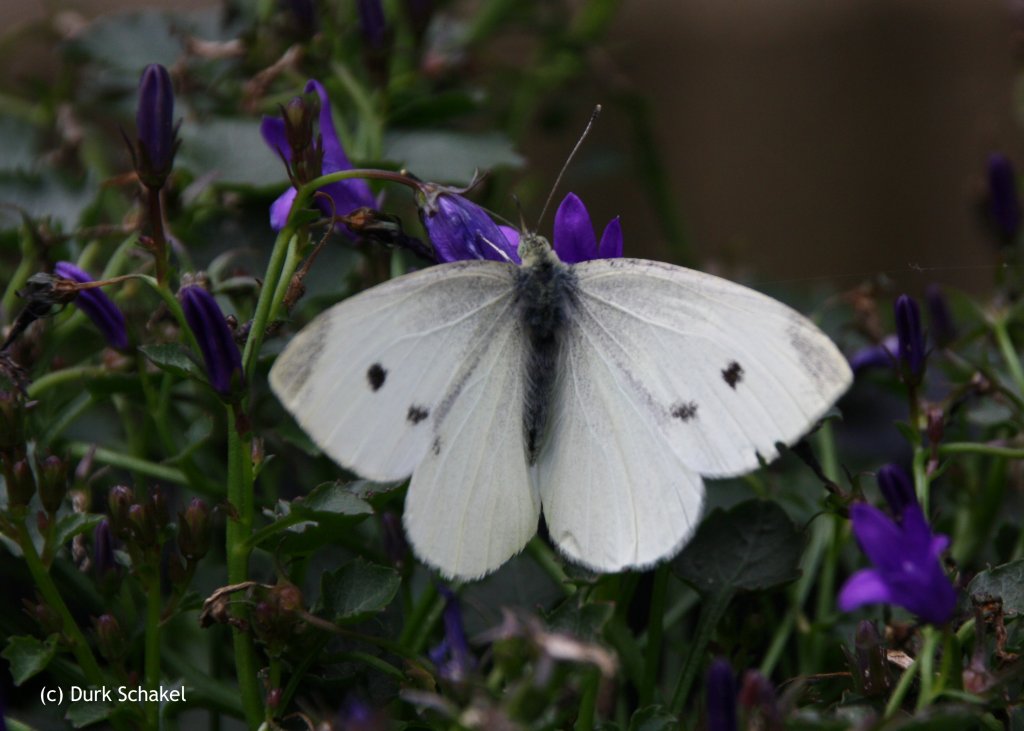 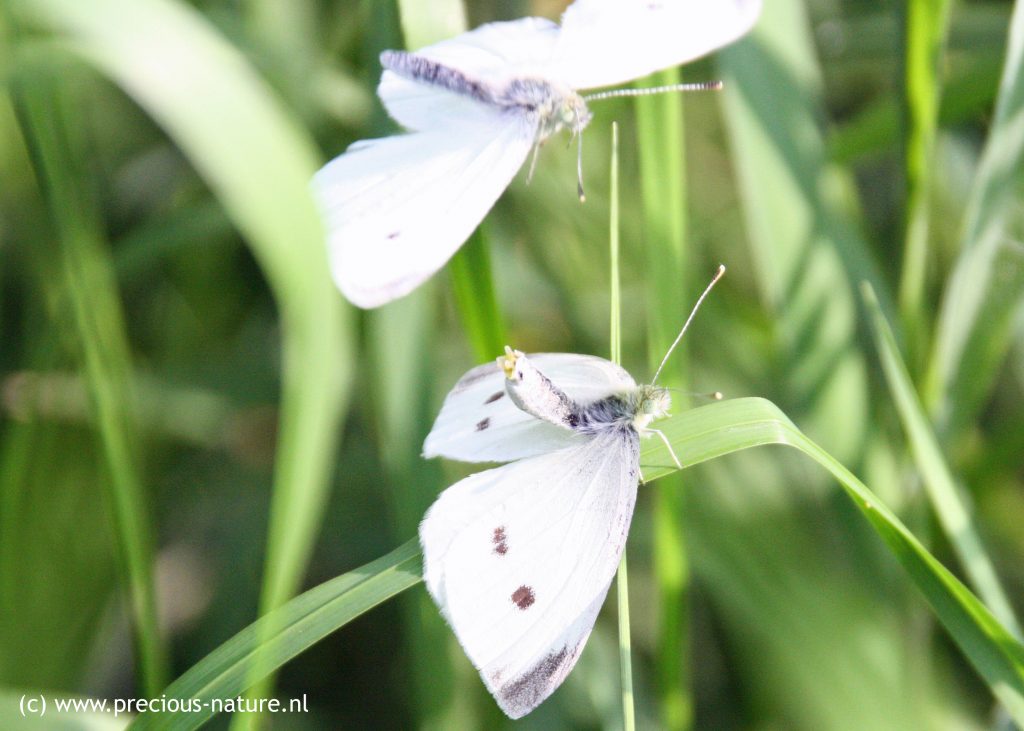 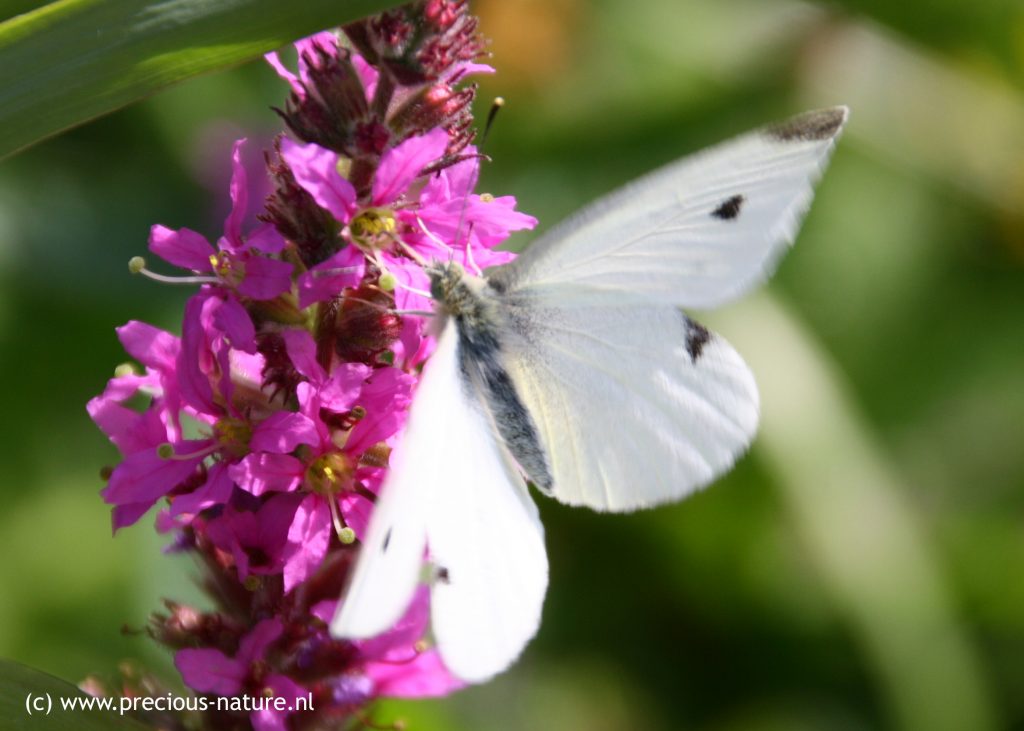 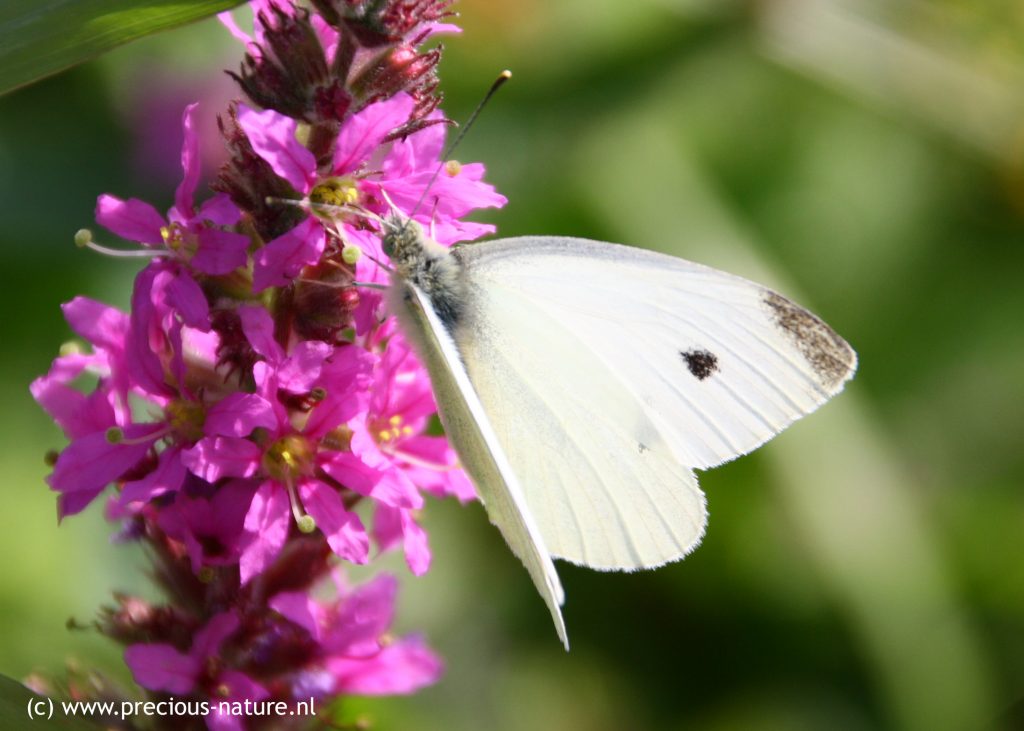