Tiger Moths (Arctiinae) are a subfamily of the Erebid Moths (Erebidae). These sturdy butterflies have a hairy body, sometimes with bright colors or many black spots. The forewings usually have a cryptic pattern, the hindwings have a contrasting pattern with bright colors. The moths use this to warn enemies about their toxicity and the fact that they cannot be eaten. Tiger Moths use adapted hair cuticles to make ultrasonic sounds, so-called “clicks”. This allows them to draw attention to their bright colors, thereby mimicking the toxicity, to reproduce sounds of other species, or even to disrupt the echolocation by bats. These sound-making organs and the sound they produce differ a lot between the different species. Most species fly at night and are attracted to light, but some species fly in the early morning or during the day. Worldwide there are about 14,000 species, of which about 40 have been recorded in the Netherlands.

The Garden Tiger (Arctia caja) can be recognized by the white with dark brown pattern on the forewing and the orange-red hindwing with blue-black spots. It is able to produce a clear yellow fluid from two ducts just behind the head. It flies in one and sometimes two generations from June to September and the wingspan is 50-78mm. Host plant: Common Nettle, Broad-leaved Dock, Water Dock, and Hound’s-tongue. Dutch name: Grote beer. Frisian name: Grutte bearflinter. 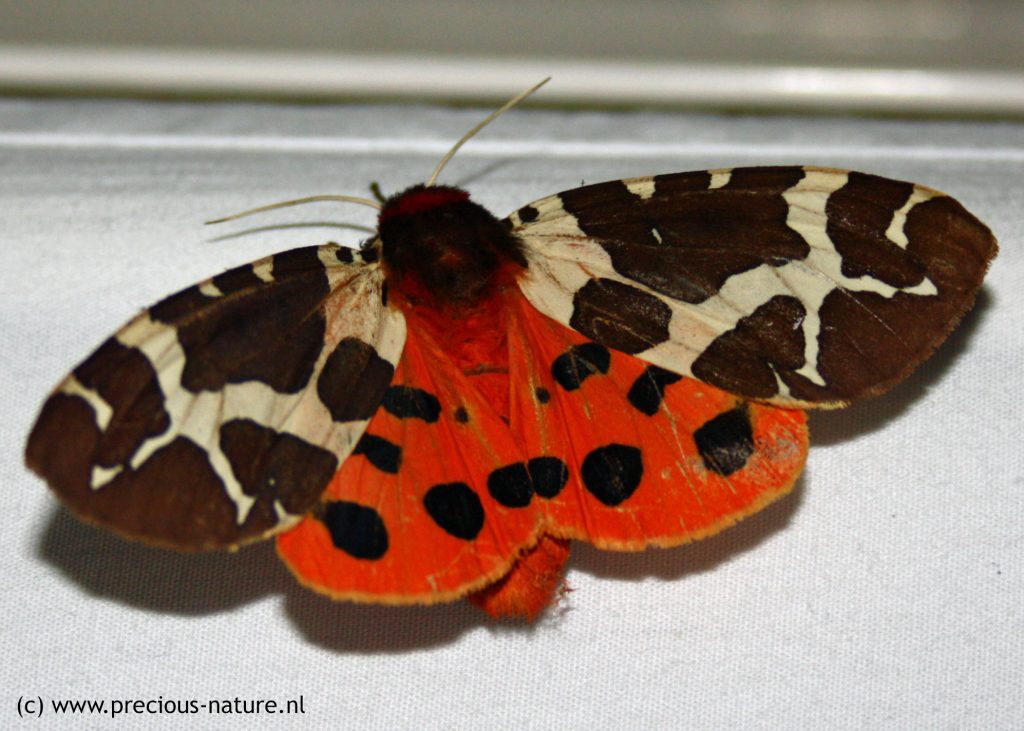 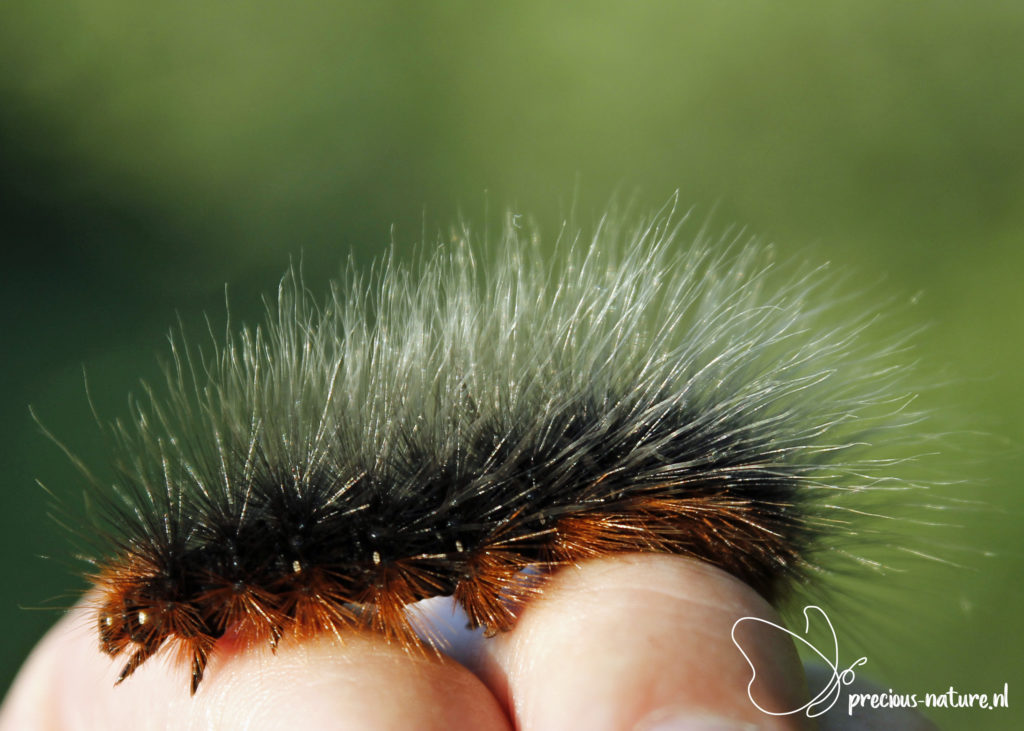 I discovered the Clouded Buff (Diacrisia sannio) during the day while it was disturbed and came out of the long grass. A pleasant surprise due to the striking colors. The male has a yellow forewing with a red spot in the middle and a red stripe along the dorsum. The female has an orange forewing with red veins. The hindwing is white, a black band along the termen and a red wing edge. Like on the forewing, there is a spot in the center only this one is black. He flies in one generation from May to August and has a wingspan of 34-44mm. Host plant: Heather, Sheep’s Sorrel, and Common Dog-violet. Dutch name: Roodbandbeer. Frisian name: Readbânbear. 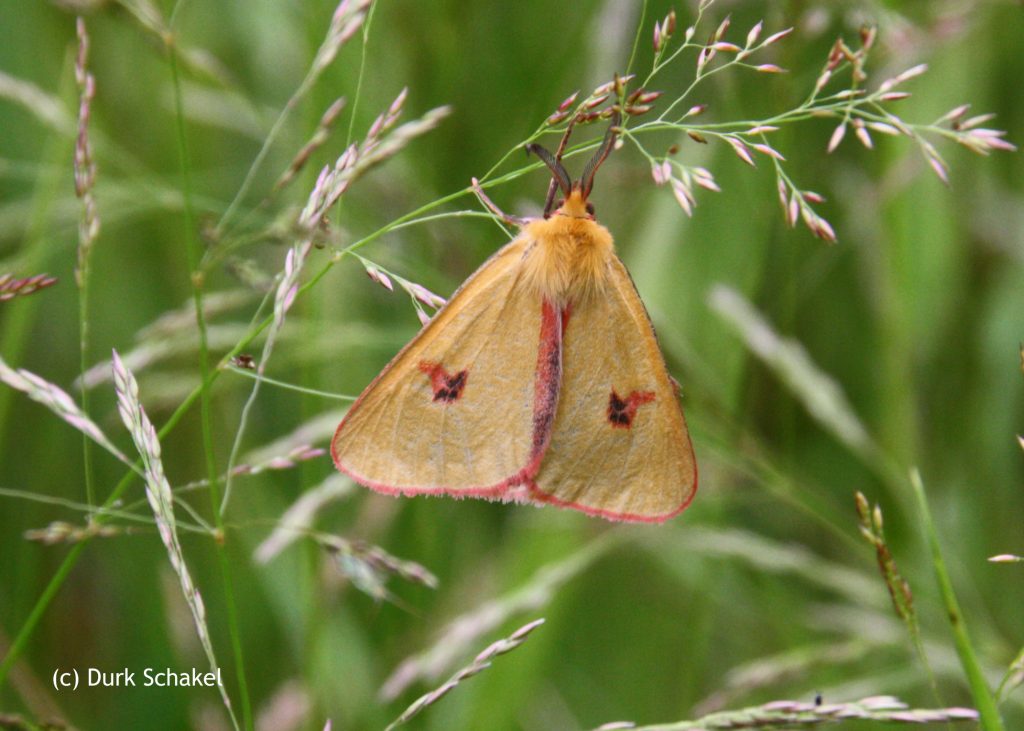 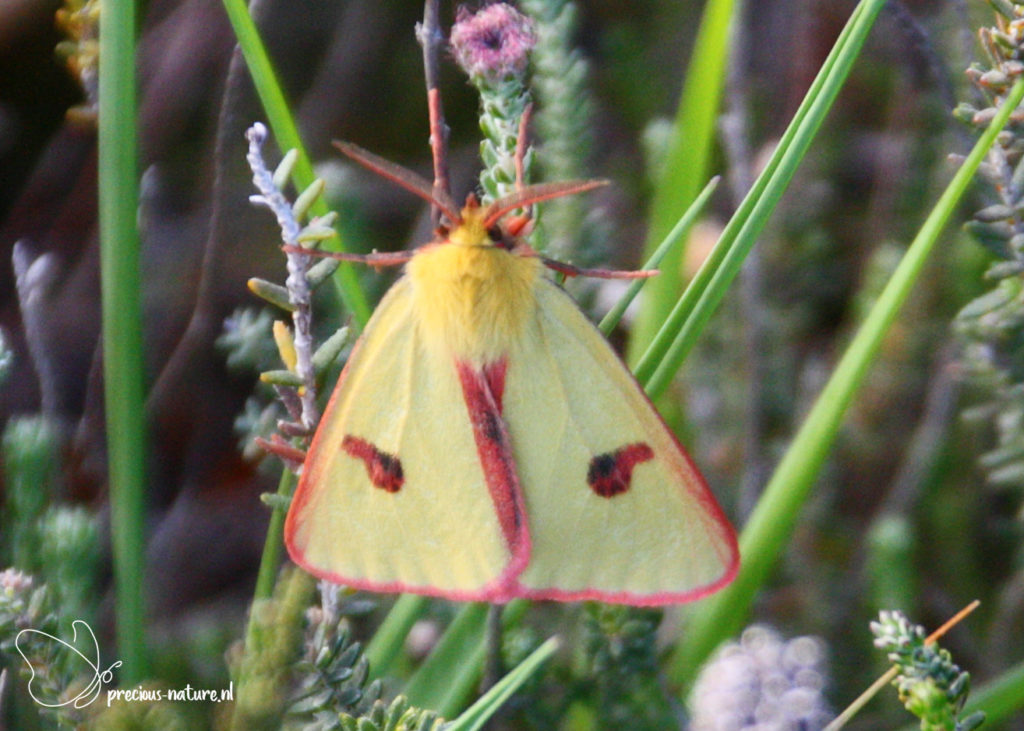 It’s always nice to spot a new species at the moth sessions in my backyard. In that respect, 2019 was a good year. Many new species including the Speckled Footman (Coscinia cribraria). In the resting position, this moth folds its wings around its body in such a way that the wingtips appear pointed. The greyish-white forewing has a number of dark transverse bands that consist of rows of blackish spots that are sometimes fused together. The blackish streaks on the forewing can vary in number and size. For the specimen inlands the blackish streaks are much more prominent than for the coastal specimens. The hindwing is brownish-grey with whitish fringes. The flight period is from June to September in one generation and the wingspan is 30-35mm. Host plant: Heather and Blueberry. Dutch name: Grasbeertje. Frisian name: – 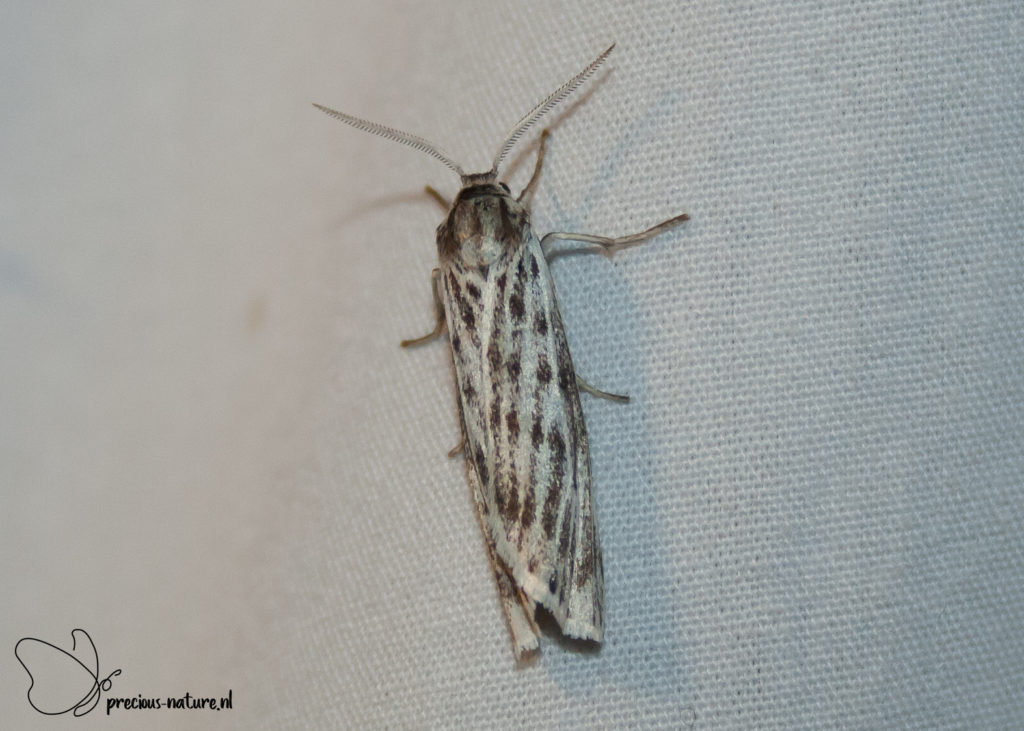 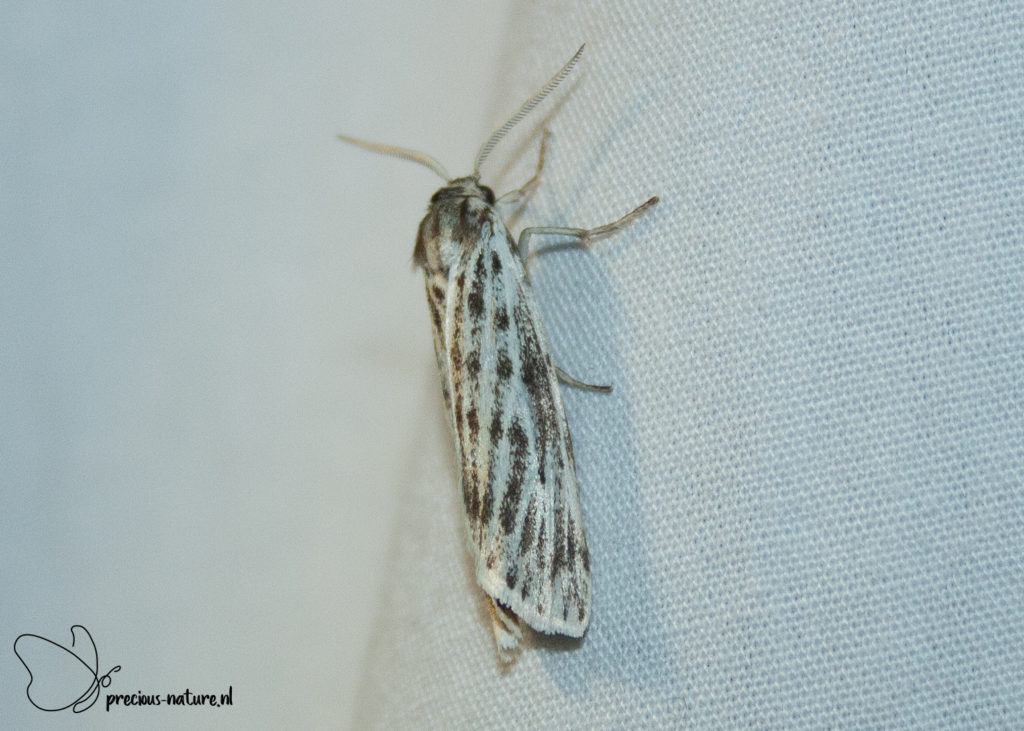 The Jersey Tiger (Euplagia quadripunctaria) is an easily recognizable butterfly because of the green-black forewing with cream-colored stripes and red, orange, or yellow hindwing. It flies both in the daytime when it can be found feeding on various flowers, as well as at night when it is attracted to light. This moth flies in one generation from July to the end of August and the wingspan is 52-65mm. Host plant: Common Nettle, Hemp-argimony, Borage, Ground-ivy, and Bramble. Dutch name: Heravlinder or Spaanse vlag. Frisian name: – The Dingy Footman (Eilema griseola) is a relatively narrow elongated butterfly that has folded its wings in a resting position. The wings are yellowish or grey. The grey specimens have a narrow yellow stripe along the costa and the black legs are striking. They fly at night but can be spotted resting on the leaves of deciduous trees during the day. That’s where I’ve seen them so far. He flies in one and sometimes two generations from June to October and the wingspan is 32-40mm. Host plant: Mosses and algae on trees. Dutch name: Glad beertje. Frisian name: Glêd bearke. The Common Footman (Eilema lurideola) is not exactly a moth that I expected in my backyard. It is more of a moth found in wooded areas. The front wing is lead grey with a clear yellow stripe along the costa. In the direction of the apex, it gets thinner and thinner. The hind legs are largely yellow, which distinguishes it from the Buff Footman (Eilema depressa). The hindwing is light yellow and is folded under the forewing in a resting position. The flight period is from June to September in one generation and the wingspan is 28-34mm. Host plant: Lichens and algae on trees, stones, and posts, sometimes leaves of Hawthorn, Blackthorn, and Blackberry. Dutch name: Plat beertje. Frisian name: – 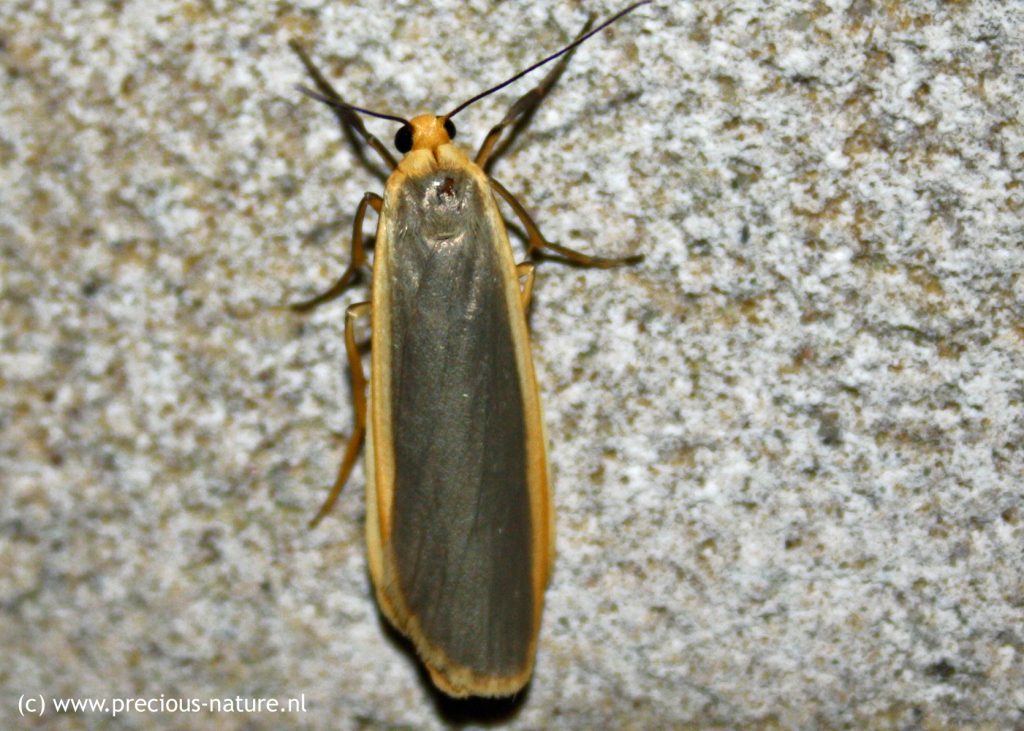 A tiger moth that keeps its wings in a tube around its body in a resting position is the Hoary Footman (Eilema caniola). This moth loves warmth and needs warm years to develop. That is now increasingly the case in Northern Europe and that could be a reason that he is spotted more often in the Netherlands. The forewing is narrow and very light grey. A pale yellow border can be seen along the costa. The hindwing is white in contrast to the Scarce Footman (Eilema complana) that can be easily confused with this species. The flight period is in two generations from late May to September and the wingspan is 28-35mm. Host plant: Mosses, algae, and clover. Dutch name: Vaal kokerbeertje. Frisian name: – The shape of the wings of the Orange Footman (Eilema sororcula) is characteristic of the species within its family. The costa is straight up to 2/3 and then strongly bends towards the apex. The wing has a striking orange-yellow color that slightly becomes paler as the moth grows older. The wingspan is 27-30mm and the flight period is from April to July in one generation. Host plant: Mosses on Oak, Beech, and Blackthorn. Dutch name: Geel beertje. Frisian name: Giel bearke. 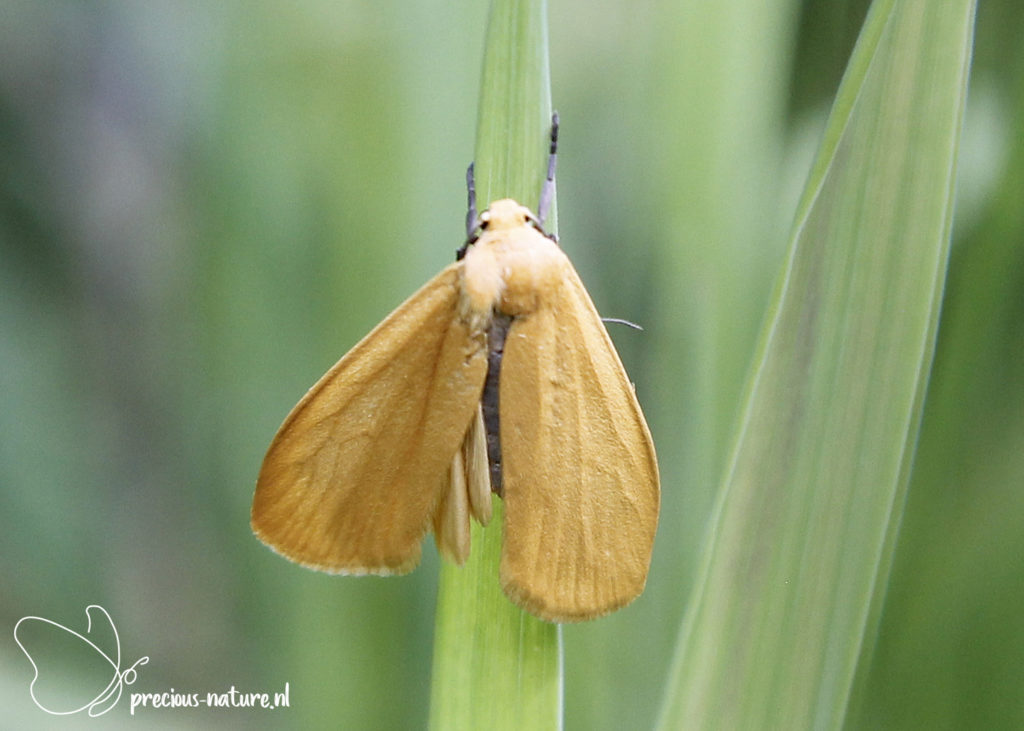 When checking the moth trap, I discovered the Scarce Footman (Eilema complana). The grey forewing has an orange-yellow stripe along the costa that is the same width over the entire length. Striking is the orange-yellow collar, which also distinguishes it from the resembling Common Footman (Eilema lurideola). The Common Footman has a grey spot in the orange-yellow collar. In addition, the Scarce Footman has its wings in a tube around the body in a resting position where the Common Footman rests with the wings flat above the body. Another similar moth is the Hoary Footman (Eilema caniola). Where the Hoary Footman has a white hindwing, the Scarce Footman has a pale yellow hindwing with sometimes a grey smudge on it. The wingspan is 28-35mm and the flight period is from June to September in one generation. Host plant: Mosses on stones, pole, and branches on the ground. Dutch name: Streepkokerbeertje. Frisian name: – The Dotted Footman (Pelosia muscerda) is a moth with a fairly slender, soft grey-brown forewing. The costa is often a bit lighter in color. The characteristic of this moth is the pattern of five, sometimes six, small black dots that can be seen in two separate rows on the forewing. The wings are often folded over each other in a resting position. The flying period is from June to September and the wingspan is 24-28mm. Host plant: Lichens and algae. Dutch name: Muisbeertje. Frisian name: Mûsbearke. 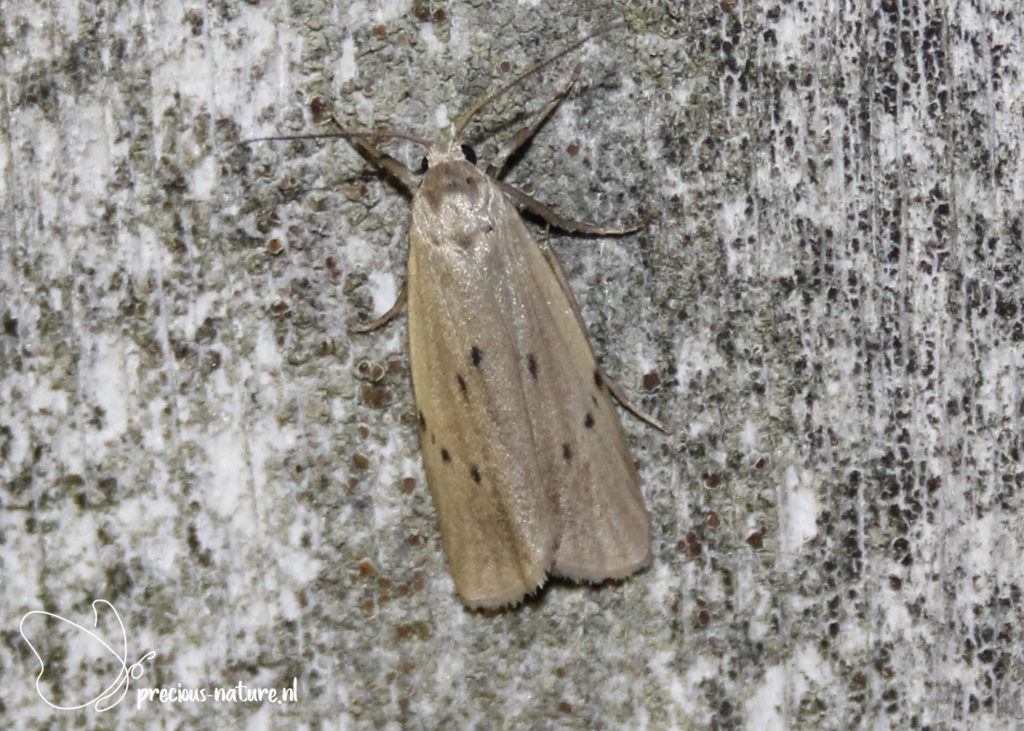 The difference between the Ruby Tiger (Phragmatobia fuliginosa) and the Garden Tiger (Arctia caja) is that the Ruby Tiger is much smaller. The top of the forewing is reddish-brown and two small dark dots can be distinguished on each wing. The hindwing is bright red, as is the top of the two hind legs, and has some dark spots. He flies at night and is attracted to light very well. It flies in two generations from April to September and the wingspan is 28-34mm. Host plant: Ragworts, Plantains, Heather, Dock, Dandelion, Spindle, and Broom. Dutch name: Kleine beer. Frisian name: Lytse bearflinter. The Buff Ermine (Spilosoma lutea) is a moth that I attracted to light. The male has a yellowish ground color and the female a white one. Both have elongated spots that extend from the apex over the wing to the inner edge. From the top, this looks like a “clock” shape. The difference with the White Ermine (Spilosoma lubricipeda) is the number of black spots that are much lesser in number with the Buff Ermine. He flies in one generation from April to September and the wingspan is 34-44mm. Host plant: Common Nettle, Honeysuckle, Hops, and birches. Dutch name: Gele tijger. Frisian name: –

A moth that belongs to the Tiger Moth is the White Ermine (Spilosoma lubricipeda). Previously, this butterfly was also called the ten o’clock butterfly, because it was only seen after 10 o’clock in the evening. The white forewing has a pattern of small black spots with at least one central black spot visible. The number of black spots can vary greatly and sometimes they form streaks along the wing veins. The head is very hairy and the abdomen is bright yellow on top with black spots on both sides. The flight period is in one generation from May to August and the wingspan is 36-46mm. Sometimes there is a second-generation from September to October. Host plant: Sorrel, Common Nettle, and Elder. Dutch name: Witte tijger. Frisian name: Tsienoereflinter. In a wetland environment, I saw the striking white Water Ermine (Spilosoma urticae) sitting on a green grass stem. The milky-white forewing is elongated and there is one black dot in the center. In some cases there are two or a small row of dots can be seen at the apex. The hindwing is solid white and both antennas are whitely pollinated. The Water Ermine resembles the White Ermine (Spilosoma lubricipeda), but the latter usually has many more black dots on the forewing and a black dot on the hindwing. In addition, a characteristic difference is that the basal segment of the palps is yellow for the Water Ermine and not for the White Ermine. Another similar species is the Muslin moth (Diaphora mendica). The characteristic difference here is the abdomen. It is yellow for the Water Ermine and whitish or greyish brown for the Muslin moth. The flight period is from April to July in one generation and the wingspan is 38-46mm. Host plant: Water Dock and Water Mint. Dutch name: Sneeuwbeer. Frisian name: Sniebear.