Spilomelinae are a subfamily of the Grass Moths (Crambidae) that previously fell under the Pyraustinae. Worldwide, slightly more than 4,100 species have been registered. When resting, a triangular shape is accomplished with the abdomen covered with the wings and the forewing overlying the hindwing. The eyes, antennae, and mouthparts are very well developed.

During the year there is a lot of talk about the larvae of the Box-tree Moth (Cydalima perspectalis). Many people sometimes suffer from completely bare Buxus bushes, which is almost impossible to stop. Finally, I was able to lure the moth responsible for this during a moth session. The forewing is bright, translucent white. A distinct brown band can be seen along the costa, continuing from the apex in a wider brown band along the termen. This brown band is also clearly visible at the hindwing. On the forewing, along the costa, a small white spot can be seen in the slightly widened brown band. The flying period is from May to October in two generations and the wingspan is 35-40mm. Host plant: Buxus. Dutch name: Buxusmot. Frisian name: – 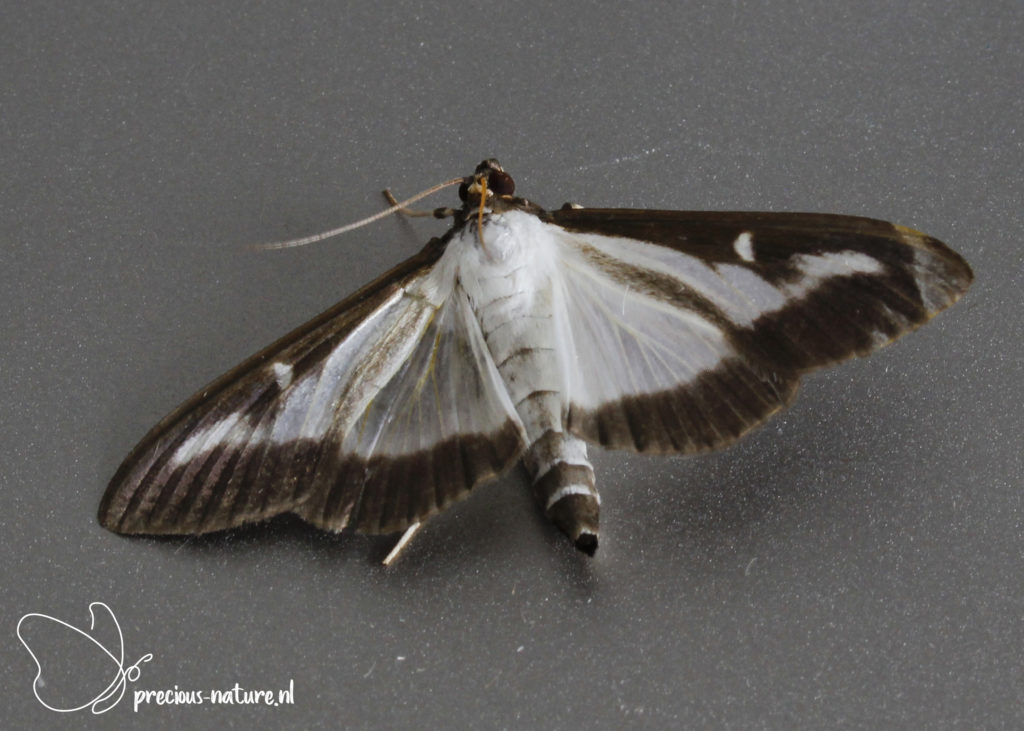 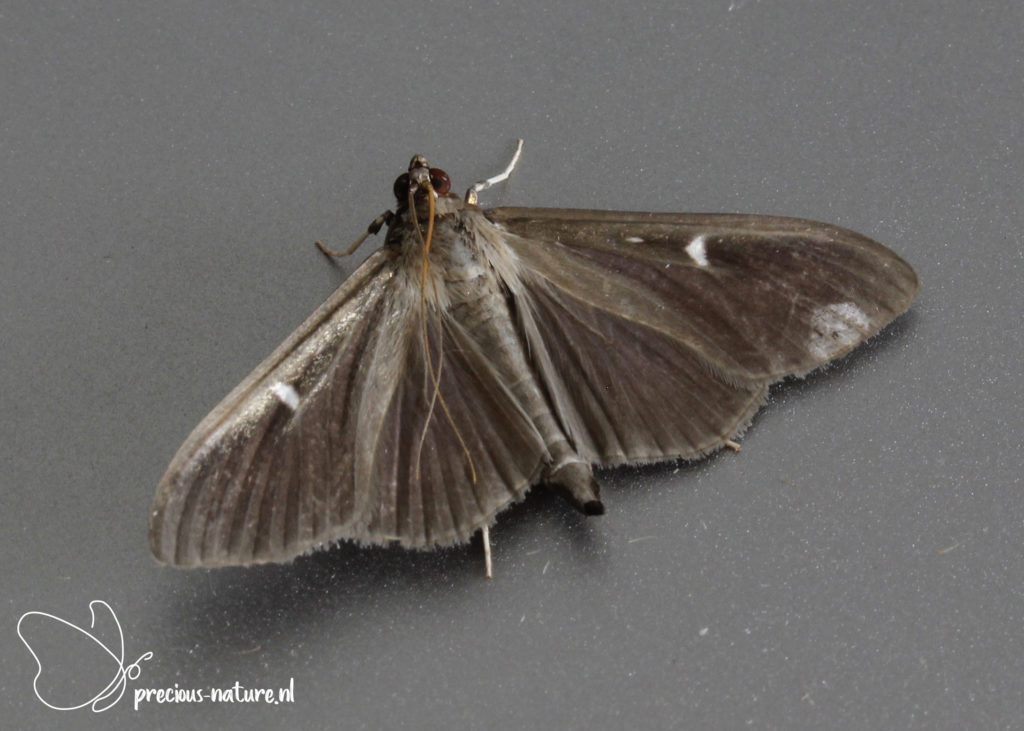 An easily recognizable grass moth is the Rush Veneer (Nomophila noctuella). When resting, this grass moth looks long and narrow. The forewing is greyish brown with dark markings to brown or reddish-brown with slightly darker and more obscure markings. In some species, you will see an 8-shaped mark halfway down the wing and a kidney-shaped spot at 2/3. This makes the grass moth look like a leopard. Some dark spots can be seen on the leading edge of the forewing near the apex. The flying period is from May to September and the wingspan is 26-32mm. The larvae feed in a silk tube. Host plant: White Clover, and Selfheal. Dutch name: Luipaardlichtmot. Frisian name: – 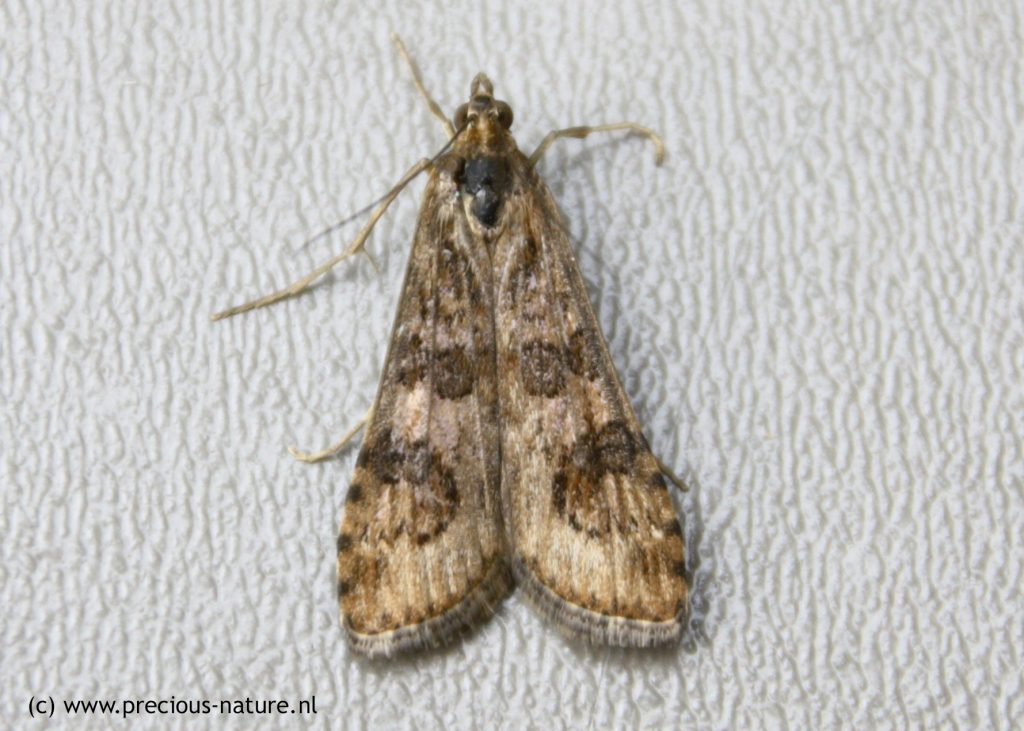 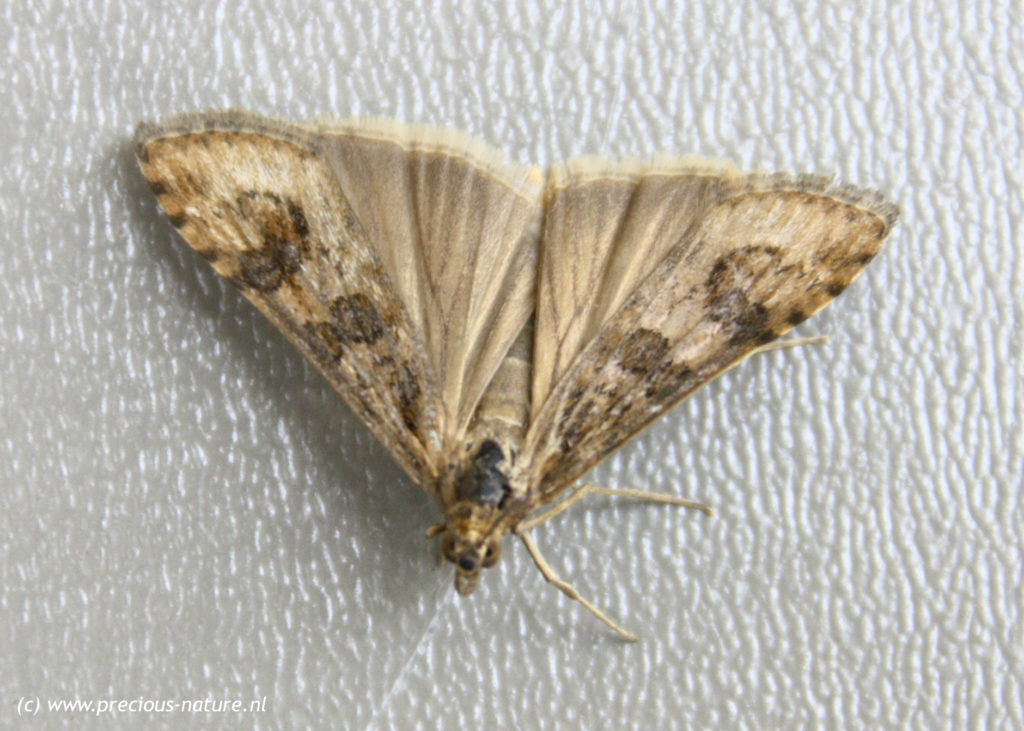 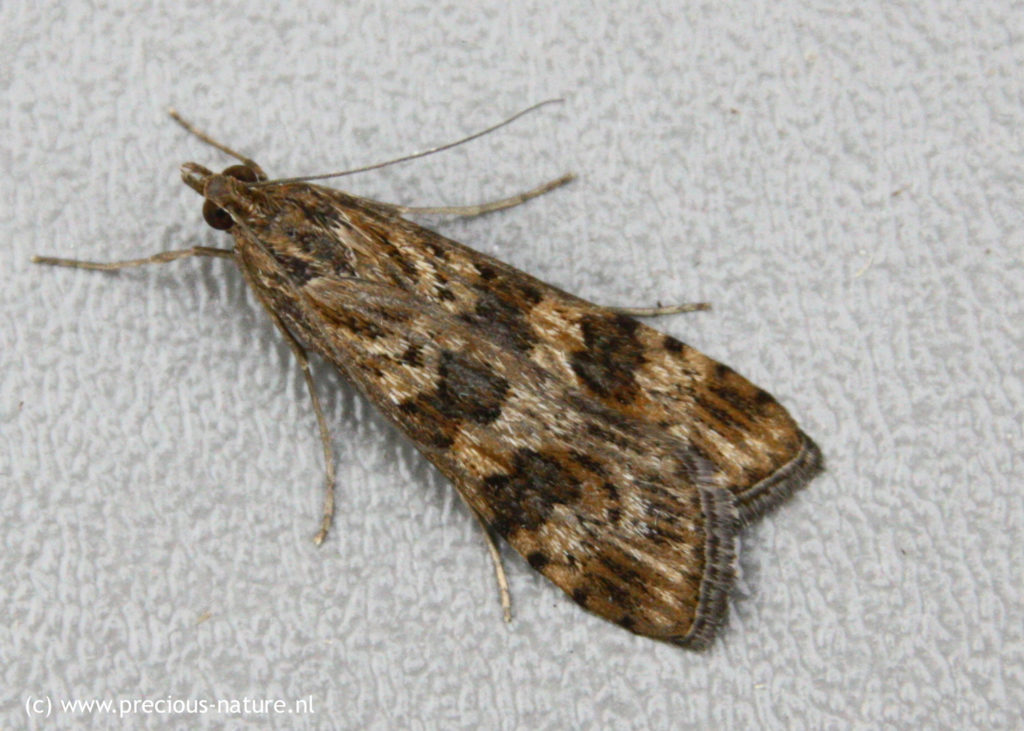 Often grass moths are not very big. An exception is the Mother of Pearl (Pleuroptya ruralis). This moth that attracts easily to light is about 26-40mm and is sometimes confused with a geometer moth. The forewing is pale yellow-brown, with a grey speckle and a pearly sheen. The grey speckle makes it look like the wings are transparent when he sits on a grey wooden fence, like mine. On 1/3 and 2/3 of the forewing, there are dark transverse lines, with it twisting around a sometimes unclear marking at 2/3. The flying period in one generation is from June to October. The larvae feed in a rolled-up leaf of the host plant. Host plant: Common Nettle. Dutch name: Parelmoermot. Frisian name: – 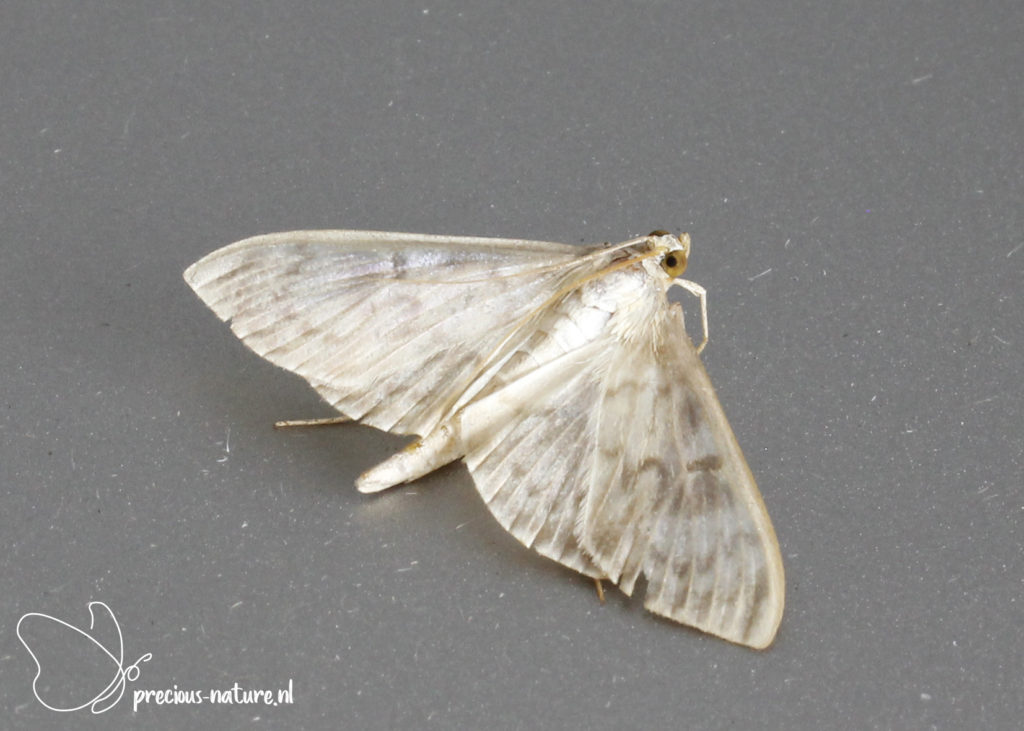 An easily recognizable grass moth is the Olive Pearl (Udea olivalis). The forewing is greyish brown with a distinct white square centrally located spot and some small white spots on the rest of the wing (especially towards the apex). Alternating black and white spots can be seen on the wing margin. The flying period in one generation is from May to August and the wingspan is 24-28mm. The larvae can be found in a spun or turned leaf. Host plant: Nettle, Dog’s Mercury, Yellow Archangel, Red Campion, and Common Comfrey. Dutch name: Witvlekkruidenmot. Frisian name: – 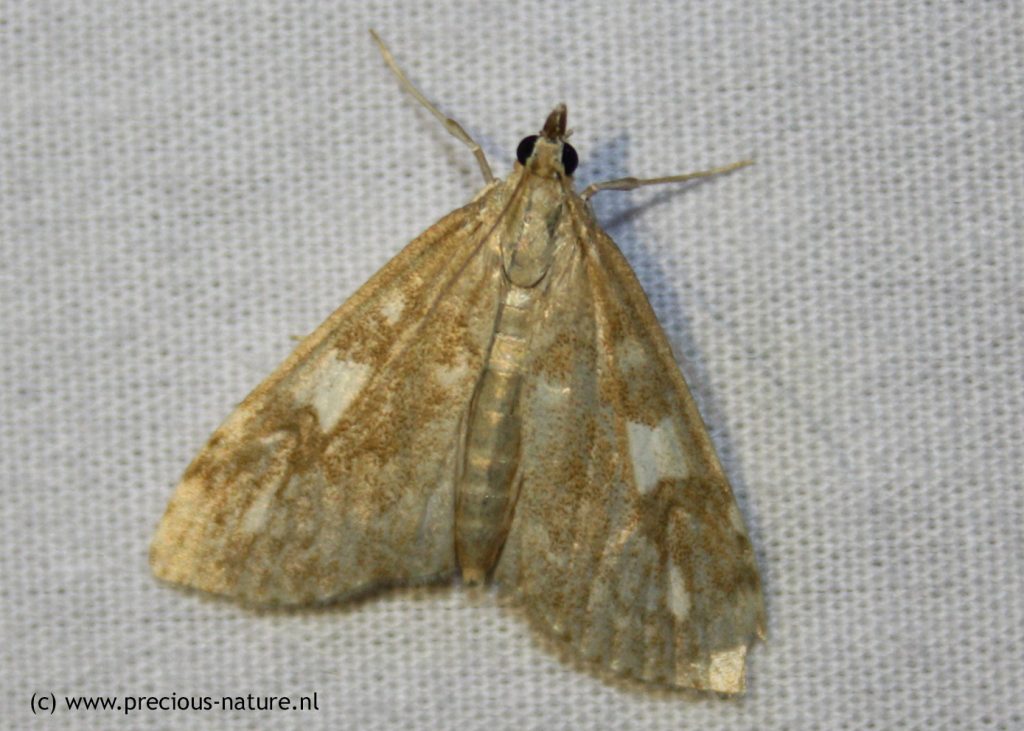 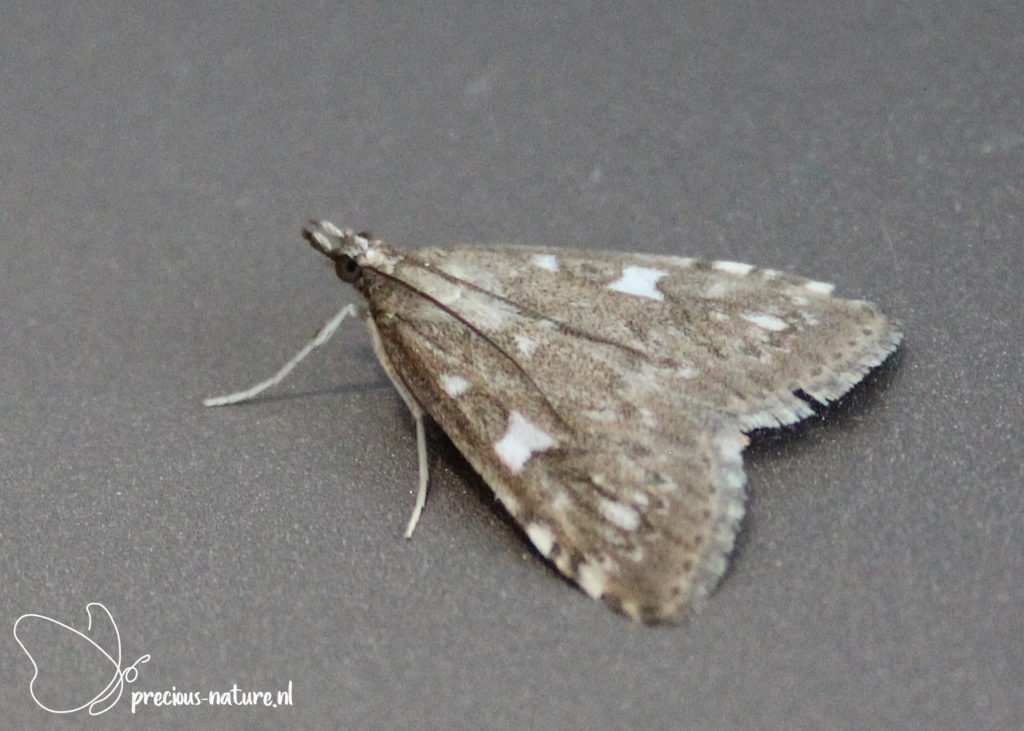 The first spot of the Dusky Pearl (Udea prunalis) was a bit of a puzzle. Because the specimen was worn reasonably well, extra attention had to be paid to specific characteristics to distinguish it from the Olive Pearl (Udea olivalis). The forewing is grey-brown and darker on the costa. Close to the apex on the edge dark and light spots alternate. On 2/3 of the wing, you can see an unclear transverse line that is slightly darker than the ground color of the wing. Where white spots can be seen in the fringed line of the Olive Pearl, those of the Dusky Pearl are missing. Furthermore, the large white square spot is missing. The flying period is from May to August in one generation and the wingspan is 20-24mm. The larvae can be found in spun leaves of the host plant. Host plant: dead nettle, Black Horehound, Common Knapweed, Dog’s Mercury, Common Nettle, Elder, and Blackthorn. Dutch name: Grijze kruidenmot. Frisian name: –