The Tuft Moths (Nolidae) are small triangular butterflies with rounded forewings. A special feature is the raised scales, usually three, in the midfield of the forewing from where they owe their name. Members of the subfamily Chloephorinae, are often colored vivid green, and the Nolinae are predominantly dull grey or white.

As far as I am concerned, one of the more beautiful moths in color is the Green Silver-lines (Pseudoips prasinana). The male has an intensely greener forewing than the female and a bright reddish-pink or pinkish-brown wing seam and evenly colored, sometimes checkered, fringes. The head and body are green, the antennae are orange and the legs are pink. The three silver-colored oblique transverse lines, which run parallel on the bright green wing, complete the picture that this is a feast for the eyes for me. The hindwing is yellow and the brisket is large and hairy. The female has a yellow or greenish-white wing seam and a white hindwing. There is usually a dark shadow next to the transverse lines. The wingspan is 32-38mm and the flight period is from April to September in one and sometimes two generations. Host plant: Birch, Beech, Elm, Oak, and Aspen Poplar. Dutch name: Zilveren groenuil. Frisian name: Sulveren grienûltsje. 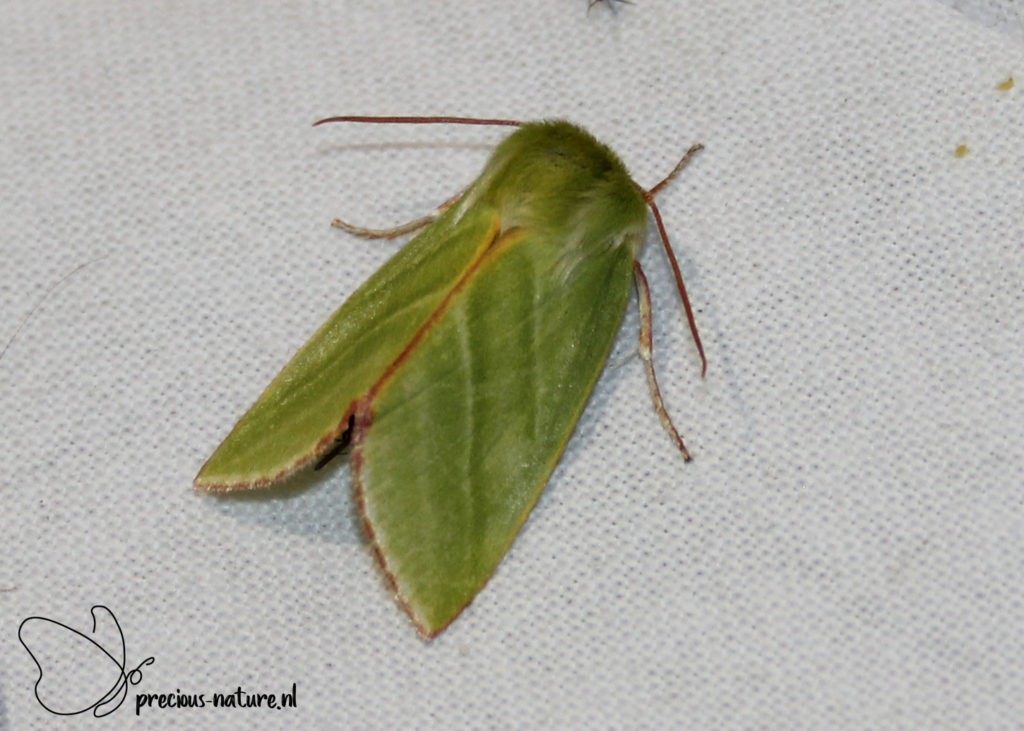 In a resting position, the Cream-bordered Green Pea (Earias chlorana) often keeps the wings roof-shaped above its abdomen. The forewing has a striking bright light green color and a white costa. The hindwing is white. The flight period is from April to October in three generations and the wingspan is 16-20mm. Host plant: Willow. Dutch name: Kleine groenuil. Frisian name: Grien wylgeûltsje. 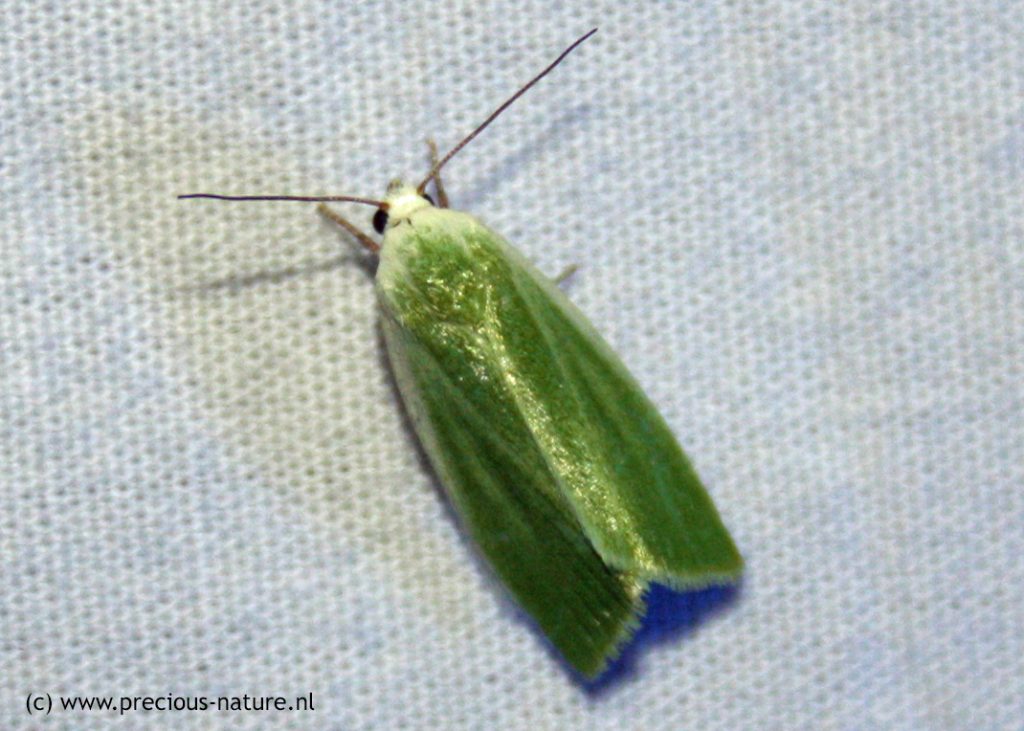 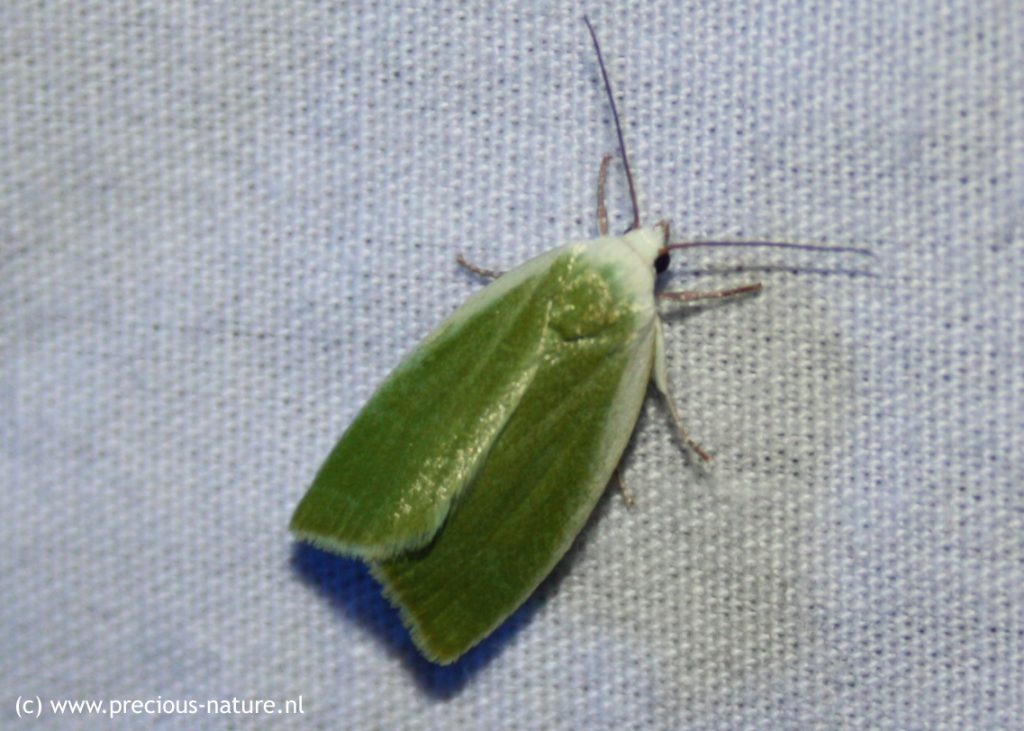 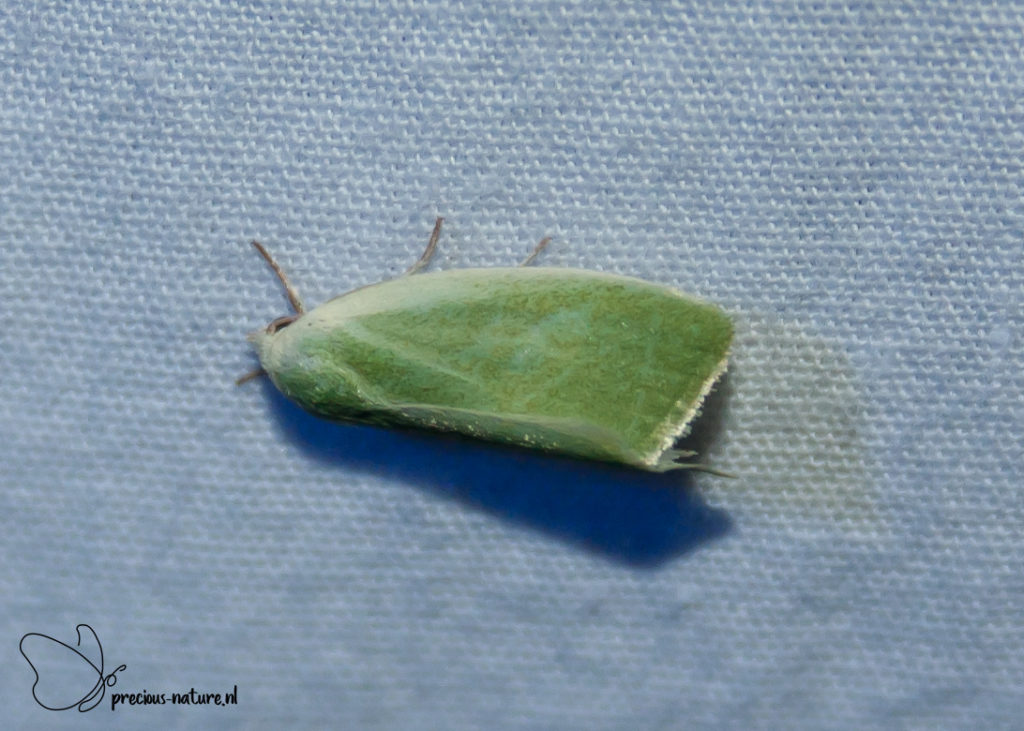 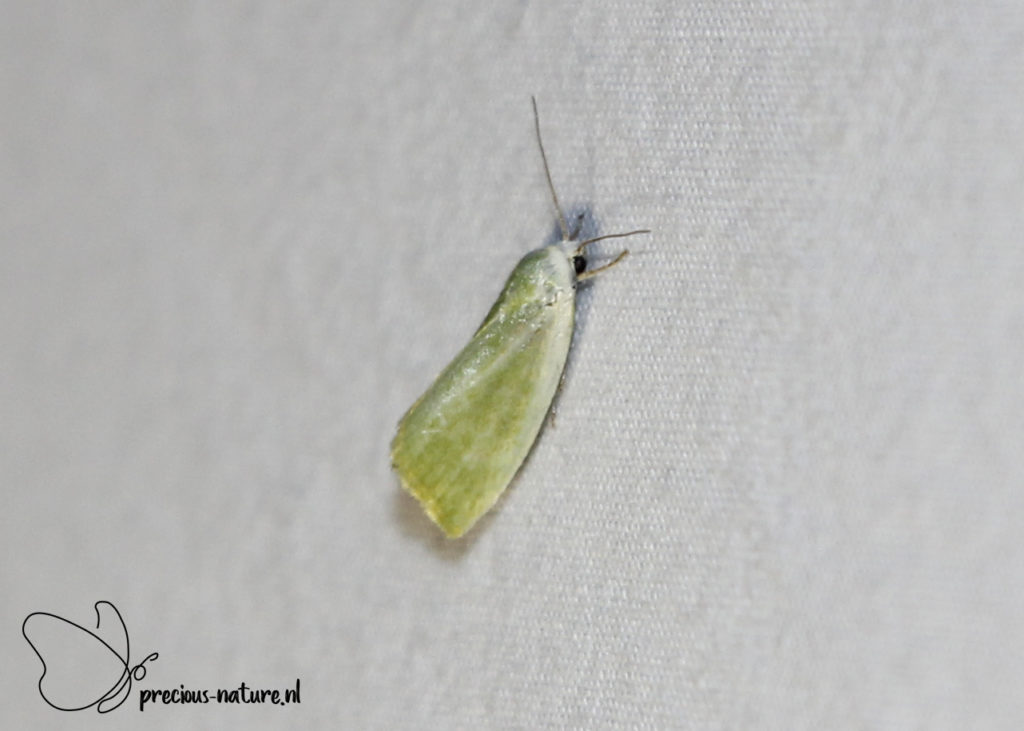 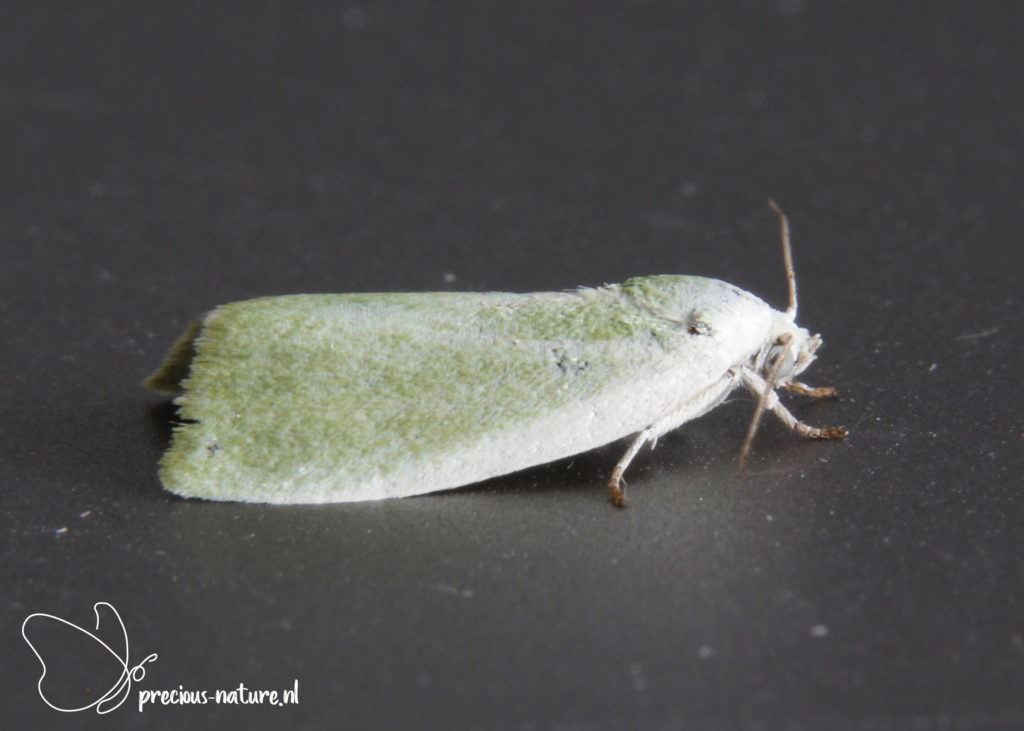 The Short-cloaked Moth (Nola cucullatella) is a nocturnal moth and is attracted to light easily. At the base of the forewing, there is a brown zone with a black border. When resting, it seems as if he is wearing a cape. The central zone is white and the rear end is brownish. It flies in one and sometimes two generations from June to September and the wingspan is 15-20mm. Host plant: Hawthorn, Blackthorn, and Apple. Dutch name: Klein visstaartje. Frisian name: – 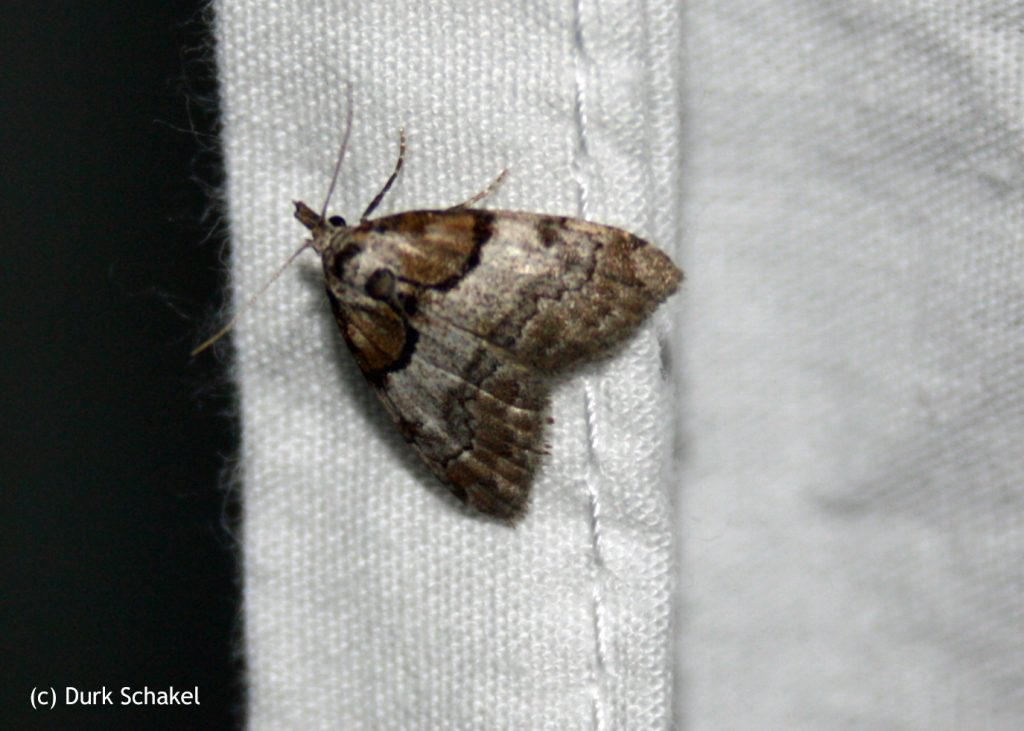 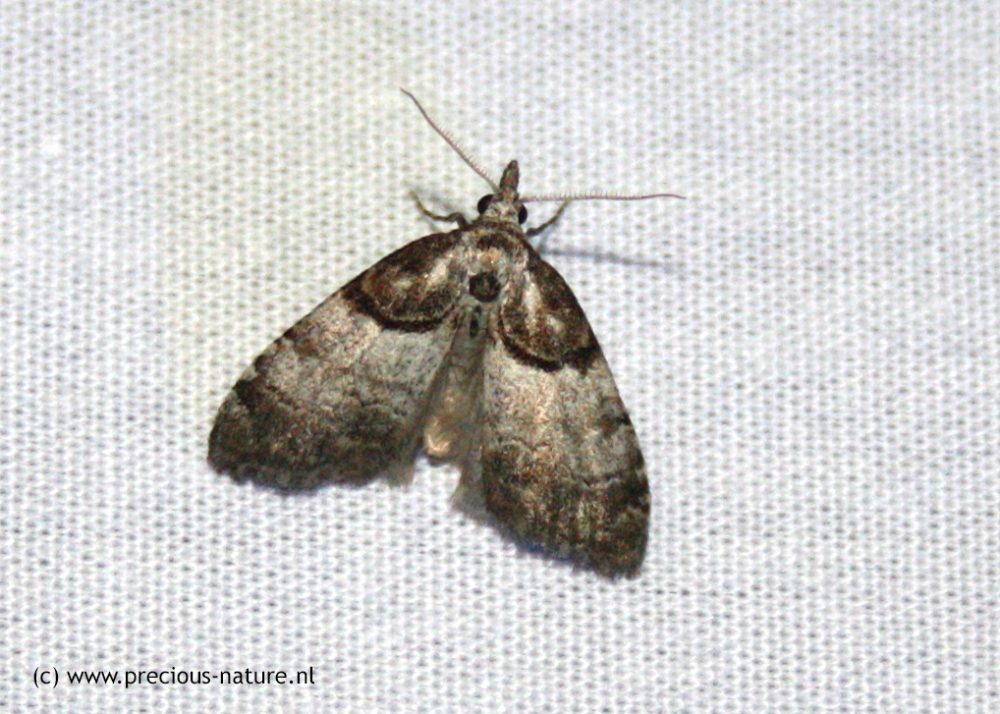 The most characteristic of the Scarce Black Arches (Nola aerugula) to distinguish this moth from other tuft moths is the thin black or brown transverse line slightly off the center of the forewing. On the inside of that transverse line is a zone of small brown and black dots. Also striking are the three dark scale pustules on the forewing, which are almost always present and in every color form. The hind wing is even light grey. The flight period is in one generation from mid-June to mid-August and the wingspan is 15-20mm. Host plant: Bird’s-foot Trefoil, Red Clover, and White Clover. Dutch name: Licht visstaartje. Frisian name: – 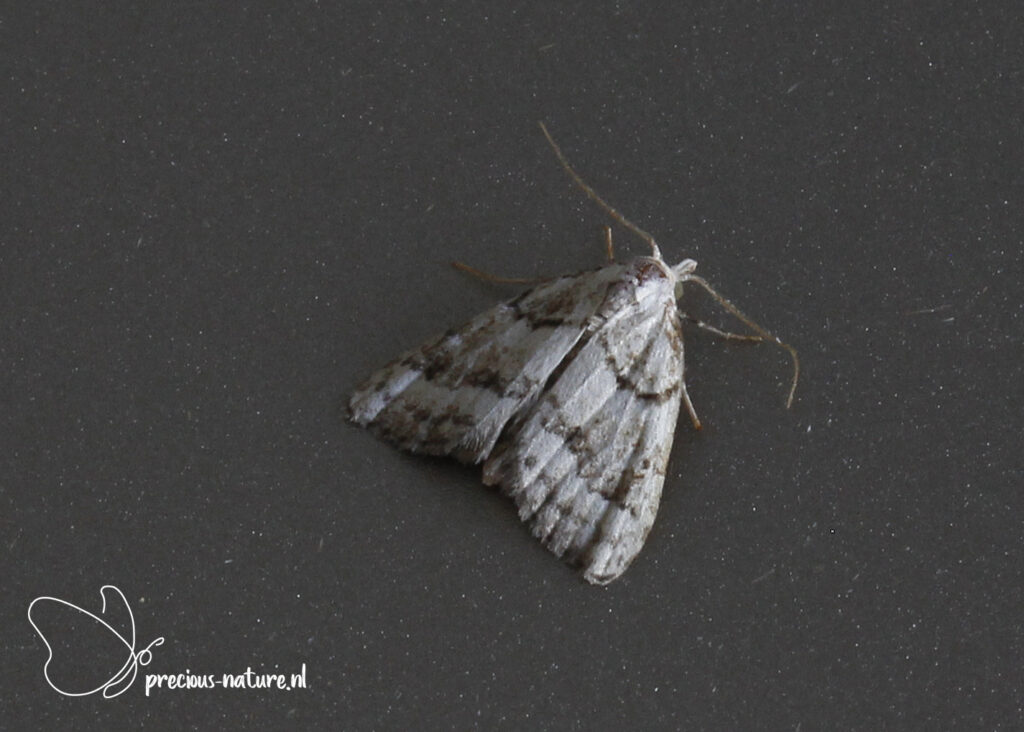