Carpenter and Leopard Moths (Cossidae) is a group of moths of which only three different species occur in the Netherlands. They are very beautiful species and a pleasure to see when you lure them on the white sheet with a special lamp. The wings are elongated and are held vertically against the body in a resting position. They are fairly large moths ranging from 15-42mm. The fact that the caterpillars live in wood does justify the name “carpenters”. That the caterpillars hibernate twice up to four times before pupating was new to me.

The Goat Moth (Cossus cossus) is a beautiful large appearance because of the drawing on the chest piece. It seems as if you see the face of a sleeping owl because of the white spot and the two black stripes underneath. Maybe others see it more like a goat. The upper side of the wing looks like tree bark with its brown tones and thin black small lines. The males often are attracted to light, but the females are not so easy to lure. The flying period is in one generation from May to September and the wingspan is 65-80mm. Host plant: Oak, Willow, Birch, and Poplar. Dutch name: Wilgenhoutrups. Frisian name: Wylgehoutflinter. 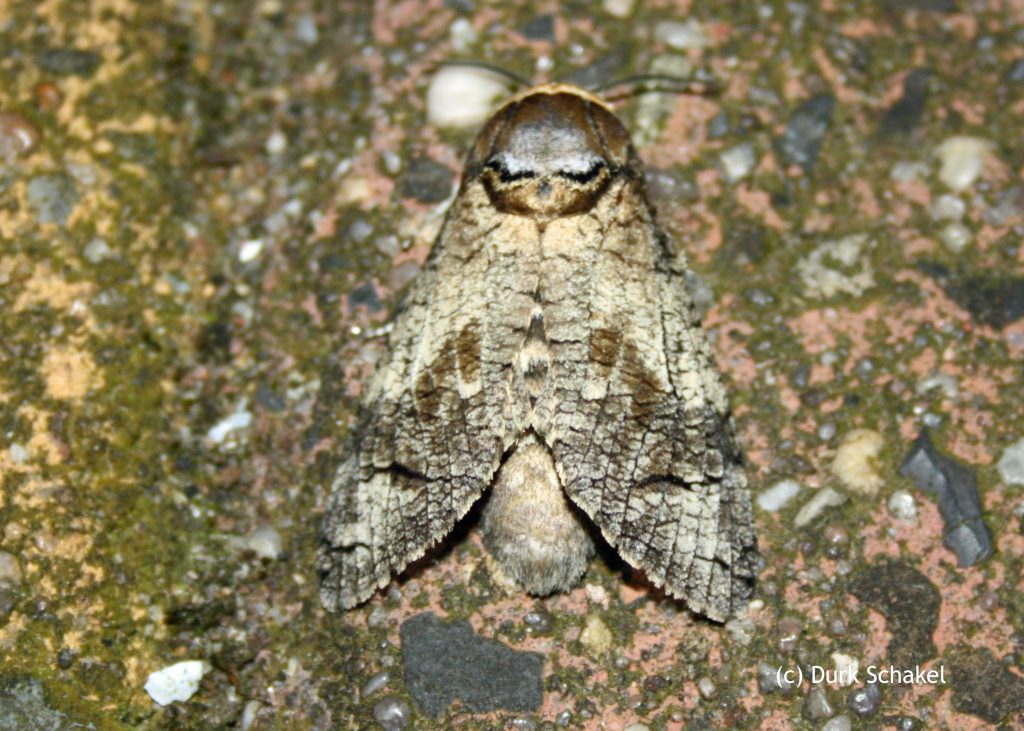 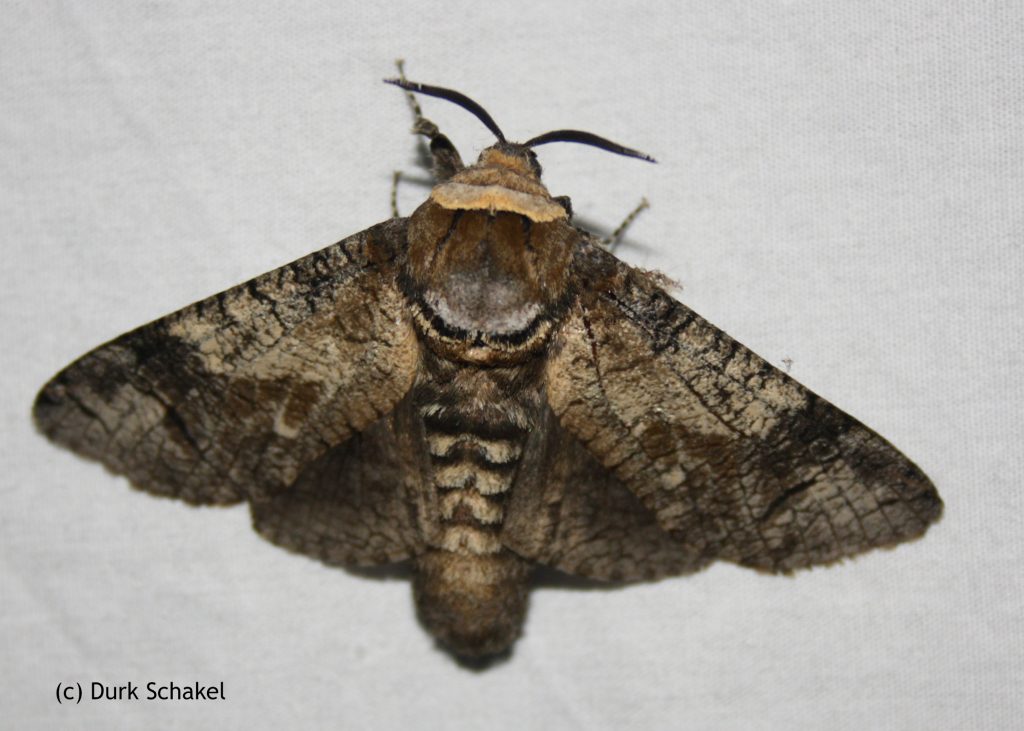 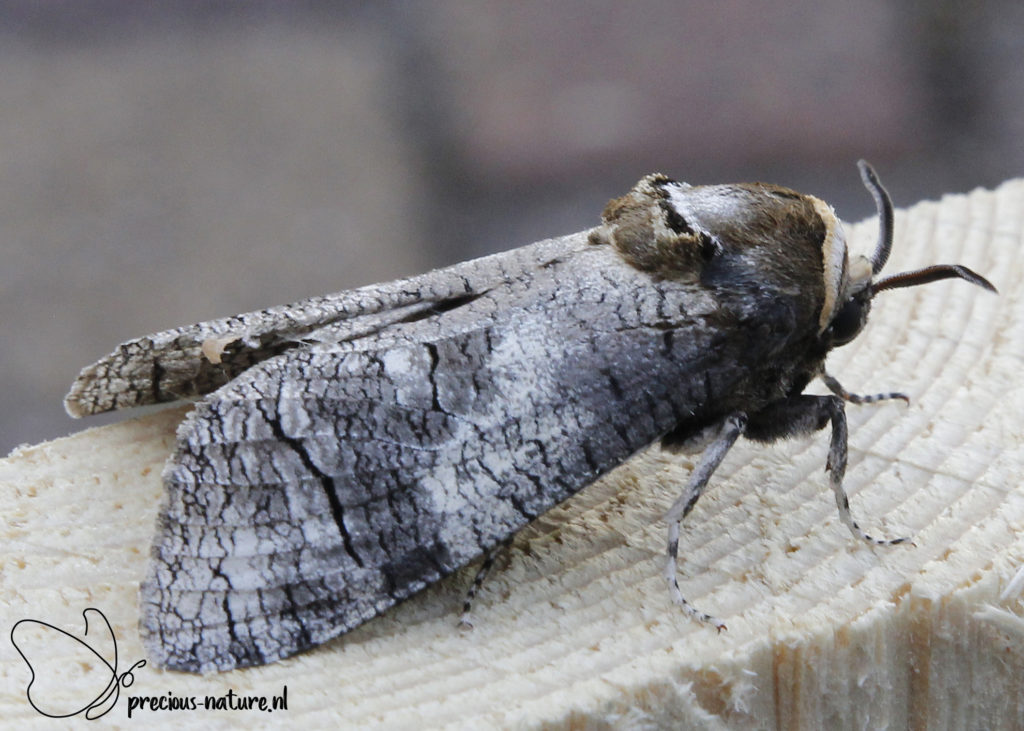 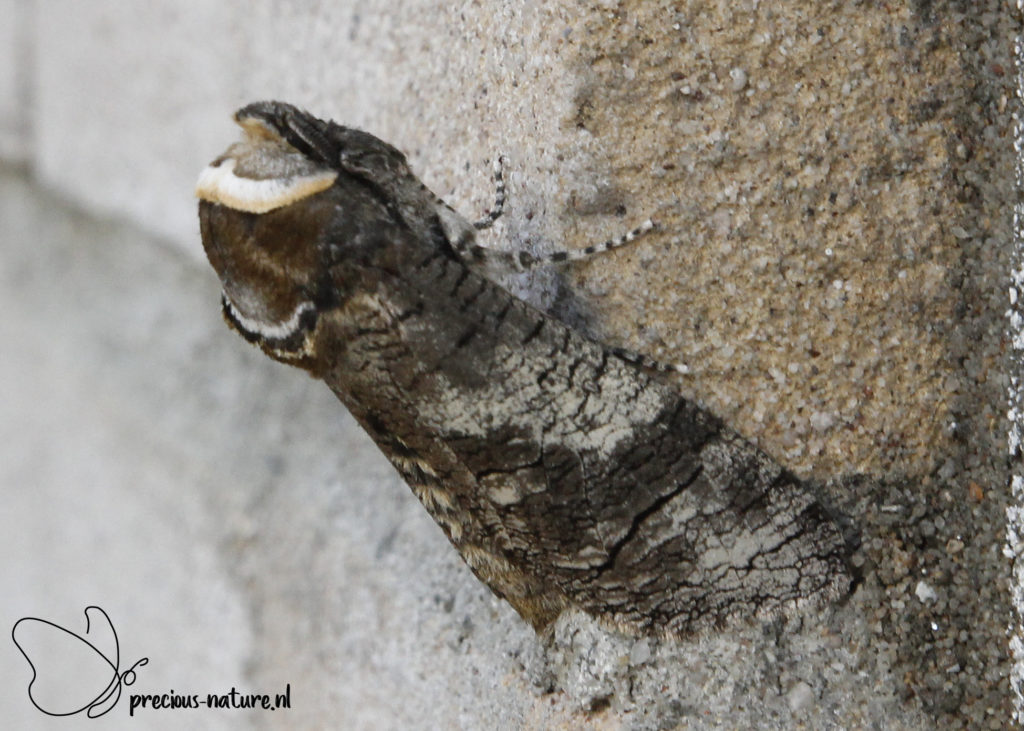 With the Reed Leopard (Phragmataecia castaneae) I have completed all family species that occur in the Netherlands. The most special thing about this leopard moth is that the abdomen protrudes far behind the rounded wings when it is in the resting position. This is more extreme in the female. On the slightly translucent light yellow wings, there is only a black speckling. The wingspan is 30-46mm and the flight period runs from May to August in one generation. Host plant: Common Reed. English name: Reed Leopard. Frisian name: Reidloaihoars. 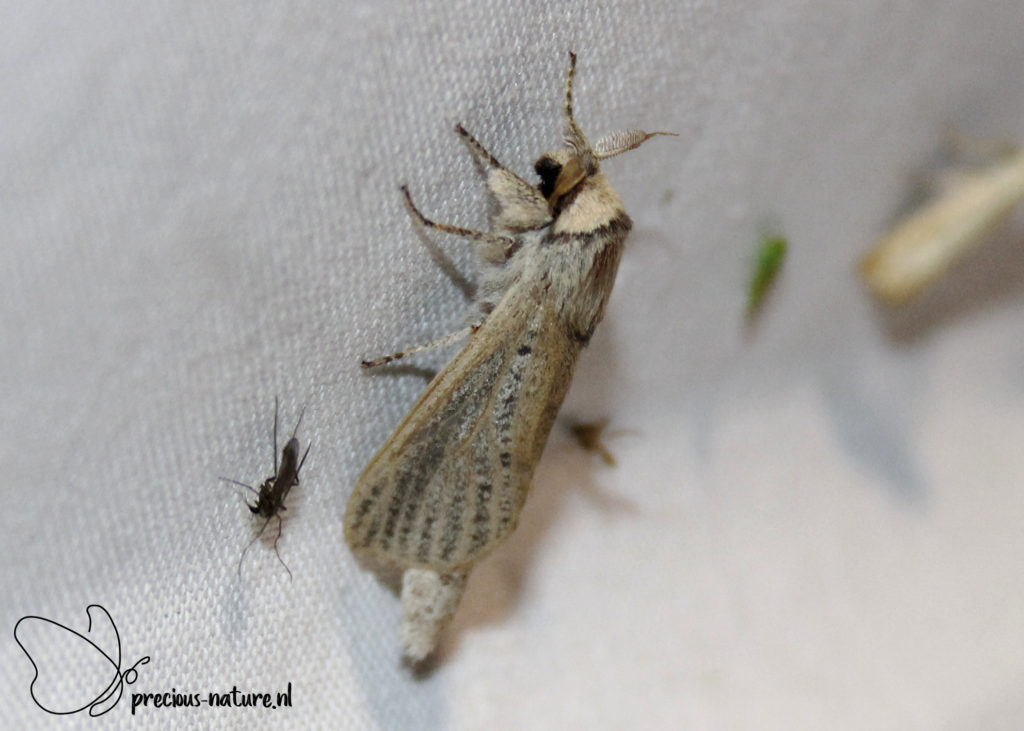 The Leopard Moth (Zeuzera pyrina), also called Mourning Moth, lives up to its English name more than the Dutch one. The wings are white translucent with black spots. On the white body, you can clearly see six black spots on the thorax in two parallel rows. The wing is transparent and you can clearly see the veins that are colored brown. When I saw this moth attracted to the UV-light, I was really surprised that this moth flies around in my garden at night. The wingspan is 44-70mm. The flying period is in one generation from May to September. Host plant: Blackthorn, Plum, Hawthorn, Apple, Pear, private, Ash, Elms, Oak, and Beech. Dutch name: Gestippelde houtvlinder. Frisian name: Stippelflinter. 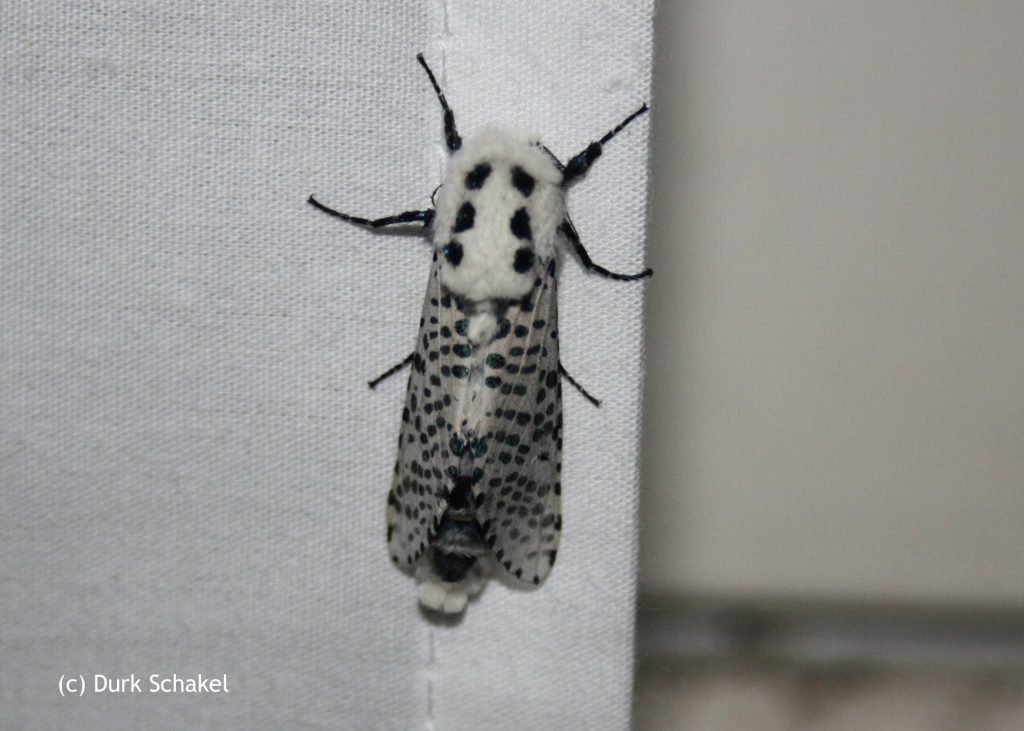 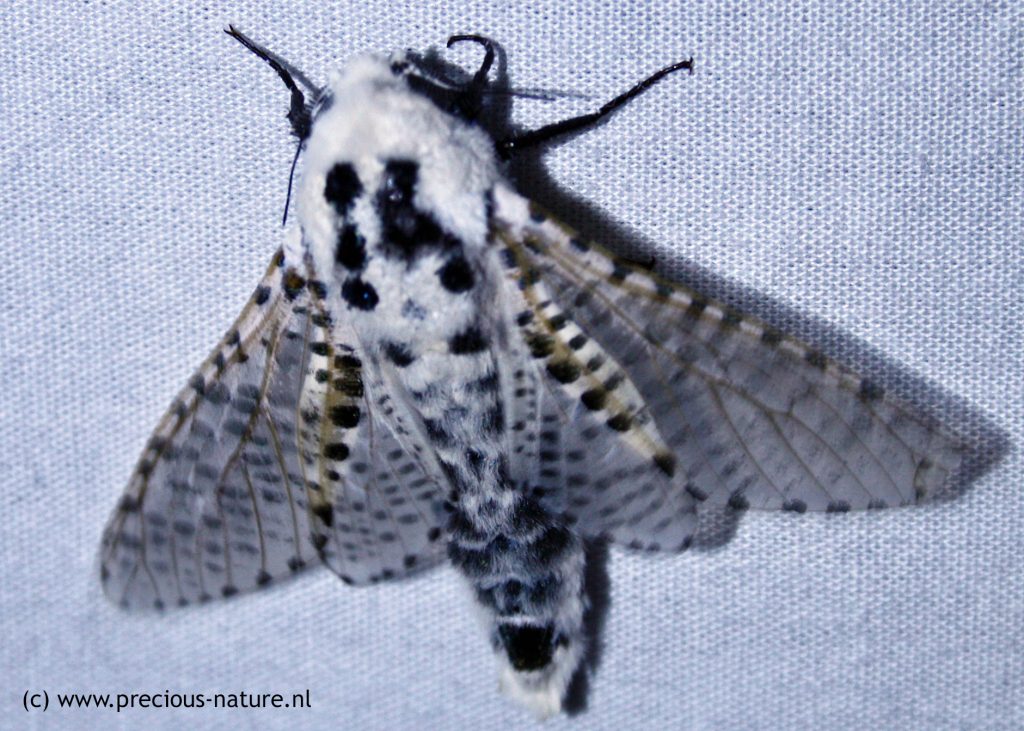 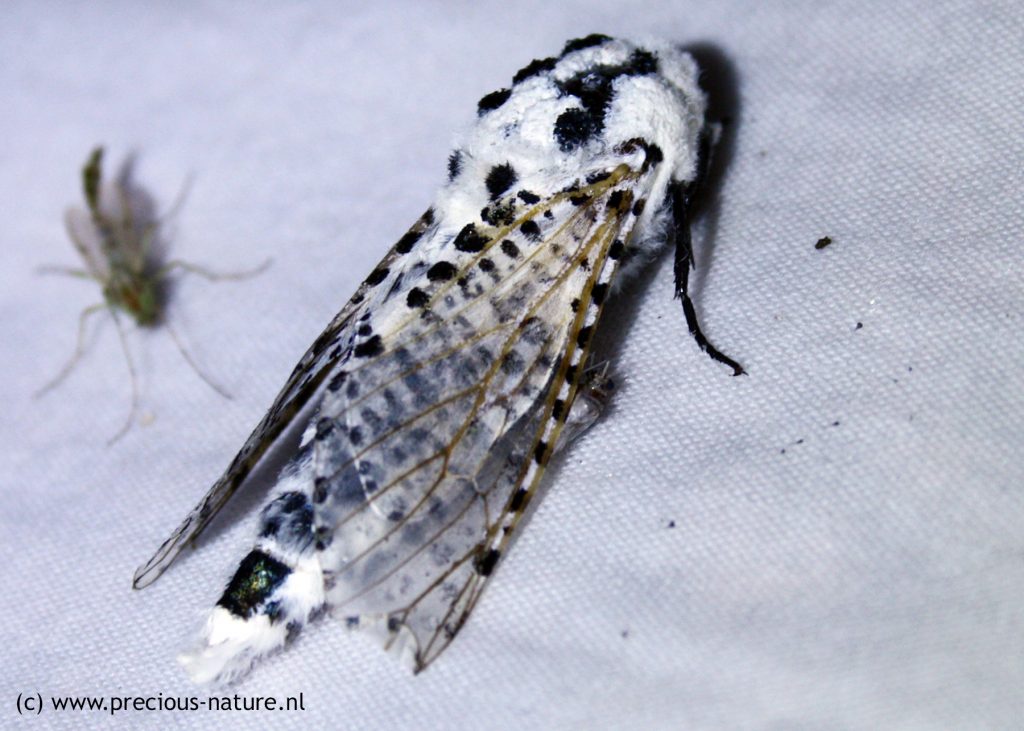