The Swallowtails (Papilionidae) are a family of large colorful butterflies that are recognizable to most people. The entire family consists of about 550 species worldwide, but only 3 are known in the Netherlands. This is because most species can be found more in a tropical environment. Their name refers to the short tail that is situated on the edge of the hindwing. The function of this tail is unknown, but genetic studies in some species have shown that it is a labile trait of a specific gene. All swallowtails have three pairs of walking legs, and adults of all species visit flowers for nectar.

In the Netherlands, the Scarce Swallowtail (Iphiclides podalirius) is hardly seen. He only appears as a vagrant. During my holidays in Montenegro, where I took a day trip to Bosnia-Herzegovina with my daughter, we came across this swallowtail at a monastery. Unfortunately, it was a very damaged copy. The tails, which are normally on the dorsum of the hindwing, were completely gone. The base color of the wings is white to cream-colored. On the forewing, there are a number of wedge-shaped black stripes that tapers from the front edge of the wing to the middle. On the hindwing at the dorsum, there are a number of blue moon spots that are outlined in black. Those were already gone with the specimen we have seen. The wingspan is 60-90mm and the flight period is from May to September up to three generations. Host plant: Blackthorn. Dutch name: Koningspage. Frisian name: Keningspaazje. 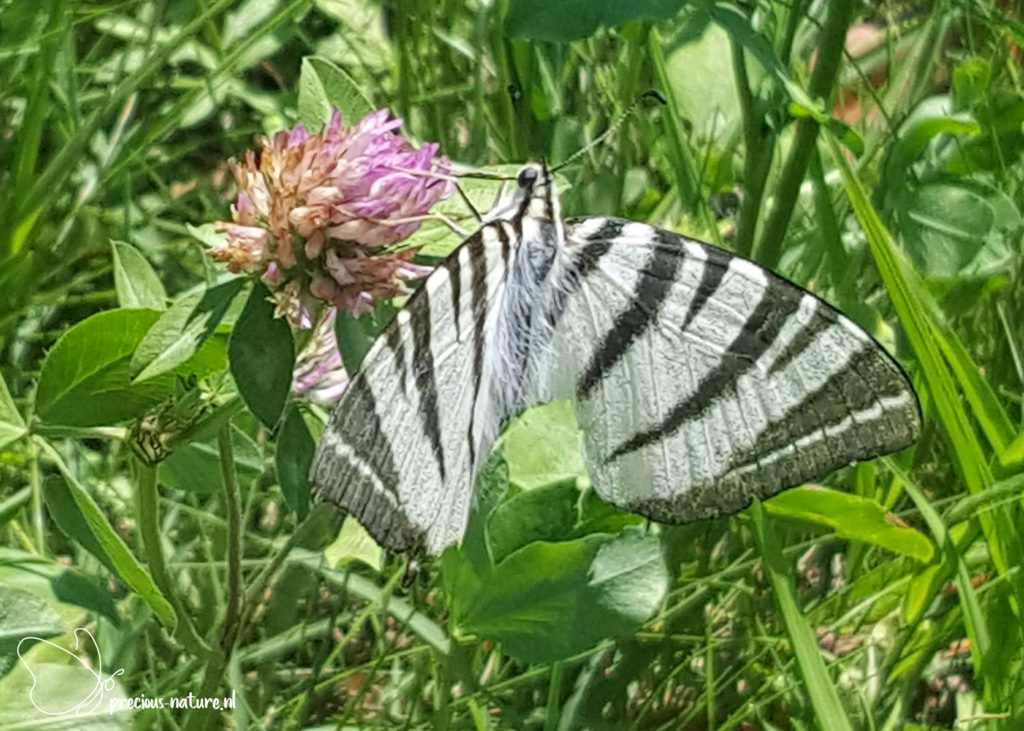 To discover the Swallowtail (Papilio machaon) in the Netherlands, you should not be in the North. I spotted my first specimen in Trebinje (Bosnia and Herzegovina) where I was on holiday with my daughter. We were both very hyper to see such a beautiful butterfly for the first time. It took quite a long time before this beautiful swallowtail sat down to be photographed. And when he sits down, it is quite special that he sits exactly with my daughter on her smartphone, which she had ready to take a photo. The wingspan of the Swallowtail is 80-90mm and has wings with yellow ground color. On the top of the fore-and hindwing, you can see a wide blue band along the termen that is outlined in black. At the termen of the hindwing is a tail and you see a red spot at the inner edge corner. The body is yellow at the bottom and black at the top. The flight period is in two generations from late April to September. Host plant: Wild Carrot and Wild Angelica. Dutch name: Koninginnepage. Frisian name: Keningjinnepaazje. 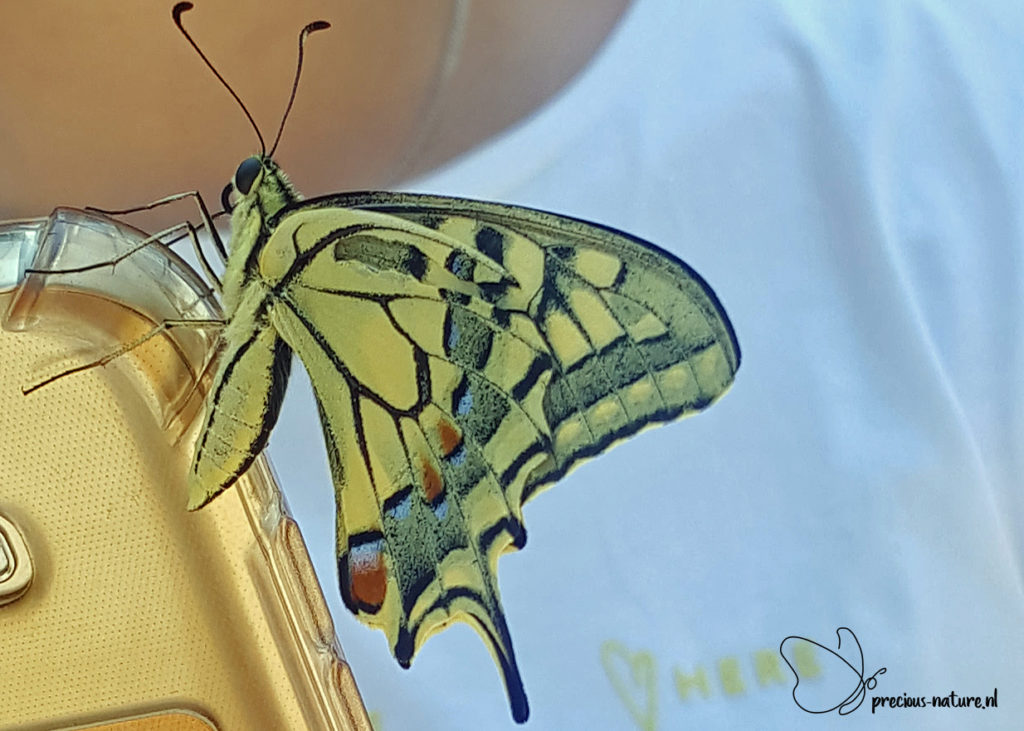 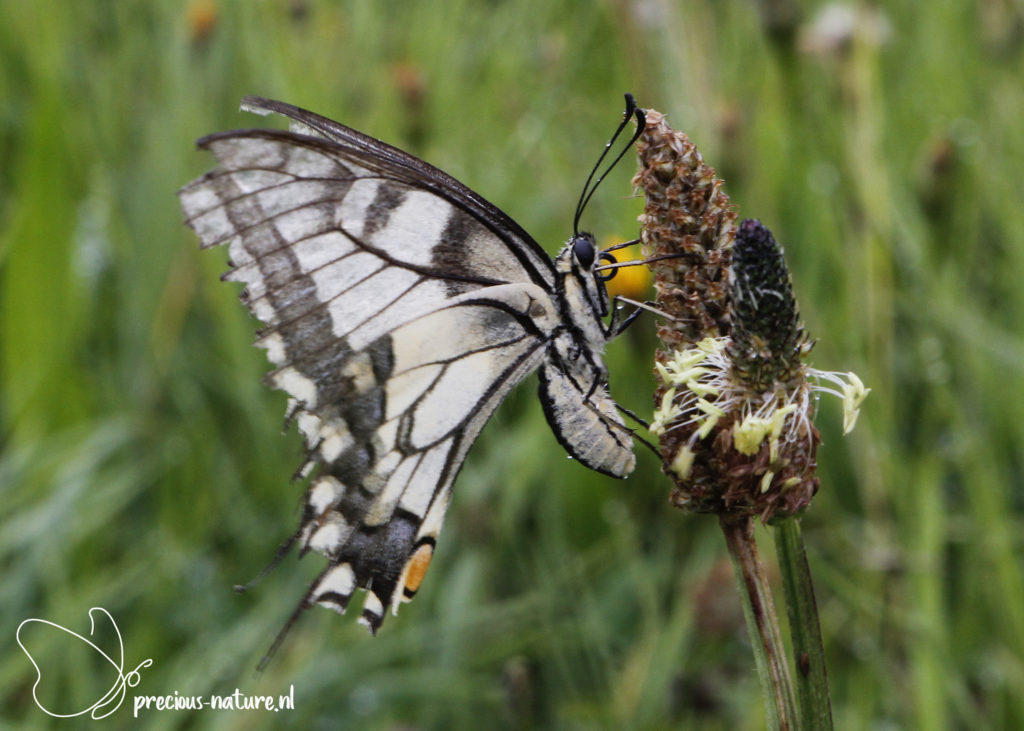 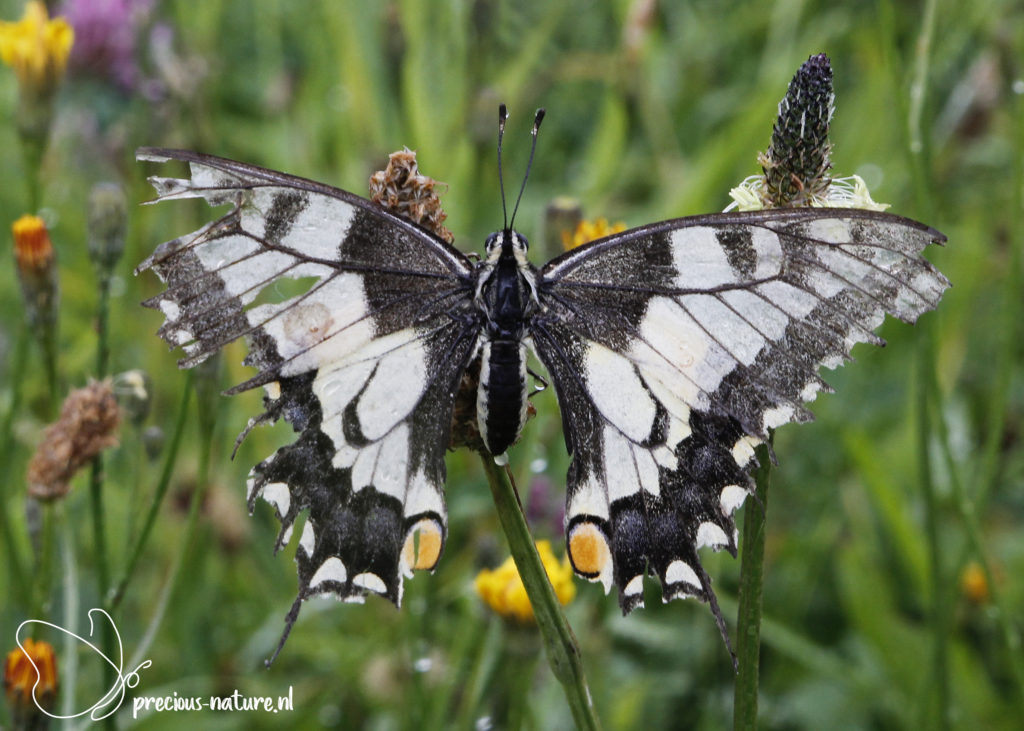 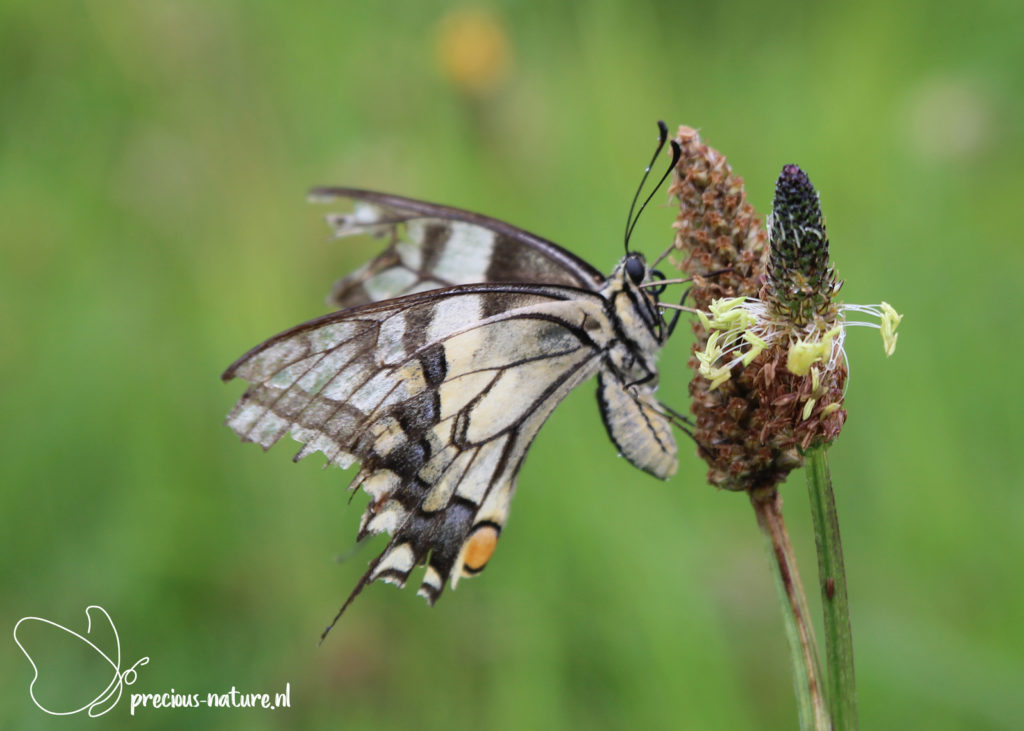 During my holiday in Bali, I discovered the Golden Birdwing (Troides amphrysus) which is quite common in Indonesia on montane forests at low to medium altitudes (30-1000m). In the male, the upper sides of the forewing are black or dark brown, with veins fringed by pale yellow. The upper side of the hindwing is golden yellow, with black veins and black spots on the edges. The base color of the female is black or dark brown, with veins bordered by white. The upper side of the hindwing has a smaller golden-yellow area at the base and several yellow spots at the edges. In both sexes, the undersides are equal to the tops. The abdomen is yellow, while the head and thorax are black. In the morning the butterflies fly at a height of 20 to 30m in the canopy. Females rest on the foliage, while males glide above them in wide circles. The males perform an elaborate, vibrating seduction several feet above the females before mating. Later in the day, both sexes descend to feed on flowering trees and shrubs. The flight period is throughout the year and the wingspan is 150-180mm. Host plant: Indian Birthwort. Dutch name: Goudgekleurde page. Frisian name: – 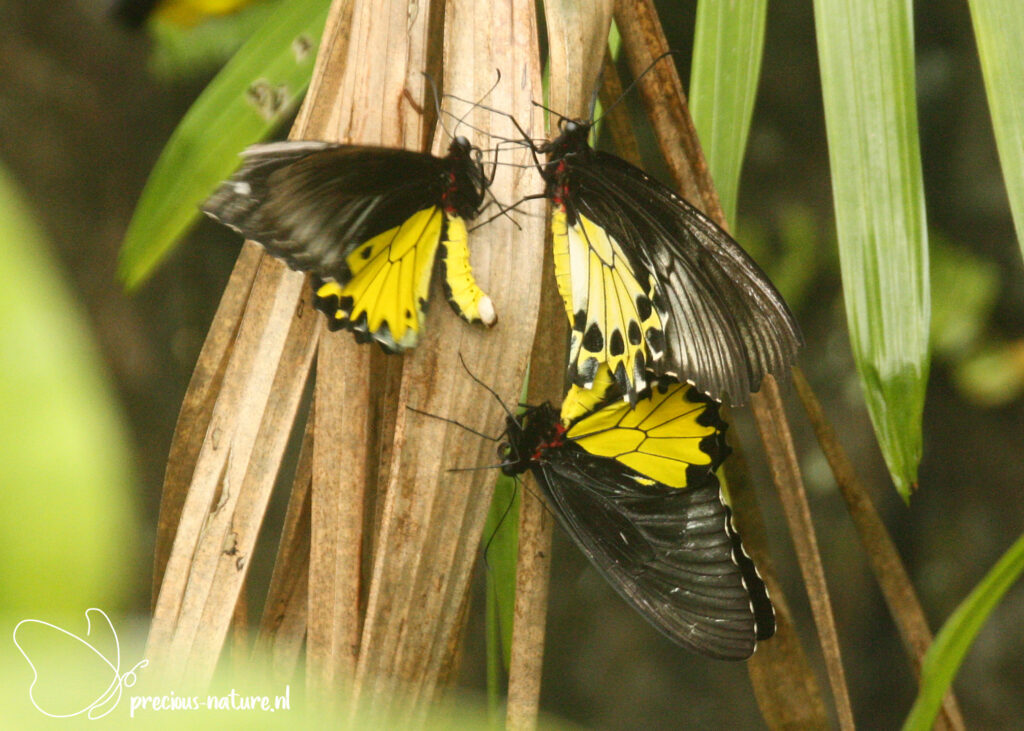 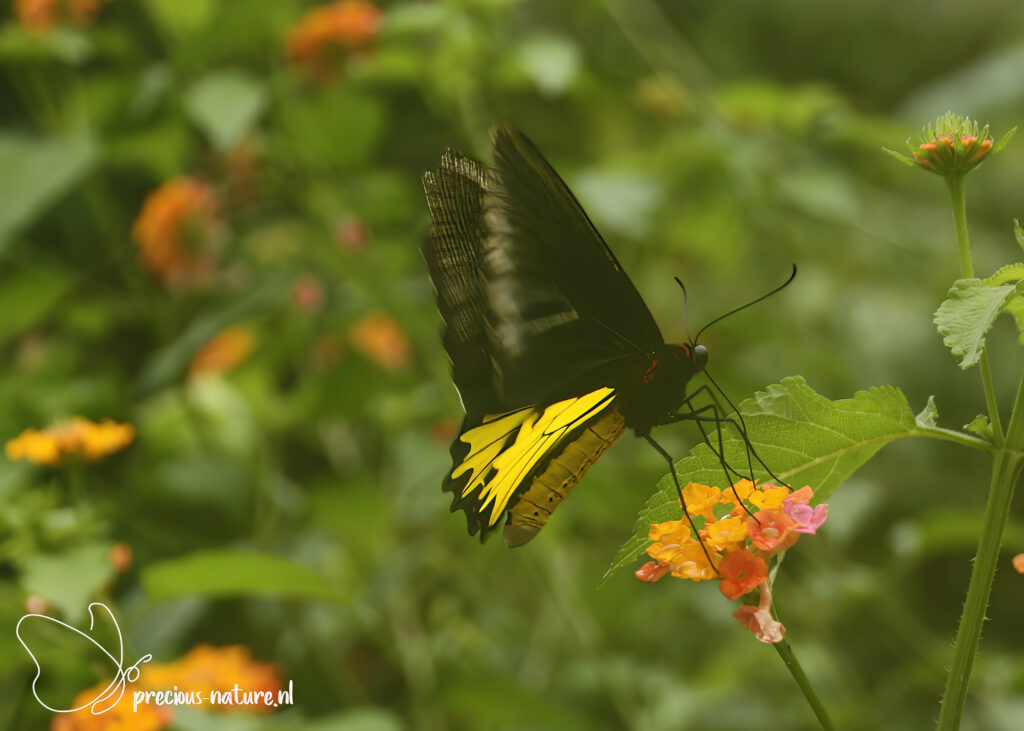