In my experience, it is very difficult to distinguish the Blues (Polyommatinae), a subfamily of the Gossamer-wing butterflies (Lycanenidae), if you don’t know which aspects are the important differences. An important aspect is that the underside of the forewing is white, grey, or light brown (never orange) with black dots or dark stripes. A second important aspect is the presence or absence of a spot at the base on the underside of the forewing. In addition, the presence of a central spot on the top of the wings, whether or not a continuation of orange moon spots on the underside, and the white or checkered fringes play an additional role in the decision for the correct species. For the Common Blue, Brown Argus, and Silver-studded Blue, the distinction can be easily obtained from the underside of the rear wing. The Silver-studded Blue often has a white band along with the moon spots and the Common Blue and Brown Argus have a white cone (marked blue). The Common Blue has the front three dots in a row and the Brown Argus like a “hockey stick” (indicated in red). 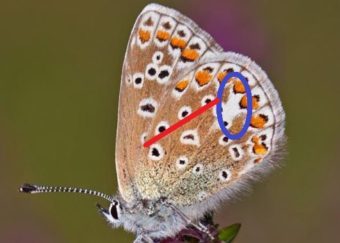 A blue that originally comes from South Africa, which has spread a bit more over Europe, but is rarely spotted in the Netherlands, is the Geranium Bronze (Cacyreus marshalli). I did not spot this butterfly in the Netherlands, but in Montenegro where I was on holidays. The underside of the wing is most characteristic. They are marbled brown-white. The hindwing has a small tail at the tornus and there are also striking spots. The top of both wings are brown and the fringes are strong white with dark brown bands. The flight period for the Netherlands is in July and August and the wingspan is 14-27mm. Host plant: Geranium and Pelargonium. Dutch name: Geraniumblauwtje. Frisian name: Geraniumblaujurkje. 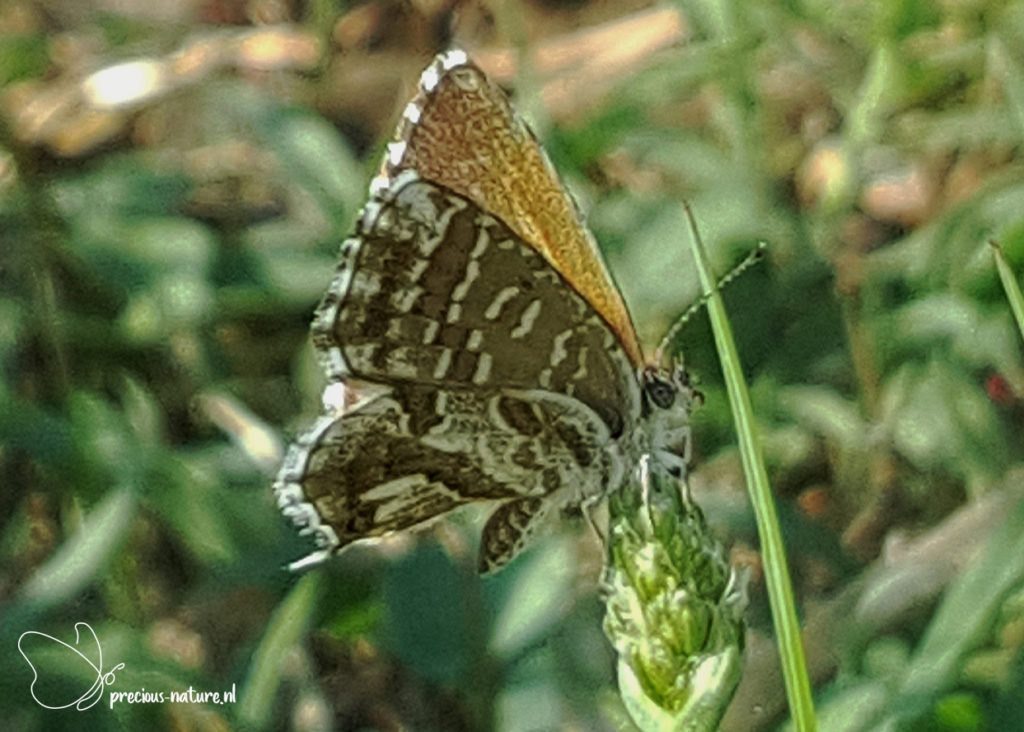 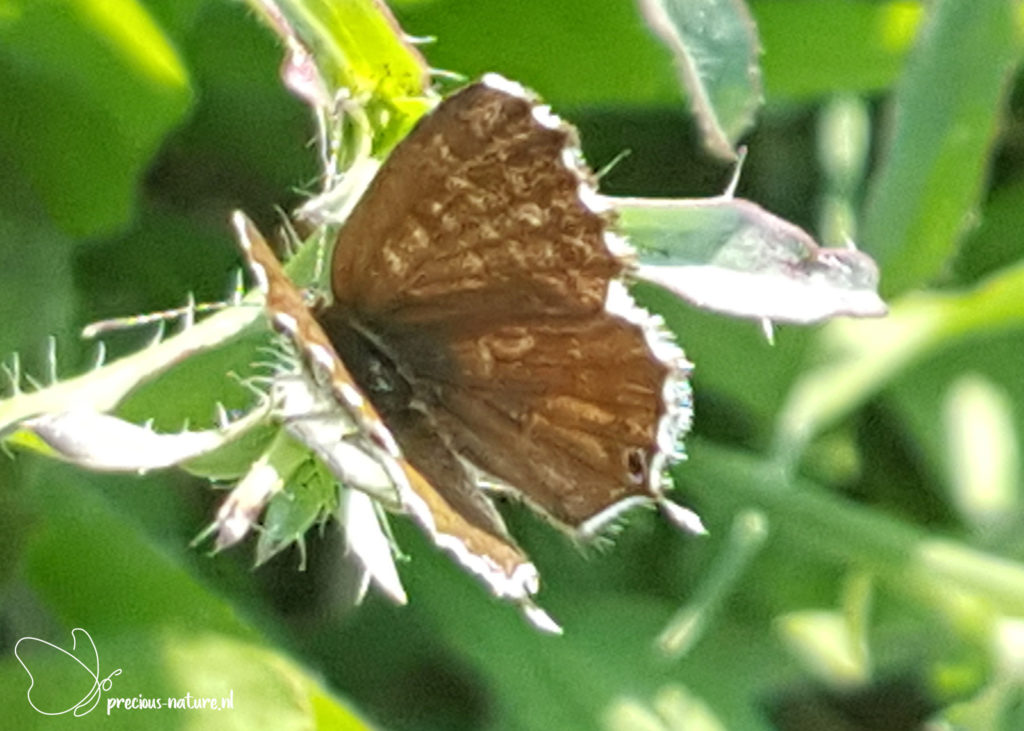 The Holly Blue (Celastrina argiolus) is a butterfly that flies around in two or three generations from March to September. It tends to fly high around bushes and trees, whereas other grassland blues usually stay at ground level. This species is fairly easy to recognize. The top of the male and female are violet-blue with the males having narrow black wing edges and the females having a broad black wing edge. The underside is white to silver-blue with small black dots which distinguish them from Common Blue (Polyommatus icarus). The wingspan is 35mm. Host plant: Holly, Spindle, Ivy, Dogwood, Snowberry, and Bramble. Dutch name: Boomblauwtje. Frisian name: Sprakelbeamblaujurkje. 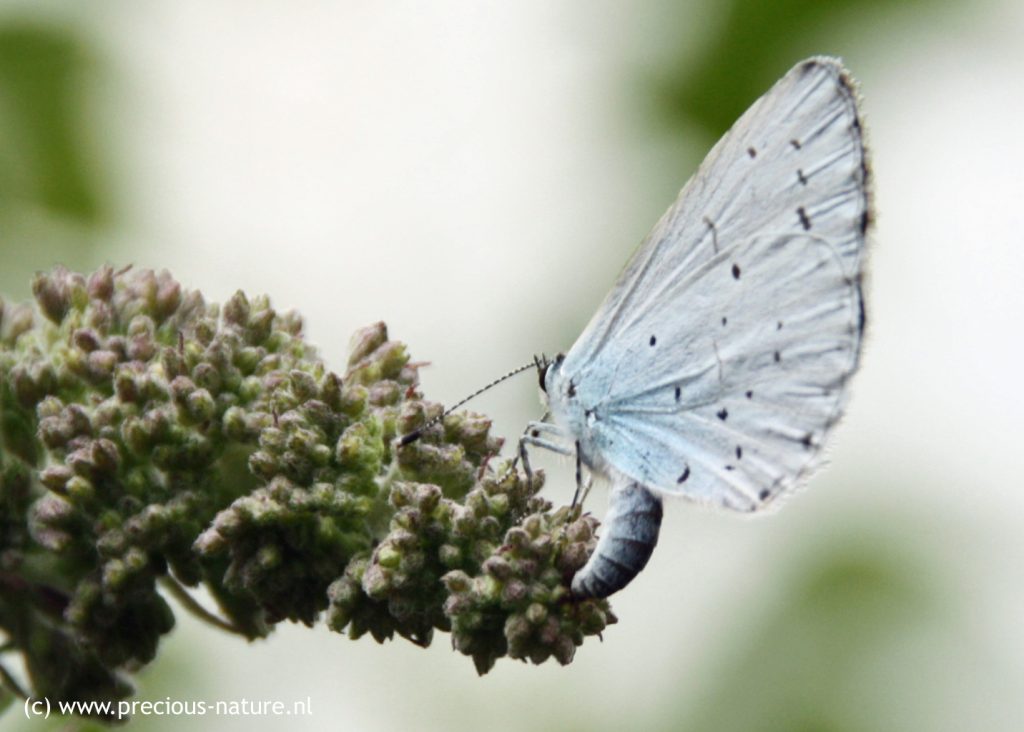 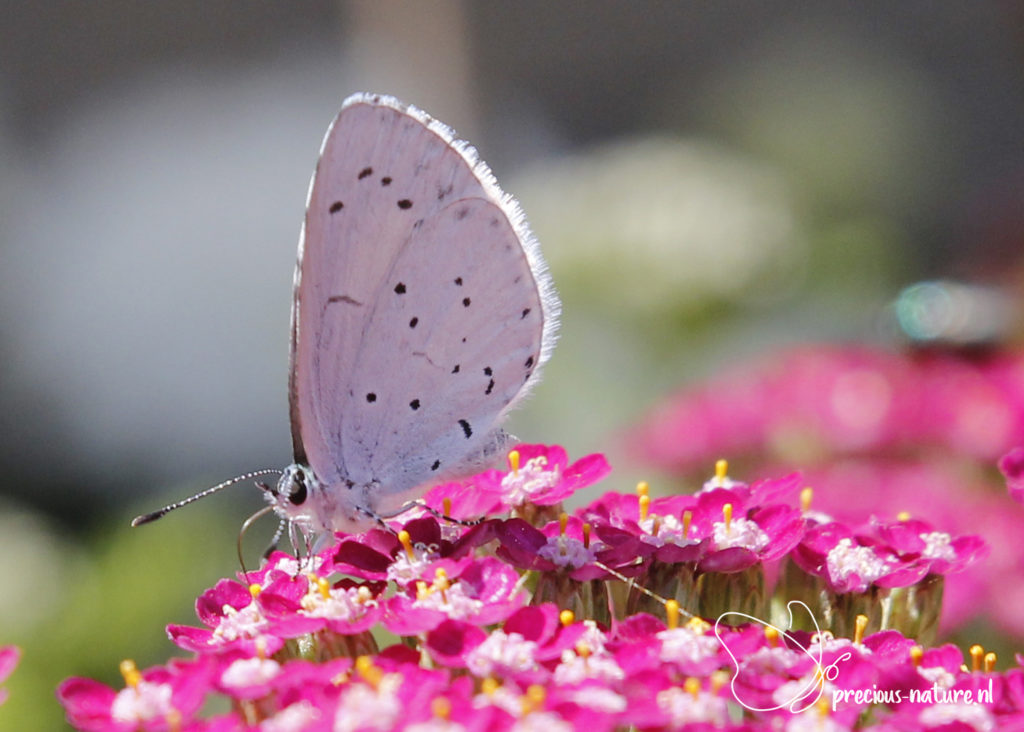 The Long-tailed Blue (Lampides boeticus) is a butterfly that occurs mainly in southern Europe in several generations from March to September. The butterfly gets its name from the wispy ‘tails’ on the dorsum of each of its hindwing, which flutter in the breeze. The underside of the hindwing has a clear white band in the marginal area and numerous narrow white lines. On the top near the base, a prominent black spot and one next to it at the inner edge corner could be seen. With these spots they fool birds into thinking this is the head of the butterfly, allowing it to escape any attacks unharmed. Males are more violet-blue and females have a mix of duller blue and brown. The underside of both sexes is sandy brown crossed by numerous white, wavy lines. The wingspan is 32-42mm. Host plant: Bladder-senna, Broad-leaved Everlasting-pea, and Broom. Dutch name: Tijgerblauwtje. Frisian name: Tigerblaujurkje. 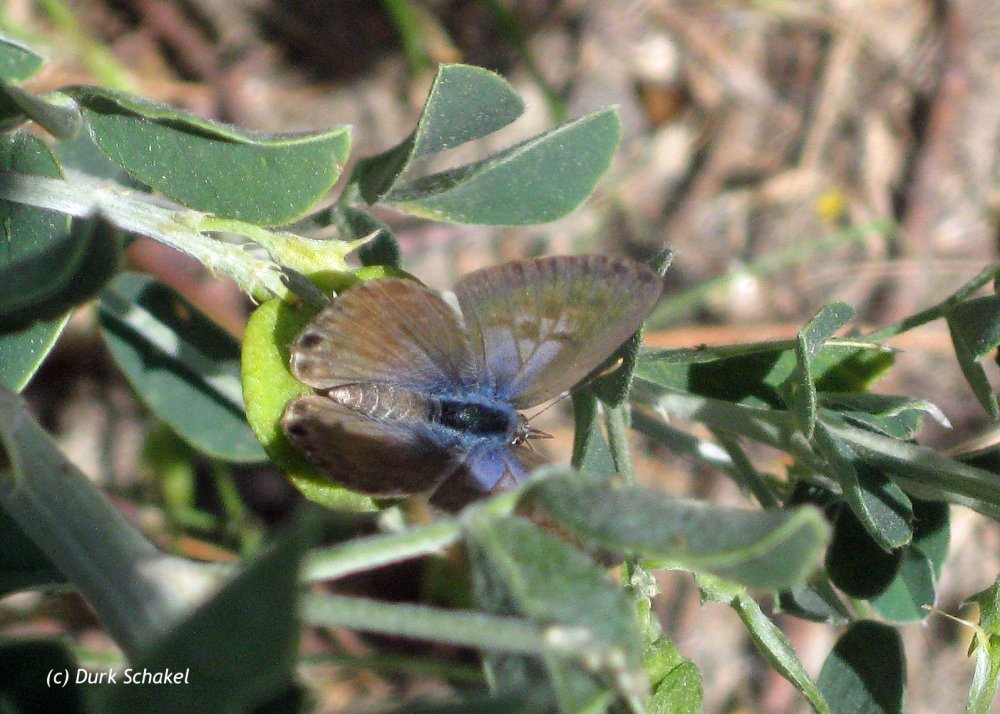 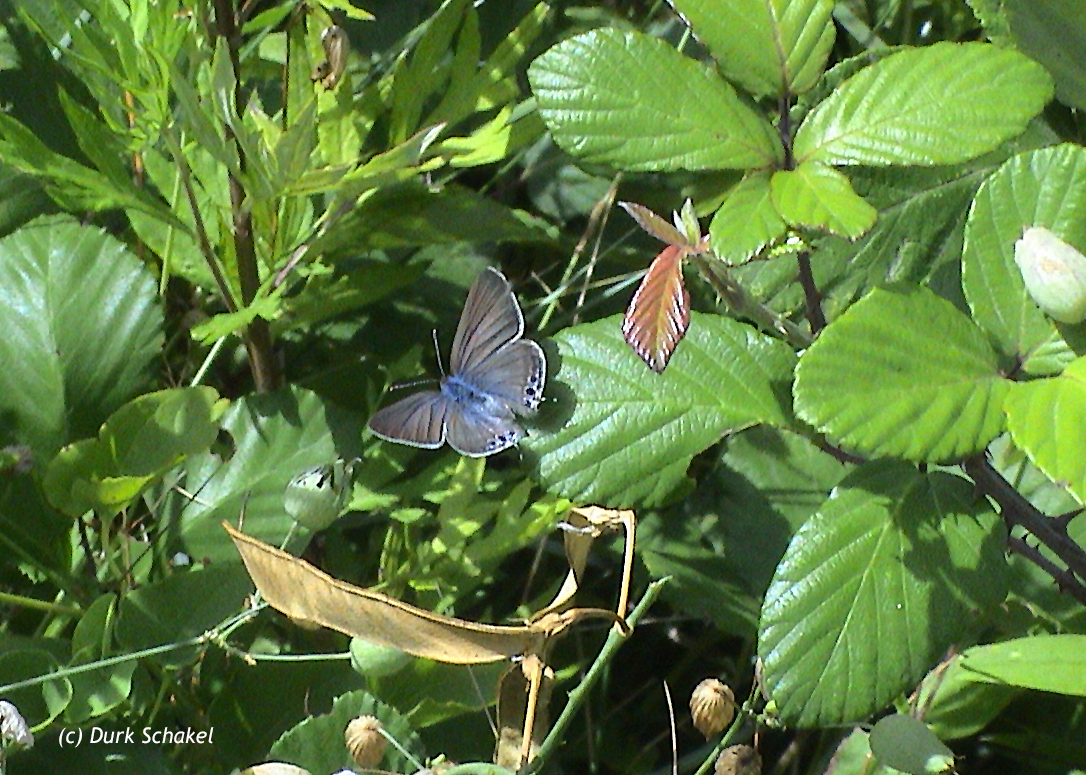 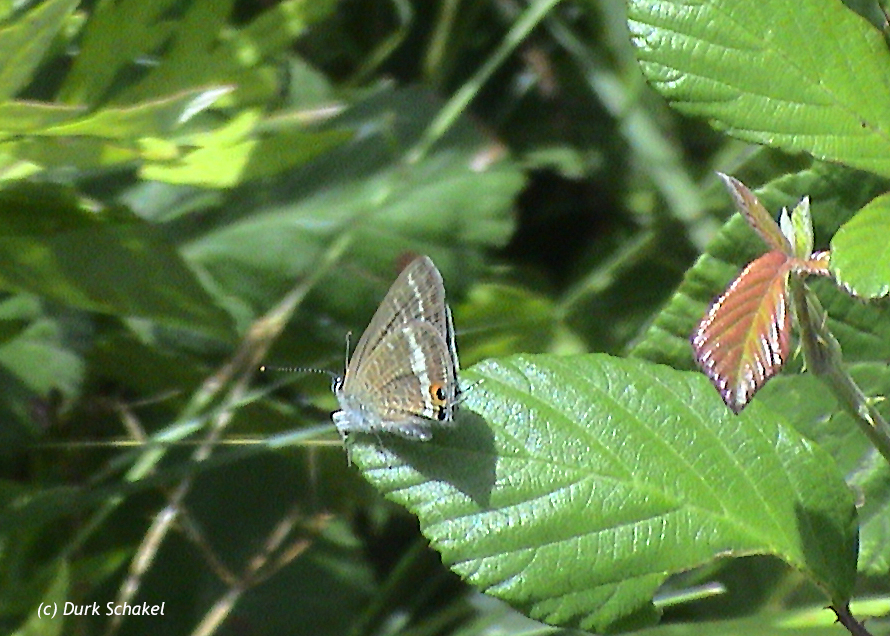 A variant of the Long-tailed Blue (Lampides boeticus) is the Lang’s Short-tailed Blue (Leptotes pirithous). This butterfly flies around in several generations from March to October and usually only in Southern Europe. The underside of the hindwing is brownish grey with irregular white lines and without the clear white band like the Long-tailed Blue. The top of the male is purplish-blue while the female is blue with broad brown edges and dark brown spots. The wingspan is 26-34mm. Host plant: Rosemary and Gorse. Dutch name: Klein tijgerblauwtje. Frisian name: Lyts tigerblaujurkje. The Cassius Blue (Leptotes cassius) is found in subtropical areas. I spotted this one in Medellin (Colombia). This blue is very similar to his family member the Lang’s Short-tailed Blue (Leptotes pirithous) found in the Mediterranean. The Latin name “cassius” means “false”. The Cassius Blue does not have small tails on the hindwing and has two black trailing spots on the bottom of this wing. The Lang’s Short-tailed Blue has an orange band around the two black spots, where there is a lack of for the Cassius Blue. Furthermore, a clear white band can be seen just before the moon spots, where brown spots can still be seen with his family member. The male is purple-blue at the top and the female white with black-brown edges and spots. The top of the hindwing is mainly white. The wingspan is 20-35mm. Host plant: Ornamental leadwort, Rattlebox, and Hairy Milk Pea. Dutch name: Vals tijgerblauwtje. Frisian name: – The Adonis Blue (Lysandra bellargus) is a butterfly found mainly in southern and central Europe, flying in two generations from late April to October. The top of the male is shiny sky blue with a very narrow black border. The female has orange moon spots at the top of the wings which are often chocolate brown with blue pollination. Both sexes have distinctive black lines that enter or cross the white fringes of the wings. The wingspan is 38mm. Host plant: Horseshoe Vetch. Dutch name: Adonisblauwtje. Frisian name: – 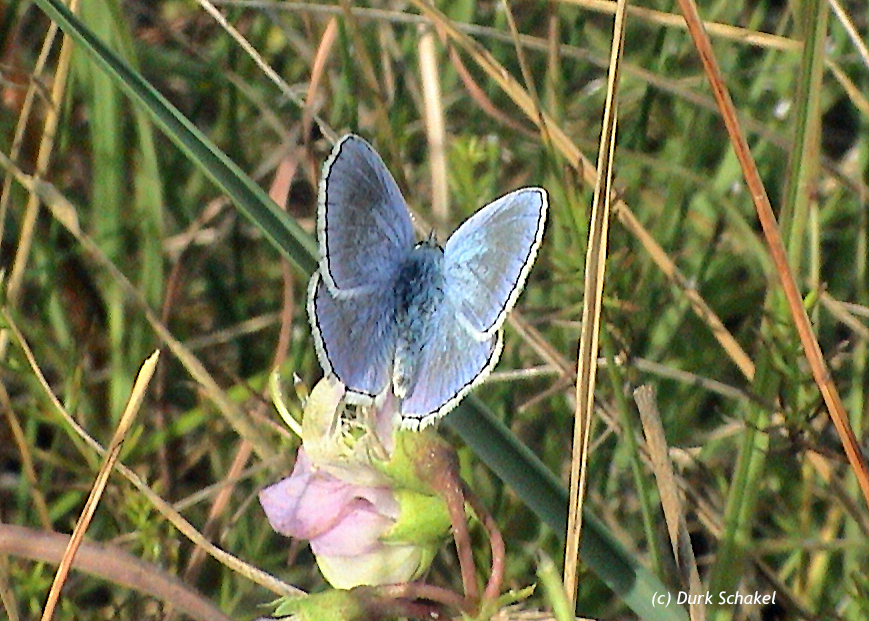 The Silver-studded Blue (Plebejus argus) is a very small blue that often flies around in one generation from May to August. This butterfly is fairly difficult to recognize, with the black spots at the underside of the forewing usually drawn as a kind of question mark. The male is violet-blue at the top with mostly broad dark edges. Females are brown with a row of red spots. Undersides are brown-grey with black spots, a row of orange spots, and small greenish flecks on the outer margin. There are no root spots on the underside of the front wing. The wingspan is 29-31mm. Host plant: Heather. Dutch name: Heideblauwtje. Frisian name: Heideblaujurkje. 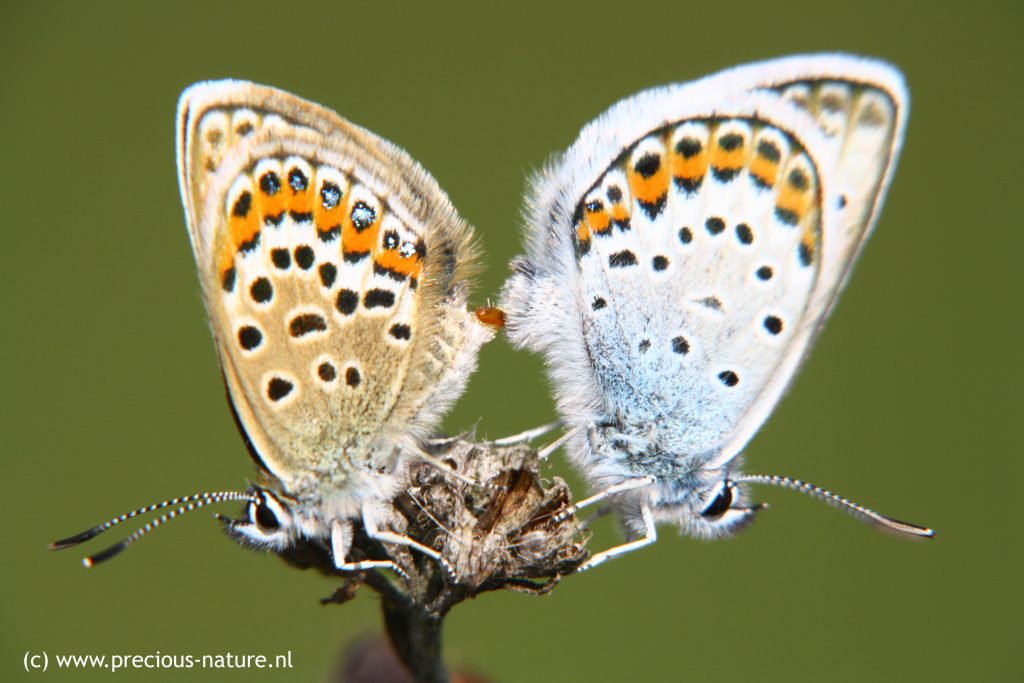 One species often mistaken for others is the Common Blue (Polyommatus icarus). This most common blue flies around in one to several generations in the period from April to October. The top is blue in the male and brown in the female, often with a violet-blue haze. On the underside of the forewing, there are two base spots with which this butterfly can be clearly distinguished from other species. Unlike Adonis Blues (Lysandra bellargus), the dark veins do not extend into white fringes of wing margins. The wingspan is 35mm. Host plant: Clover. Dutch name: Icarusblauwtje. Frisian name: Ikarusblaujurkje. 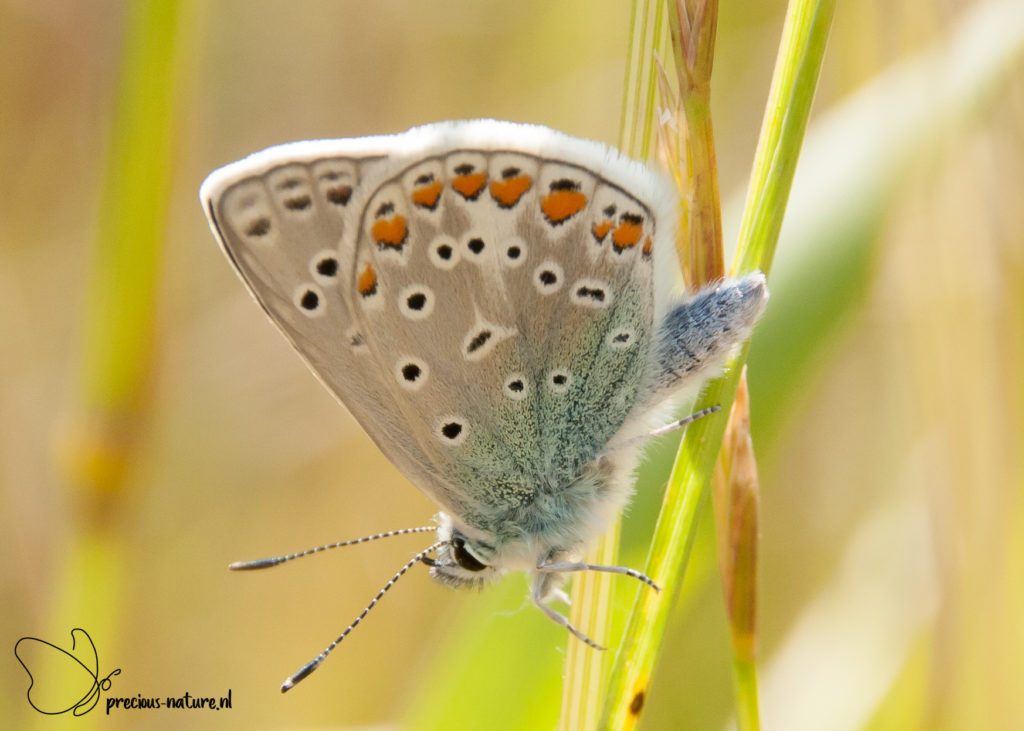 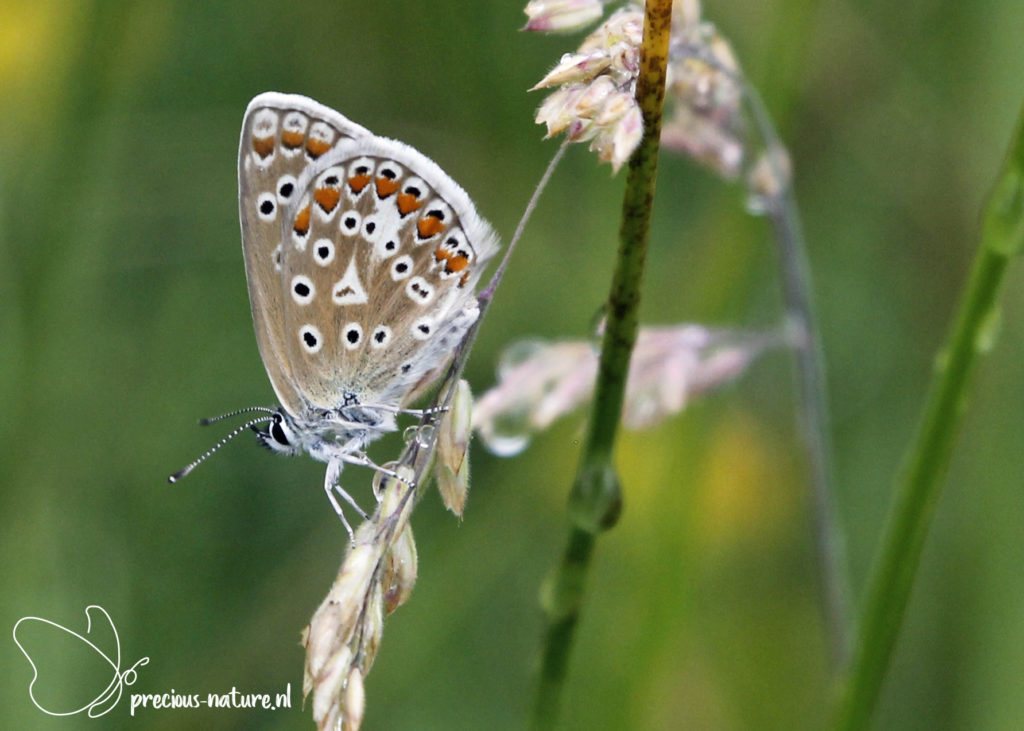 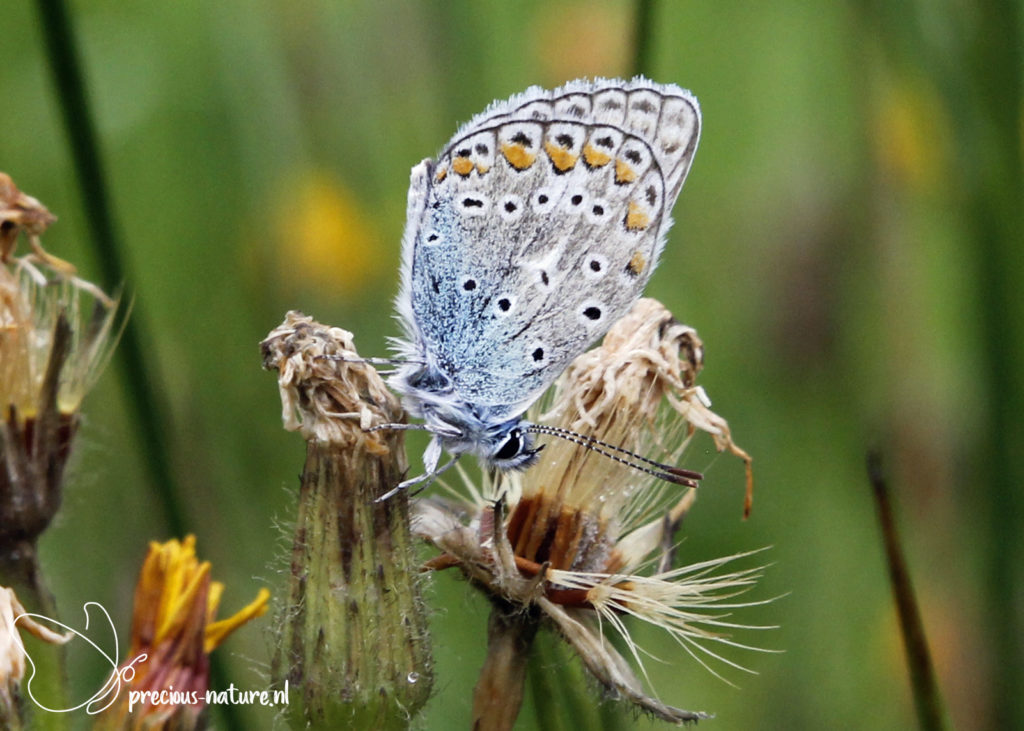 The Pale Grass Blue (Pseudozizeeria maha) is a small butterfly that I spotted in Japan and that does not occur in Europe. Very little is known about this butterfly which is related to the Dark Grass Blue and the African Grass Blue. Host plant: Wood Sorrel. Dutch name: Vale grasblauwtje. Frisian name: –