The Concealer Moths (Oecophoridae) keep their body in a resting position almost horizontal in most species. The wings of most species are kept in a fairly steep roof posture, but in some species they are nearly flat and overlapping. The forewings are elongated and the head is smooth, sometimes rough on the crown or with tufts of hair on the sides. The length of the antennas is about 20 to 75% of the length of the forewing. They are often held along the body, but in some species they protrude. The palps are often strongly curved upwards. Many species fly in the night and light up. A few species fly during the day.

The Gold-brown Tubic (Crassa unitella) has a golden brown forewing and orange-yellow head and palps. This concealer moth distinguishes itself from the similar Tinted Tubic (Crassa tinctella) because it stands high on its front legs in the resting position and the strongly contrasting orange-yellow color of the head compared to the brown wing and brown thorax. The wingspan is 12-16mm and the flight period is in one generation from June to early September. Host plant: fungi and under dead tree bark. English name: Golden-brown Tubic. Frisian name: – 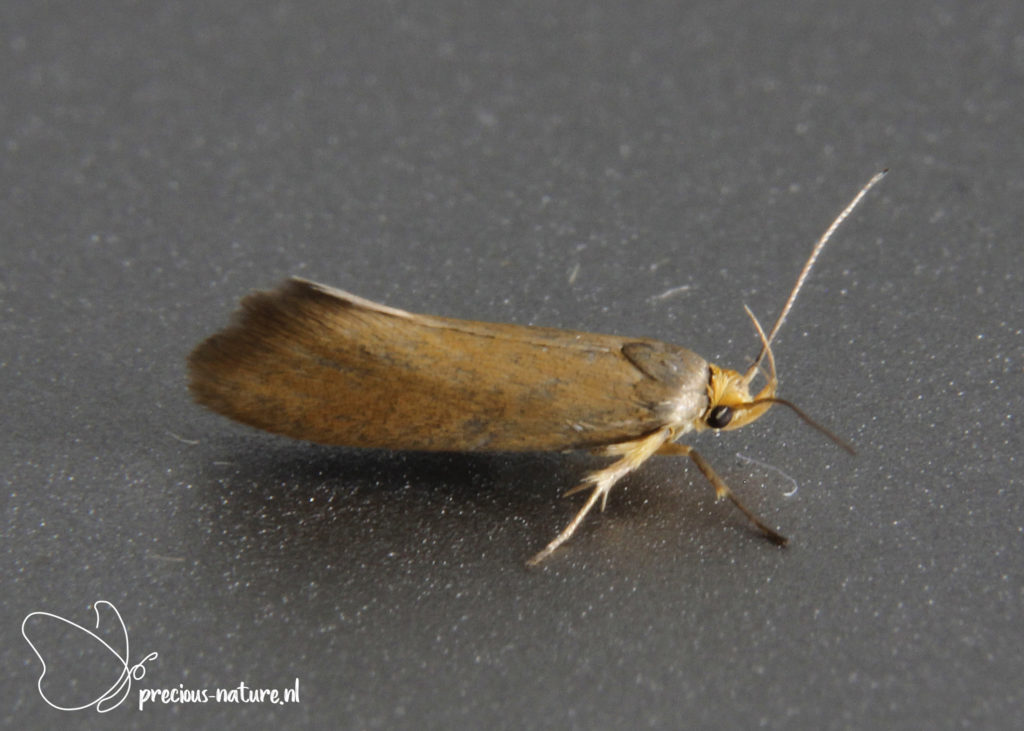 The head and thorax of the White-shouldered House-moth (Endrosis sarcitrella) are strikingly white. The forewing is white, coarsely dark grey-brown speckled, giving the wing a silvery appearance. An indistinct white spot can be seen on 3/4 of the costa and dark spots on a quarter, halfway, and 2/3. The flight period is in one generation from May to July and the wingspan is 15-21mm. Host plant: bark of dead trees. Dutch name: Witkopmot. Frisian name: – 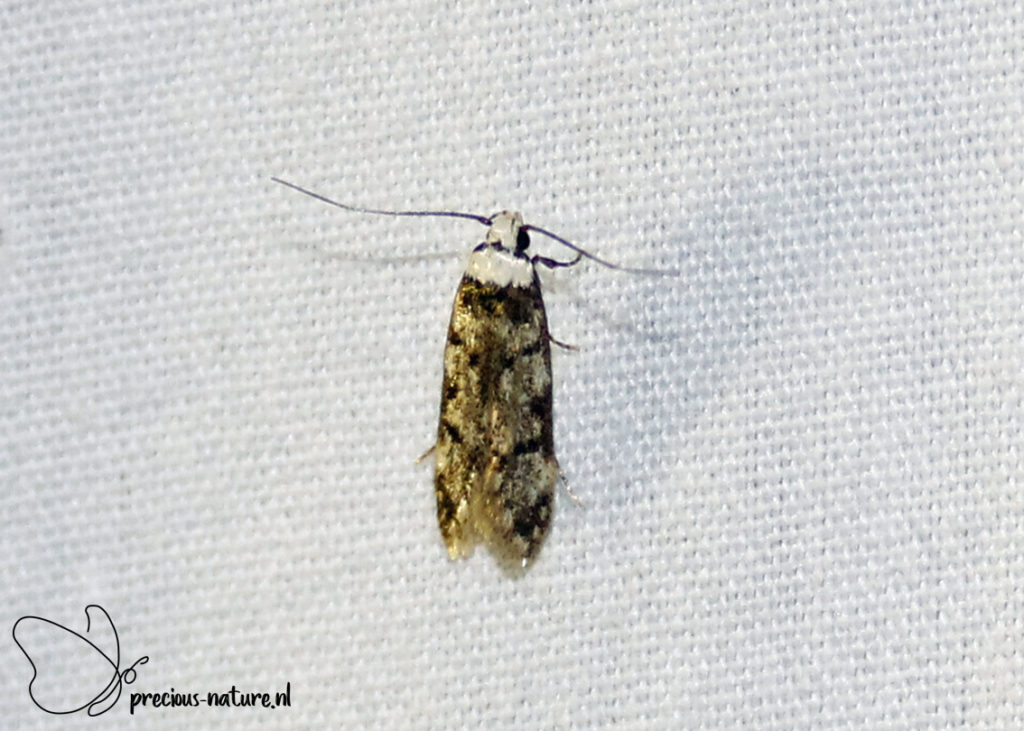 The Sulphur Tubic (Esperia sulphurella) is a striking concealer moth that is almost exclusively seen during the day. This is often during sunshine around rotting wood and along with bushes. The forewing is narrow, not pointed at the end but rounded and has a bluish glow and golden pollination. Two light spots are visible on the forewing, which are wider at the lower edge and bends inwards. The black antennas, with a white zone halfway, are highly developed and highly scaly. The palps are orange-yellow in color. The flying period in one generation is from April to July and the wingspan is 12-16mm. Host plant: Dead wood. Dutch name: Esperiamot. Frisian name: – 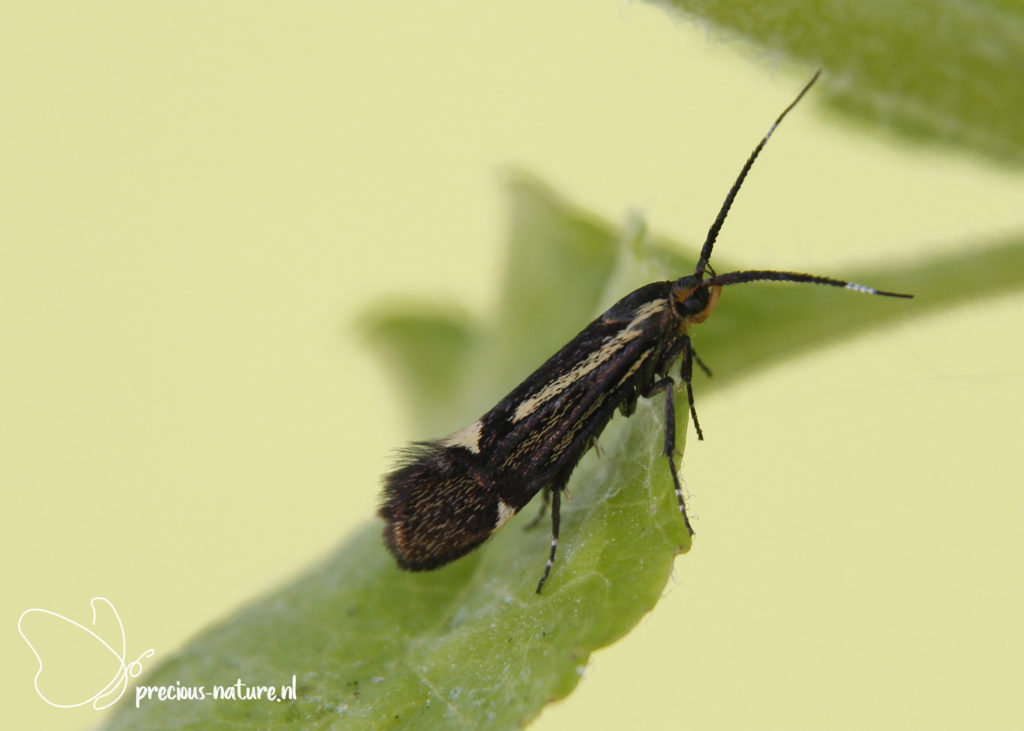 A concealer moth that lives up to its name is the Striped Tubic (Harpella forcifella). The caterpillar feels very good in old, sludge, wood. When identifying it, it was clear that it must be a concealer moth. The striking palps, which are bent backwards with their sharp points making it look like a rhino, were the cause of this. The brown haze covering the wings made it difficult to find the species. The wings of the Striped Tubic are brown and from the base a wide yellowish stripe, tapering slightly halfway and then wider again, running the length of the wing towards the termen. A small yellowish spot can also be seen near the apex. The flying period is from June to August and the wingspan is approximately 14mm. Host plant: Old wood and bark. Dutch name: Bruine molmboorder. Frisian name: – 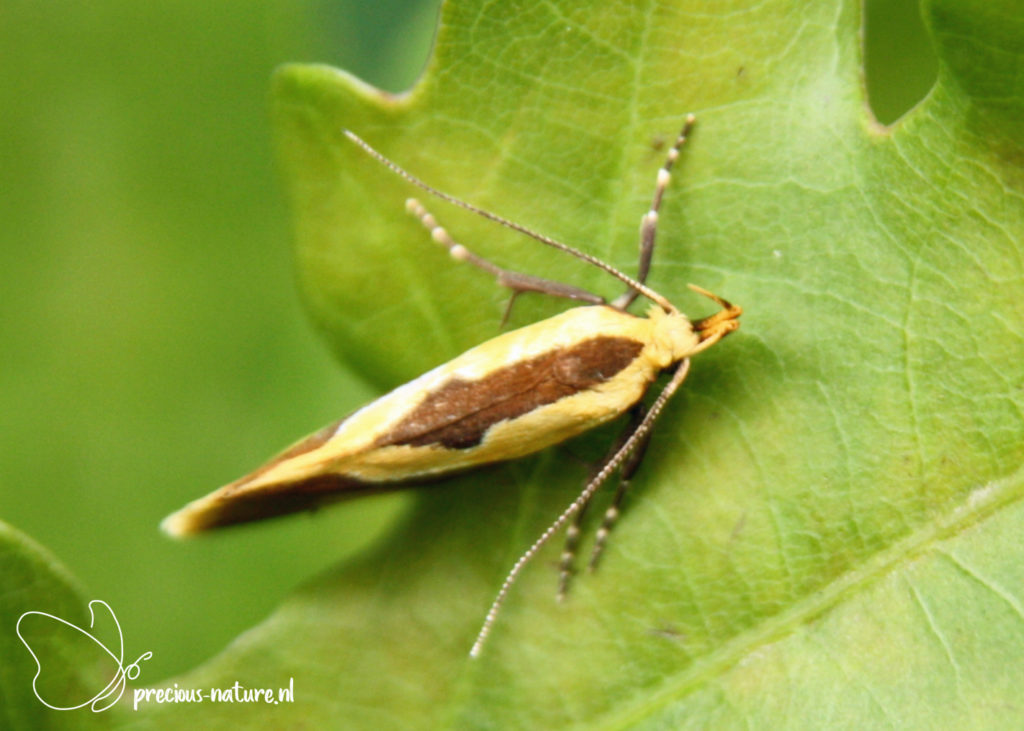 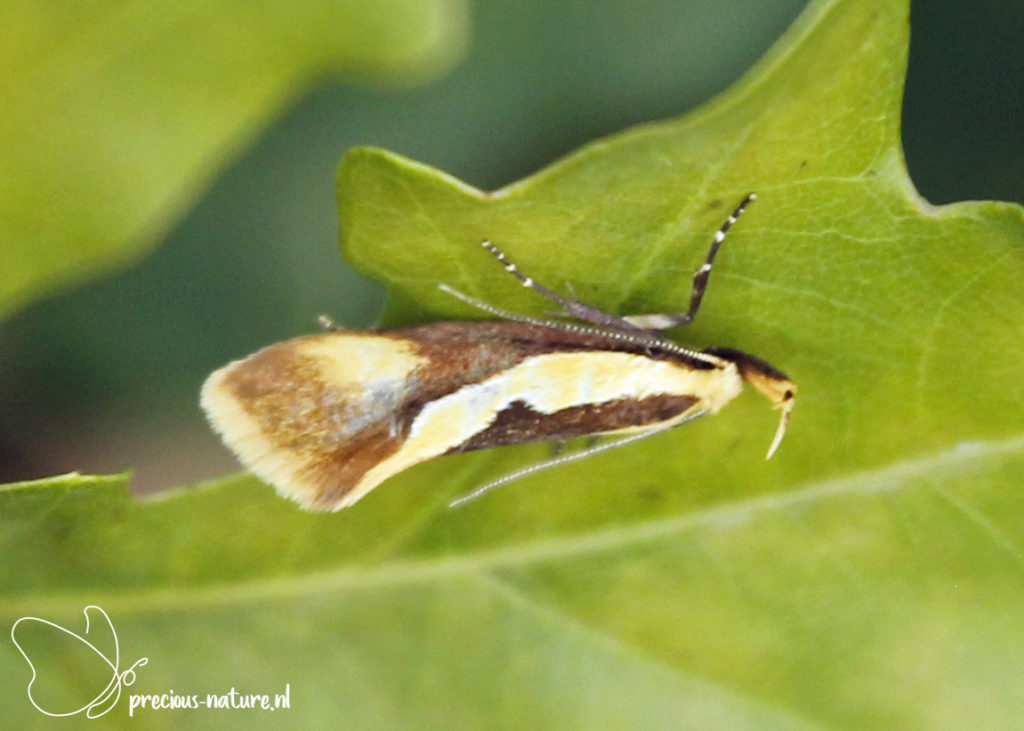 A common moth that mainly occurs in residential areas and can act as a pest indoors is the Brown House-moth (Hofmannophila pseudospretella). The forewing is pale brown with two dark spots or short stripes on a third and a more rounded spot on two-thirds of the wing. This moth flies in the late evening and is attracted to light easily. The flying period is in two generations for much of the year. The wingspan is 15-26mm. Host plant: Vegetable materials, paper, cardboard, animal feed, and flour. Dutch name: Bruine huismot. Frisian name: – 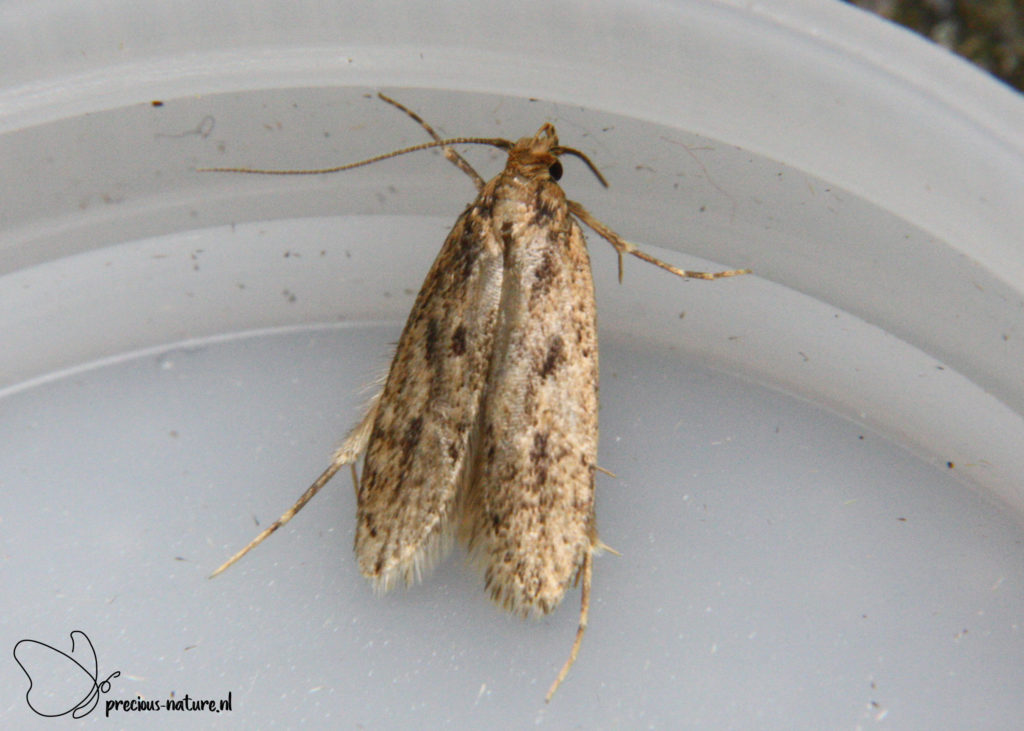 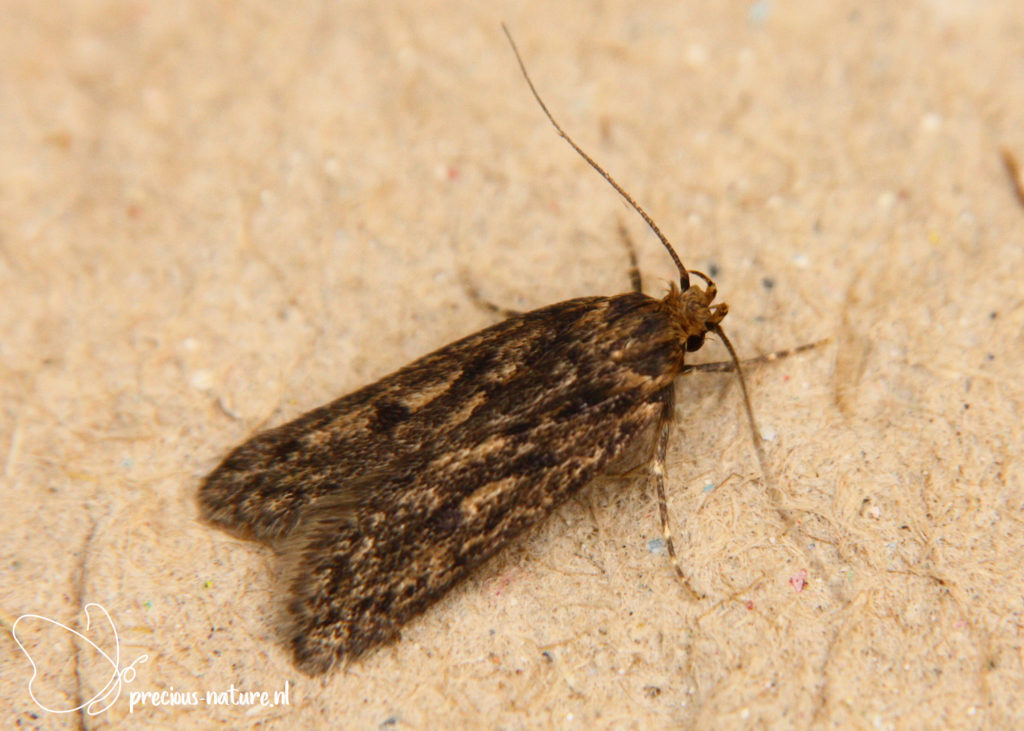 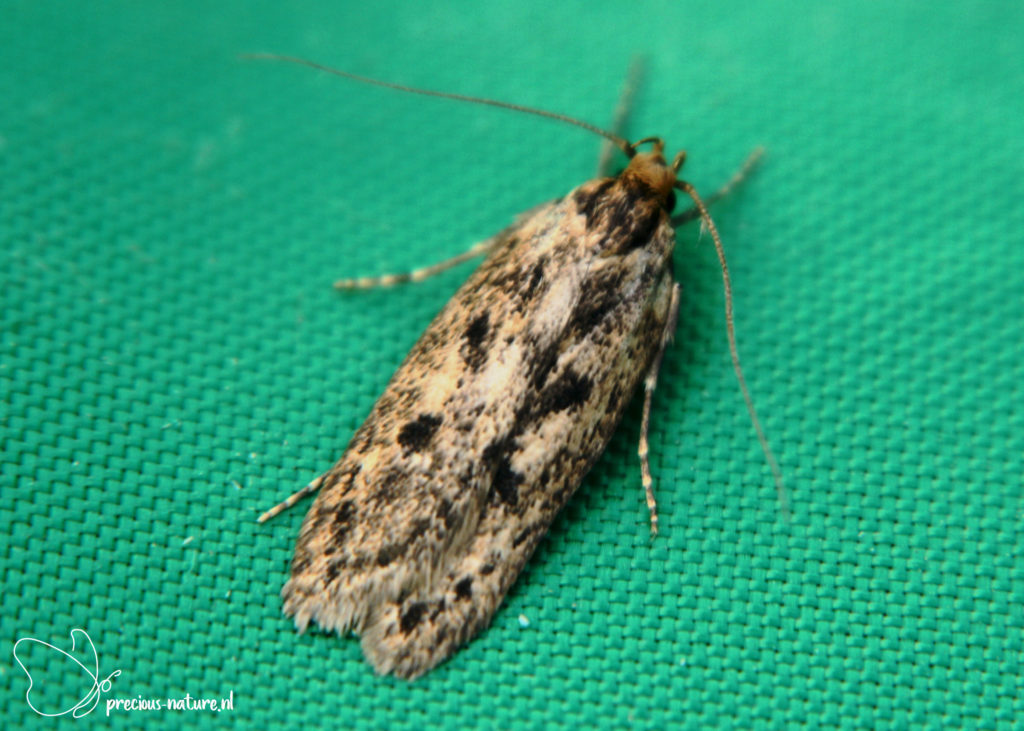 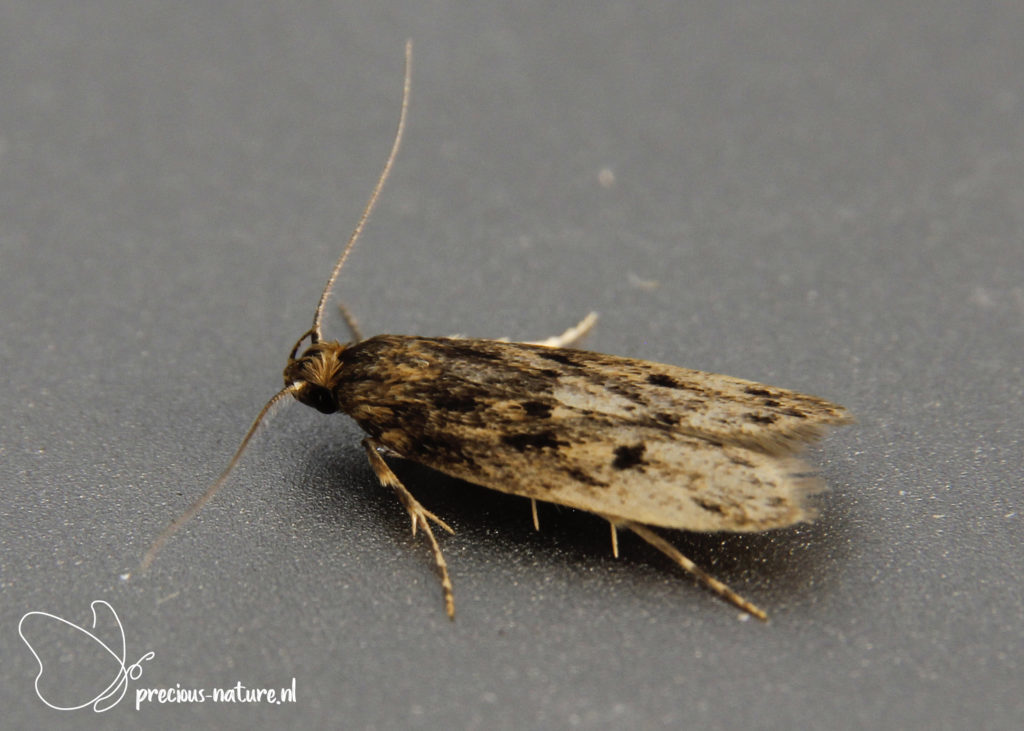 He resembles the species of the subfamilies Agriphila and Crambus of the grass moths, but the Light Streak (Pleurota bicostella) really belongs to the concealer moths. However, the palps of the Light Streak, which face forward, are longer. The forewing is whitish, variegated grey-brown, and has a broad white stripe along the costa reaching almost to the apex. A black dot or small stripe can be seen on 1/3 of the wing. The flight period is in one generation from June to July and the wingspan is about 24mm. Host plant: Cross-leaved Heath and Bell Heather. Dutch name: Gemsmot. Frisian name: – 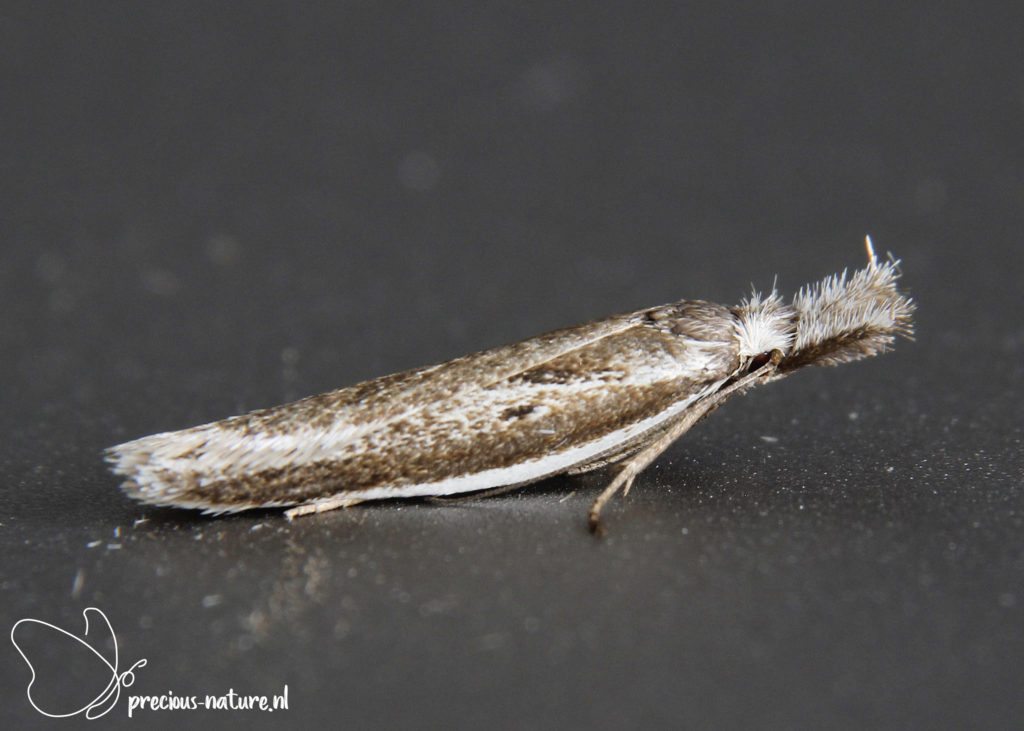