Hooktip Moths (Drepanidae) is a family of moths consisting of two subfamilies for which I spotted specimens, the Drepaninae and the Thyatirinae, which share the same type of hearing organ. The Drepaninae are the “real” Hooktip moths and have broad wings, a slender body, and almost all a hook-shaped wingtip. These moths are hidden between the leaves of their host plant and are usually only seen in light traps. They do not visit flowers but do come to honeydew or bleeding trees. The Thyatrinae, the False Owlet moths, were previously hosted in their own family, the Thyatiridae. They are very similar to owlet moths. Maybe that’s why the English name “false owlet moths”. They are slimmer and hold their wings at rest against their body. They often wear a striking crest on the chest piece.

When I saw the Chinese Character (Cilix glaucata) I didn’t realize it was a moth. Being in a resting position, with the wings held straight up, made it look like a bird dropping. There is a black spot along the dorsum of the white forewing with a smaller yellow spot next to it. In the mainly grey spot in the middle of the wing, there is a white drawing from which this moth derives its name from the English name. The wingspan is 20-26mm and the flight period is from April to September in two or three generations. Host plant: Blackthorn and Hawthorn. Dutch name: Witte eenstaart. Frisian name: Wyt iensturtsje. 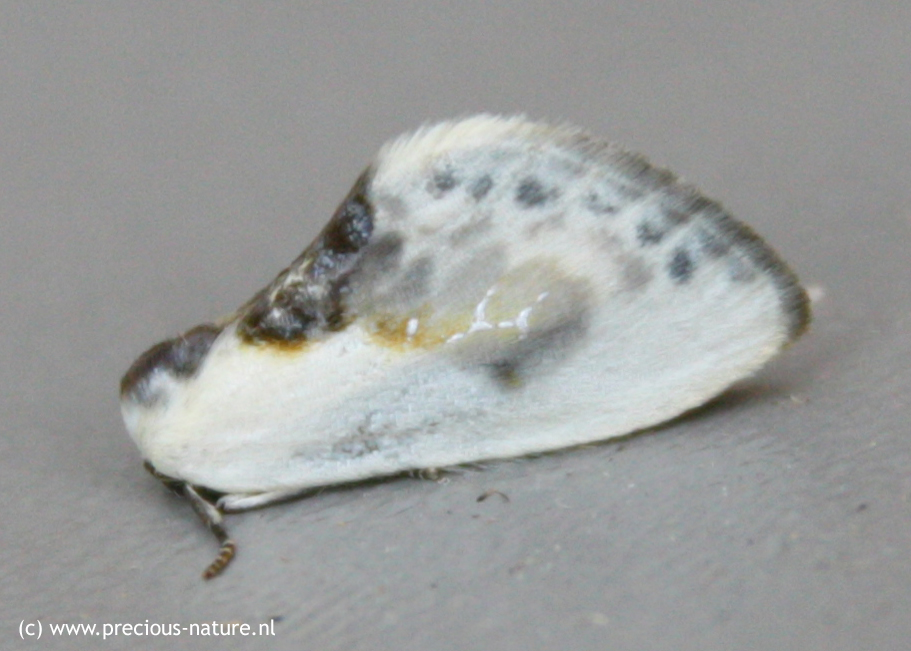 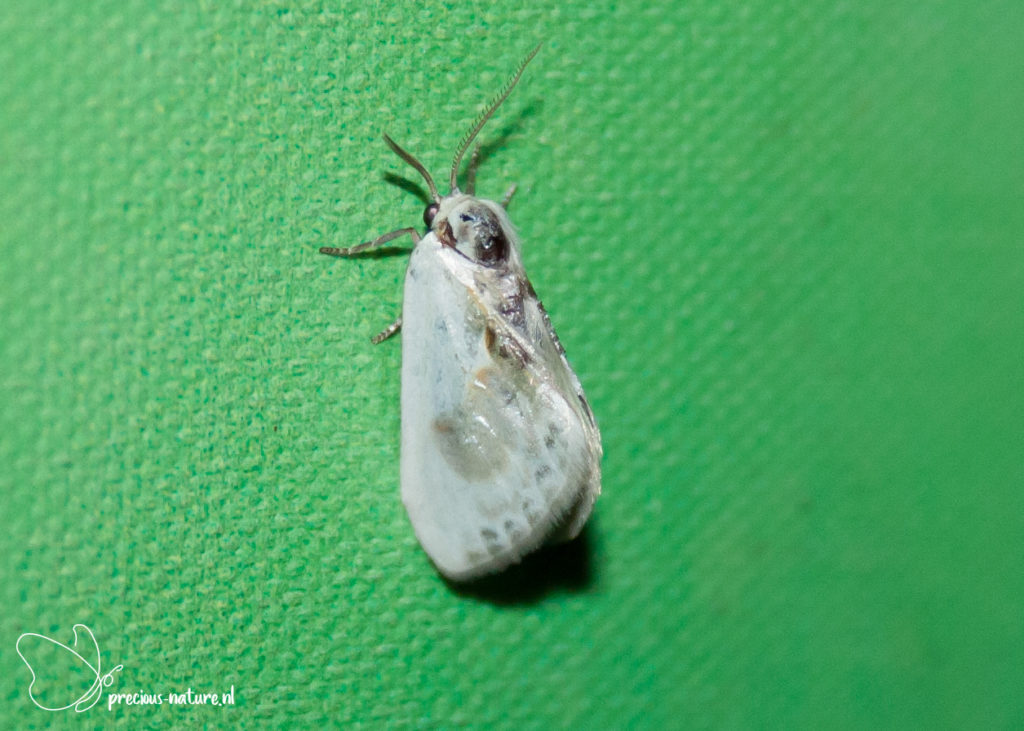 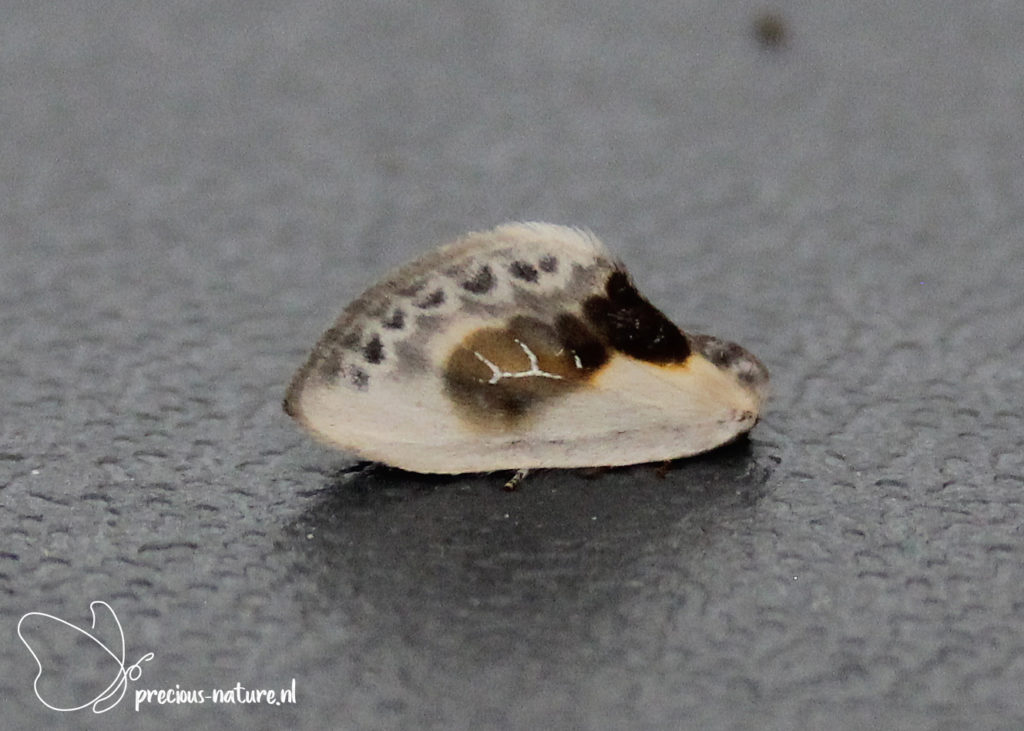 The Dusky Hook-tip (Drepana curvatula) has brown wings with dark and light purplish-pink bands that can vary widely in intensity and width. Fresh moths sometimes have a strong lilac shade. Striking is the dark, curved outer transverse line, which runs from the apex to the termen of the forewing and seems to continue on the hindwing, which distinguishes it from the similar Pebble Hook-tip (Drepana falcataria). The other transverse lines are wavy. On the forewing, there are usually two dots with a white core. On the hindwing, there is a relatively small dark spot with one or sometimes two smaller spots next to it. The flying period is from mid-April to the end of August in two generations and the wingspan is 32-42mm. Host plant: Alder and Birch. Dutch name: Bruine eenstaart. Frisian name: Brún puntsturtsje. 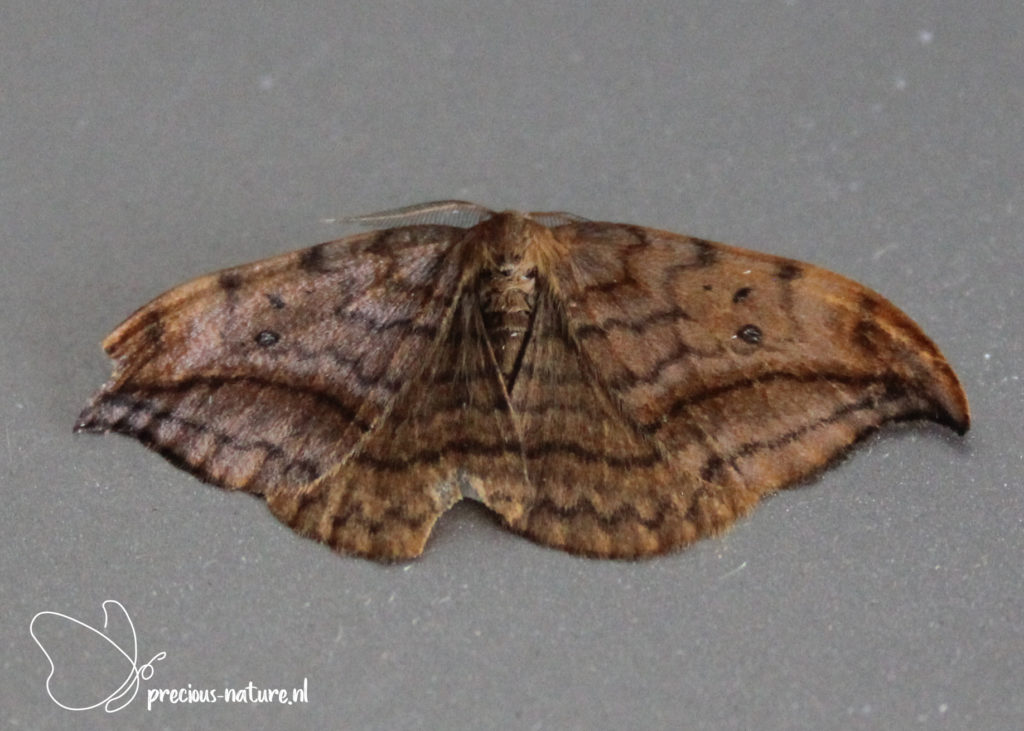 The Pebble Hook-tip (Drepana falcataria) is very similar to the Dusky Hook-tip (Drepana curvatula). The most characteristic feature of the Pebble Hook-tip is the relatively large dark median spot, which is much smaller in the Dusky Hook-tip, and the purplish-brown smudge along the dorsum just below the apex. Furthermore, the outer transverse line running obliquely to the apex is striking. The hindwing is usually lighter in color and there are many scalloped transverse lines on both the fore- and hindwing. The flying period is from mid-April to the end of August in two generations and the wingspan is 34-42mm. Host plant: Birch and Alder. Dutch name: Berkeneenstaart. Frisian name: Bjirkepuntsturtsje. 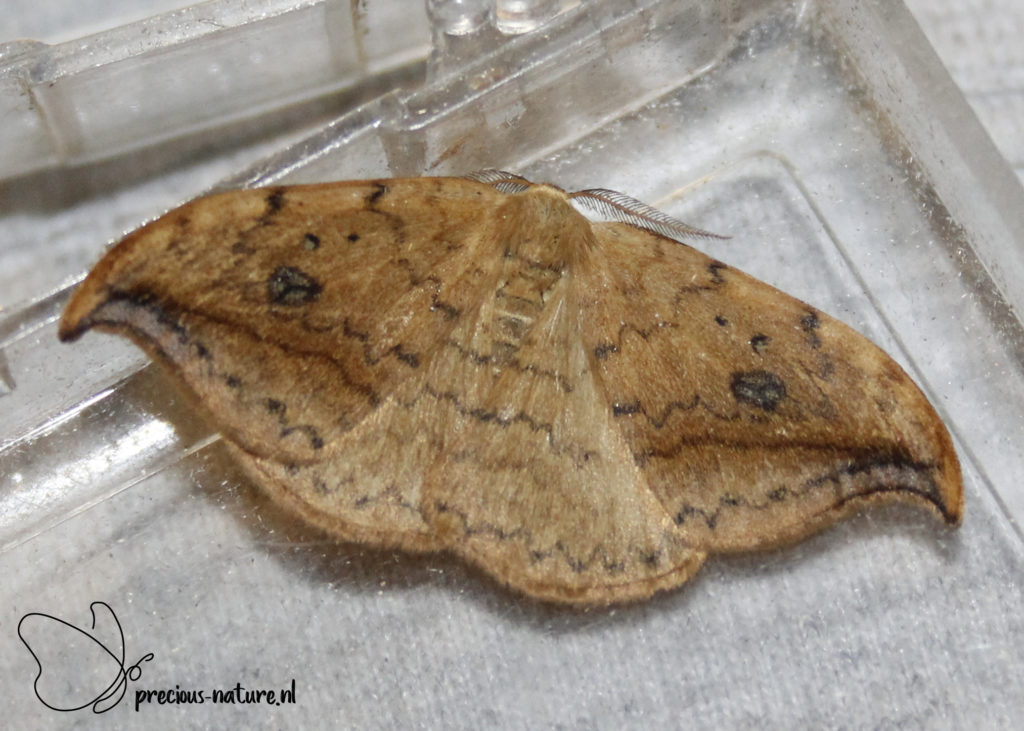 The ground color of the Oak Hook-tip (Watsonalla binaria) which, like other species of this subfamily, rests with flat outspread wings, is orange-yellow. Freshly hatched specimens often have a purple glow over the wings. Two lighter transverse lines run across the forewing, creating a median band in which two distinct black dots can be seen, a larger and a smaller spot. There are also two black dots on the hindwing and the outer zone is much lighter in color than the rest of the wing. The male is often darker and browner than the female, which in turn is generally larger. The flight period is from late April to early September in two generations and the wingspan is 18-30mm. Host plant: Oak. Dutch name: Gele eenstaart. Frisian name: Giel puntsturtsje. 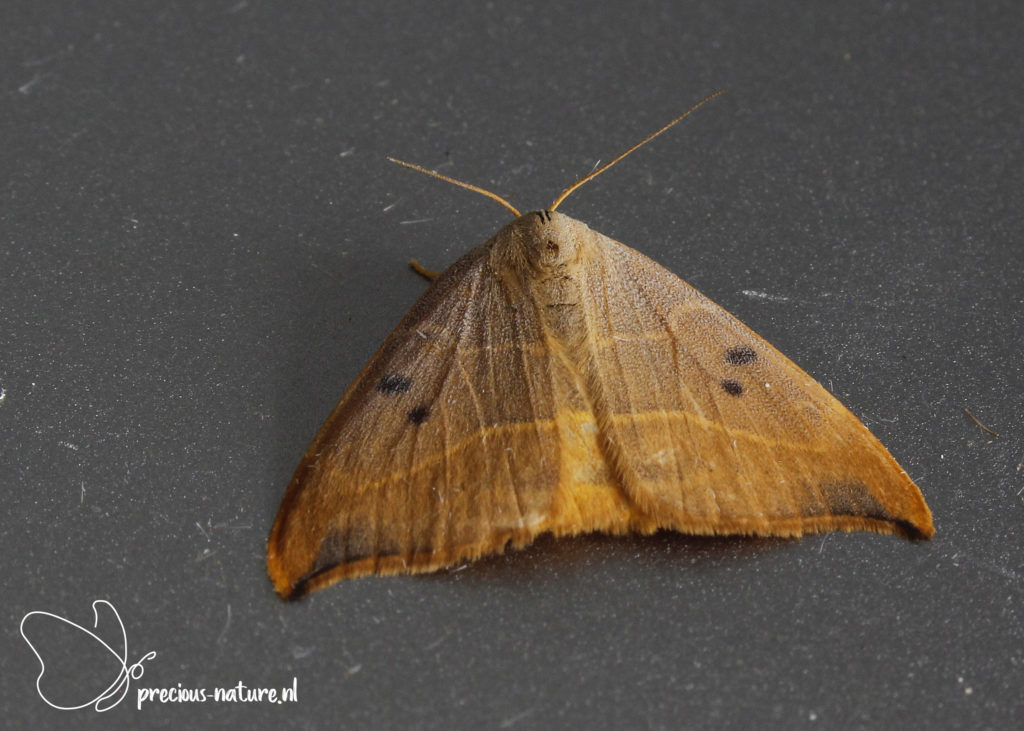 A beautifully marked moth is the Buff Arches (Habrosyne pyritoides). As soon as he is in the resting position, it looks as if you see a flint with the well-known fracture surfaces. On those ‘fracture surfaces’, you see a white and orange-brown zigzag pattern. A white zone can be seen just along the costa of the forewing. At the border of this white zone, two dark brown white-rimmed spots can be seen, the largest of which has a white core. The wingspan is 34-40mm and the flight period is from August to November in one generation. Host plant: Blackberry and Raspberry. Dutch name: Vuursteenvlinder. Frisian name: Fjoerstienflinter. 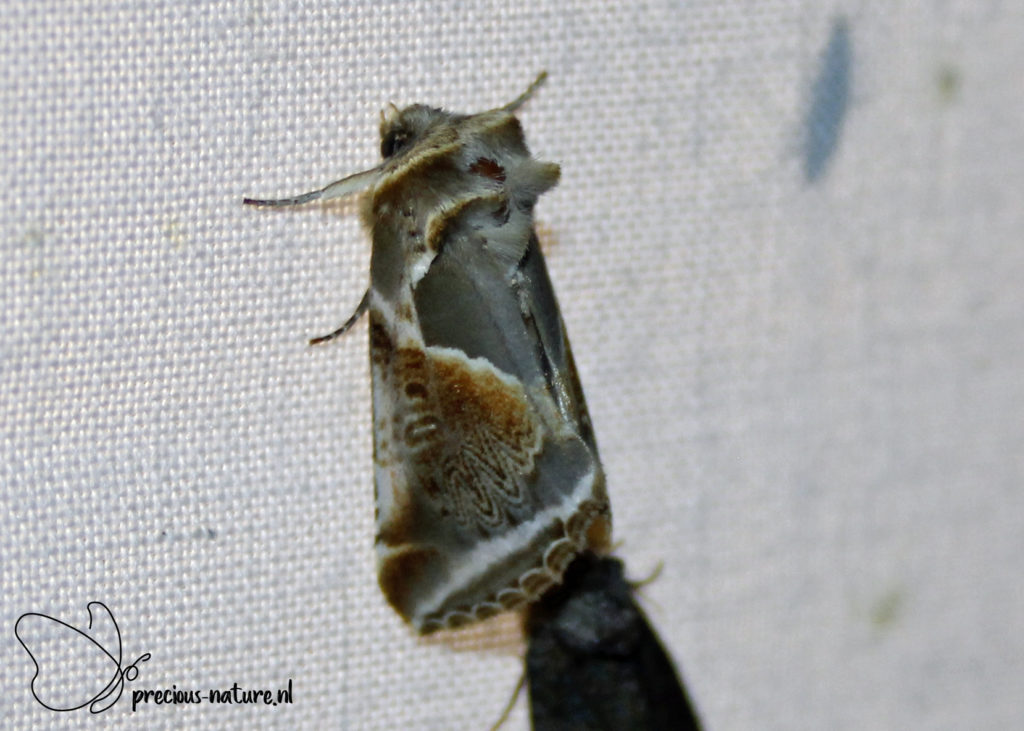 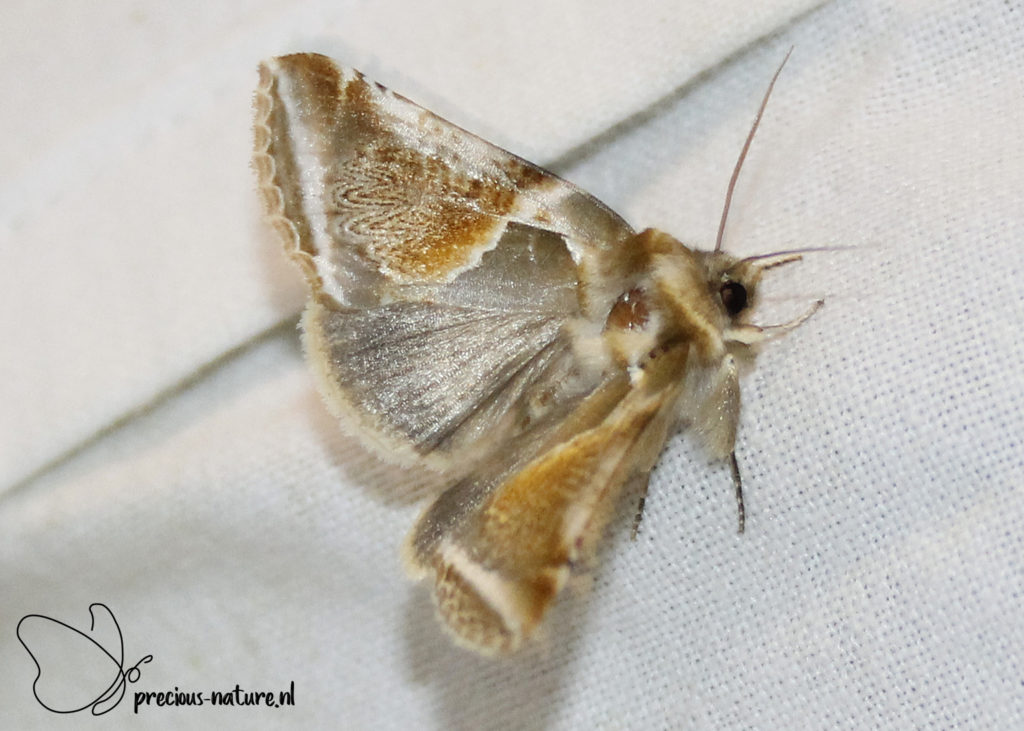 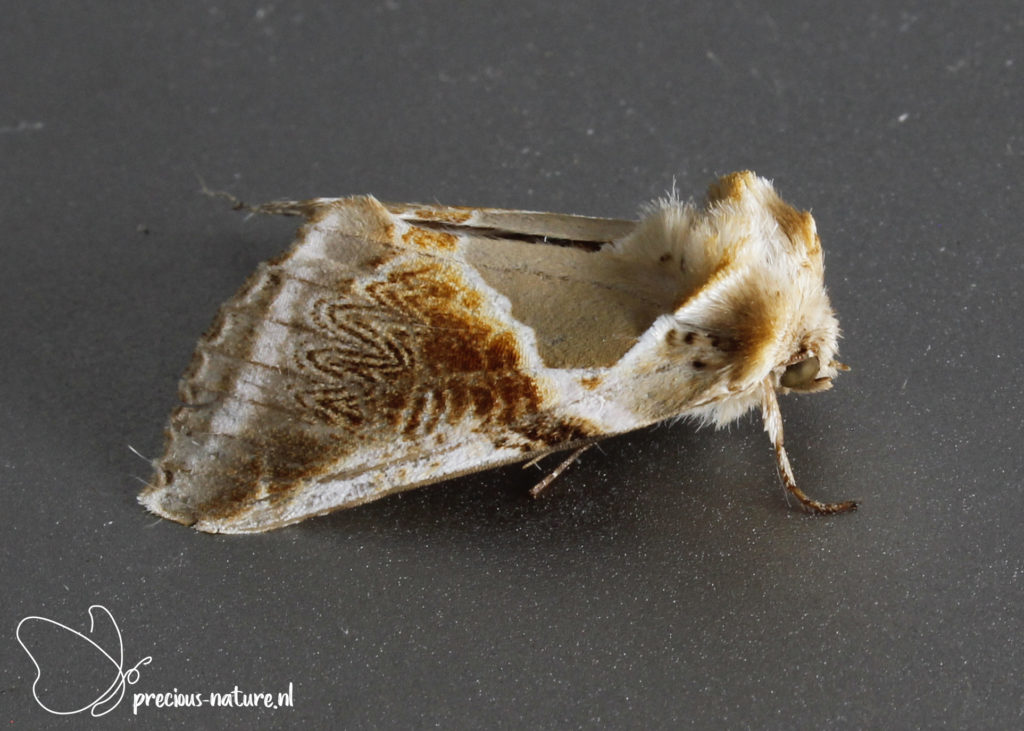 A moth belonging to the hooktip moths and a very worthwhile moth, the Figure of Eighty (Tethea ocularis). I was very excited when I got this moth on the canvas. The moth has a cylindrical shape when resting, placing its wings curled close to its body. Besides the hue and drawing of brown and white tones, the white ’80’ on the forewing is most noticeable. The double thin black transverse lines on either side both curve, as it were, around this marking. The color of the forewing varies from light to dark brown and often has a purplish sheen. The wideband where the ’80’ is located is very light brown. The hindwing is light brown-yellow with a slightly dark zone on the termen. The wingspan is 32-40mm and the flight period is in one generation from May to August. Host plant: Aspen and other poplars. Dutch name: Peppel-orvlinder. Frisian name: Peppel orflinter. 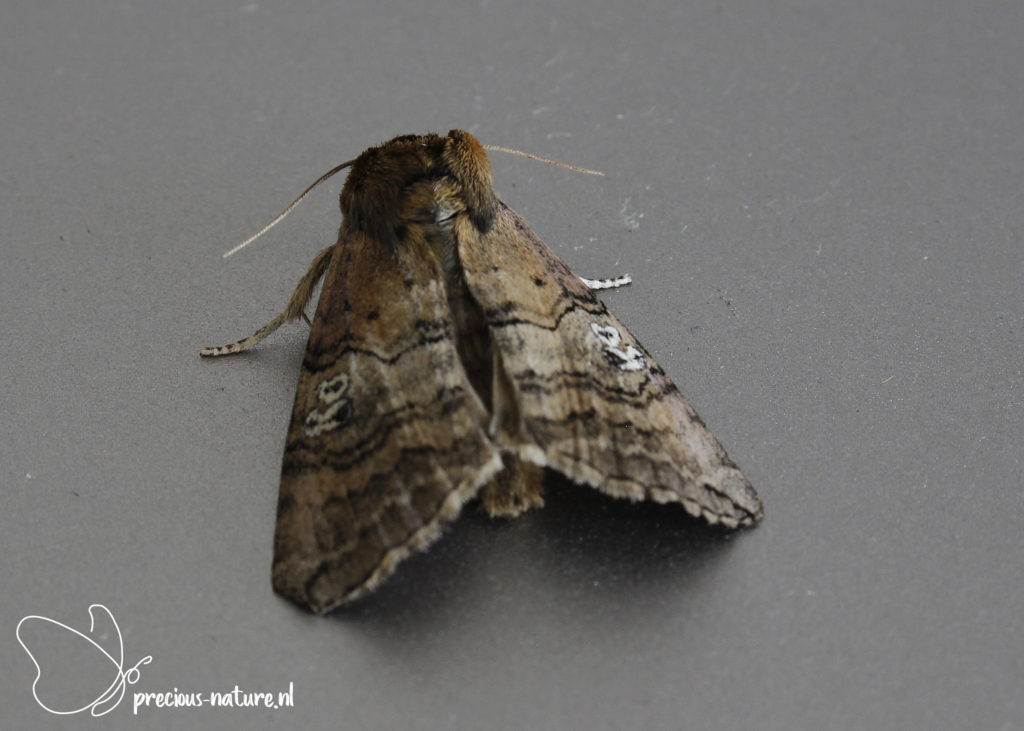 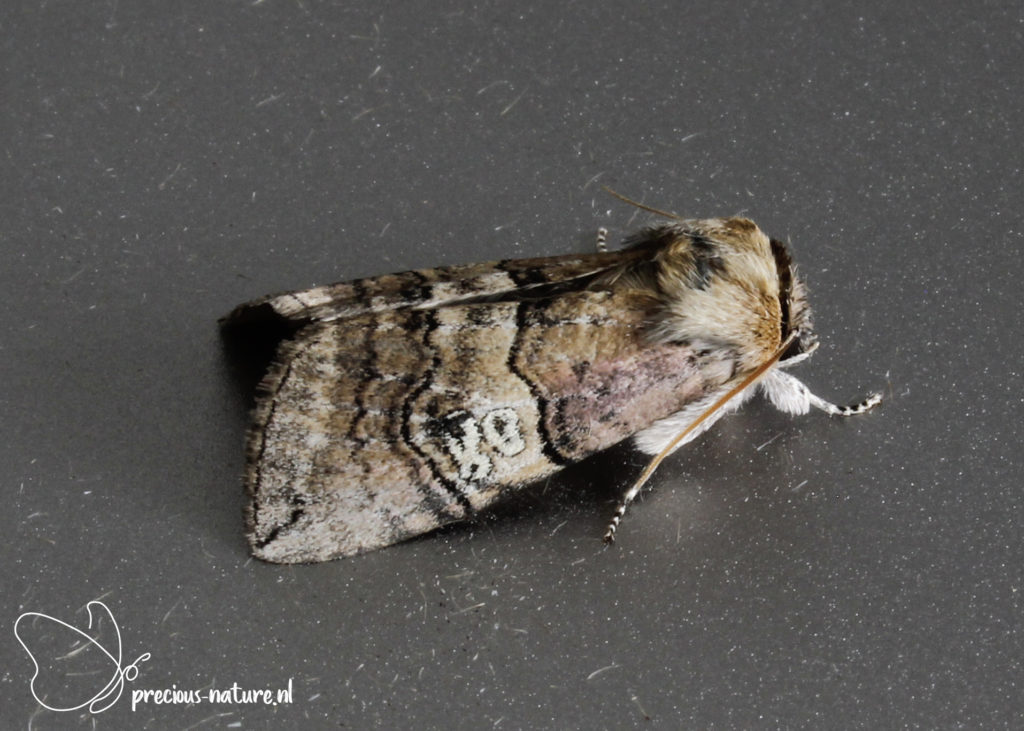 A striking appearance is the Peach-blossom (Thyatira batis). The forewing is brown and shows several striking white-pink flower-like spots. At the apex are two of those spots, one on the corner of the dorsum and inner edge and one in the base field. The wingspan is 32-38mm and the flight period is from April to early September in two generations. Host plant: Blackberry, Bramble, and Raspberry. Dutch name: Braamvlinder. Frisian name: Toarnbeiflinter. 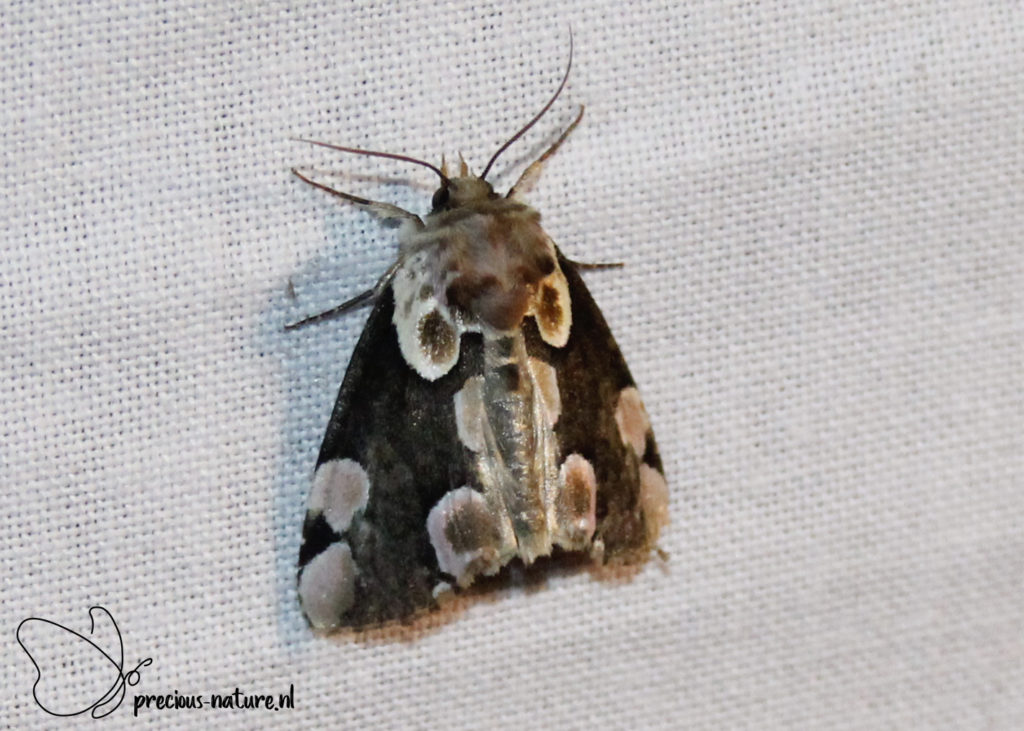 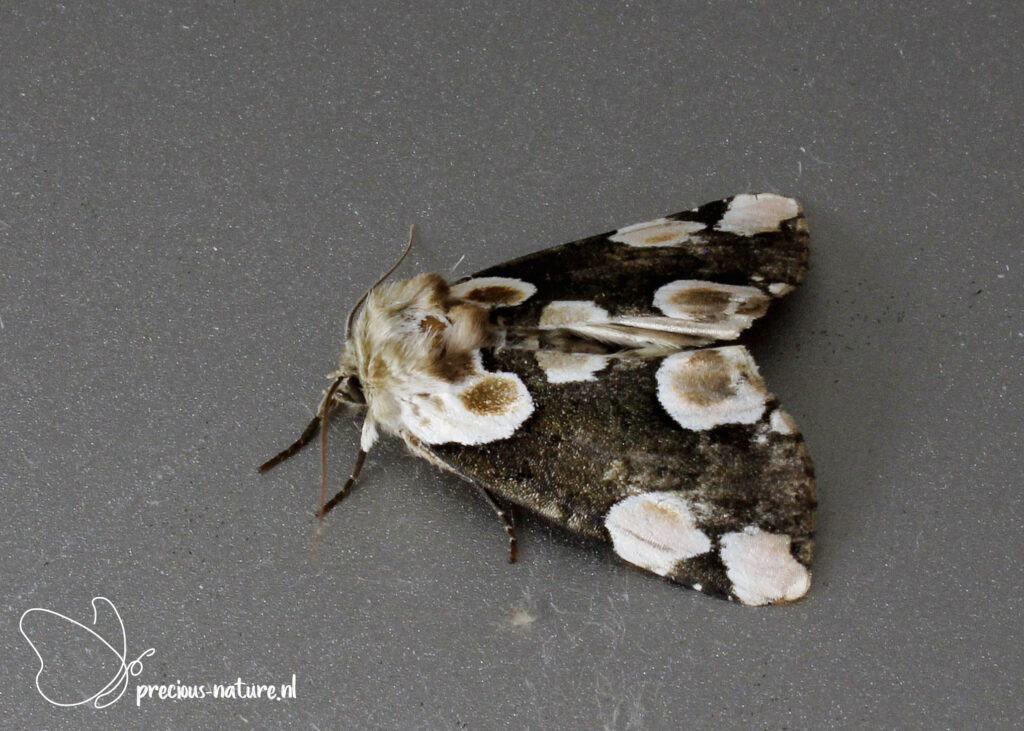 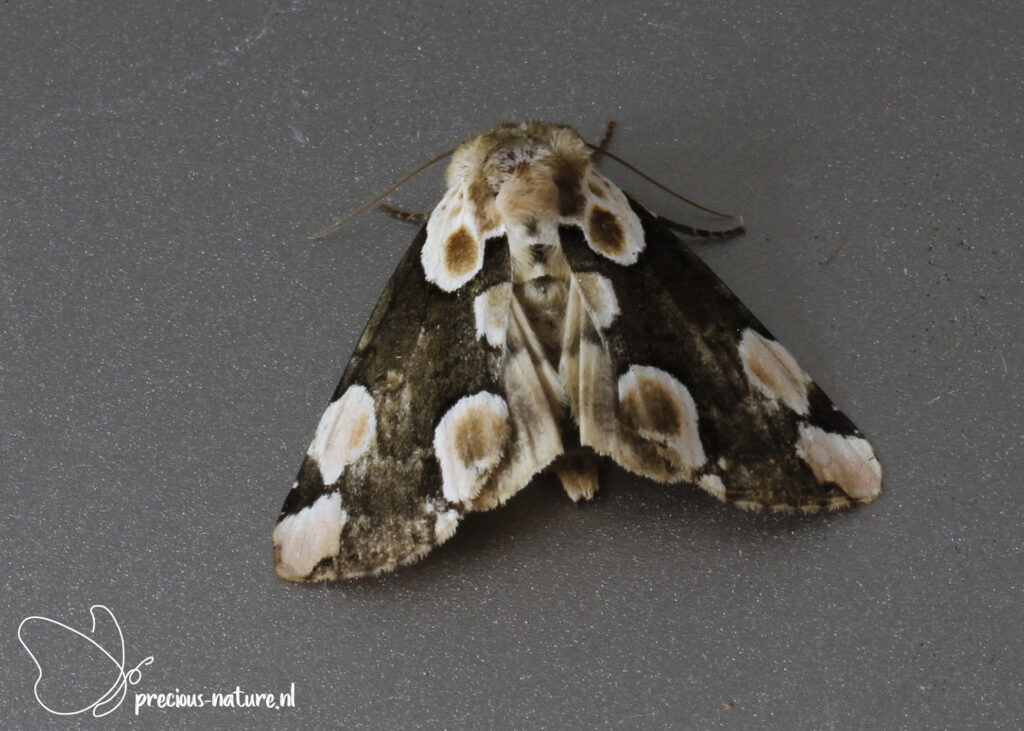