The medium to large fritillaries, the Longwings (Heliconiinae), range in size from 60-100mm and are protected by bitter body fluids. This makes them inedible for predators. The predators are warned by the beautiful color patterns, which are often combinations of black with red, orange, yellow, and blue. Due to the enormous variability that can occur within a species, these butterflies are sometimes difficult to identify. The Longwings are a subfamily of the Brush-footed Butterflies (Nymphalidae).

Sometimes it takes a while to find a Dutch name when you discover butterflies abroad. This also applies to the Lacewing Butterfly (Cethosia hypsea) that I discovered in Bali. This butterfly is bright orange-red above with broad black margins. With this bright orange, they warn predators that they are poisonous. The wings are scalloped, giving the hindwings an almost sawtooth-like appearance. The undersides are orange-red with white bands and are mottled with black forming an intricate pattern. Females and males can be distinguished by the wing color pattern on the dorsal (top) side. The dorsal side of the male has a black base color pattern with white spots and bright orange while females have a black base color pattern, with white and red spots. From the ventral direction, both males and females have the same color pattern with a combination of bright brown, white, red-orange, and black spots. In the ventral part, the V-shaped pattern on the edge of the wing also looks very clear with the pattern of black and white scales. In addition to the color pattern, males and females can be distinguished by the wingspan, males are smaller than females. The wingspan is 60-80mm. Host plant: Prickly Lantana and Snakeweed. Dutch name: Luipaardvlinder. Frisian name: – 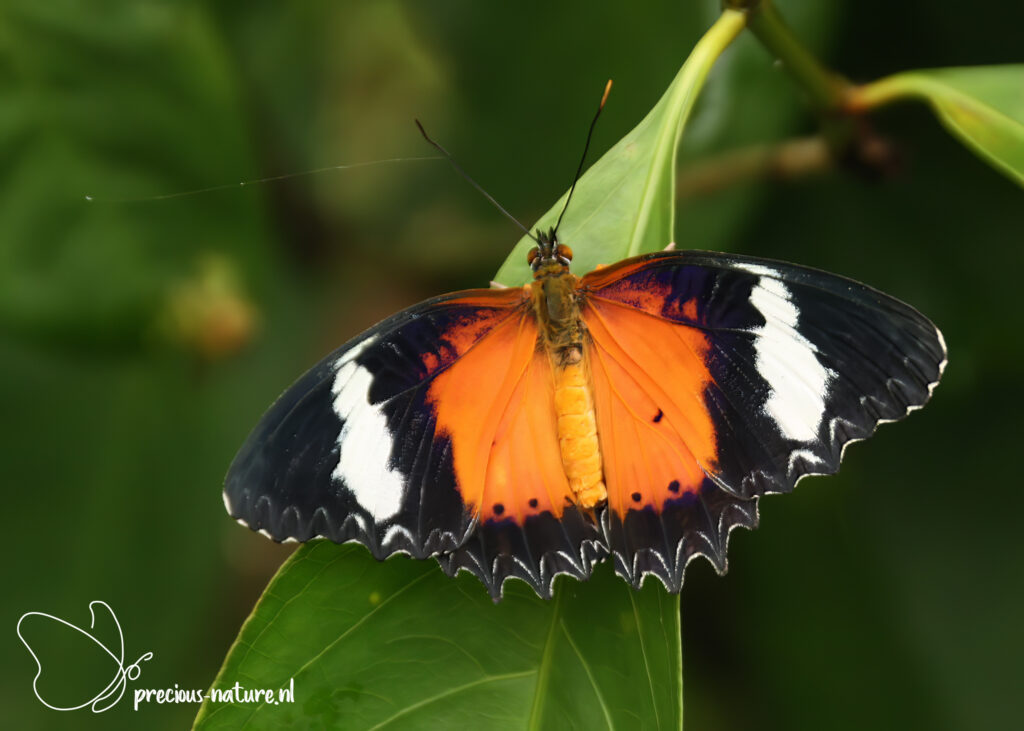 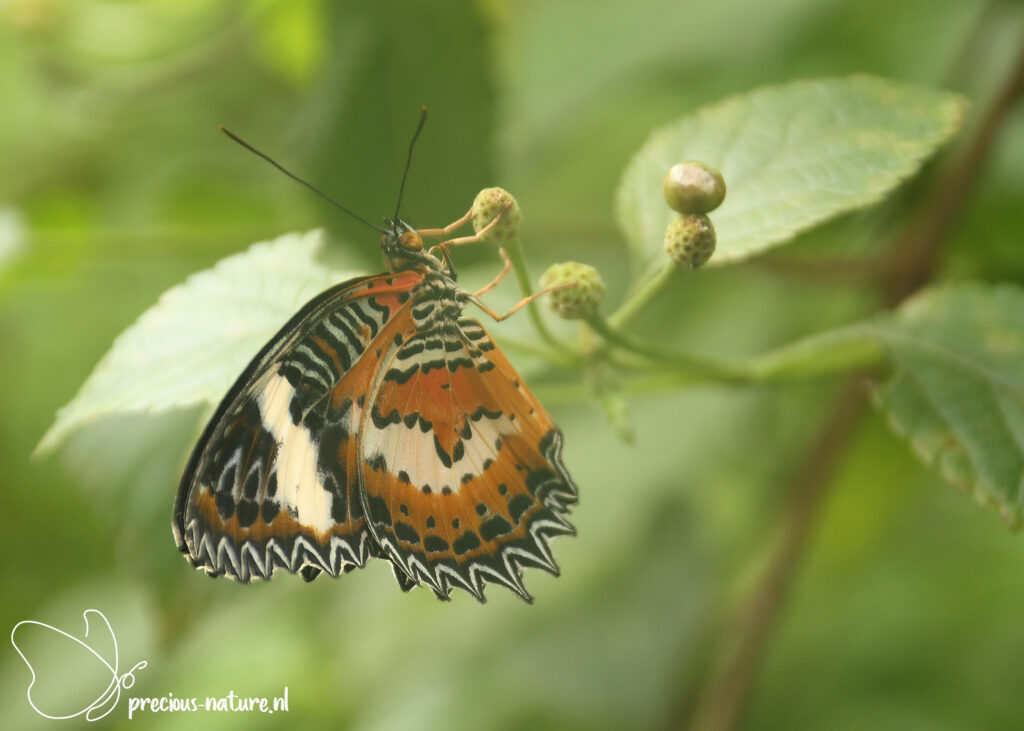 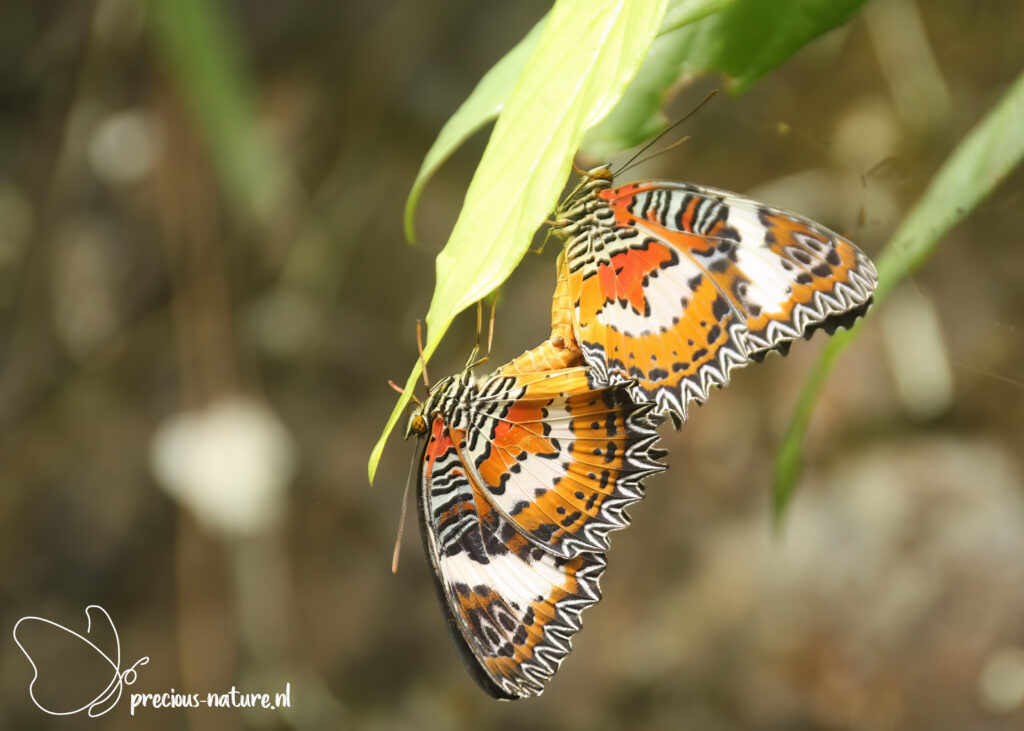 The Silver-washed fritillary (Argynnis paphia) has disappeared from the Netherlands as a butterfly since 1980. Occasionally he was still found as a migrant from France where I found this fritillary. The Silver-washed Fritillary was found in Limburg (Netherlands) in 2005 and after 10 years this butterfly may be appointed as a resident butterfly again. The male is best recognized. The top of the orange forewing shows three distinct black scent stripes. Furthermore, the top is covered with a black spot pattern. The underside of the forewing is orange-yellow and the hindwing greenish with silvery stripes that are widest in the female. The wingspan is 72-76mm and the flight period is from June to September in one generation. Host plant: Common Dog-violet, and Thistle. Dutch name: Keizersmantel. Frisian name: Keizersmantel. 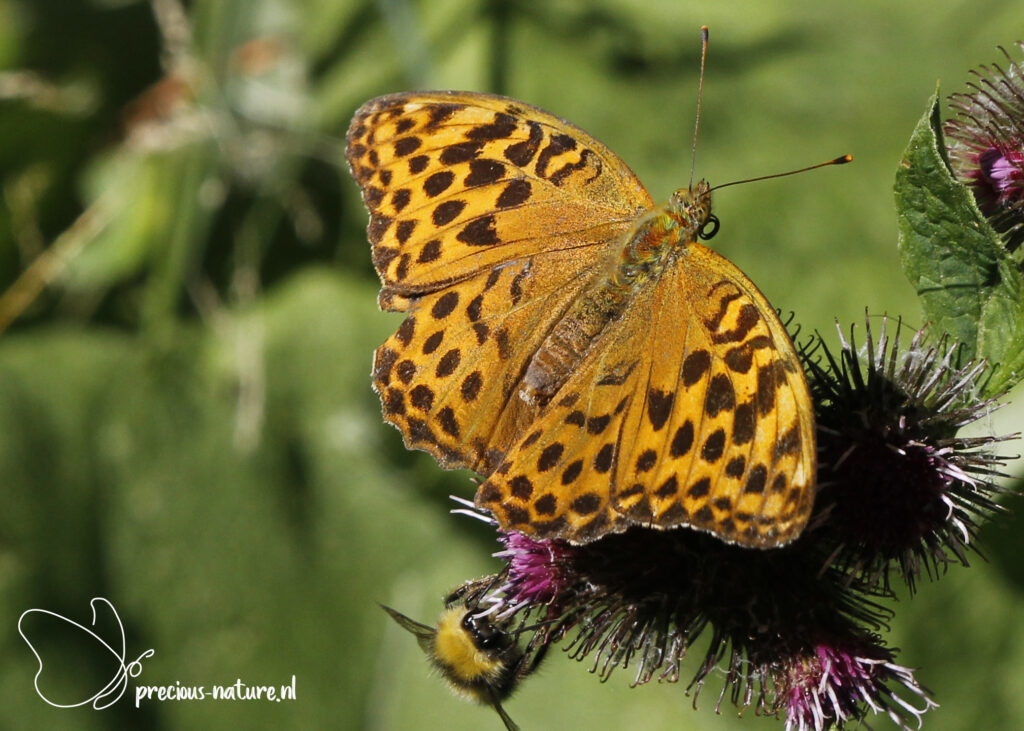 The Small Pearl-bordered Fritillary (Boloria selene) is rare in the Netherlands and an endangered species. It still occurs in peat areas in the North. The adults fly close to the ground, stopping frequently to take nectar from flowers such as Bramble and thistles. The top of the wings are orange with a row of black dots near the costa and larger spots spread over the rest of the wing. The termen has lighter orange to white spots with a black V-shape inward. The bottom is covered with light cells, some of which are white. A number of cells form a crescent moon with some imagination. The black dot in the orange central cell on the underside of the hindwing is the hallmark that best describes the Silver-meadow Fritillary. The wingspan is 41-44mm and the flight period is from May to September in one or two generations. Host plant: Common Dog-violet, and Marsh Violet. Dutch name: Zilveren maan. Frisian name: Sulveren moanne. 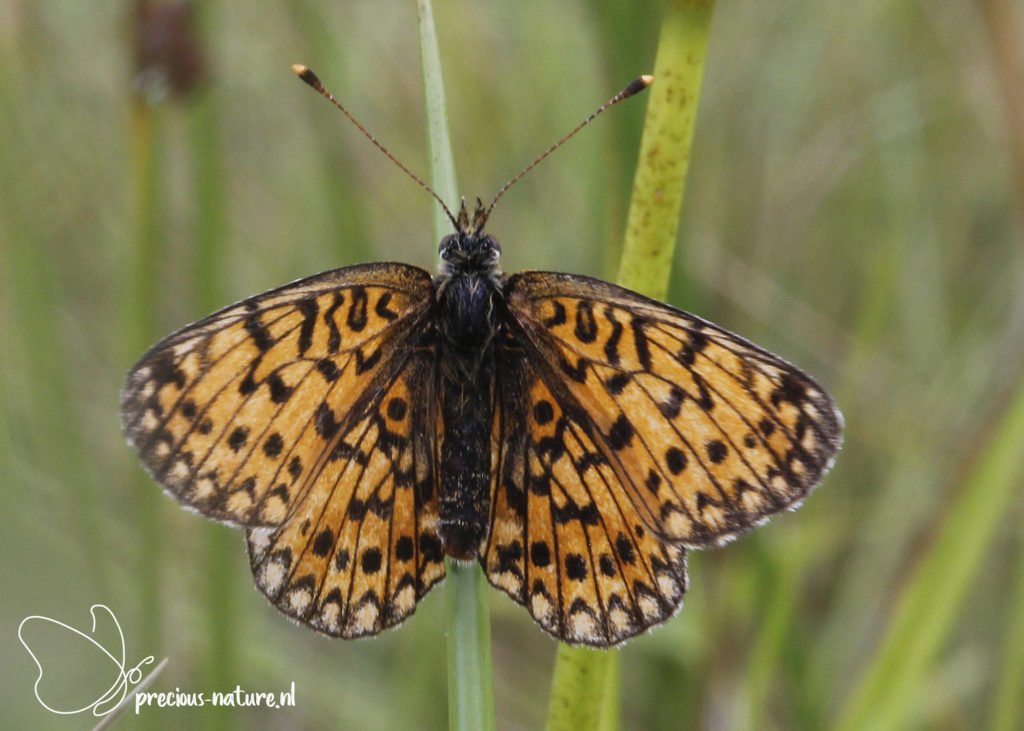 During my walk in the Irsental in the Eifel area I saw that one of the fluttering fritillaries was different from the one I had seen until then. It took a while before the Marbled Fritillary (Brenthis daphne) sat down so that I could get a good picture of it. To determine the right species you really need the top and bottom of the wings. The top of the wings are orange with a black spot and dot pattern. The black spots along the rear edge of the hind wing are conspicuous and almost detached from each other. This distinguishes the Marbled Fritillary from the similar Lesser Marbled Fritillary (Brenthis ino) where they are fused together to form a black border. Another difference is the center cell on the underside of the rear wing. In the Marbled Fritillary, it is two-colored, while in the Lesser Marbled Fritillary it is only light yellow. The flight period is in one generation from the beginning of June to the end of July and the wingspan is 30-44mm. Host plant: Blackberry and Raspberry. Dutch name: Braamparelmoervlinder. Frisian name: Toarnbeiparlemoerflinter. 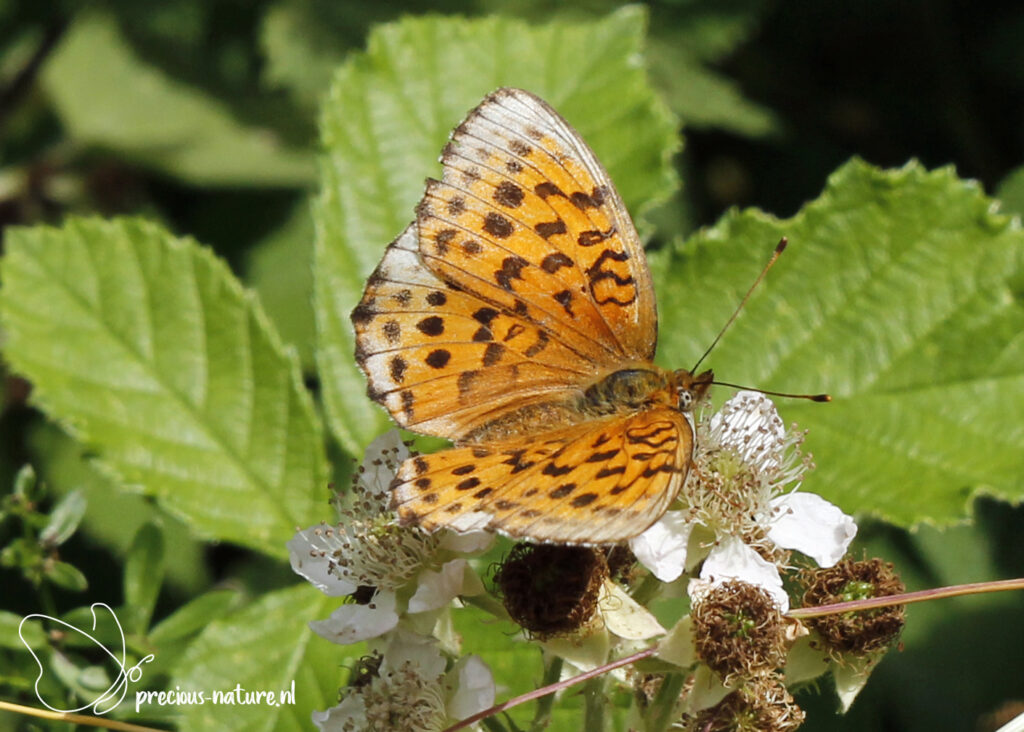 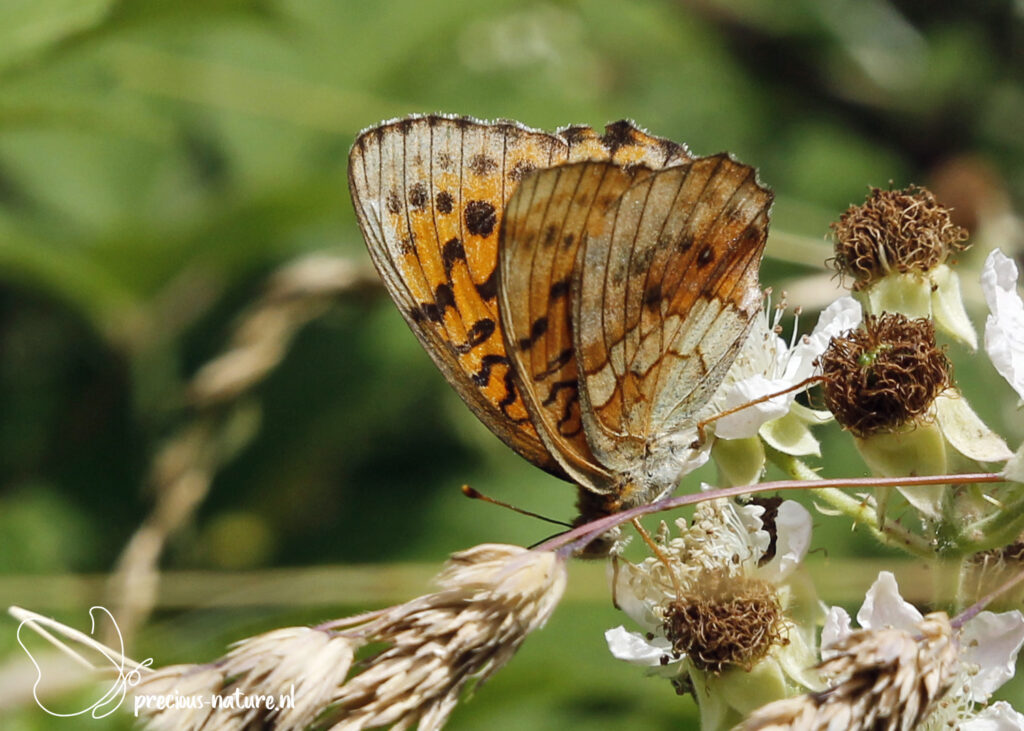 In general, I have to wander south to see fritillaries. For example, I came across the Queen of Spain Fritillary (Issoria lathonia) in the Eifel region in Germany, while in the Netherlands you encounter this butterfly more in the coastal regions. It took me a while to get the right photos of the moving specimen to properly identify it. The top of the front- and rear wings are orange with many black dots with the forewing showing a hollow along the trailing edge. Along the leading edge of the forewing, the black spots are more elongated. On the rear wing, you basically see two rows of black dots along the edge of the wing and a third a little more inward. On the underside of the rear wing large white oval spots can be seen with a dark zone near the rear edge with white eye spots that are outlined in black. The flight period is in three or four generations from the beginning of April to the end of October and the wingspan is 38-45mm. Host plant: Field Pansy and Wild Pansy. Dutch name: Kleine parelmoervlinder. Frisian name: Lytse parlemoerflinter.