Fairy Moths (Adelidae) are known for their very long antennas. These are often 2.5 to 3 times the length of their forewings. They are often longer in the male than in the female. The species that fly during the day are brightly colored while the nocturnal butterflies are dull colored.

In the Green Long-horn (Adela reaumurella), the male, like the other fairy moths, has much longer antennas than the female. In the male the antenna is about three times the length of the forewing and in the female one and a half times. The male also has fairly long dark black hair on the head and thorax. The female has much shorter hair and two stripes of orange tufts between the eyes. The forewing is metallic, dark green or blue-green, sometimes with a slight orange tint. The flying period is in one generation from April to June and the wingspan is 14-18mm. Host plant: Beech and Oak. Dutch name: Smaragdlangsprietmot. Frisian name: – 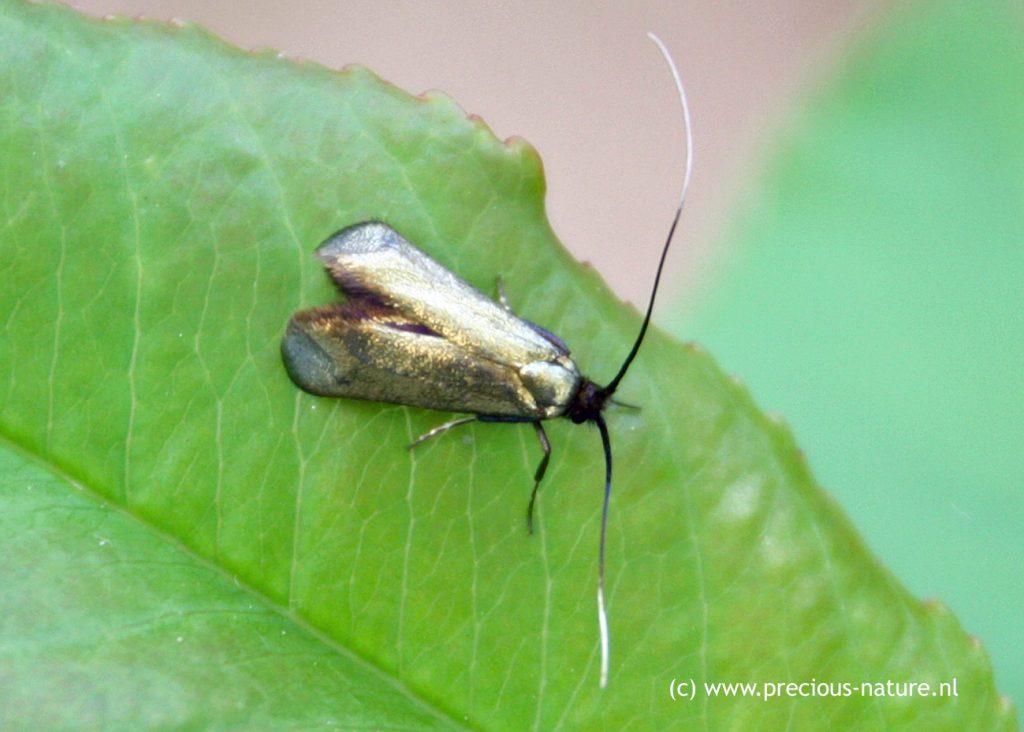 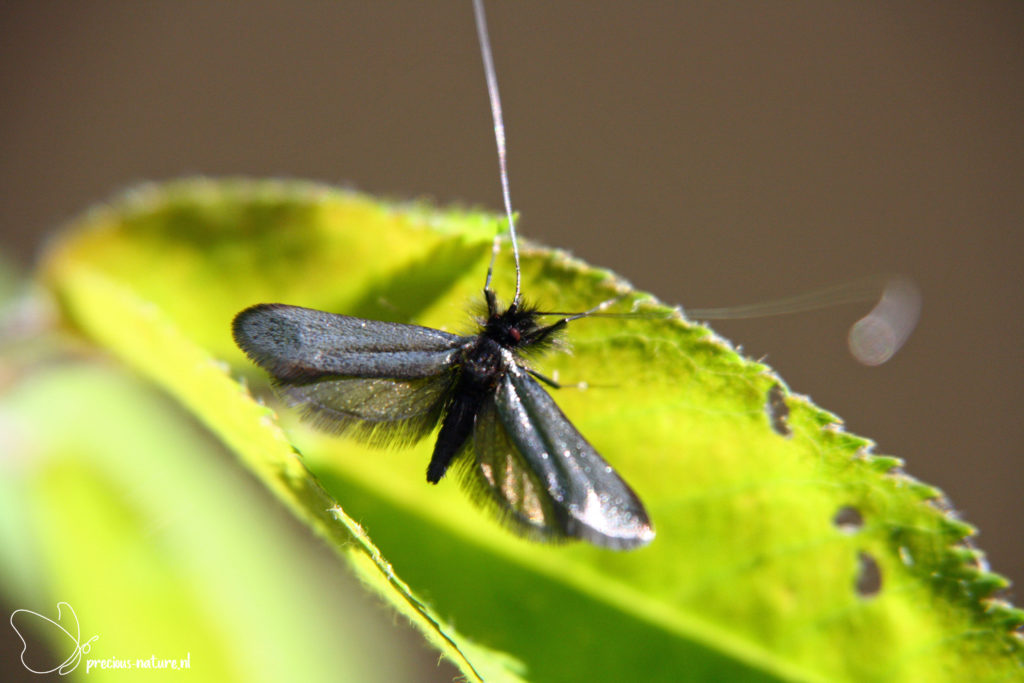 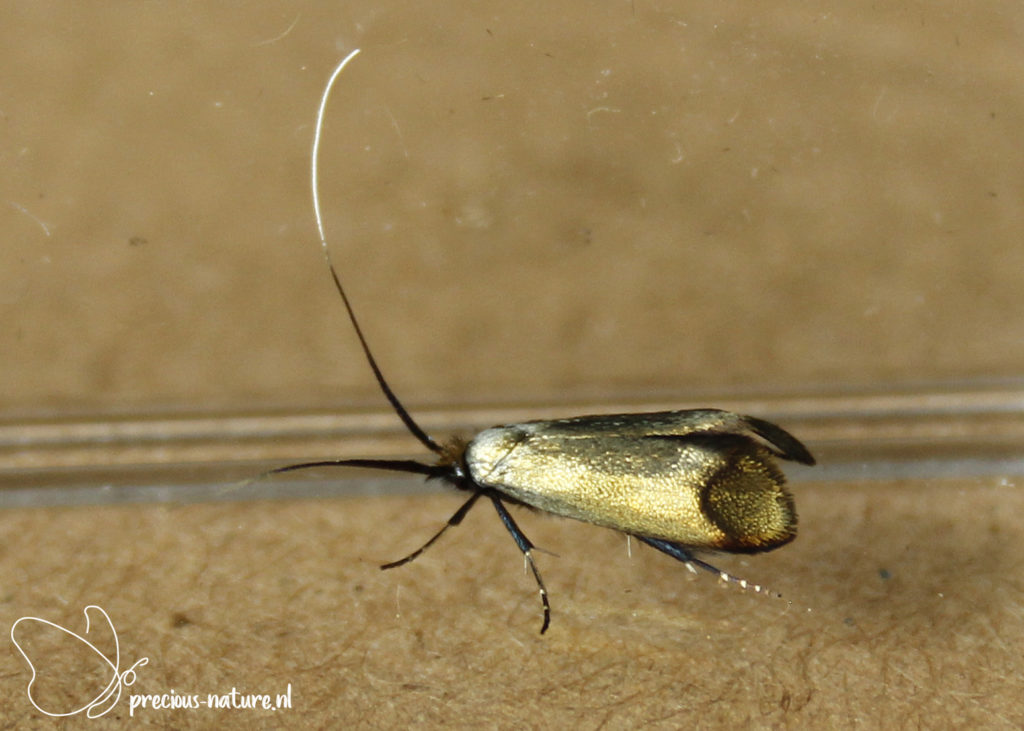 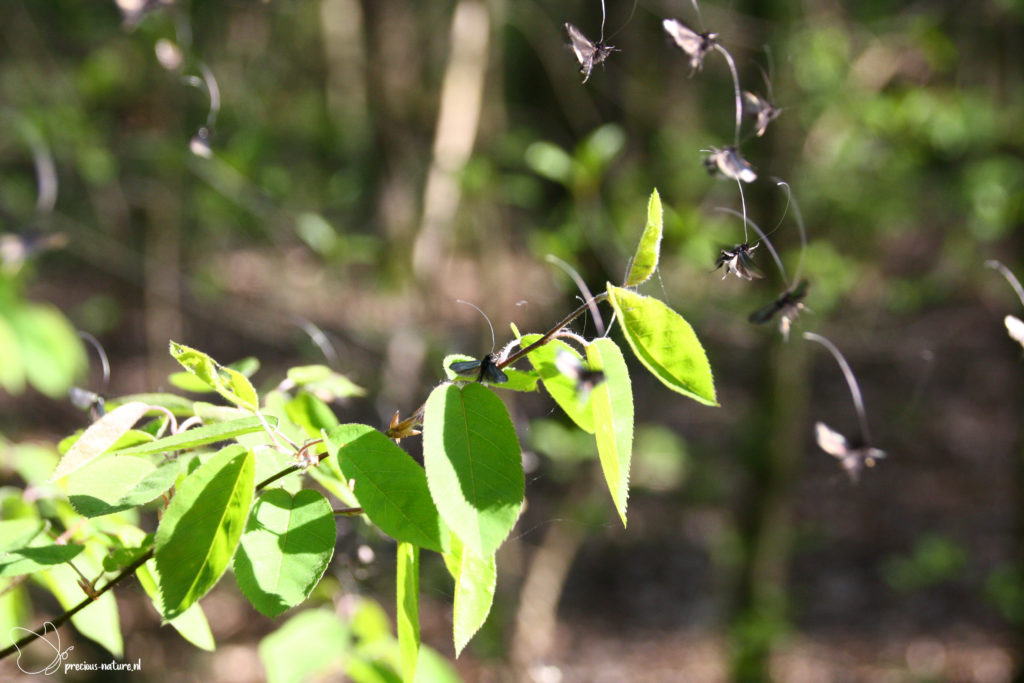 A fairly colorless fairy moth is the Large Long-horn (Nematopogon swammerdella). The forewing is pale grayish-yellow with an indistinct reticulate pattern. The base of the costa is sometimes a bit darker. This fairy moth is the largest of the simply colored fairy moths. The antenna is about 2 to 2.5 times the length of the forewing. The flying period is from April to June in one generation and the wingspan is 18-21mm. Host plant: Dead leaves on the ground. Dutch name: Bleke langsprietmot. Frisian name: – 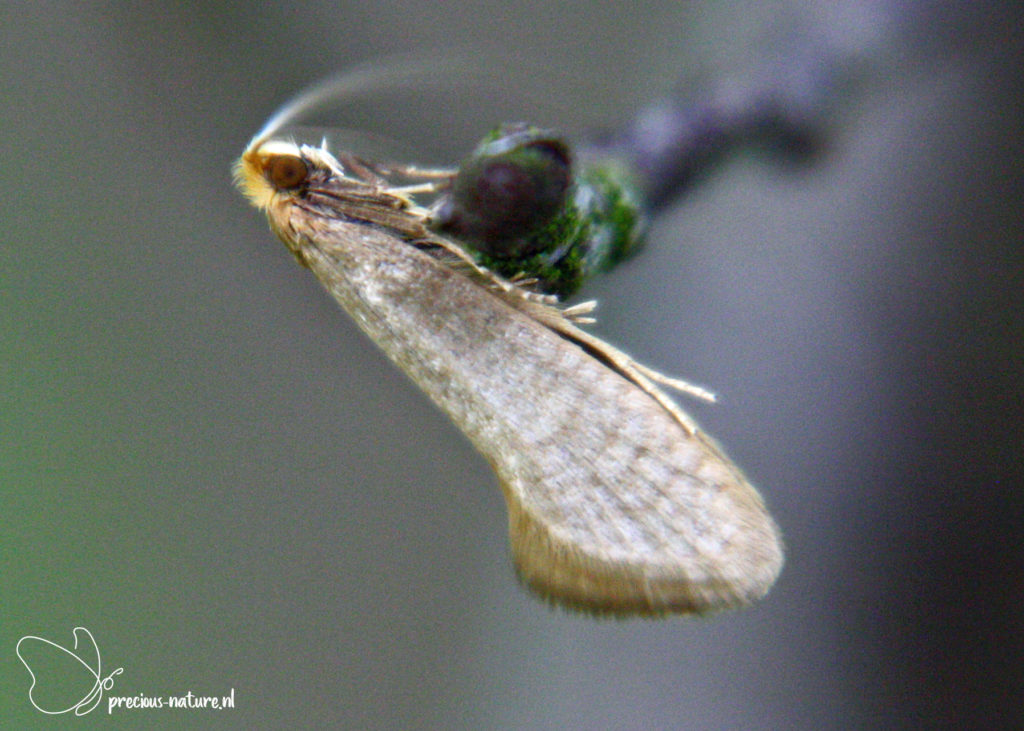 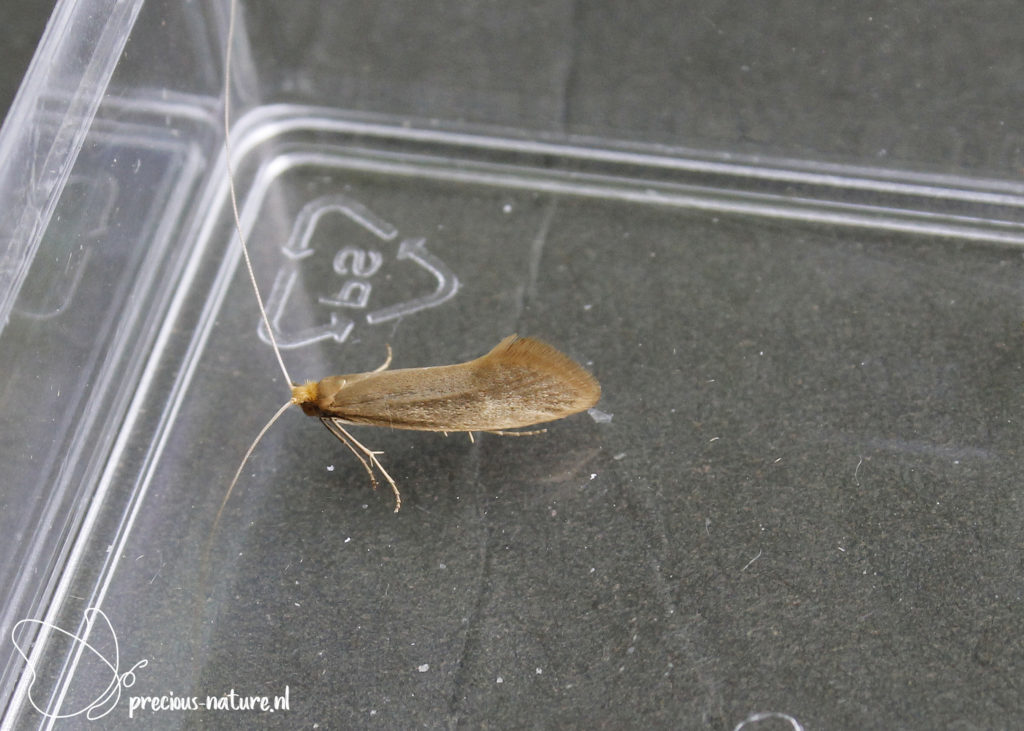 The Yellow-barred Long-horn (Nemophora degeerella) has a striking yellow cross-band on the top of the wing that also has brown to black stripes on a light yellow ground color. The antennas are remarkably long. Especially with the male. In sunshine you often see the males dancing in groups in the air and occasionally perching on the low vegetation in the forest. The flying period is from May to July and the wingspan is 16-23mm. Host plant: Dead leaf material. Dutch name: Geelbandlangsprietmot. Frisian name: – 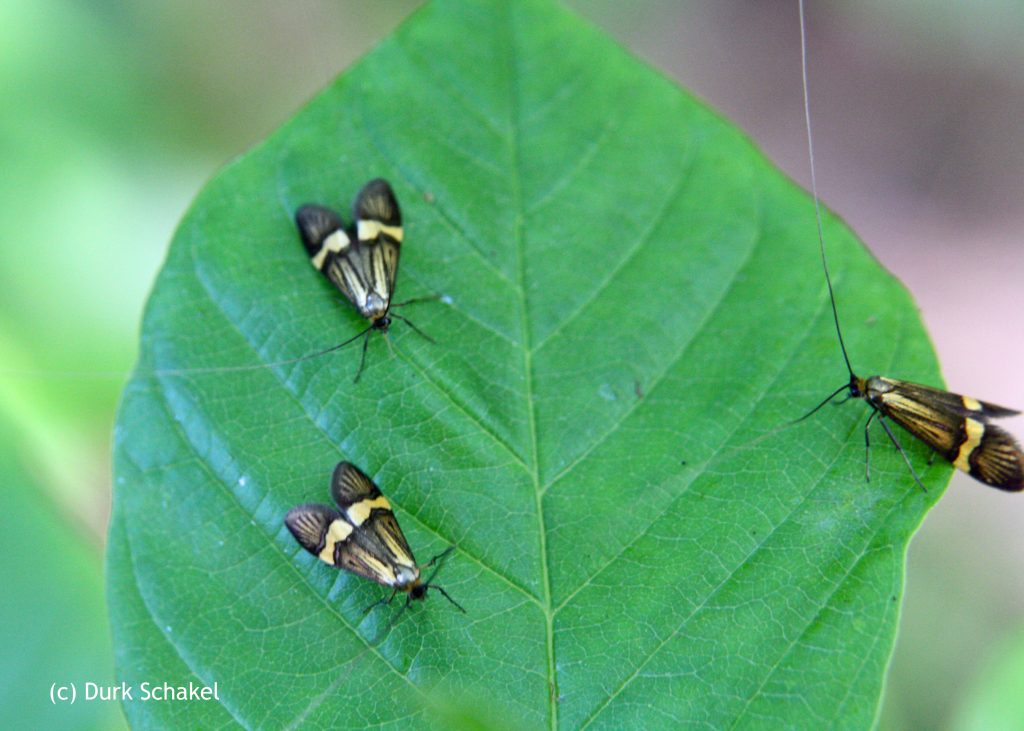 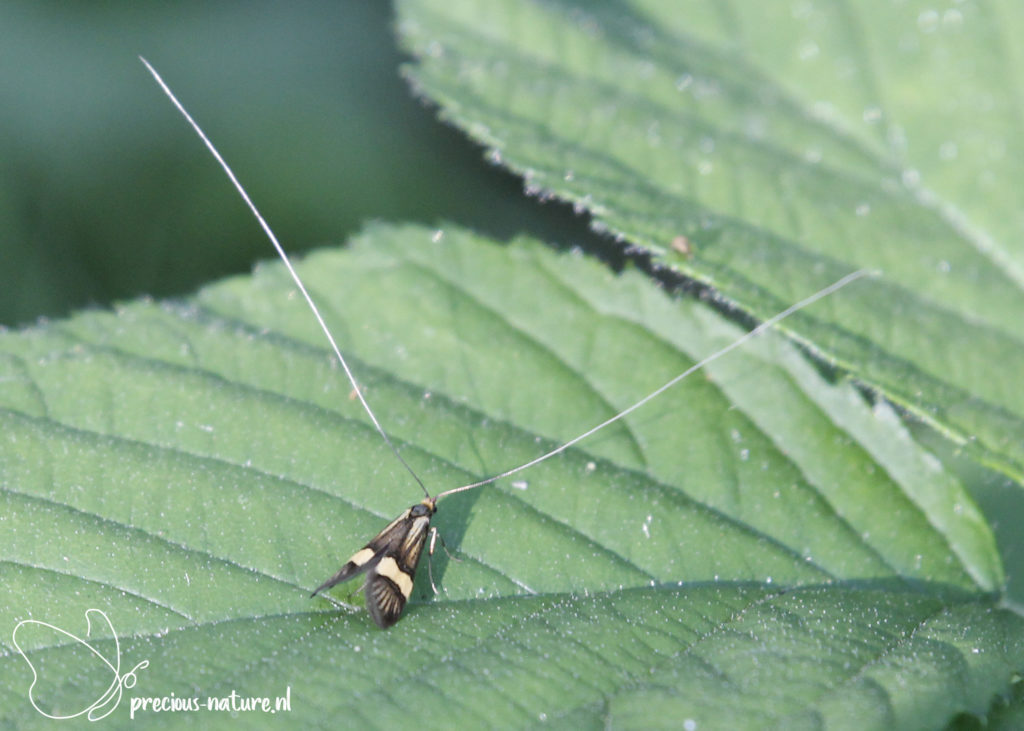