Geometrines (Geometrinae) are a sub-family of the Geometer Moths (Geometridae) of which there are many different genera but in small numbers and no sub-genera. These butterflies are mostly light blue-green, from which they get their name emerald moths. The forewings are generally characterized by 2 white cross-lines and the hindwing with one cross-line. Many taxonomic and phylogenetic studies have been undertaken in the period from 2010 – 2020, resulting in hundreds of new taxonomic changes since the online publication of the most recent checklist in December 2007 and a list of 2,643 valid species.

Visiting other areas often results in new species. During a moth session in a nature reserve, the beautiful Blotched Emerald (Comibaena bajularia) was attracted to the light. On the green wings, the white with brown spots at the tornus of the fore- and hindwings are clearly noticeable. The green color fades to creamy white as the moth ages. Another characteristic feature is the combination of creamy white with a reddish-brown checkered dorsum, without the protruding apex, which is present in other emeralds with a checkered fringe. The wingspan is 30-34mm and the flying period is in one generation from May to July. Host plant: Oak. Dutch name: Gevlekte zomervlinder. Frisian name: – 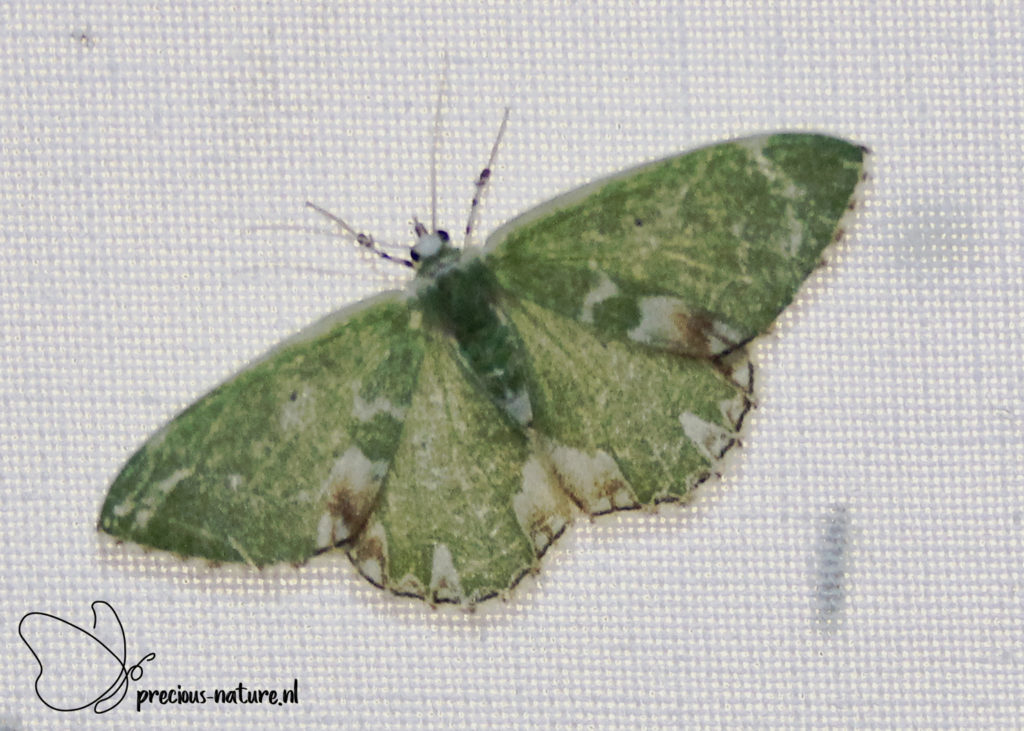 From 2017, the focus was besides day-active butterflies also on night-active moths. The Large Emerald (Geometra papilionaria) was a striking appearance for me when I first got it on the sheet at night using a UVA-lamp. You would expect this large moth with its characteristic green color during the day between other butterflies because of its resting position. He then holds them up slightly so that it looks like he is about to fly away. They fly at night and are attracted to light but also occasionally fly high in the tree canopy on warm, sunny days. The wing has a scalloped white cross-line and a dotted white cross-line. The termen is also scalloped and the wingspan is 50-60mm. This emerald flies in one generation from May to September. Host plant: Birch and Alder. Dutch name: Zomervlinder. Frisian name: Simmermjitflinter. 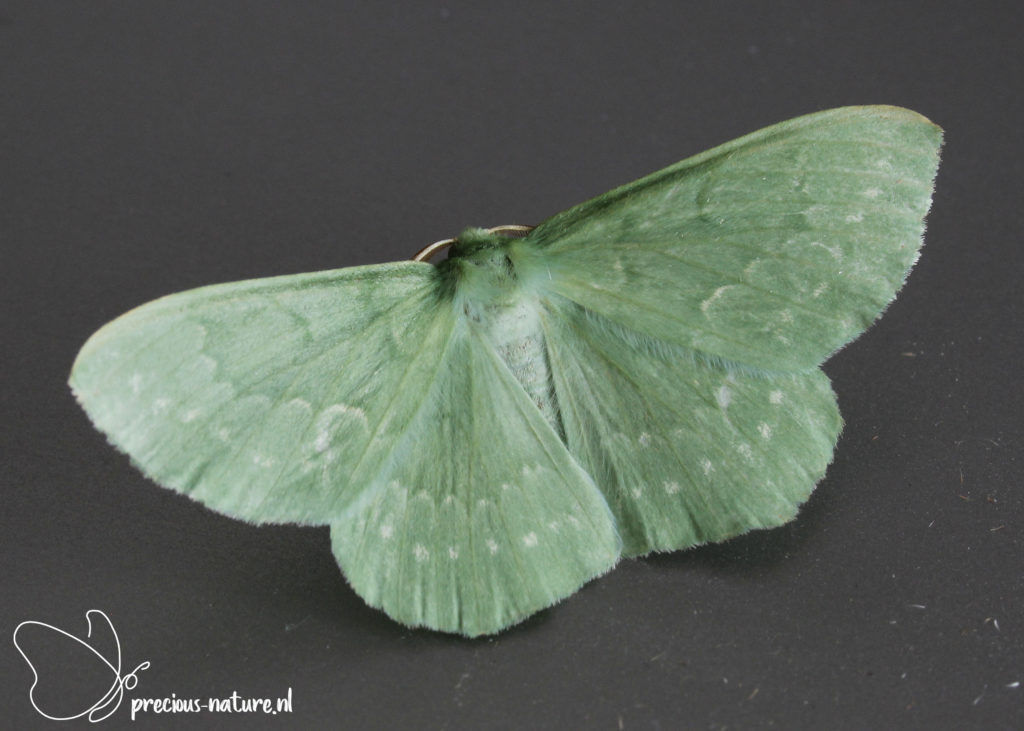 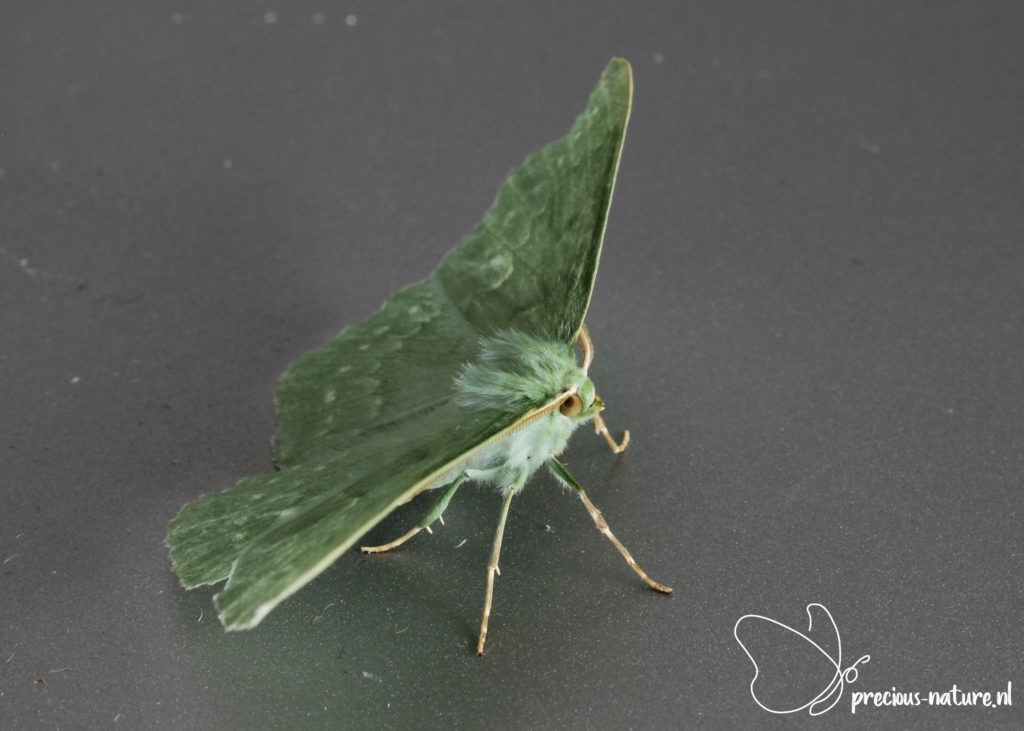 I spotted the Common Emerald (Hemithea aestivaria) in a nature reserve. This emerald is very similar to the Sussex Emerald (Thalera fimbrialis), but it has two points on the hindwing where the Common Emerald has only one point. The base color of the wing is green which fades as they age. The forewing shows two white wavy transverse lines and the fringes are chequered alternately white and brown. Only one white transverse line can be seen on the hindwing. The wingspan is 28-34mm and the flight period is one generation from May to August. Host plant: Hawthorn, Hazel, Oak, Willow, and Birch. Dutch name: Kleine zomervlinder. Frisian name: Lytse simmermjitflinter. 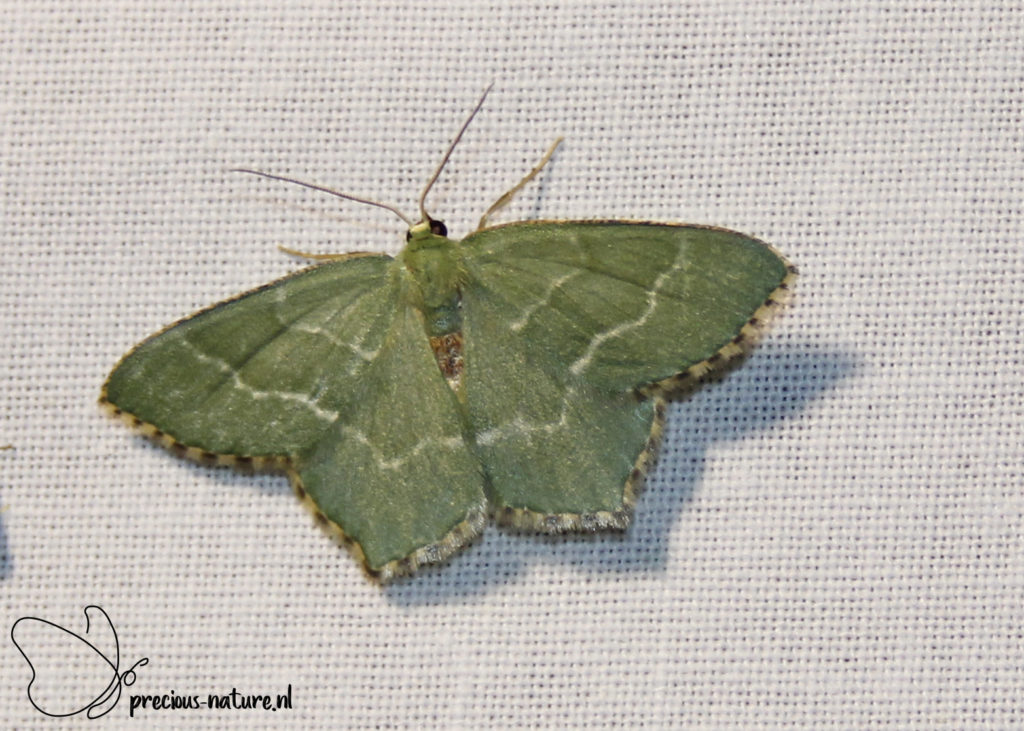 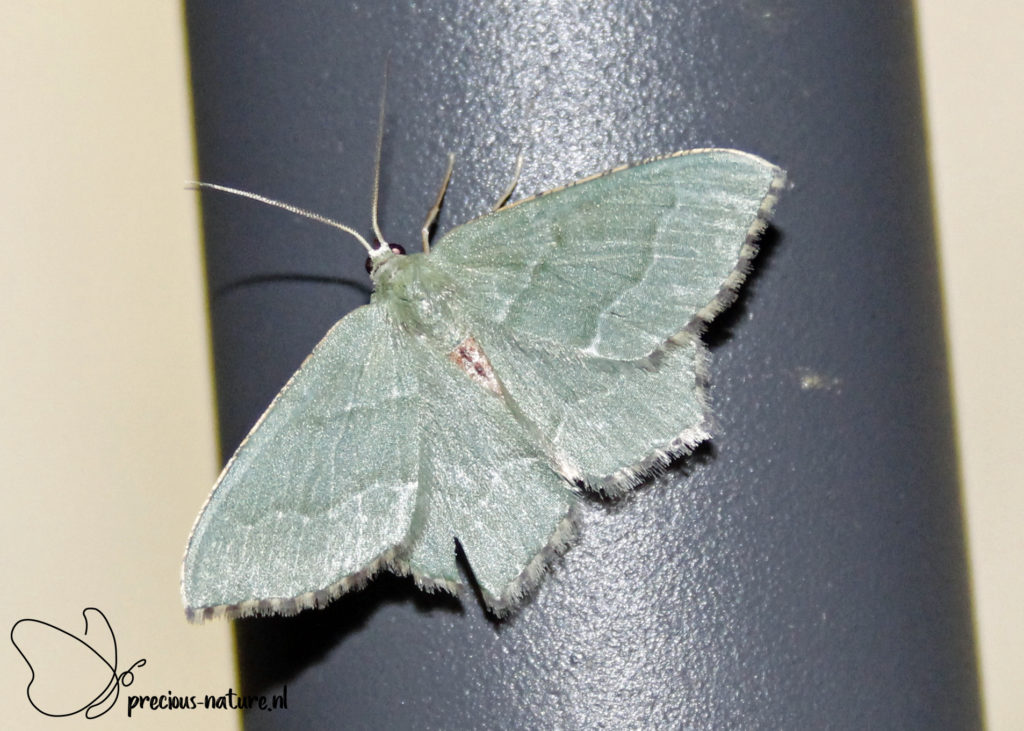 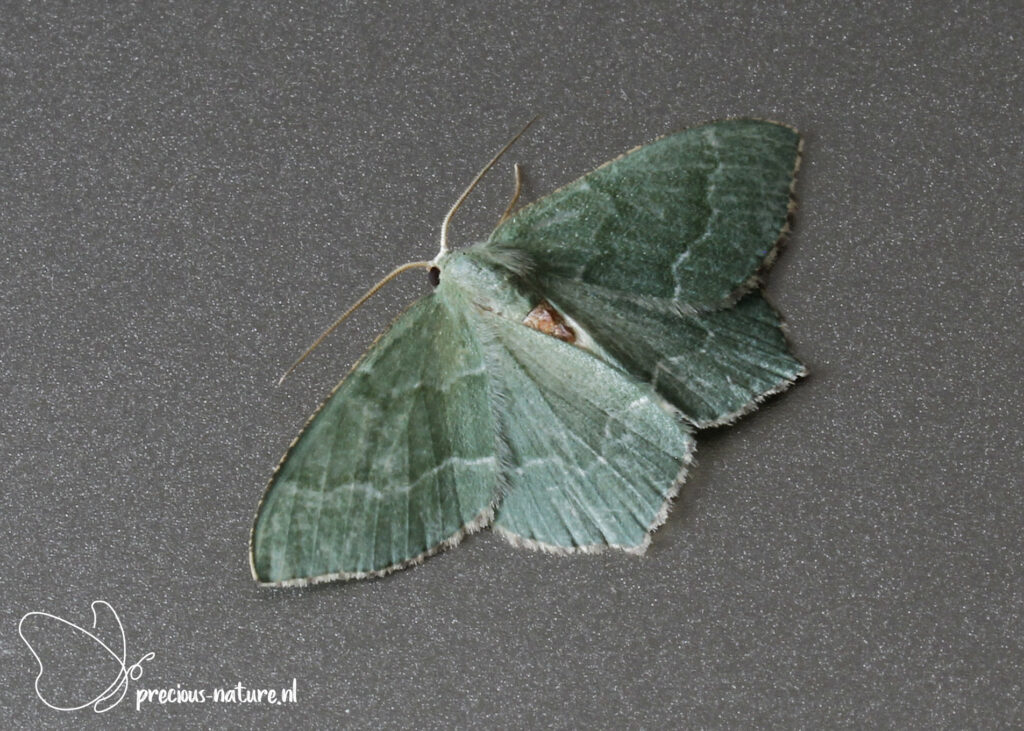 Sometimes you have to be lucky to discover a moth. During an evening walk, I just saw a light wing sticking out from under a leaf of a bush. This turned out to be a fresh specimen of the Little Emerald (Jodis lactearia). This can be seen in the pale green color, which then fades pretty quickly in time to milky white. The two white cross lines on both the fore- and hindwing are quite regular with the outer one running almost straight. The inner transverse line on the hindwing distinguishes this emerald from the other species that do not have this inner transverse line. The Little Emerald most closely resembles the Bilberry Emerald (Jodis putata). However, the latter has transverse lines that are curved, jagged, and sharply serrated. The wingspan is 22-26mm and the flight period runs from April to August in one sometimes two generations. Host plant: Birch, Oak, and Blueberry. Dutch name: Melkwitte zomervlinder. Frisian name: – 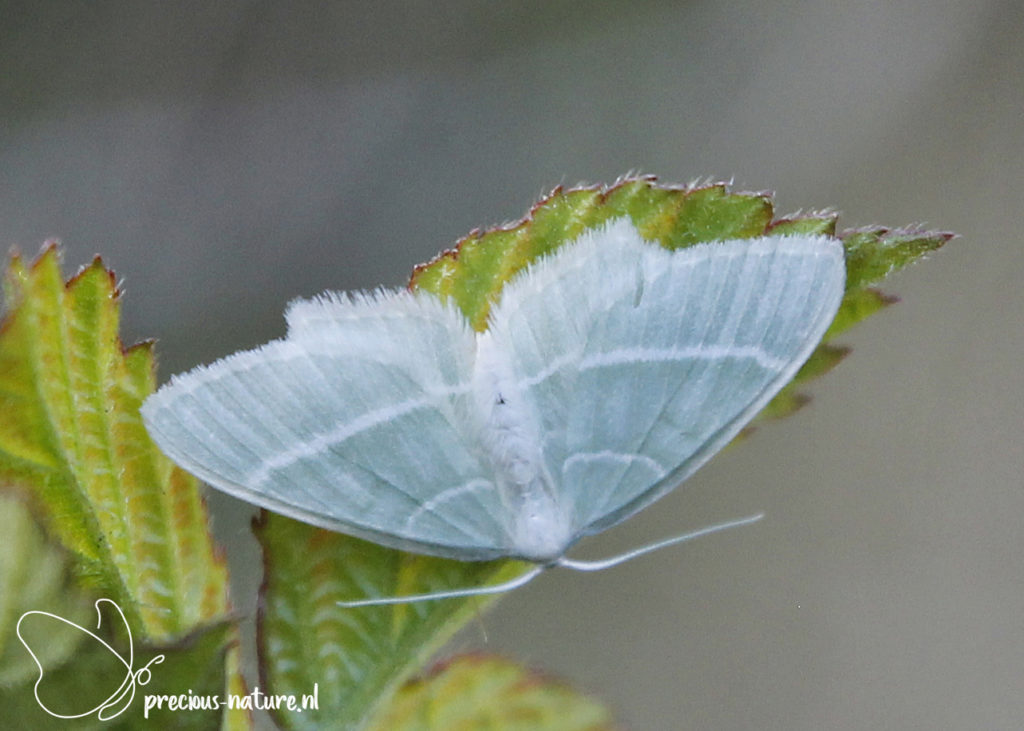 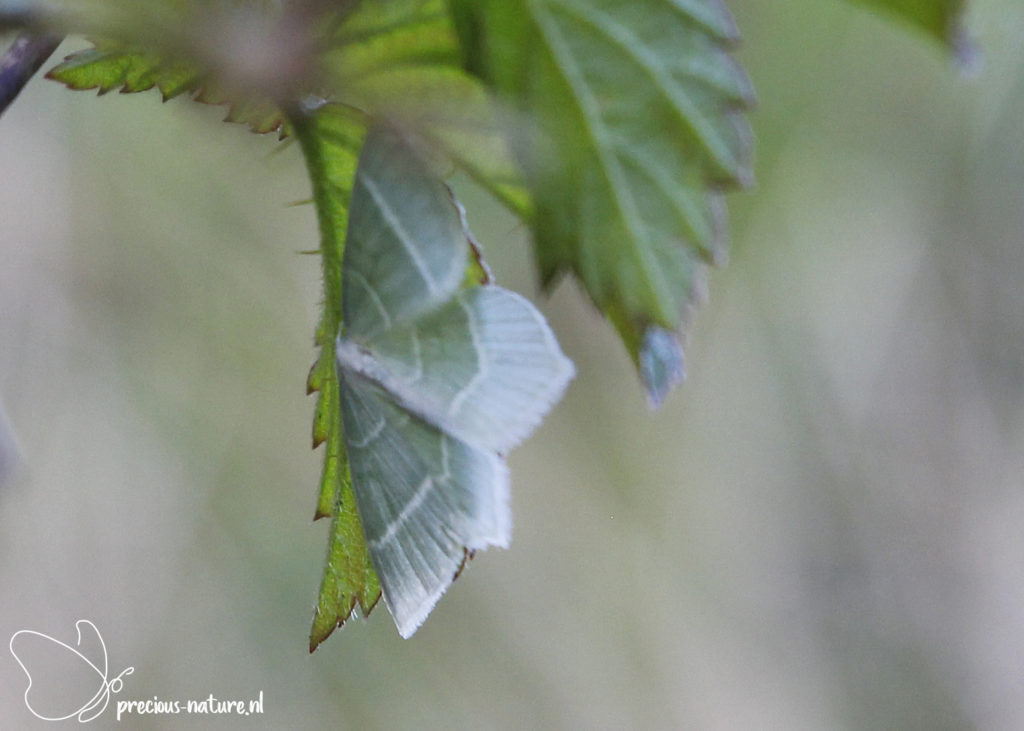