The Sphinx and Hawkmoths (Sphingidae) are generally large. The smaller species usually fly during the day, and most feed much like hummingbirds, hovering in front of a flower and sipping nectar through the extended proboscis. The proboscis rolls up when not in use. The night-active species can be found resting during the day. These are often fresh copies. They have a strikingly thick body, long narrow forewing and are often strikingly coloured. The wingspan varies from 35-150mm. Since 2017 I use a special lamp and a white sheet to photograph moths. The Sphingidae are strong and fast flyers, with a rapid wingbeat. The species that are active at night get well on UVA light by flying around restlessly like a humming top and eventually find peace on the sheet.

The Broad-bordered Bee Hawkmoth (Hemaris fuciformis) resembles a bumble-bee and is a species that flies around during the day in sunny weather. You often see them flying around honeysuckle, but also Bugle, and Rhododendron. The abdomen is colored with two white spots and a reddish-brown band. They have long clubbed antennae and are much larger than the superficially similar bee-flies. The wingspan is 40-48mm.  Because they hardly sit quietly, I have not been able to take a good picture of this butterfly. In addition, I rarely encounter them in the North. This hawkmoth flies around in two generations from May to August. Host plant: Wild Honeysuckle and Snowberry. Dutch name: Glasvleugelpijlstaart. Frisian name: Glêswjukpylksturt. The Elephant Hawk-moth (Deilephila elpenor) is an easily recognizable moth. The body is olive-green with a pink broken straight line on the abdomen, like the centerline on a road, running towards the pink point tail. A pink line pattern can be seen near the head. Pink transverse stripes can also be seen on the top of the forewing. The underside of the body is coloured pink. The wingspan is 43-60mm. This butterfly flies in one generation from May to September. Host plant: Willowherb, Bedstraw, and Enchanter’s Nightshade. Dutch name: Groot avondrood. Frisian name: Oaljefantsflinter. 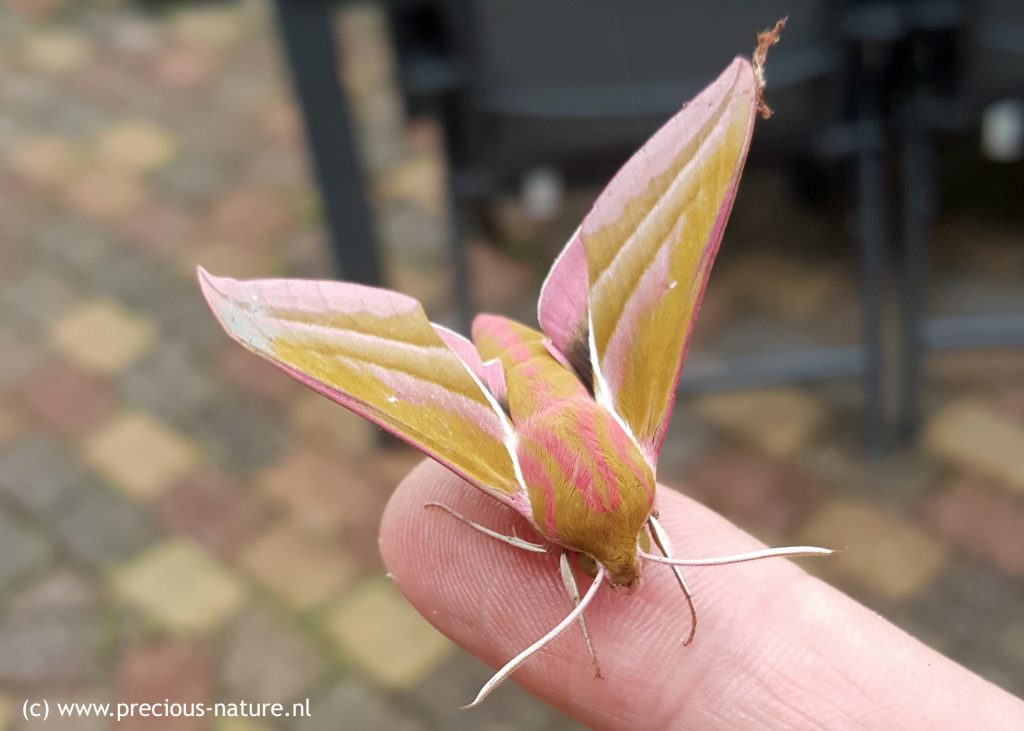 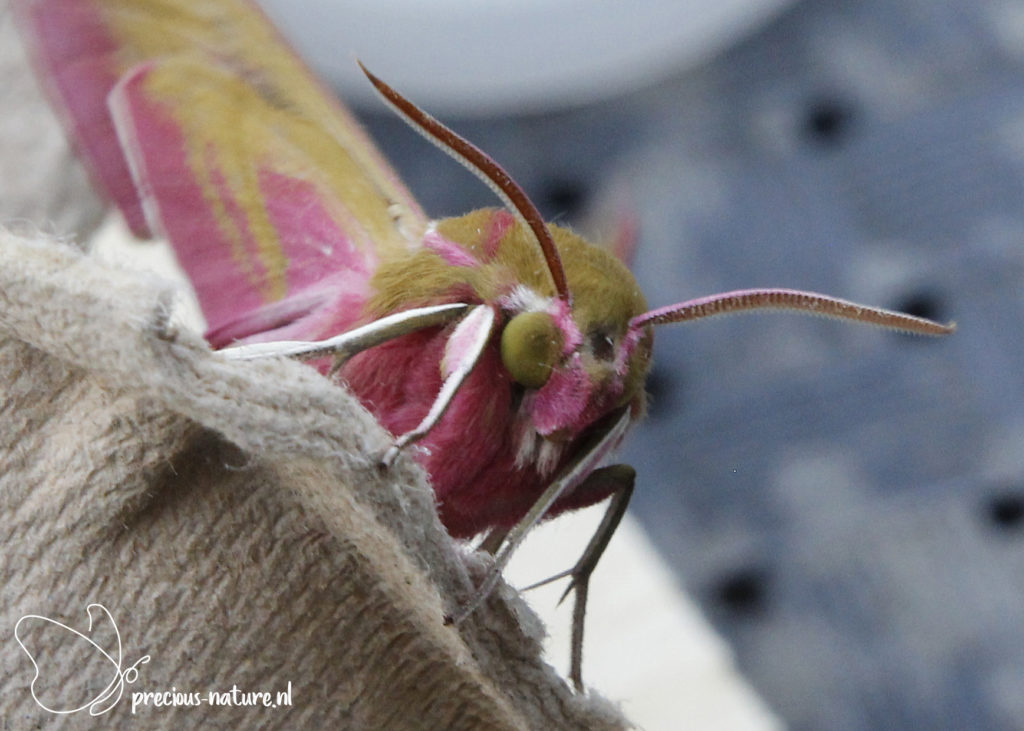 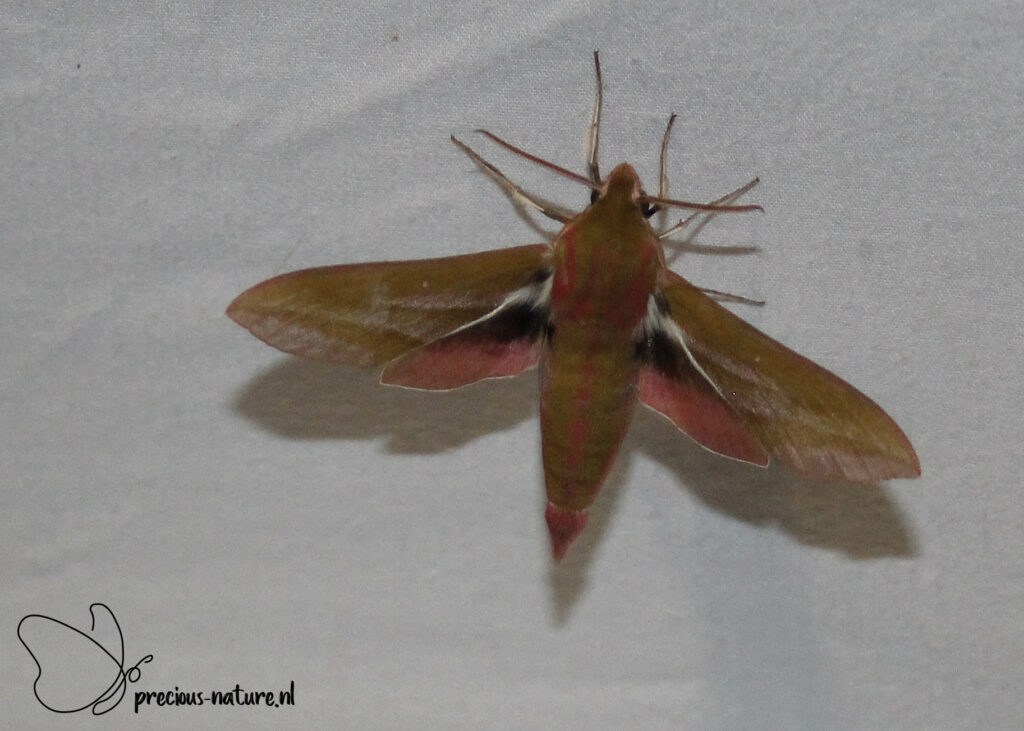 The Hummingbird Hawkmoth (Macroglossum stellatarum) is very similar in behaviour to the hummingbird. He stands still in the air with his quick wingstroke in front of a flower to drink nectar. The main color of the top of the wing is brown with some dark brown transverse lines. During the flight, the orange color of the underside of the wings is clearly visible. The wingspan is 50-58mm. The hummingbird butterfly flies around from February to November and often during the day. Host plant: Lady’s Bedstraw and Wild madder. Dutch name: Kolibrievlinder. Frisian name: Kolibryflinter. 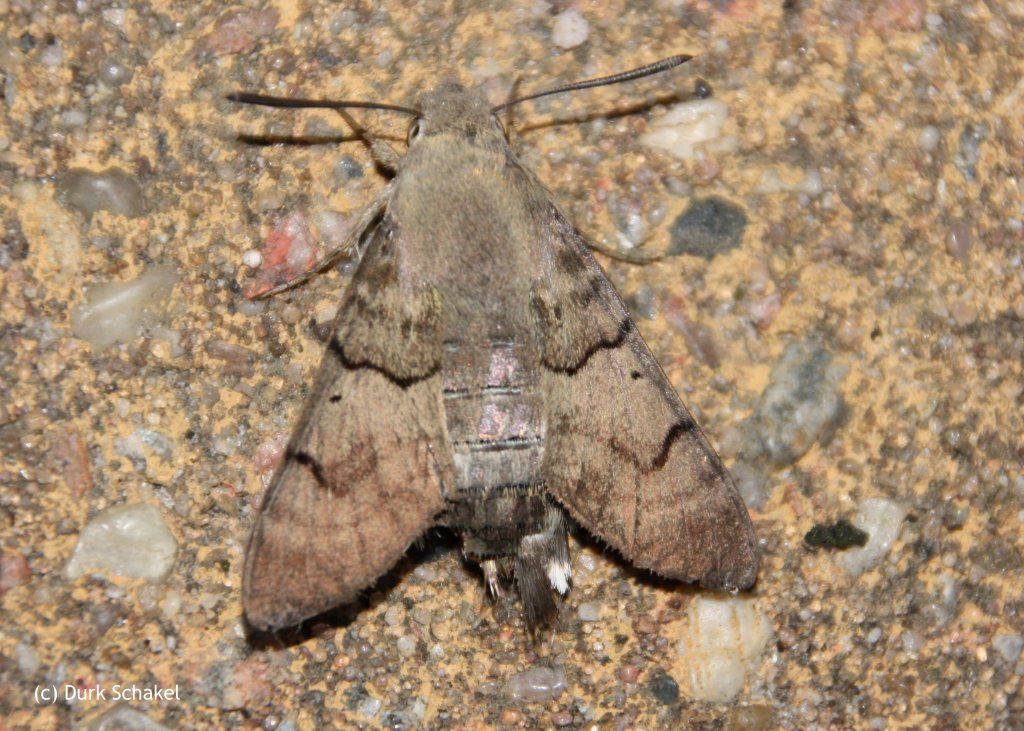 The Poplar Hawk-moth (Laothoe populi) has a striking sight and flies in two generations from April to August and the wingspan is 65-90mm. The first time I saw this hawk-moth was in the grass during the day. This was probably a fresh specimen because this large moth does not normally occur during the day. Both the top of the fore- and hindwing are grey with strikingly large brown stains. A small white spot can be discovered on the forewing. When the butterfly is at rest, the hindwing protrudes past the forewing and the abdomen is curved up. If disturbed, the moth flashes reddish-brown patches on the underwings. The thick head has grey hair. Host plant: Poplar and Willow. Dutch name: Populierenpijlstaart. Frisian name: Peppelpylksturt. 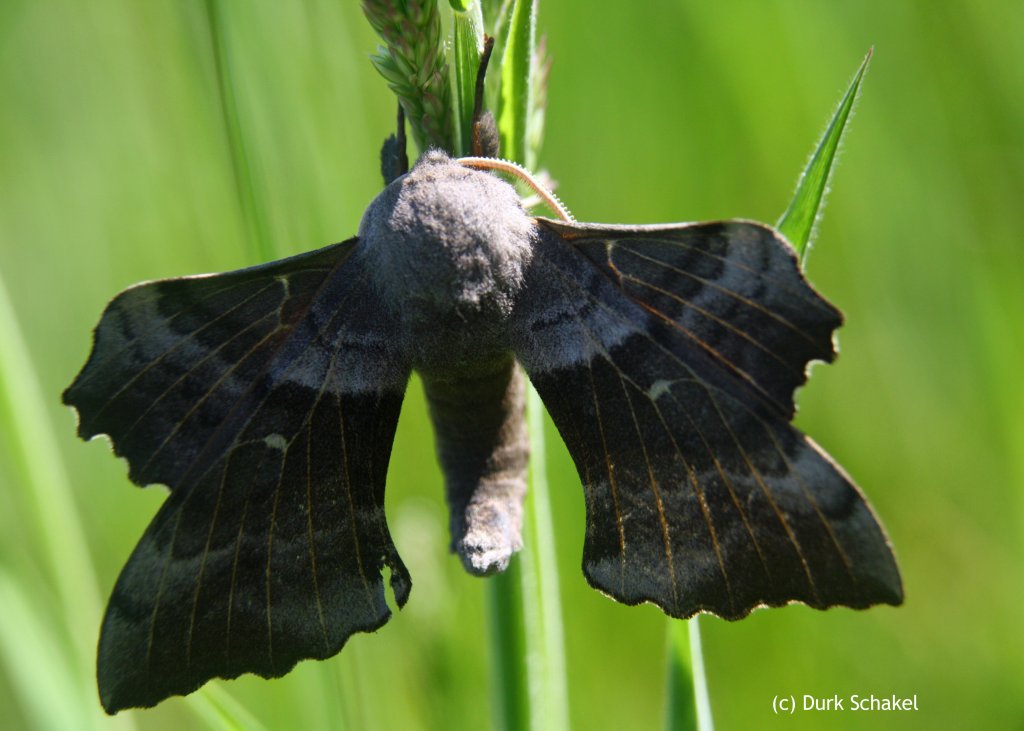 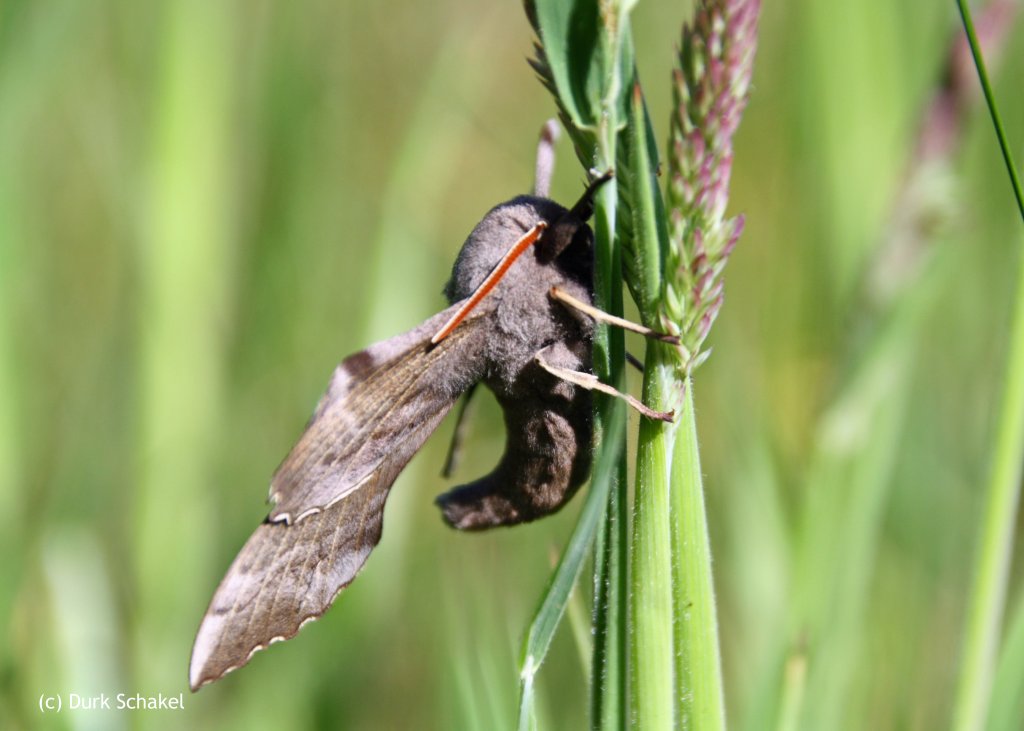 The morning after a moth session, I removed the white sheet and a big surprise came forward. The Eyed Hawk-moth (Smerinthus ocellata) was sitting very quietly on the canvas. This big moth owes its name to the eyespot on the pink-red hindwing. The eyespot consists of a blue stain with a black border and a black spot in the middle. As soon as it is disrupted, the hindwings are shown, to scare natural enemies. He then takes the opportunity to flee. The color of the forewing can range from pinkish-brown to deep chocolate brown or even black. The contrast of the forewing is very variable and somewhat resembles the bark of a tree trunk. The wingspan is 70-80mm and the flight period is from April to August in one generation. Host plant: Willow, Poplar and Apple. Dutch name: Pauwoogpijlstaart. Frisian name: Pau-eachpylksturt. 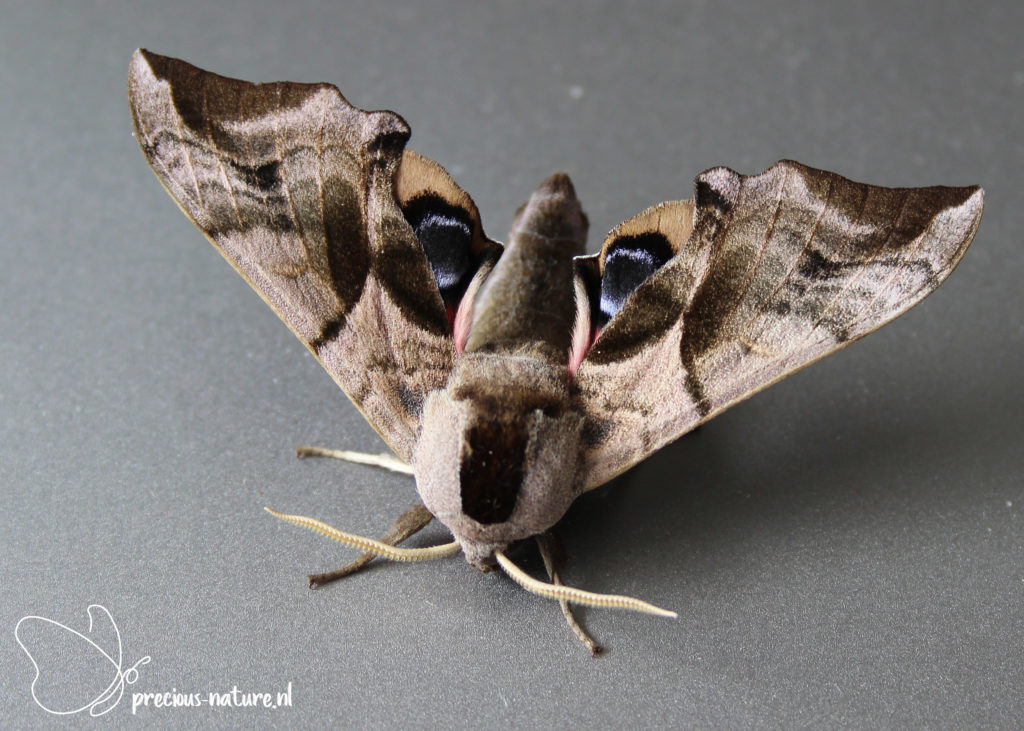 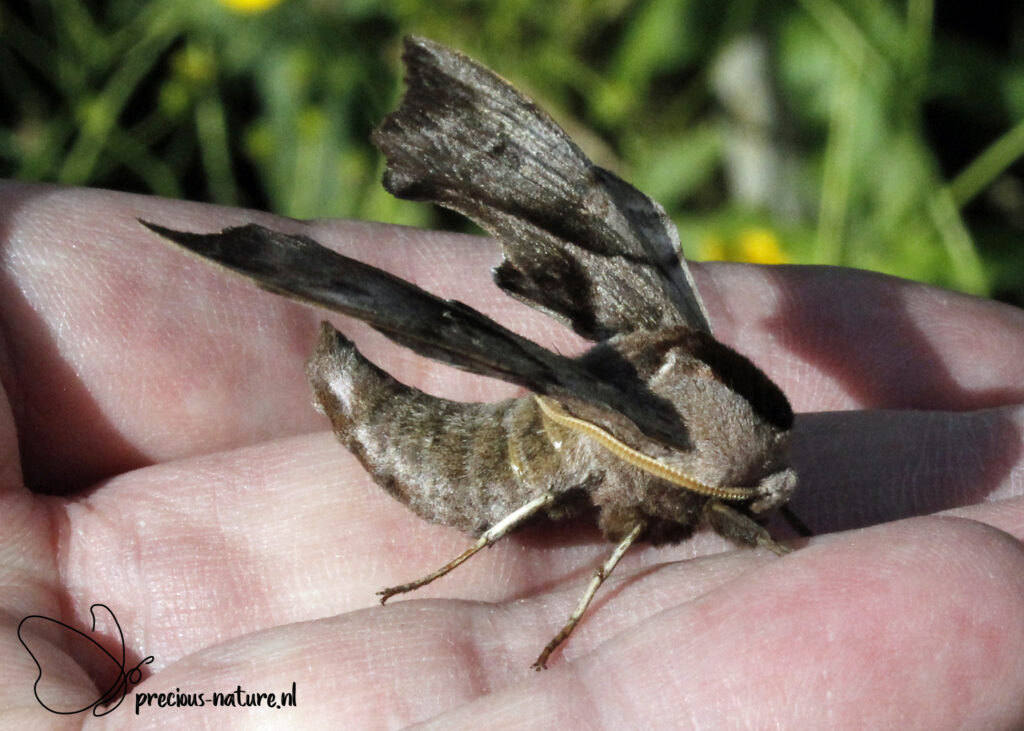 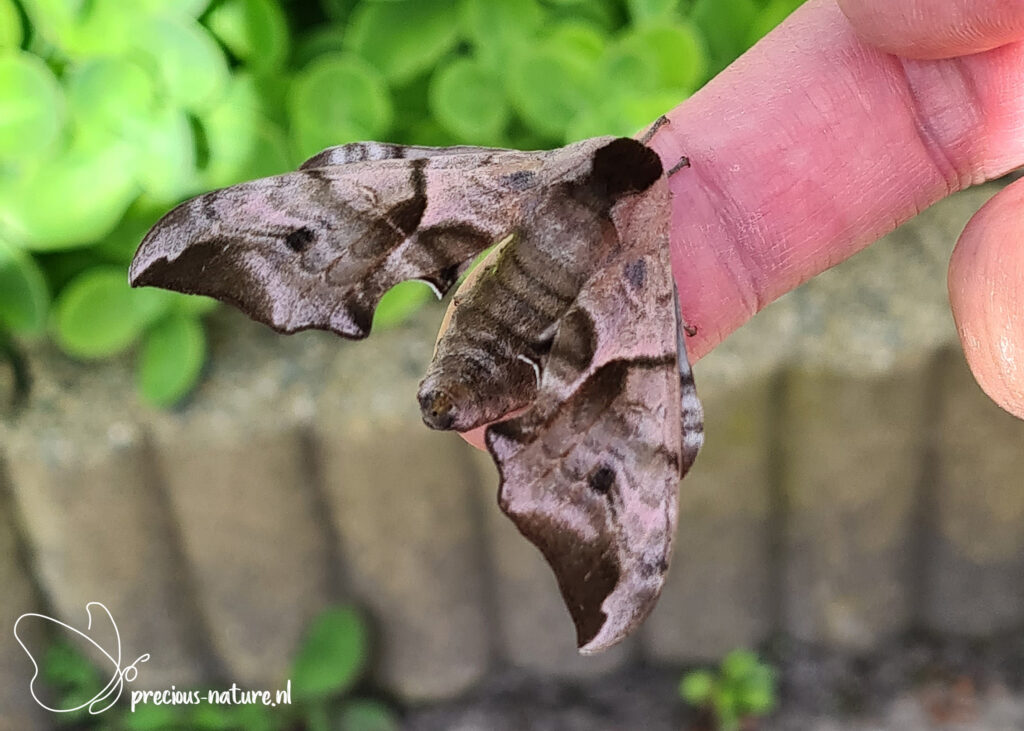 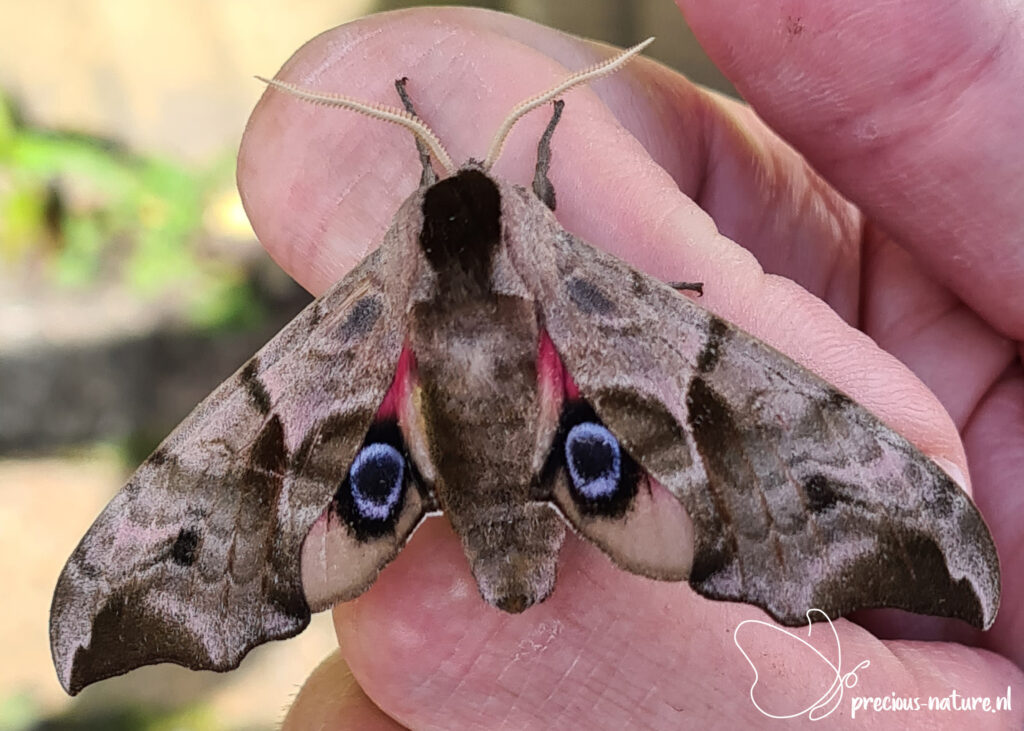 The Privet Hawk-moth (Sphinx ligustri) is easily recognizable by its blackish top of the head and the dark brown stain along the dorsum of the forewing. The abdomen and hindwings are striped pink and black. This moth flies in one generation from May to September, flies at night and is attracted to light. He feeds on nectar from highly-scented flowers. Freshly emerged adults can sometimes be found resting vertically. The wingspan is 90-120mm. Interestingly is that the caterpillar overwinters as a pupa, 30 cm or more underground. Host plant: Privet, Lilac, Ash saplings, Snowberry, Guelder-rose, and Honeysuckle. Dutch name: Ligusterpijlstaart. Frisian name: Ligusterpylksturt. 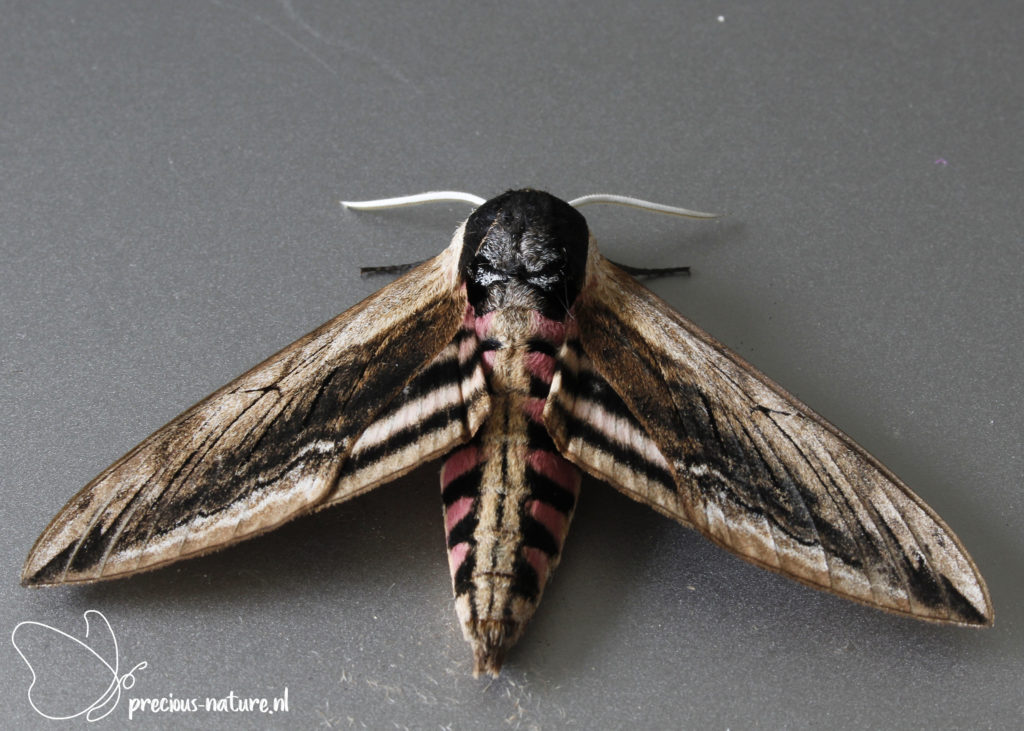 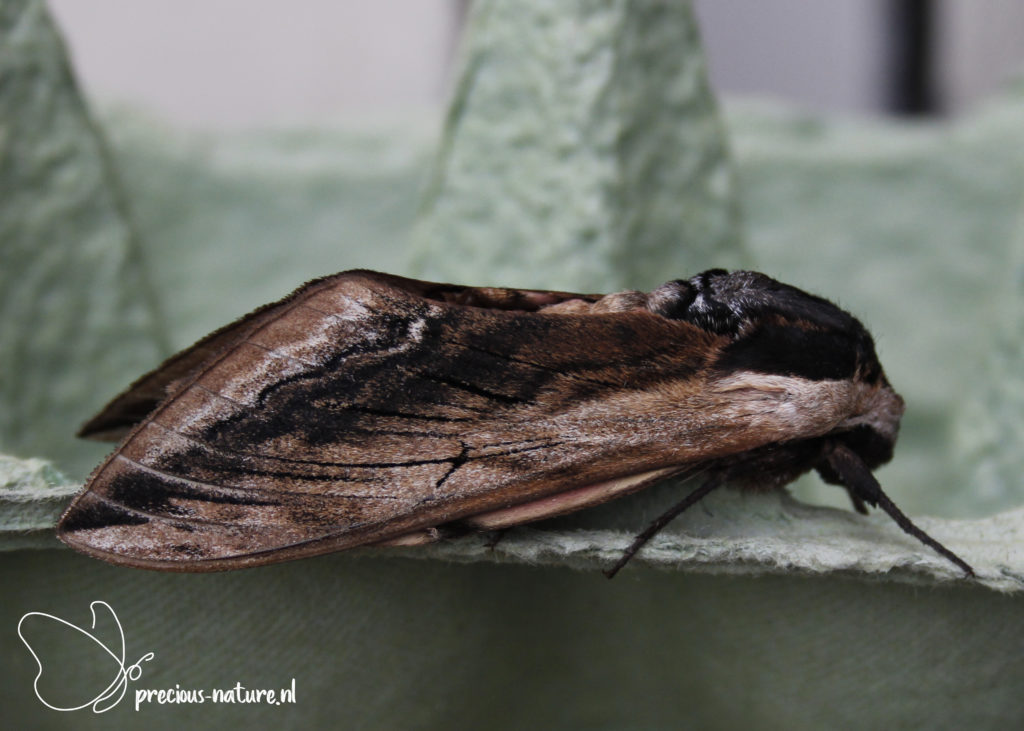 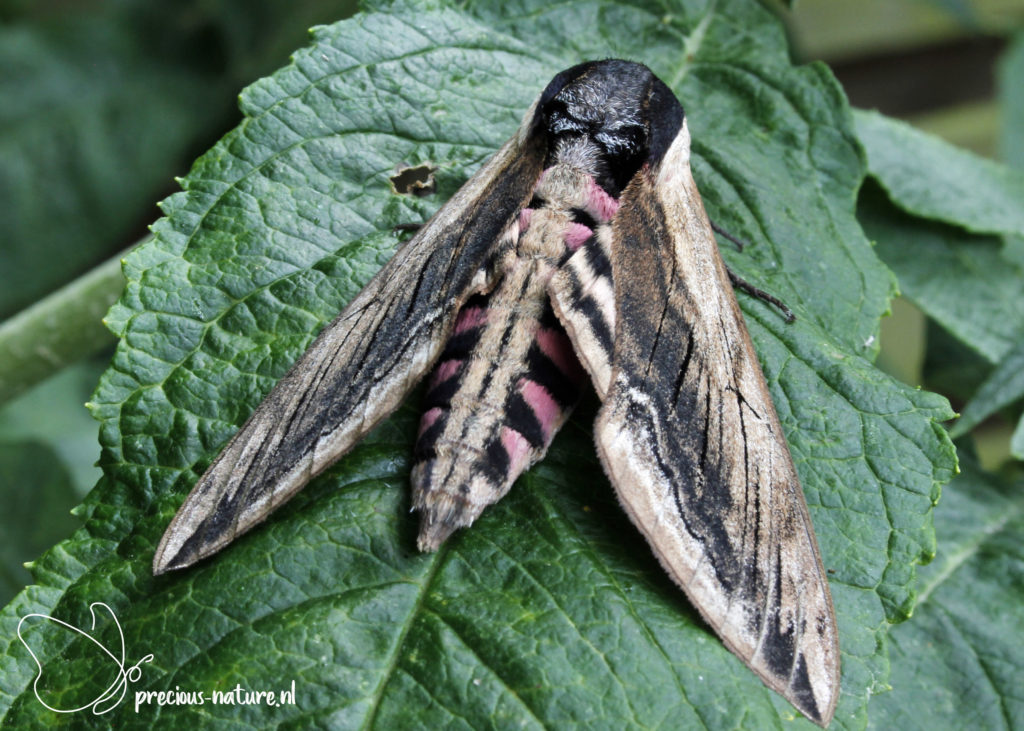 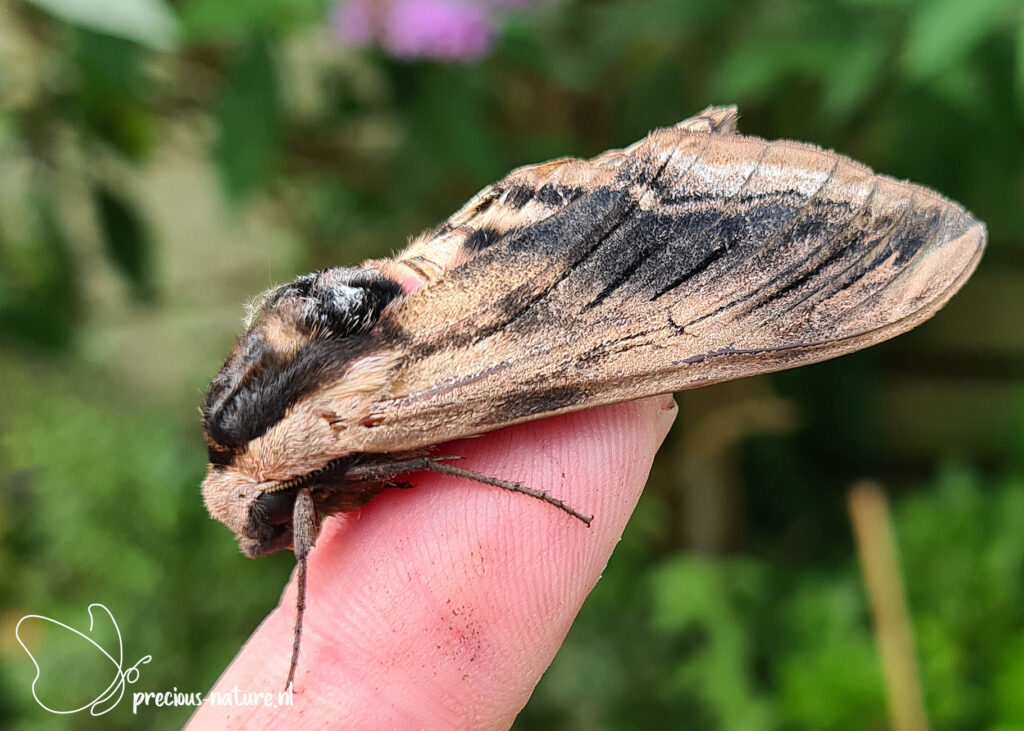