Emperors (Apaturinae) are large butterflies that are a subfamily of the Brush-footed Butterflies (Nymphalidae). This subfamily consists of 20 genera and shows distinct distributions and unique host plant associations. Most genera of this subfamily are found distributed in Eurasia, Southeast Asia, and Africa, while the genera Doxocopa and Asterocampa are mainly found in South America and North America, respectively. Although the larvae mainly feed on the plants of the hemp family (Cannabaceae), those of the genus Apatura are associated with the Willow and Poplar (Salicaceae), which are distantly related to the hemp family. The males have a strong purple sheen on the top of the forewing. The deep purple-blue sheen is produced by light refracted by ridges on the wing scales. The color is only visible from certain angles and in bright light. The females lack the glare and have larger white or orange spots. The males come to the ground in the morning to drink from the moist soil. For the rest of the day, the butterflies can be found in the treetops.

Sometimes you have to be a bit lucky to encounter certain butterflies. Normally, the Purple Emperor (Apatura iris) sits high in the trees and only comes to the ground in the morning to drink from the excrement or carcasses of small animals. They care about the minerals that are present. At the end of my route through the Eifel area, I suddenly saw this beautiful large butterfly 5 meters high on a leaf of the tree. Unfortunately, I was only able to photograph the underside of the wing so that when it was a male I could see the distinctive blue-purple reflection. The female does not have this color. The underside of the hindwing is chestnut brown with a broad white band with a clear tooth on the outside in the midfield. The flight period is in one generation from mid-June to early August and the wingspan is 60-74mm. Host plant: Willow. Dutch name: Grote weerschijnvlinder. Frisian name: Grutte wjerskynflinter. 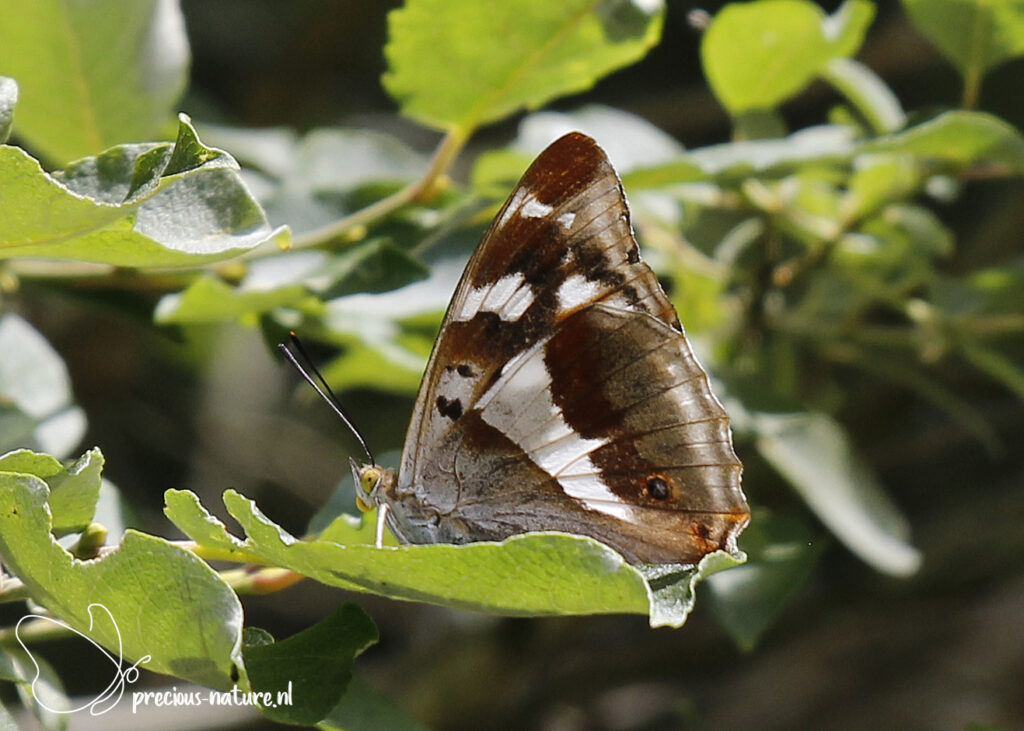