The Plusiinae are a subfamily of Owlet Moths (Noctuidae). Many specimens from this subfamily have a metallic or striking white marking on the front wing and a protruding crest at the head.

During moths sessions, you sometimes do not immediately see what is on the canvas or has sat down close to the wall or fence. When you look closely at the photos later, you suddenly see that you have spotted a new species. This also applies to the Dark Spectacle (Abrostola triplasia), where I only saw the unique drawing when I looked at the photo. The forewing is predominantly dark brown with a straw-yellow base. The base of the Spectacle (Abrostola tripartita)) is silver-grey. The owl marks are located in a dark grey zone that is outlined in reddish-brown and are colored just a bit lighter than the area in which they are located. When you look at this owlet moth from the front, it looks like he has brown glasses (hence his English name). The flight period is in two and sometimes three generations from April to October and the wingspan is 28-32mm. Host plant: Nettle and hops. Dutch name: Donker brandnetelkapje. Frisian name: – 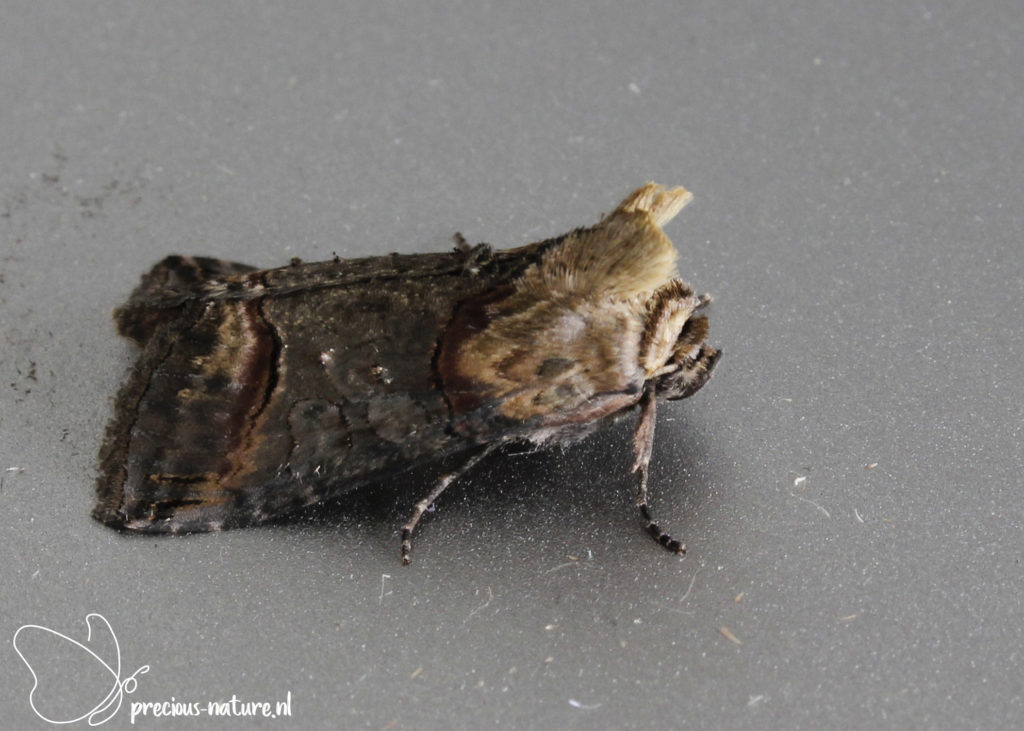 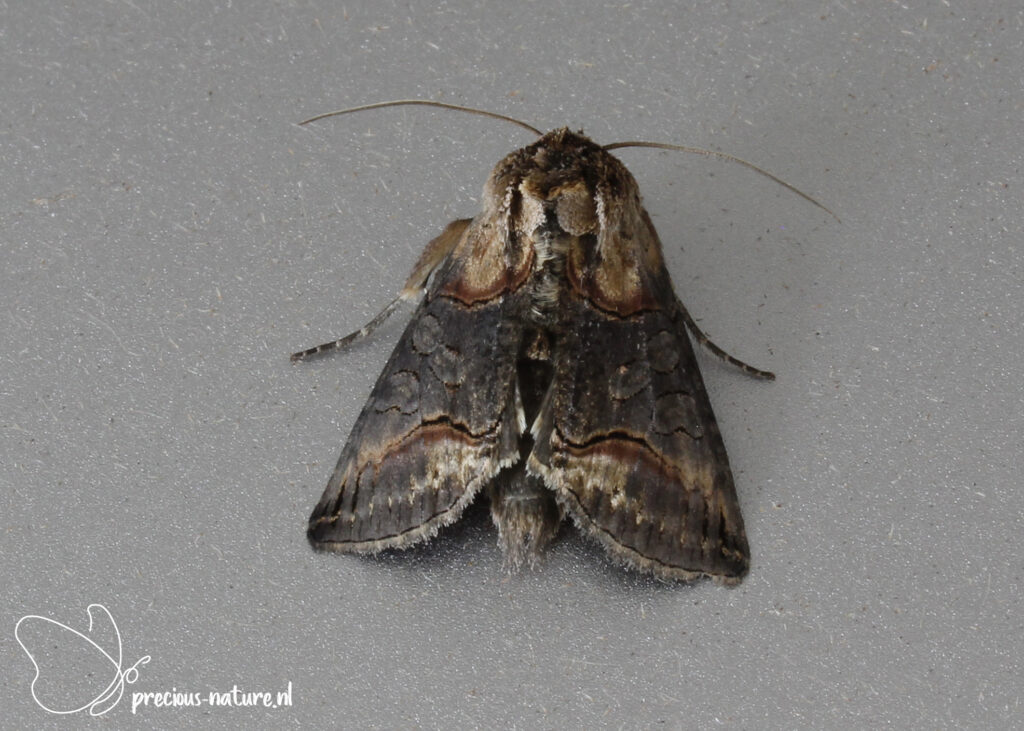 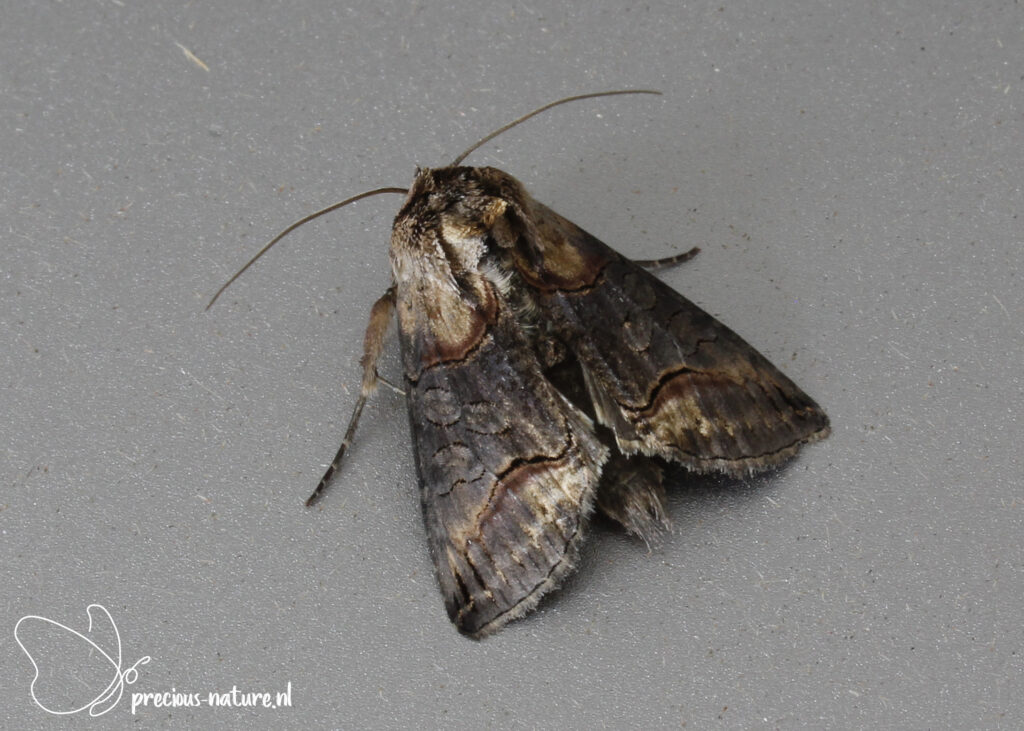 The most distinctive feature of the Silver Y (Autographa gamma) is a continuous white-yellow Y-shaped spot in the center of the forewing. The forewing is also brown and grey marbled and has a light-colored spot on the outside of the outer transverse line. This owlet moth keeps its wings roof-shaped above its abdomen and on the top of the brisket is a crest with two smaller crests slightly further back. It flies in several generations from April to October and the wingspan is 30-45mm. Host plant: Bedstraws, Clovers, Common Nettle, Garden Pea, and Cabbage. Dutch name: Gamma-uil. Frisian name: Pistoaltsje. 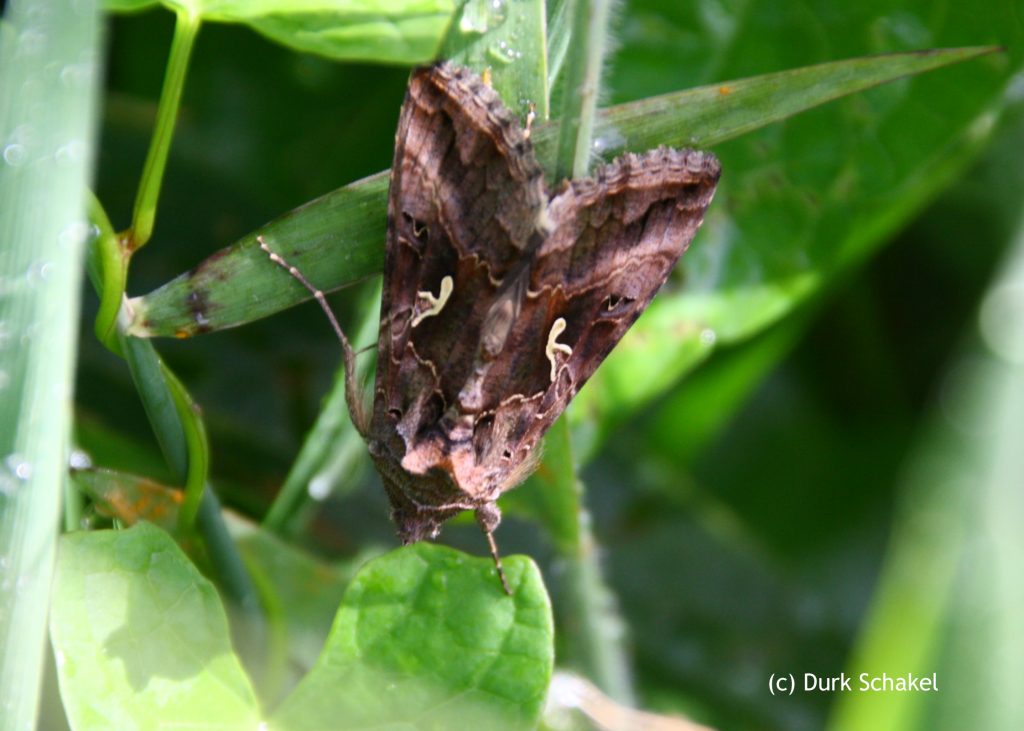 Like its congeners, the Golden Twin-spot (Chrysodeixis chalcites) holds its wings roof-shaped in the rest position. A visible crest can be seen on the top of the thorax and a second small crest a little further back. The forewing is pinkish or brownish gray and has a varying golden glow. In the center of the wing is a visible silver spot, usually divided in two, with a spur in the direction of the wing base. A specific, but not always visible, feature is a black mark in the fringe midway down the trailing edge of the forewing. The flight period of this moth, which is normal in Southern Europe and in tropical Africa, is from June to November and the wingspan is 33-44mm. Host plant: vegetables and fruit trees. Dutch name: Turkse uil. Frisian name: – 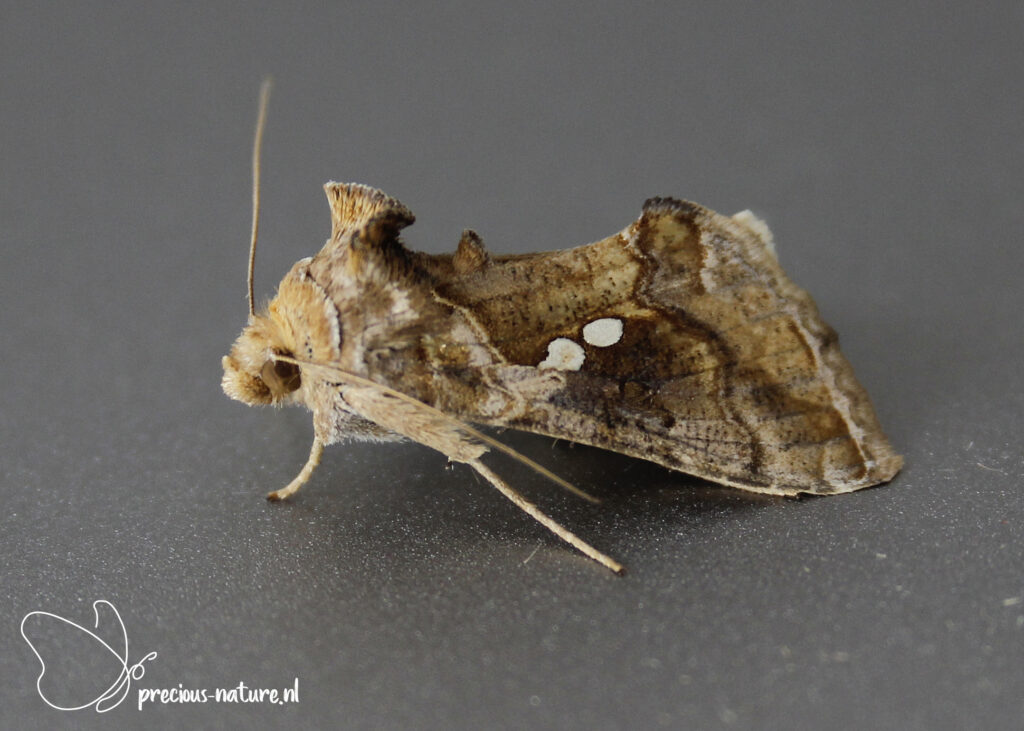 The Burnished Brass (Diachrysia chrysitis) has a grey-brown forewing with a purple tint and, when resting, is worn as a roof above the abdomen. Striking are the wide metal-green bands at the base of the wing and the costal area. These bands have a nice shine. On the top of the chest piece is an orange crest with a second crest behind it. It flies in two, and sometimes three, generations from May to October and the wingspan is 32-38mm. Host plant: Nettle, White Dead-nettle, Wild Marjoram, and Spear Thistle. Dutch name: Koperuil. Frisian name: Koperûltsje. 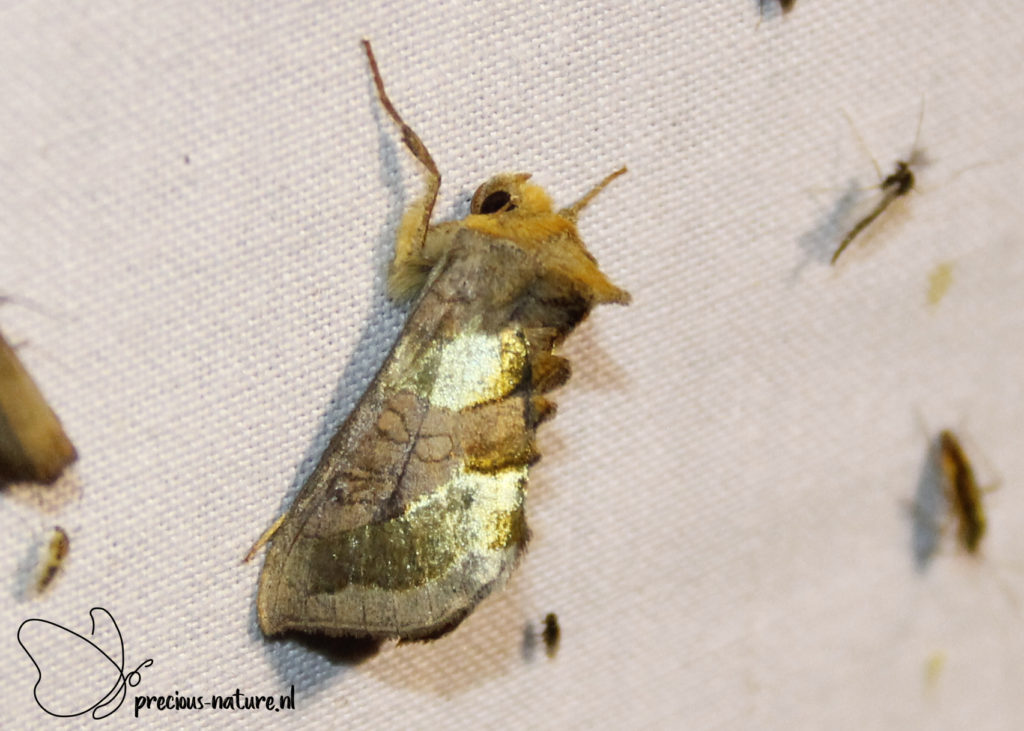 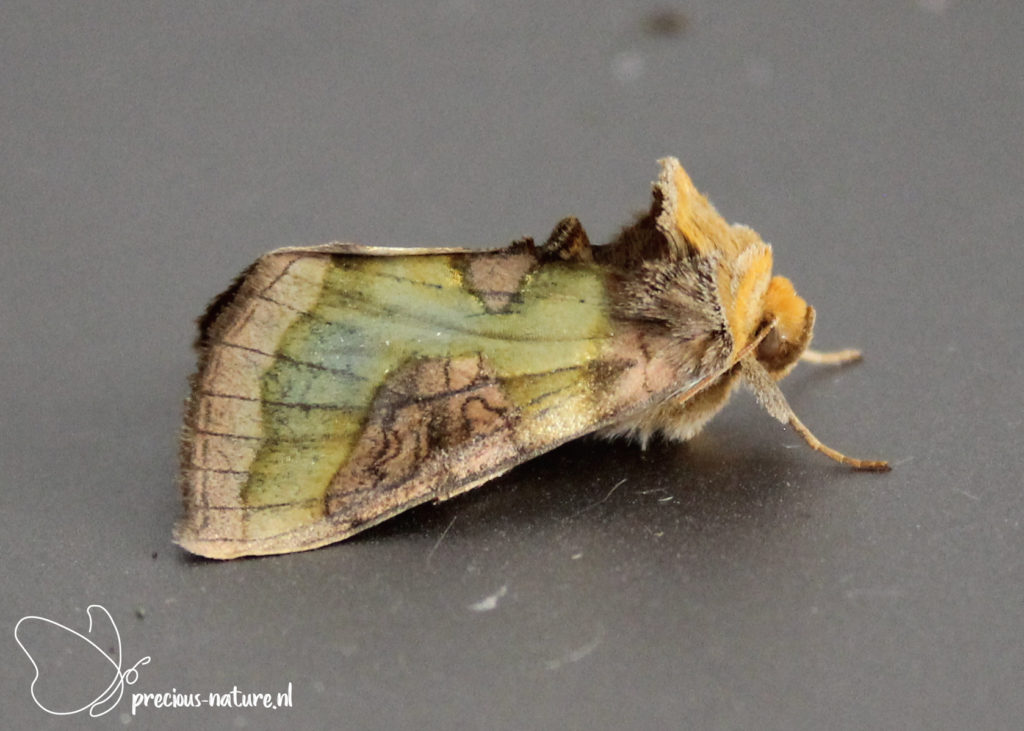 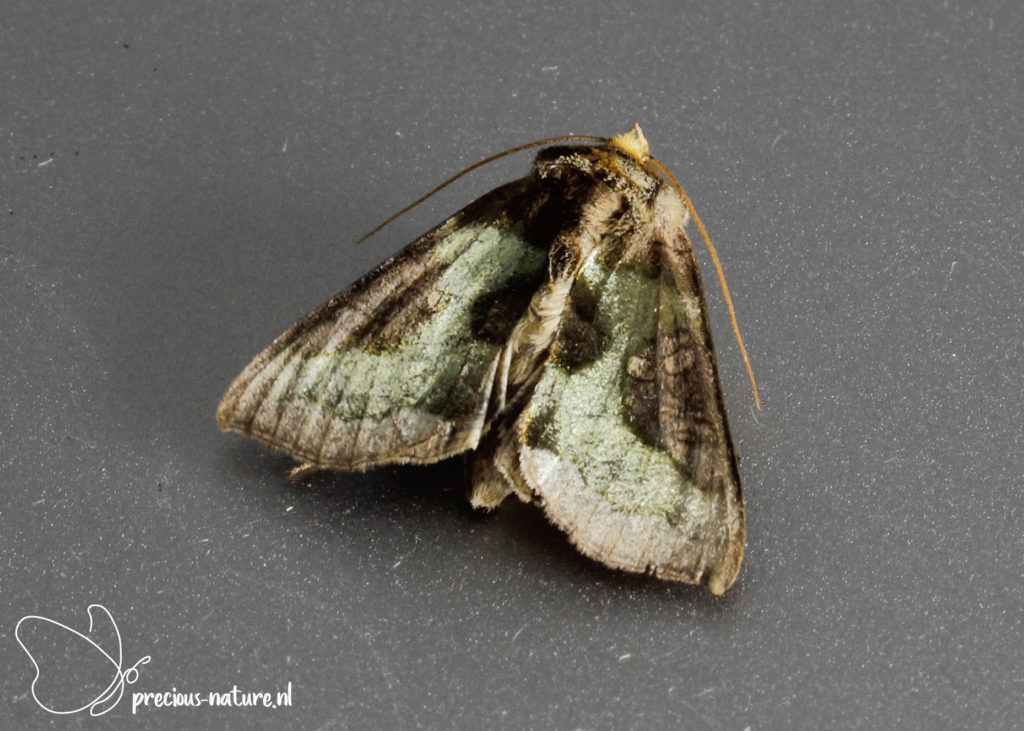 Like its related species, the Dewick’s Plusia (Macdunnoughia confusa) holds its wings up in a roof-like manner when at rest. There is a prominent crest on the top of the thorax and a small indentation further back. The constricted, never bisected, white spot on the front wing is connected with a thin straight white line that forms part of the inner transverse line, forming a distinctive white mark that extends up to the dorsum. The midfield has a warm bronze or orange-brown color on the inside of this white spot. The rest of the wing is fairly evenly greyish brown or grey, sometimes with a purple tint. The flying period is in three generations from April to October and the wingspan is 30-38mm. Host plant: Nettle, Dead Nettle, and Chamomile. Dutch name: Getekende gamma-uil. Frisian name: – 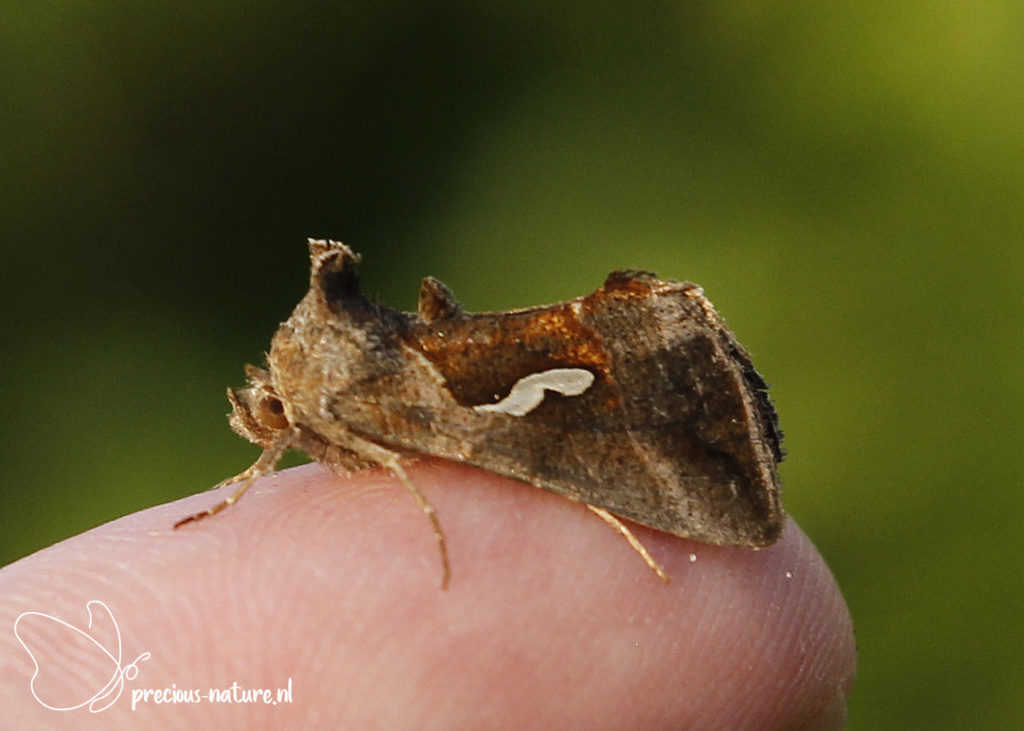 A beautiful appearance in the moth trap was the Gold Spot (Plusia festucae). This gold-colored owlet moth with a striking upright crest is very similar to the Lemke’s Gold Spot (Plusia putnami), but is still easy to distinguish. Near the apex is a white spot that is divided into four pieces by brown veins. It is the inner white spot that is needed to discover the difference between the two. At the Gold Spot, this white spot slants, with a point towards the midfield. The white spot ends almost straight for the Lemke’s Gold Spot. Most notable are the two silver-colored spots in the center of the forewing. These spots are variable in shape. The spot closest to the dorsum is always smaller and elliptical or drip-shaped. The flight period is from May to October in two generations and the wingspan is 34-46mm. Host plant: Various plants, mainly associated with damp habitats. Dutch name: Goudvenstertje. Frisian name: Goudfinsterke. 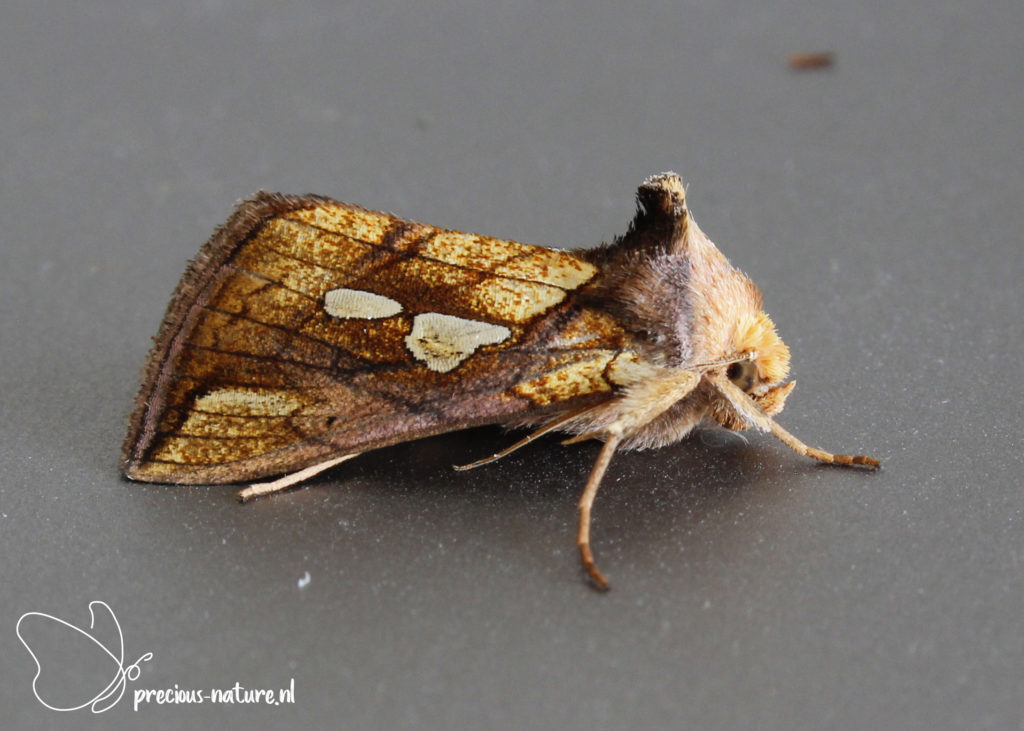 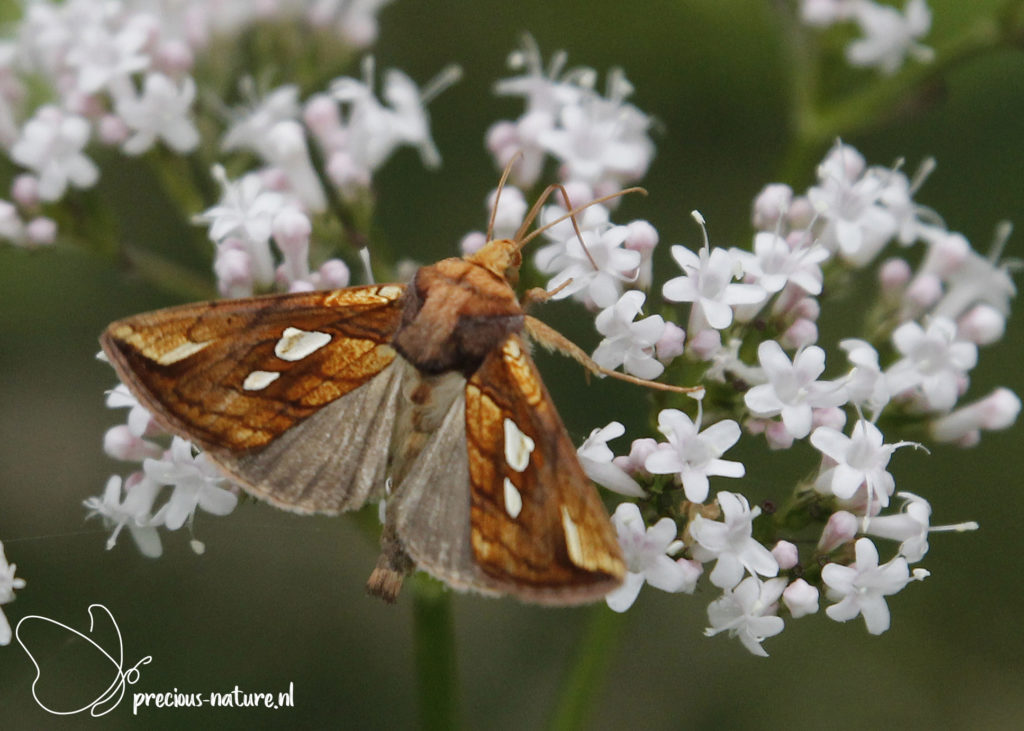