The Skippers (Hesperiidae) are small butterflies, where their name is referring to their rapid and darting flight. In some species the adults rest with the forewings and hindwings in different planes, a characteristic never found in other families. They have several other characteristics that make them considered a more primitive group of butterflies, related to some moth families. The well-known subfamilies are the Grass Skippers (Hesperiinae), Skipperlings (Heteropterinae), and the Spread-winged Skippers (Pyrginae). In the tropical region, you can find the Long-tailed Skippers (Eudaminae). Skippers have sturdy antennae with a relatively wide separation at their base and the antennal club is hooked. They are also equipped with a strikingly long coiling tongue. Some species have “tails” on the hindwing.

The Plain Longtail (Urbanus simplicius) belongs to a tribe of the Eudaminae, the Eudamini (long tails). They occur in (sub)tropical areas and often along forest roads at altitudes of up to 1500 meters. I spotted this longtail in Bogotá (Colombia) on a mountain path, used as a pilgrimage road, to the church on Montserrate. The butterfly has spread its wings in its resting state, is completely brown and has a striking “feathered” tail. Males have a costal fold enclosing scent scales on the costa of the forewing. The inner band of the hindwing underside is connected to the brown spot near the costa. At the costa, there is sometimes a small thin cream-colored stripe. The wingspan is 38-50mm. Host plant: Herbs and grasses of the legume family. Dutch name: Gewone langstaart. Frisian name: Gewoane langsturt. 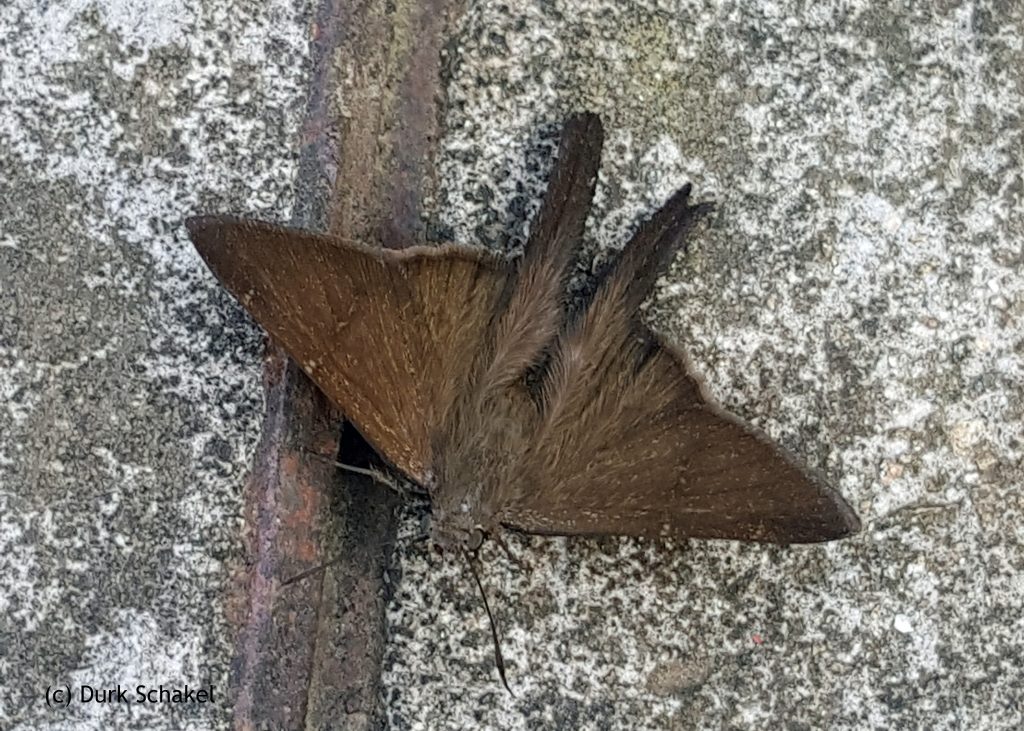 The Long-tail Skipper (Urbanus proteus) is a butterfly that is directly related to the Plain Longtail (Urbanus simplicius). This skipper occurs in the subtropical region of America. I spotted this butterfly in Medellin (Colombia). The Long-tail Skipper has cream-colored spots on both the top and underside of the wing. Most noticeable is the blue-green color on the top of the body. The difference with the Urbanus dorantes, which does not have a blue-green color but looks more like the Long-tail Skipper, is the black continuous band at the underside of the hindwing. The wingspan is 45-60mm. The antennas don’t really have a knob on the end. You can see very nicely the slightly thickened curved hook. Host plant: Herbs of the legume family, Pea, Bean, Soy. Dutch name: Langstaartdikkopje. Frisian name: Langsturtgroukopke. 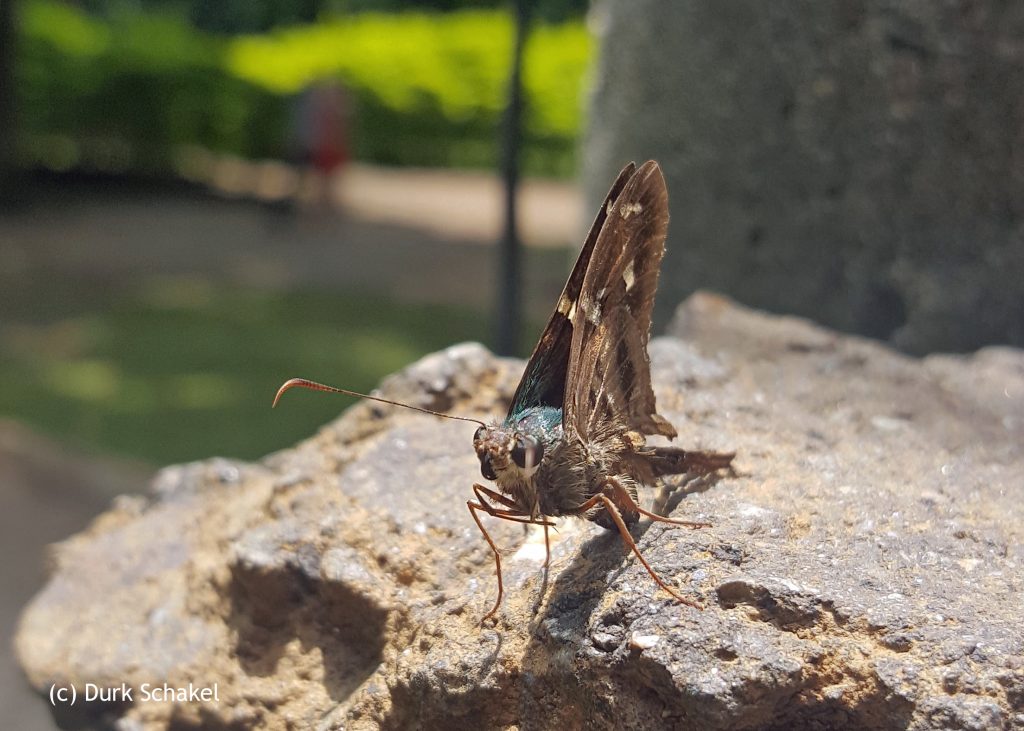 A skipper that also has white spots on the wings like the Long-tail Skipper (Urbanus proteus) is the Clouded Skipper (Lerema accasius). However, the long tail is missing. The Clouded Skipper spotted in Medellin, Columbia, has dark brown wings with the male having a dark black stripe on the top of the forewing and the female having transparent white spots. The underside of the hindwing has dark and light spots and a blue-green glow. The wingspan is 32-45mm and the flight period is all year round. Host plant: St. Augustine grass and Wooly Beard grass. Dutch name: Gevlekt dikkopje. Frisian name: – 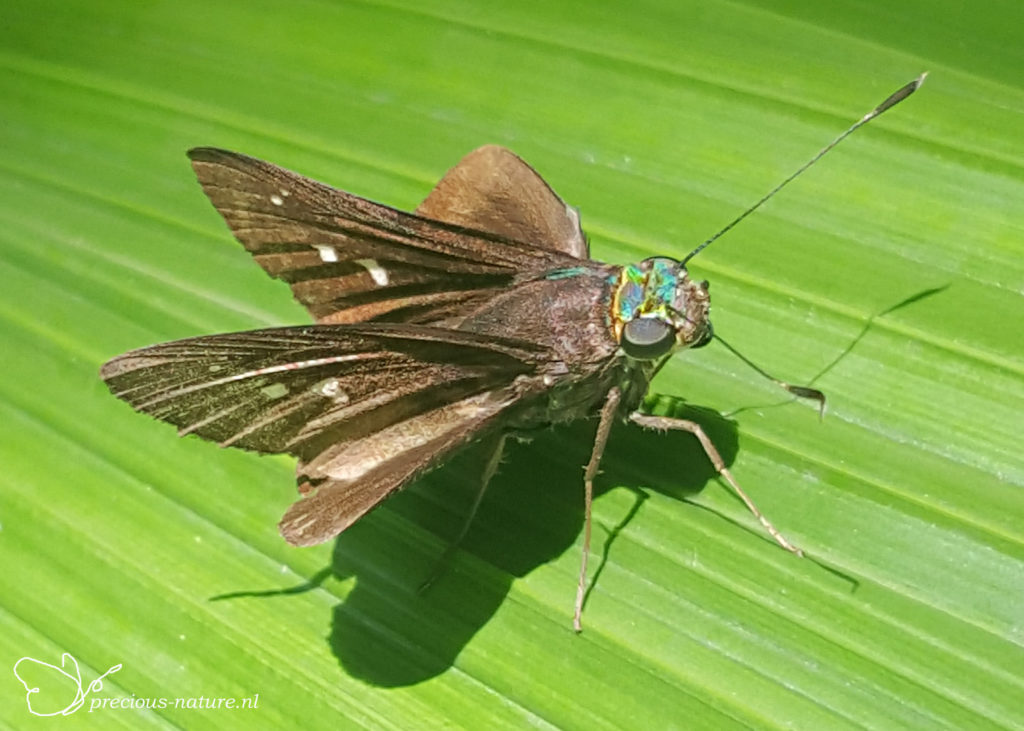 The Large Skipper (Ochlodes sylvanus) is a butterfly that flies around in one generation from early June to September. The males are most often found perching in a prominent, sunny position, awaiting passing females. The butterfly is easy to identify where the hooks on the tip of the antenna are distinctive and are not present with the Small and Essex Skipper. Males have a thick black scent line through the center of the forewing. Undersides have faint orange spots. The presence of a faint chequered pattern on both sides of the wings distinguishes this species from the Small and Essex Skipper. The wingspan is 33-35mm. Host plant: Cock’s-foot, False Brome, and Purple Moor-grass. Dutch name: Groot dikkopje. Frisian name: Foars groukopke. 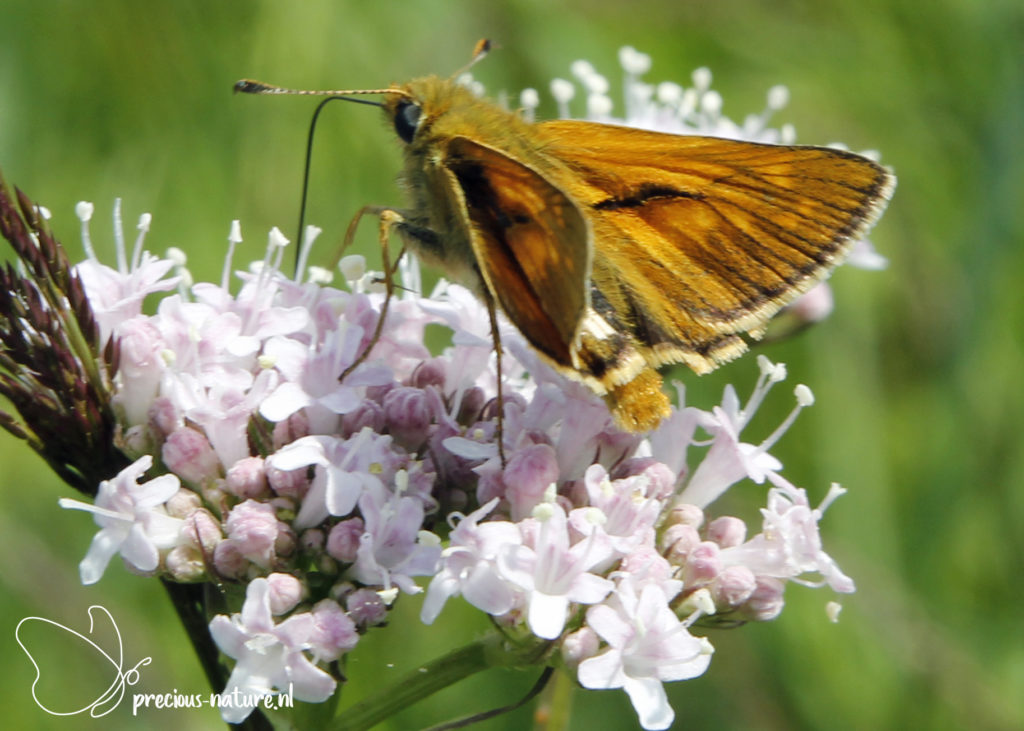 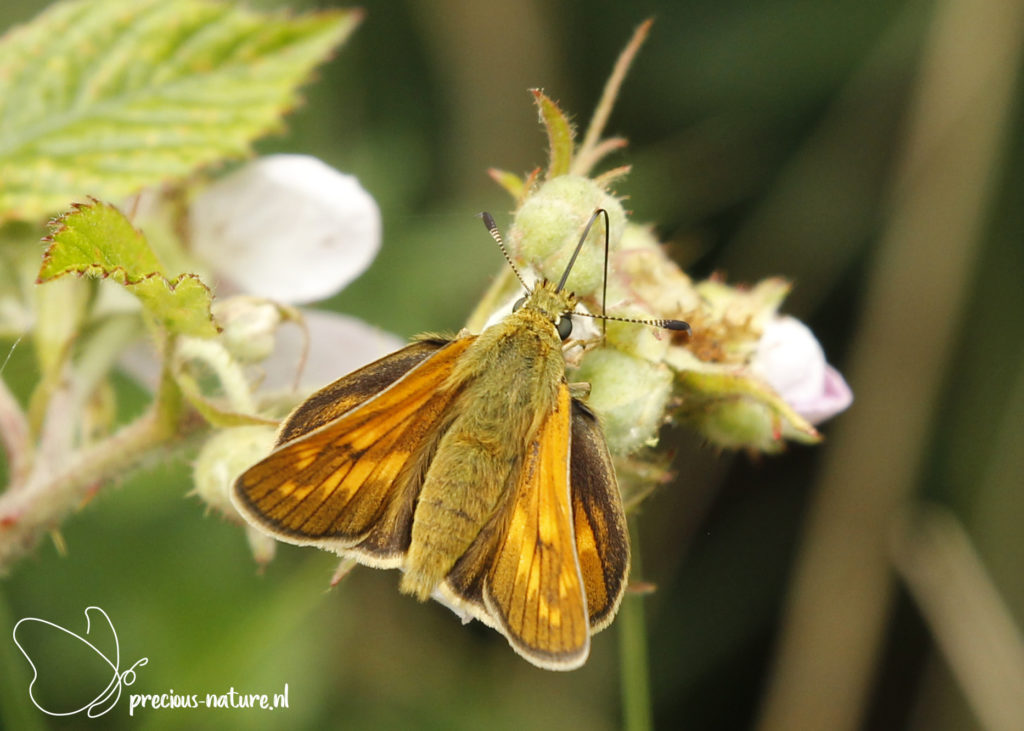 The Small Skipper (Thymelicus sylvestris) is a butterfly that flies around in one generation from May to August. The butterfly is very difficult to identify and is often confused with the Essex Skipper (Thymelicus lineola). The tips of the antenna are orange (best-viewed-head-on) and the black edge of the wings is sharply marked. Males have a thin black line through the center of the forewing. They have bright orange-brown wings held with the forewings angled above the hindwings. A closer examination shows many individuals nectaring or basking with their wings held in the half-open posture which is distinctive for skipper butterflies. The wingspan is 30mm. Host plant: Meadow Foxtail, Timothy grass, False Brome, and Cock’s-foot. Dutch name: Geelsprietdikkopje. Frisian name: Gielteistergroukopke. 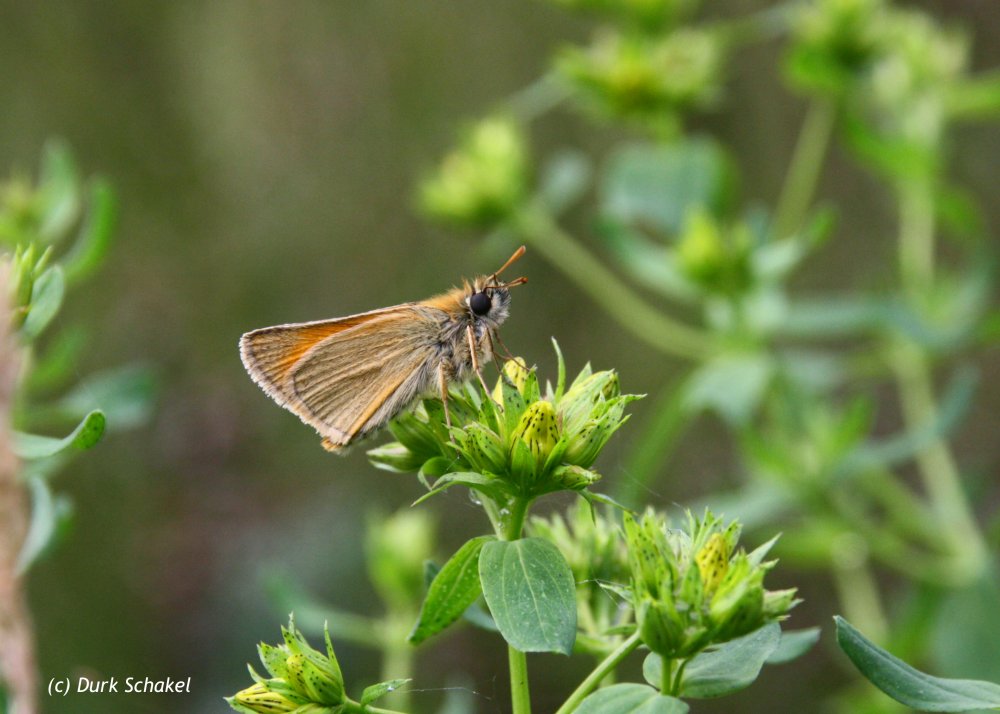 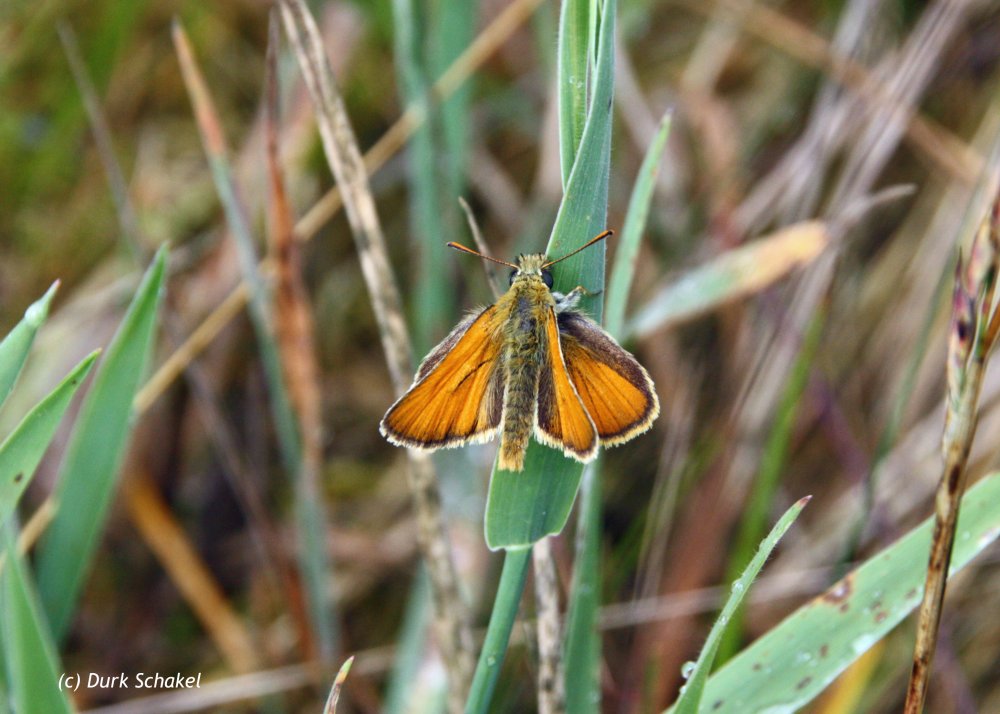 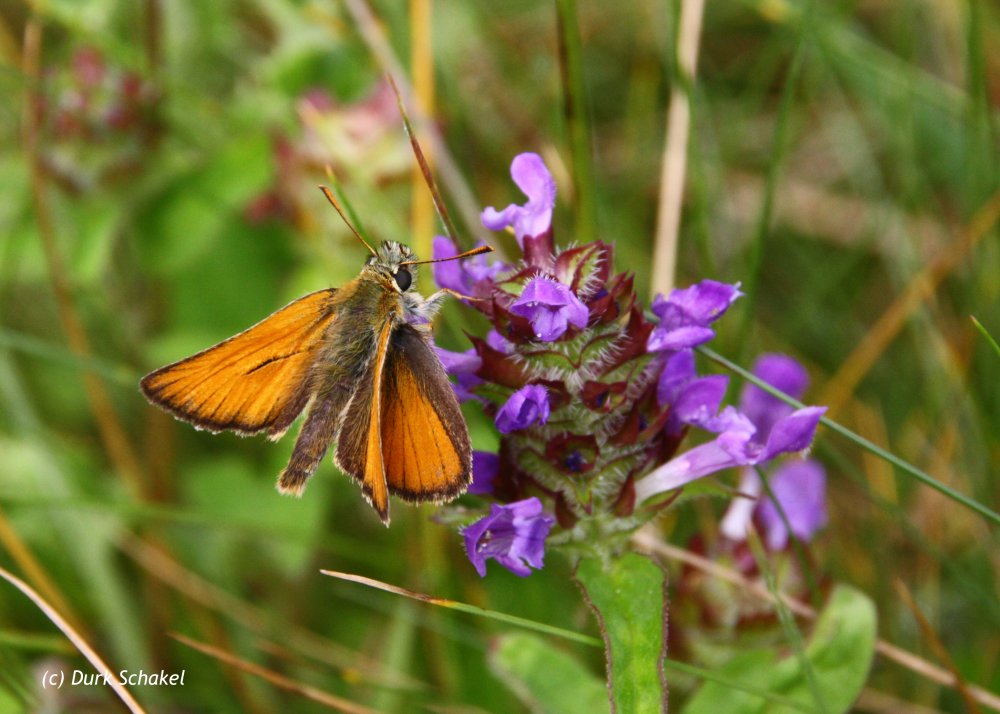 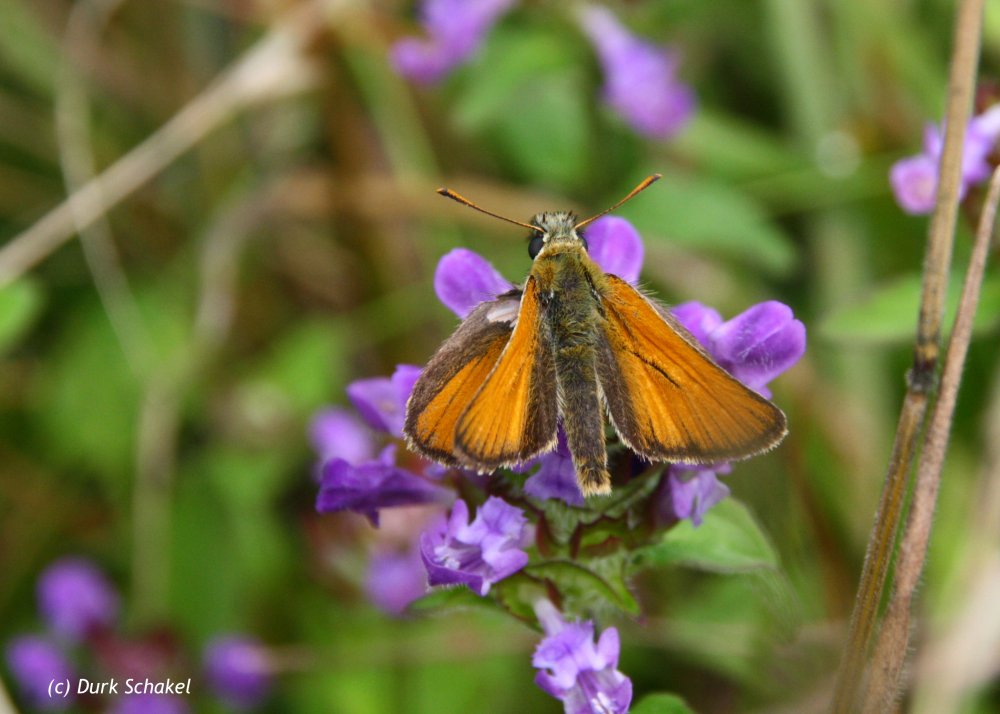 The Essex Skipper (Thymelicus lineola) is a butterfly that flies in one generation from late June to late August. The butterfly is fairly easy to identify, but attention should be paid to similar skippers. The tip of the antenna tip is black and the black border on the wings can be seen running along the veins. The orange-brown wings are held with the forewings angled above the hindwings. Males have a thin black line through the center of the forewing, but this scent brand is shorter as for the Small Skipper (Thymelicus sylvestris) and doesn’t angle to the edge of the forewing. The wingspan is 27-30mm. Host plant: Cock’s-foot, Timothy, and Creeping Soft-grass. Dutch name: Zwartsprietdikkopje. Frisian name: Swartteistergroukopke. 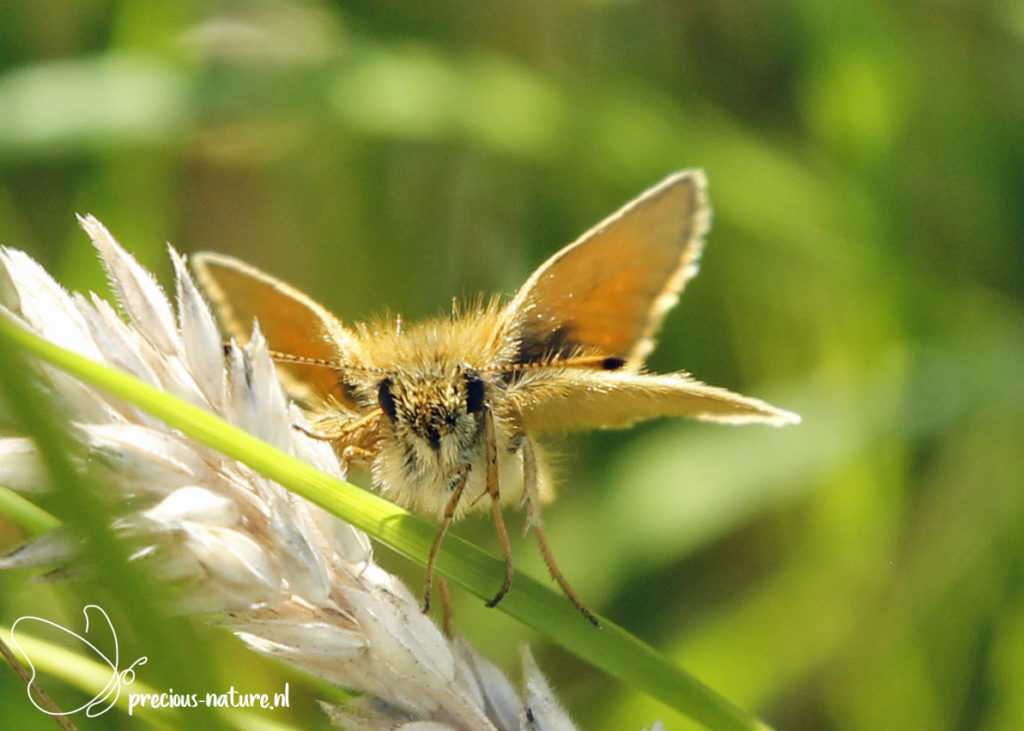 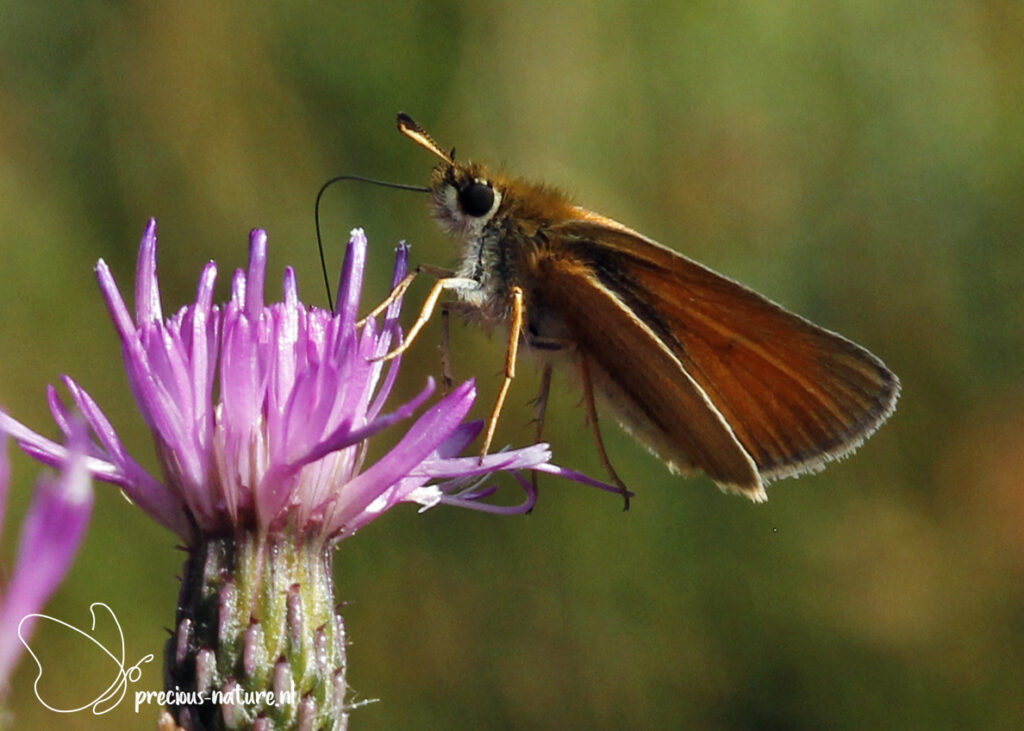 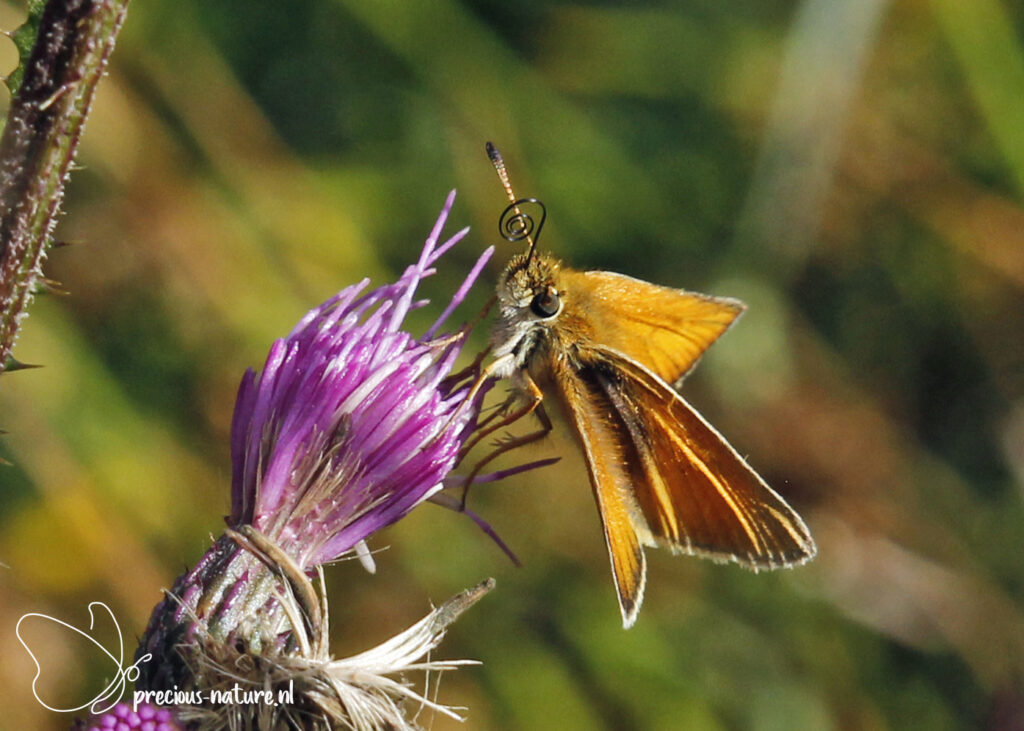