Bryophilinae is a subfamily of the Owlet Moths (Noctuidae).

The Marbled Beauty (Bryophila domestica) has a wing that has light grey to white as a base color. On the wing, there are green, greyish-green, and sometimes pale yellow spots. The transverse lines and the kidney mark are clearly visible. It can be distinguished from the Marbled Green (Nyctobrya muralis) by the transverse lines that run to the inner edge, which is not the case with the Marbled Green. The Marbled Beauty often rests on walls or roofs during the day and flies in one generation from June to September. The wingspan is 20-25mm. Host plant: Lichens on stones, roofs, walls, and trees. Dutch name: Lichte korstmosuil. Frisian name: – 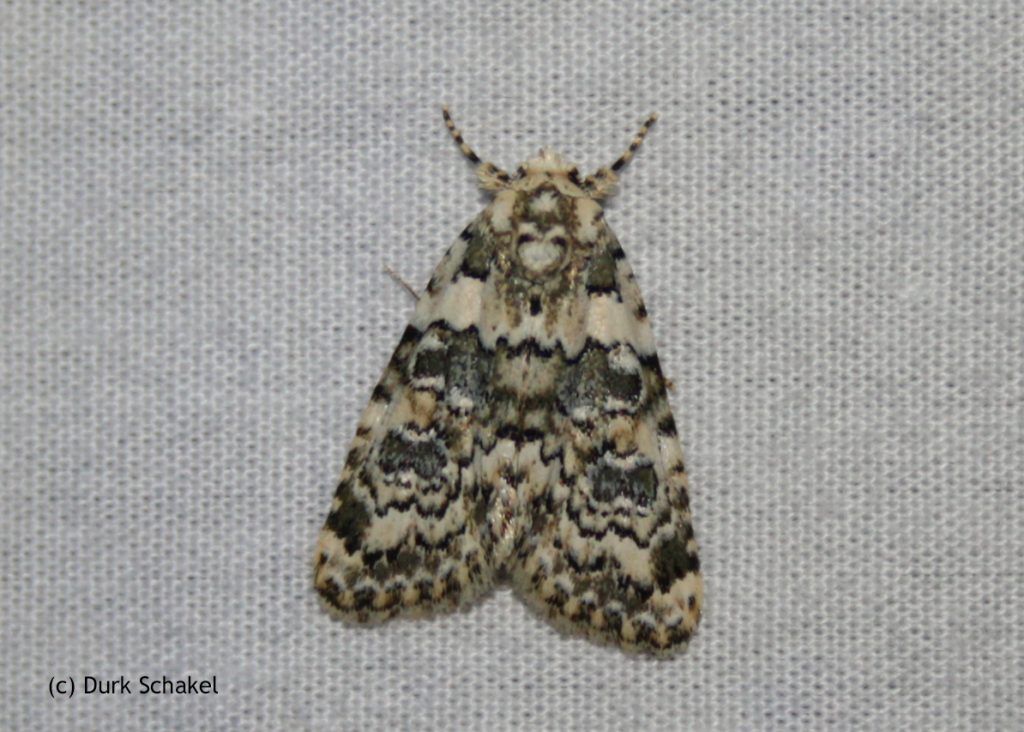 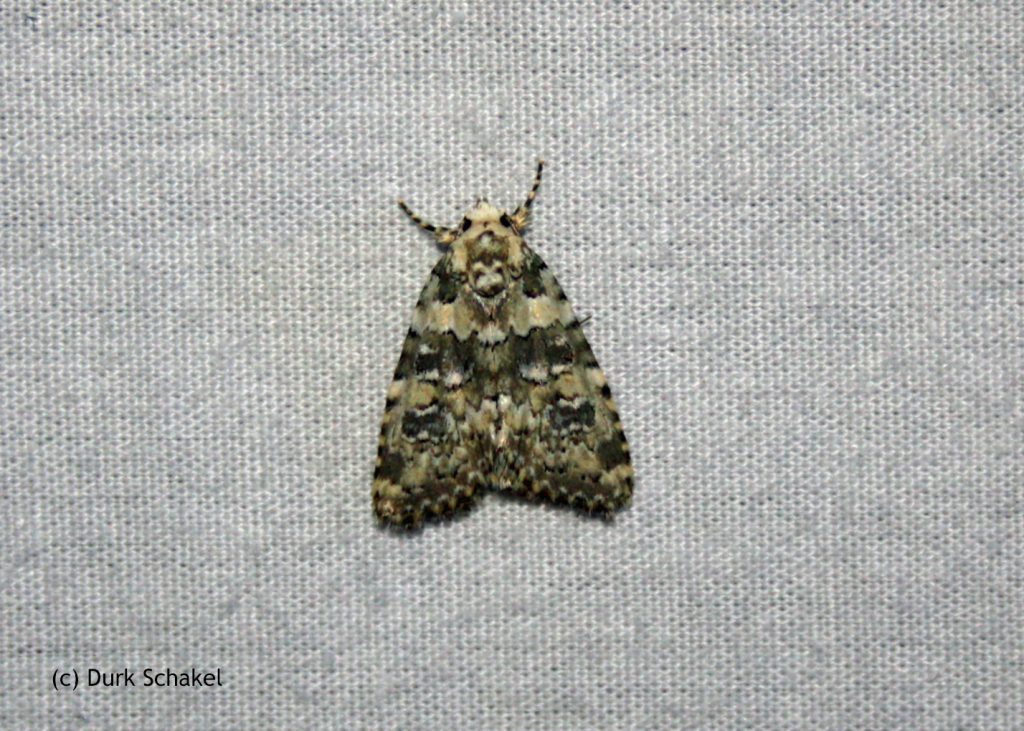 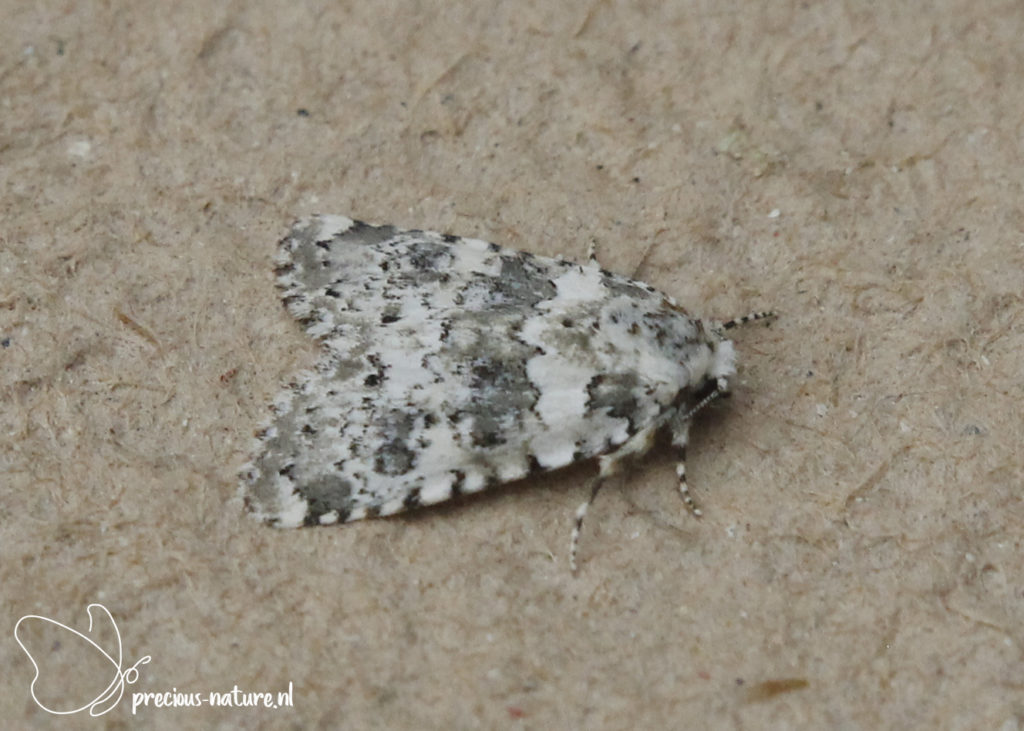 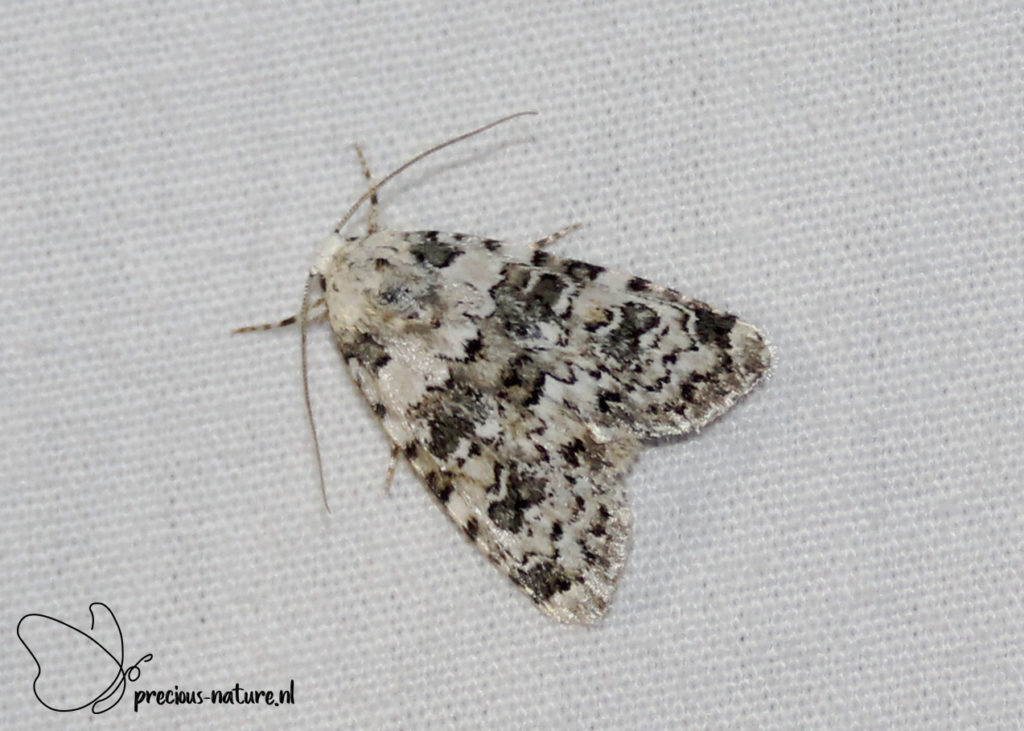 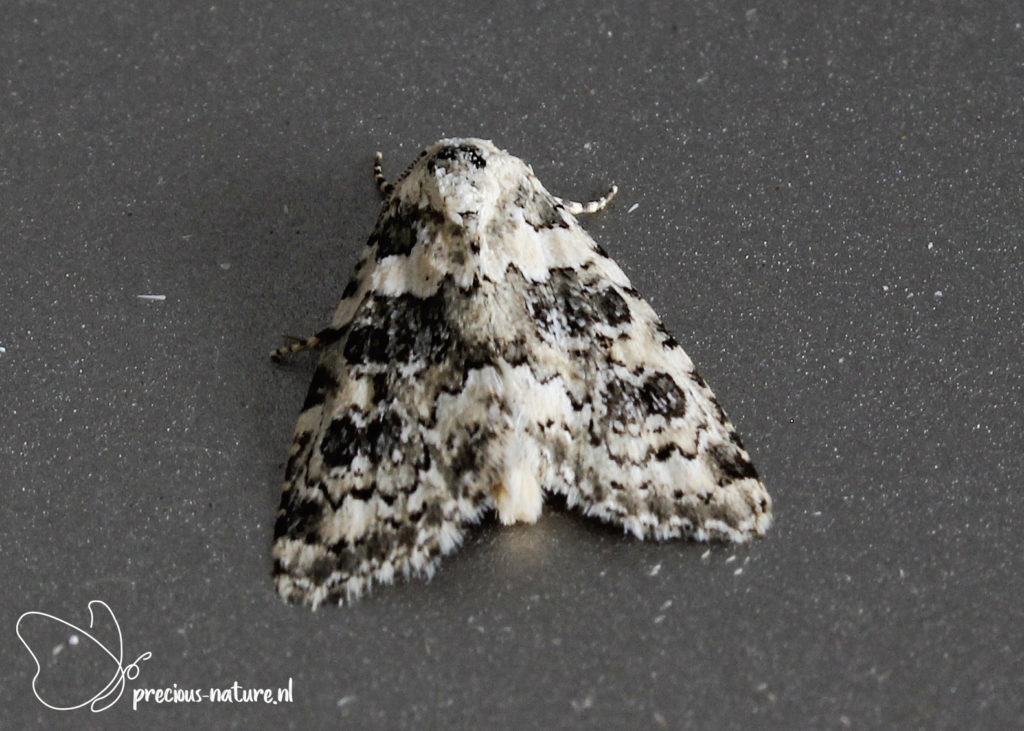 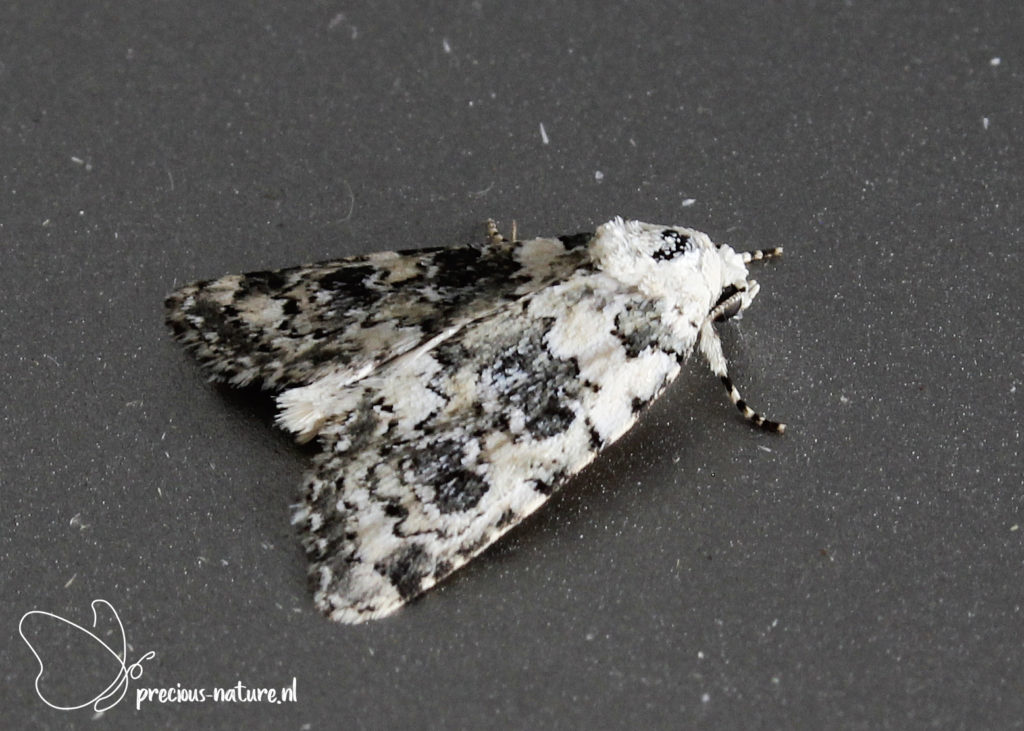 A small owl whose ground color can have different shades of green is the Tree-lichen Beauty (Cryphia algae). There are variants with a dark green color, but also with a mint green color. The wing base is green as in the marginal area, especially within the lighter wavy line. The median line is dark with sometimes a light area containing the large kidney mark. In particular, the area along the outside of the ante-median line and a strip transversely thereto along the trailing edge of the wing are colored dark. The difference from the Marbled Green (Nyctobrya muralis) is the absence of striking dark spots along the leading edge of the forewing. The wingspan is 24-30mm and the flight period is in one generation from July to September. Host plant: lichens, especially on trees. Dutch name: Donkergroene korstmosuil. Frisian name: – 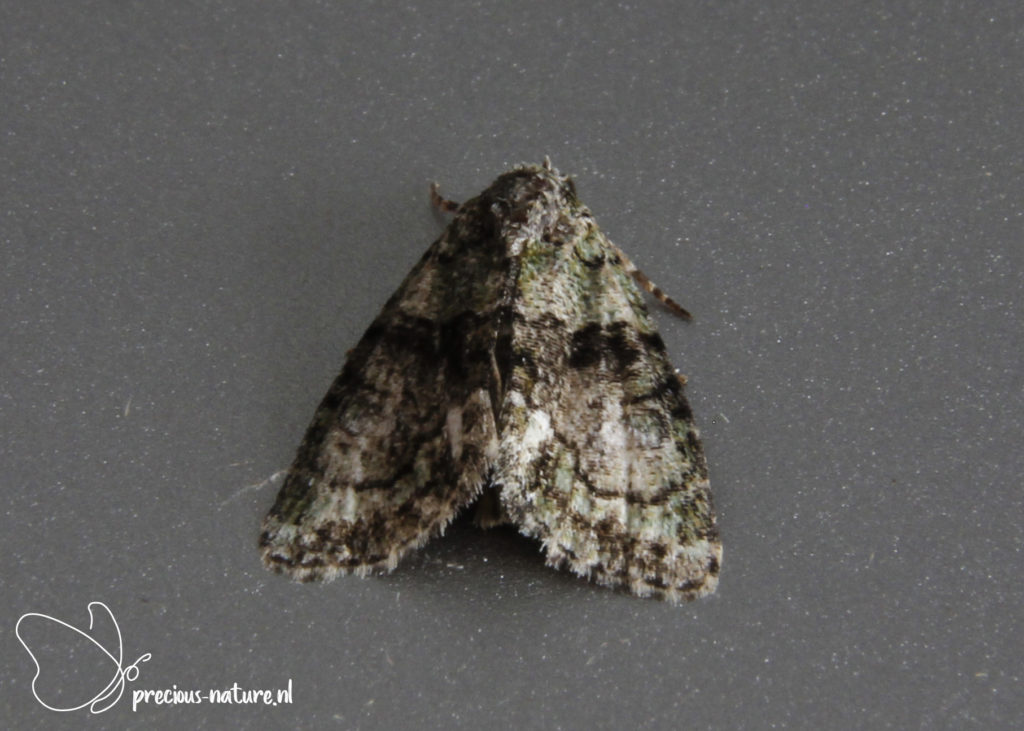 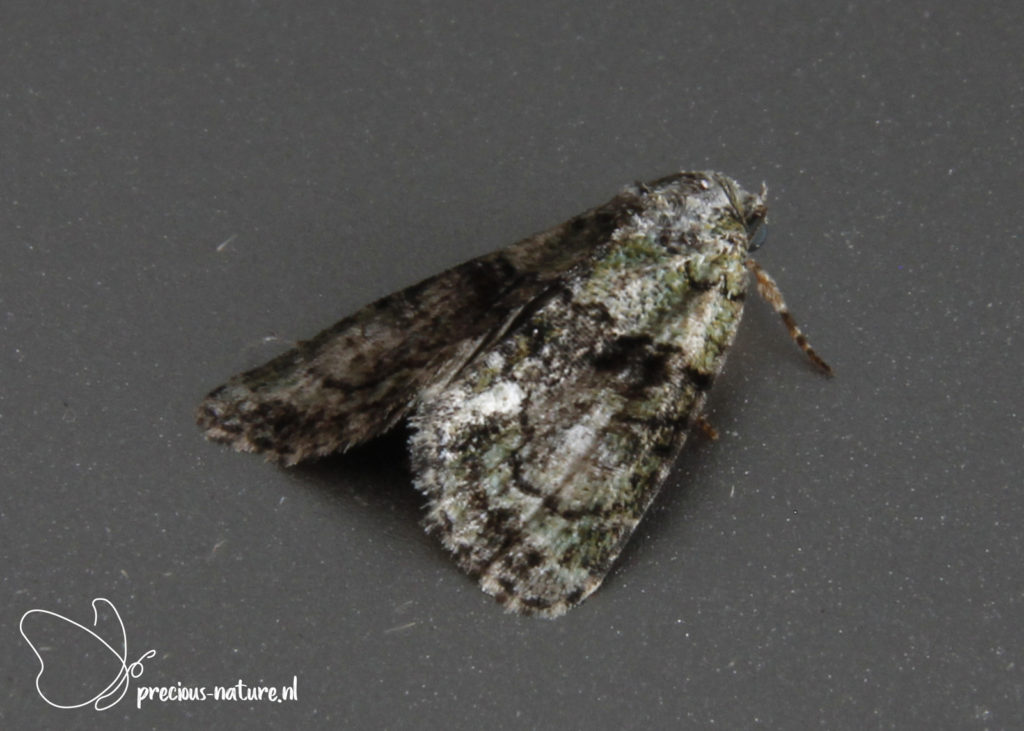 The Marbled Green (Nyctobrya muralis) can occur in different shades of color. The color of the wings varies from greenish-white to olive-green and contains a variable pattern of green or sometimes orange-brown spots. The ante-median line does not extend to the inner edge of the wing as does the first transverse line. The latter bends in the direction of the inner transverse line so that between these lines a light spot in the form of a three-leaf clover becomes visible. The black cross lines are generally clearly visible. The flying period is in one generation from June to September and the wingspan is 27-34mm. Host plant: Lichens on stones, walls, roofs, and trees. Dutch name: Groene korstmosuil. Frisian name: –