Acentropinae is a subfamily of the Grass Moths (Crambidae). The species of this family are mainly found in wetlands or aquatic systems. The larvae always feed on aquatic plants, possibly in the roots underwater. A proposal has been made to change the name of the subfamily to Nymphulinae, but this has not been accepted.

A grass moth of which not much is known and which, given the habits of the females, you would not immediately expect in my backyard, is the Water Veneer (Acentria ephemerella). There are two forms of the female, one with wings and one with poorly developed or almost no wings. The females with wings fly just above the water surface and the females without wings swim on the water surface where in both cases the male can provide fertilization. The females then dive underwater to deposit their eggs on the host plant. The wings, with a rounded apex and sloping costa, are white-yellow to greyish with dark veins. The fringes are quite long and white. The flying period is probably in two generations from May to October and the wingspan is 11-13mm. The larvae are completely aquatic and have been found at depths of up to two meters. Host plant: Waterweed, and Pondweed. Dutch name: Duikermot. Frisian name: – 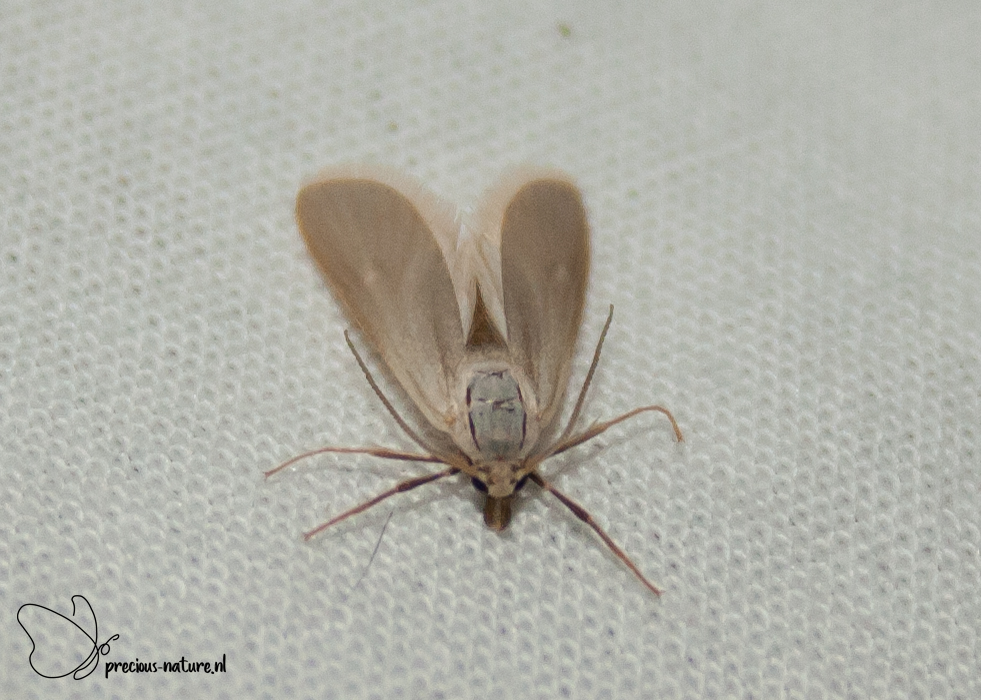 The Small China-mark (Cataclysta lemnata) is a small moth that can often be found in stagnant or hardly moving water. I also caught him at home on the white sheet because he simply approaches light. The male has a white forewing and the female is more light brown. Both have a distinctive black costa on the hindwing with bluish dots. The flight time in one generation is from June to September and the wingspan is 18-24mm. The larvae are semi-aquatic. They build floating cases from parts of the host plant. Host plant: Duckweed. Dutch name: Kroosvlinder. Frisian name: – 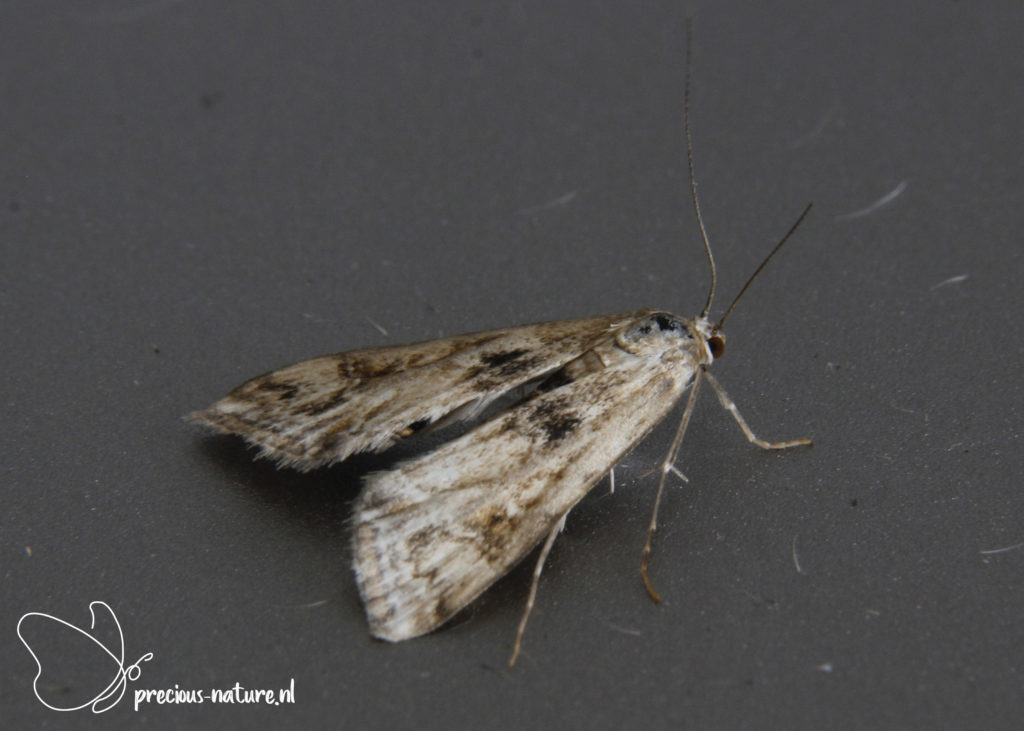 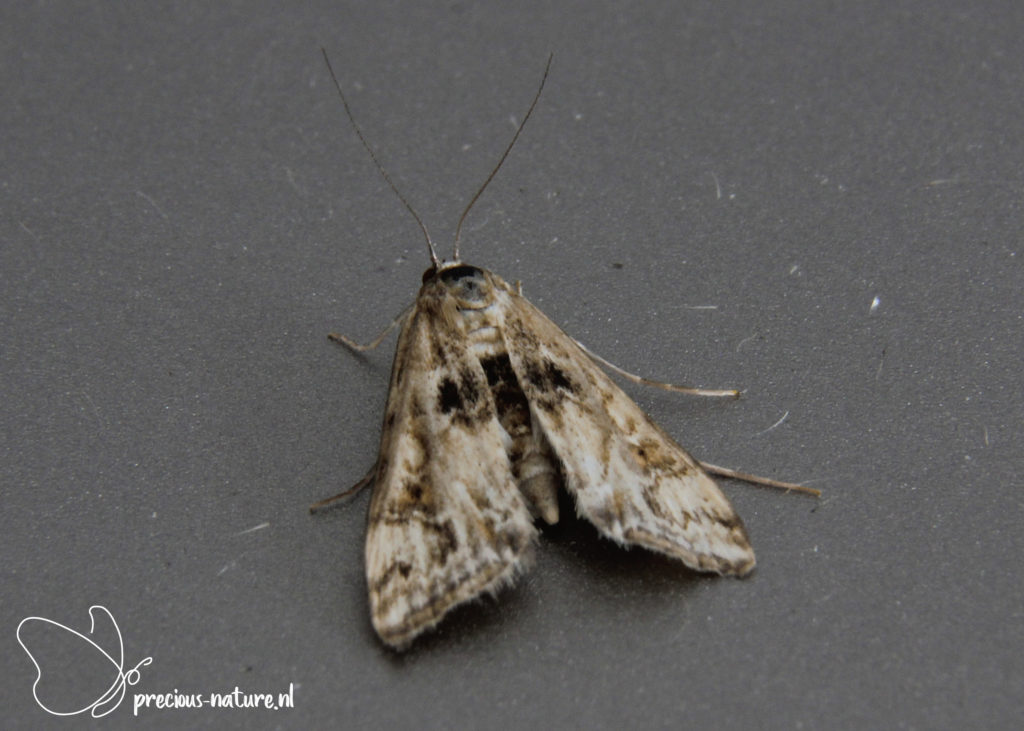 The Brown China-mark (Elophila nymphaeata) has white wings with markings of brown circles. This species is very variable, some varieties are quite dark and look dull while others have a nice pattern of white patches and streaks. The Brown China-mark looks much browner than its counterpart, the Beautiful China-mark (Nymphula nitidulata). The Brown China-mark is mainly found in grasses near lakes, ponds, or ditches. It flies in one generation from June to September and has a wingspan of 22-30mm. The larvae are completely aquatic, bore into a leaf, and live in a floating case of two parts of leaves. Host plant: Pondweed, Frogbit, and Bur-reed. Dutch name: Waterleliemot. Frisian name: – 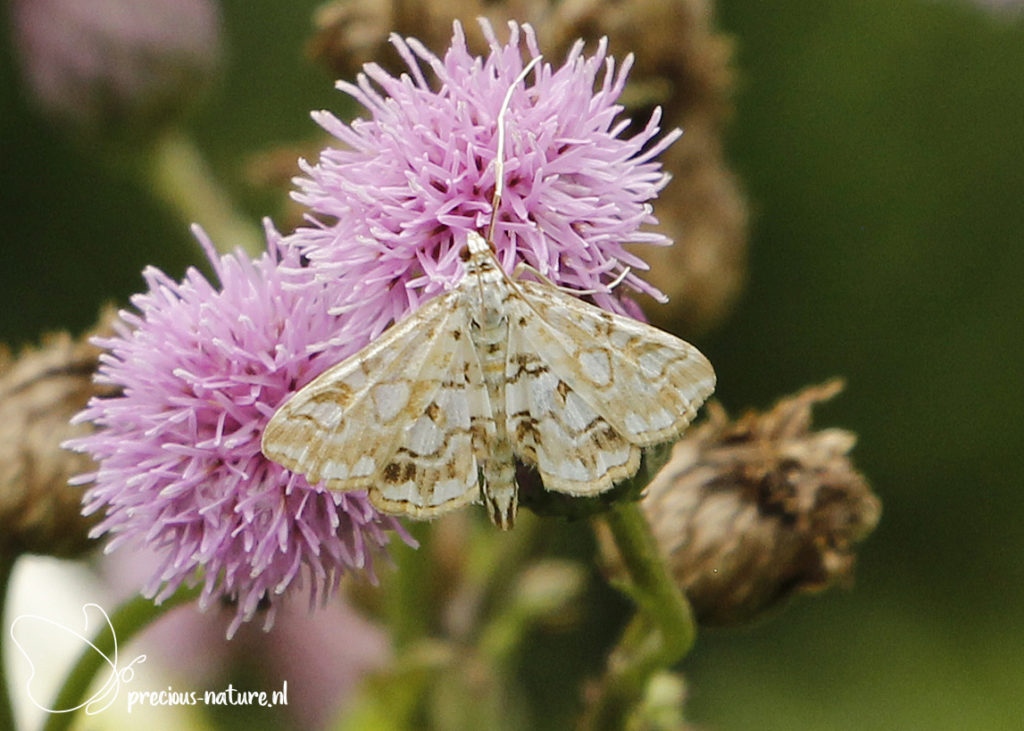 During a moth session in a wetland environment, I came across the Beautiful China-mark (Nymphula nitidulata). The forewing is shiny white with brown markings. The intensity of the markings varies, sometimes faintly. In the center of the wing are three large, more or less round, white spots. The hindwing is also white with a narrow brown cross band at 1/3 and a second narrow cross band closer to the termen. You can see a narrow yellow band along the termen at both the front and hindwing. The flying period in one generation is from May to the beginning of September and the wingspan is 20-25mm. The larvae feed just below the surface within spun leaves or in the stem. Host plant: Bur-reed. Dutch name: Egelskopmot. Frisian name: – 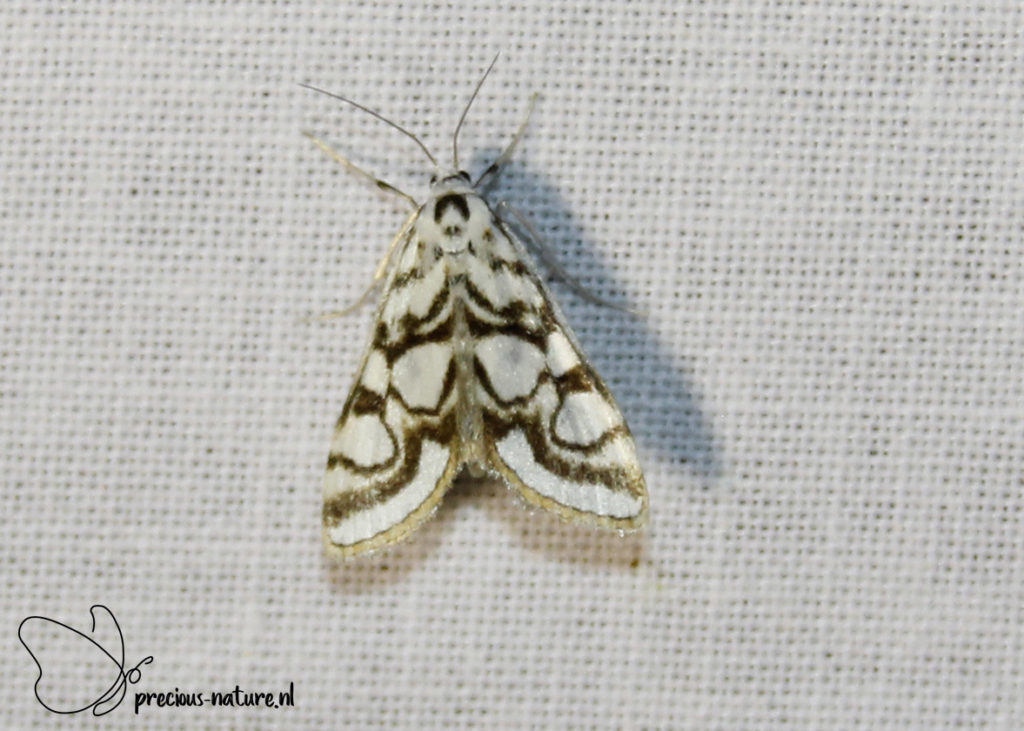 A species that you often encounter in wetlands is the Ringed China-mark (Parapoynx stratiotata). The forewing of the male is whitish with a yellow-brown shading. On 2/3, a faded brown cross band can be seen curving around a dark ringed white spot. The male’s hindwing is white with a broken dark band. The female is usually larger than the male and has longer wings. The female’s forewing is shaded orange-brown, brown, or dark brown with the transverse bands less noticeable. The dark ringed white spot is often still visible. The hindwing is similar to that of the male, but with more brown shading. The flying period in one generation is from May to October and the wingspan is 20-24mm for the male and 28-30mm for the female. The larvae feed in an open web in spun leaves. Host plant: Canadian Waterweed and Hornwort. Dutch name: Krabbenscheermot. Frisian name: – 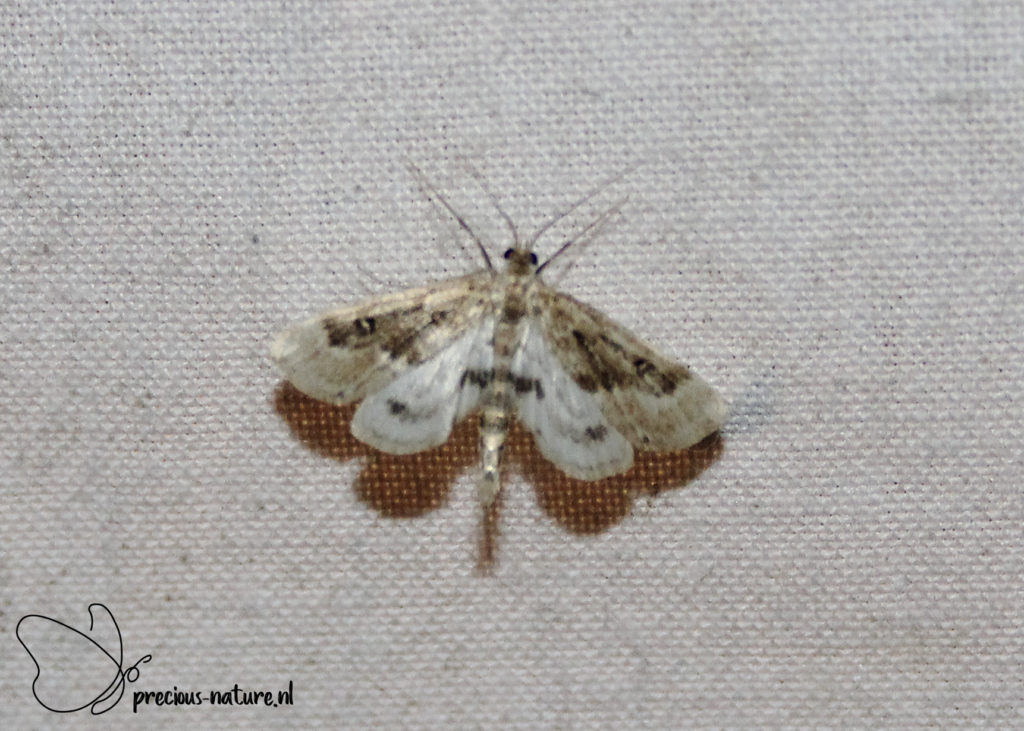 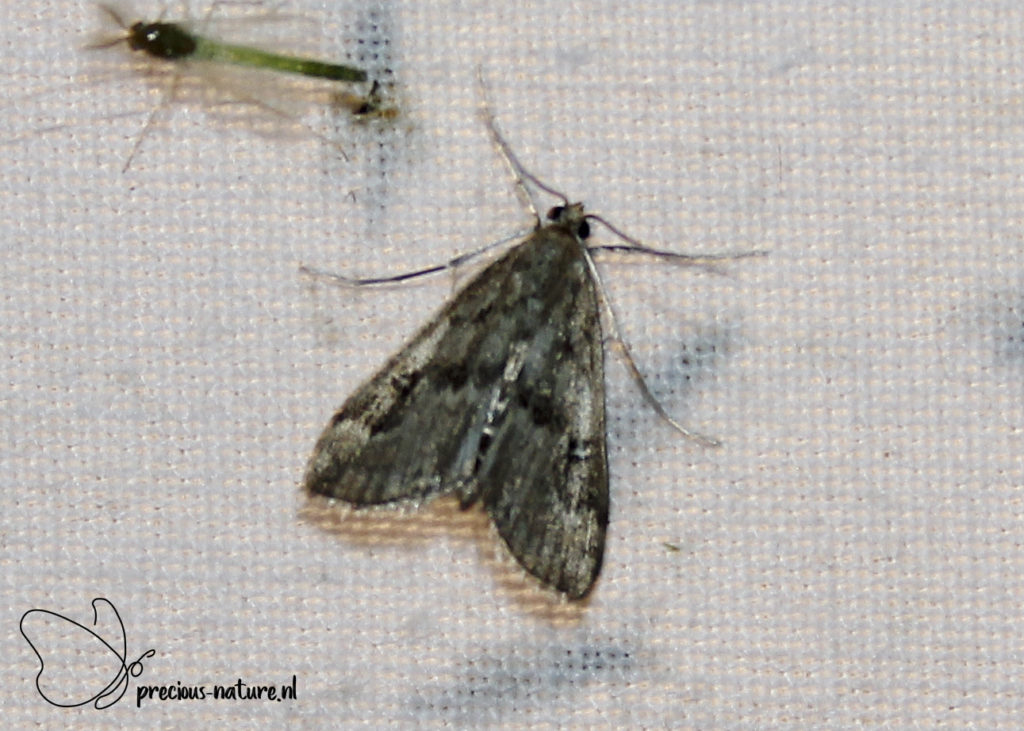 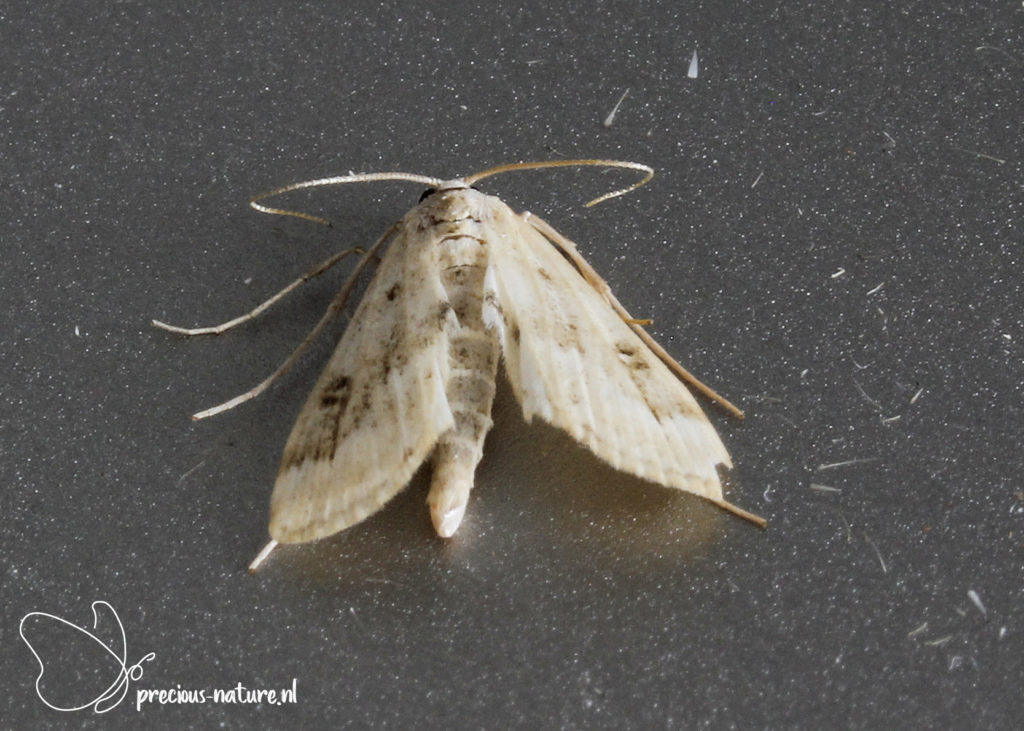