Pyraustinae are a subfamily of the Grass Moths (Crambidae) and comprise approximately 1,400 species worldwide, most of which occur in the tropics. Previously this family was seen as a subfamily of the snout moths (Pyralidae). They have a slender body, wide wings and the abdomen often extends beyond the hindwings. Many species have larvae that bore into the stem or fruit of plants.

It took quite a while before I was able to identify the Ochreous Pearl (Anania crocealis). Eventually, I bought the right literature that clearly stated it. Taking the bad sharpness of the photo and the position of the micro-moth did not help either. The basic color of the forewing is light yellow, sometimes darker specimens, with two brownish transverse lines that meander over the wing. A dark point can still be seen on some specimens. This grass moth flies in one generation from the end of May to September and has a wingspan of 22-25mm. The larvae feed in the center of a shoot. Host plant: Common Fleabane. Dutch name: Gegolfde lichtmot. Frisian name: – The Small Magpie (Anania hortulata) is a very striking appearance and one of the larger species within the grass moth group. The top of the thorax is mostly yellow and the rest of the body consists of alternating yellow and brown bands. The ground color of the wing is white with a band of brown spots on the ends of both wings. Near the apex of the wings is a second row of brown spots. It flies in one generation from June to August and has a wingspan of 24-28mm. The larvae can be found in a spun or rolled leaf before developing in a silk cocoon in a hollow stem or under the bark. Host plant: Nettle. Dutch name: Bonte brandnetelmot. Frisian name: – 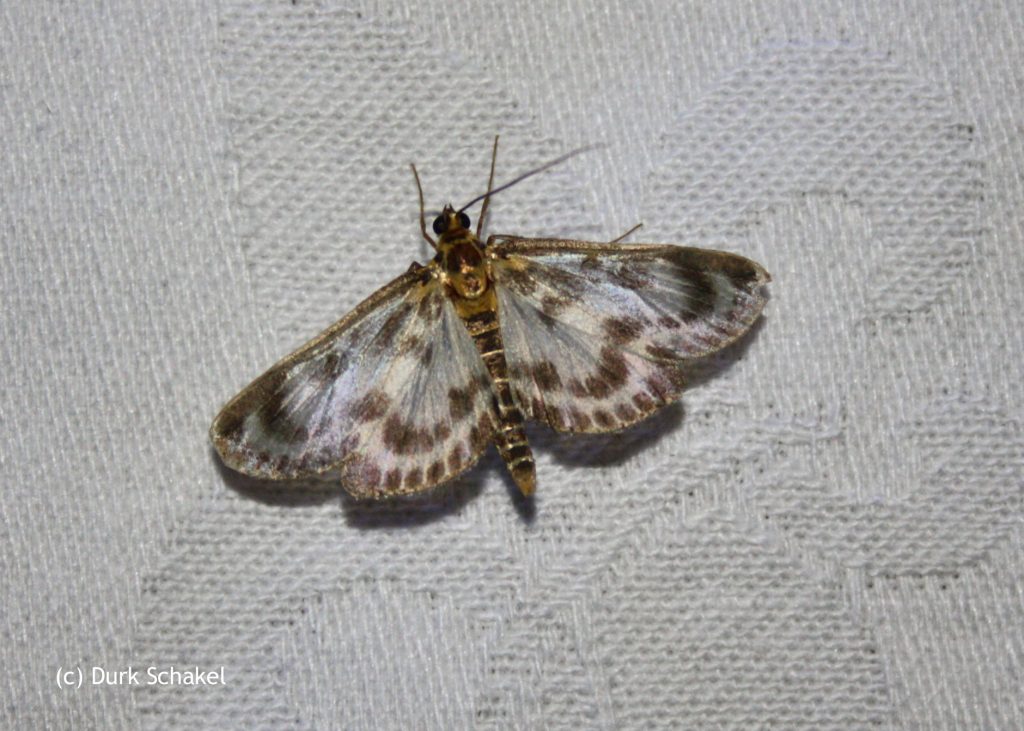 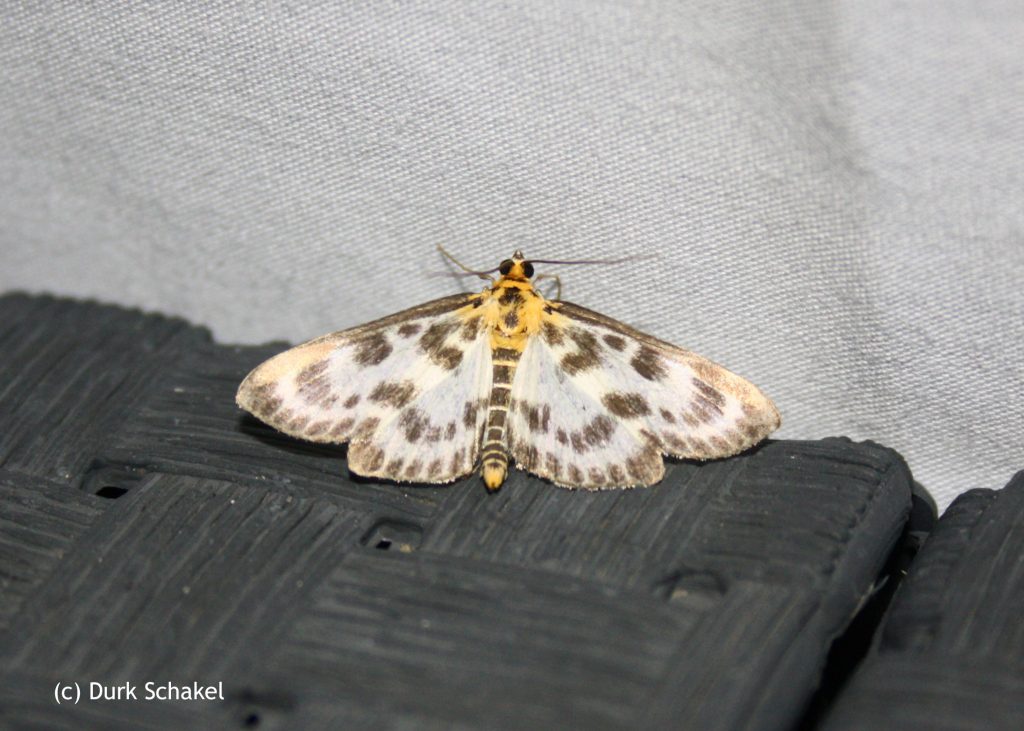 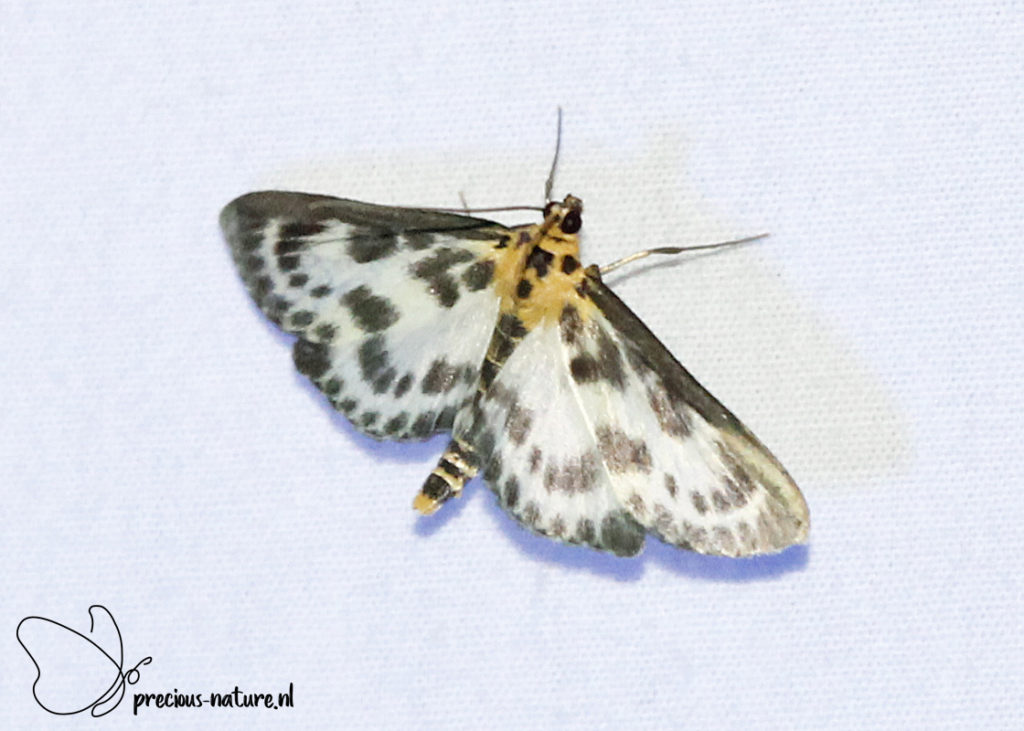 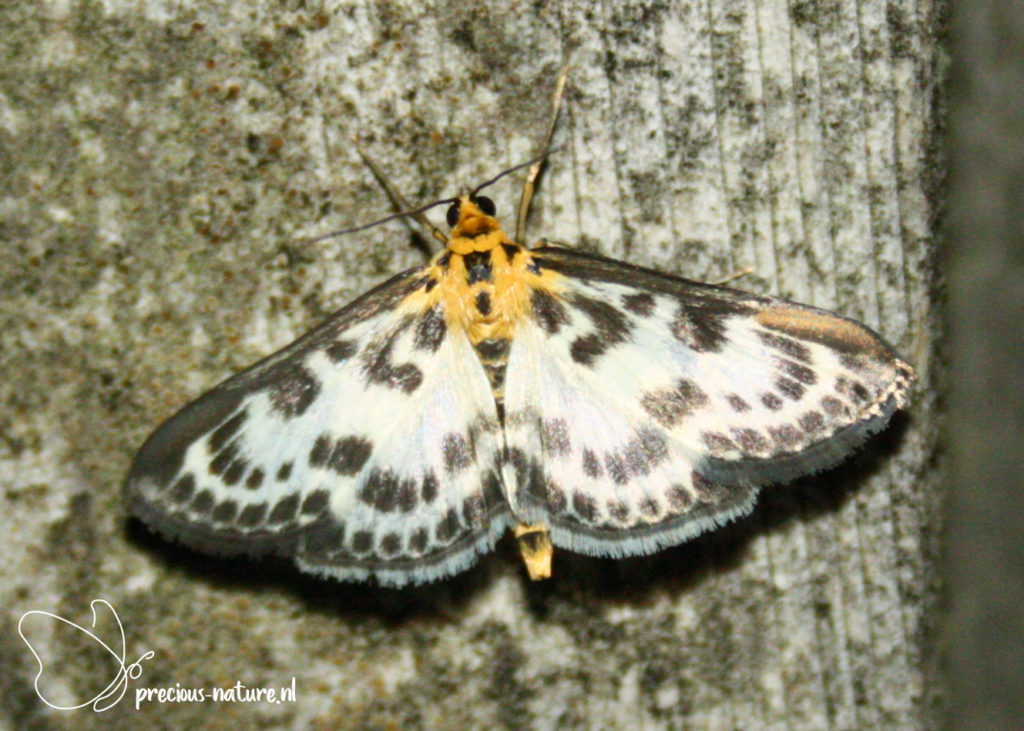 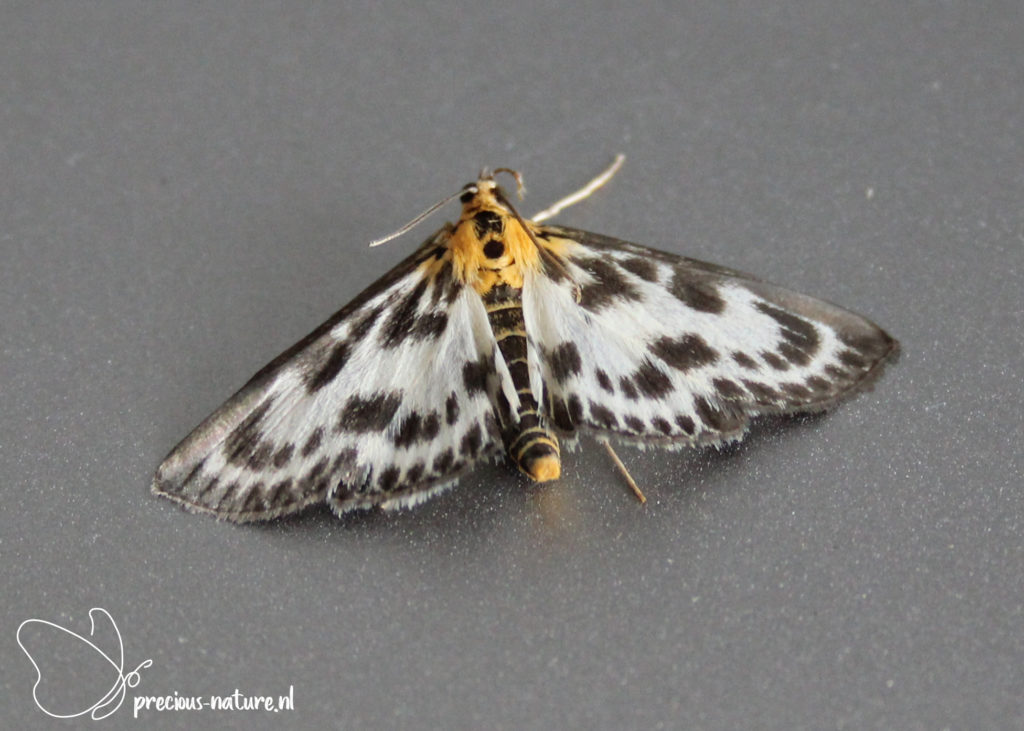 The Spotted Magpie (Anania coronata) is an easily recognizable micro-moth. The wings are dark brown with a few large off-white spots. There are a number of smaller white spots on the outside of those spots. The flight time in one generation is from June to August and it is active at night. The wingspan is 22-26mm and the larvae feed on silk on the underside of a young leaf. Host plant: Ash, Privet, Lilac, and Elder. Dutch name: Gewone coronamot. Frisian name: – In line with its name, the Fenland Pearl (Anania perlucidalis) has a forewing that is round and has a pearly translucent white color with a dark moon-shaped spot halfway down the costa. On both the fore- and hindwing, two dark brown wavy lines are visible along the termen, the outermost of which is wider than the inner. The flying period in one generation is from June to August and the wingspan is 21-23mm. The larvae feed on the underside of a rolled leaf. Host plant: Creeping Thistle and Marsh Thistle. Dutch name: Donkere coronamot. Frisian name: – 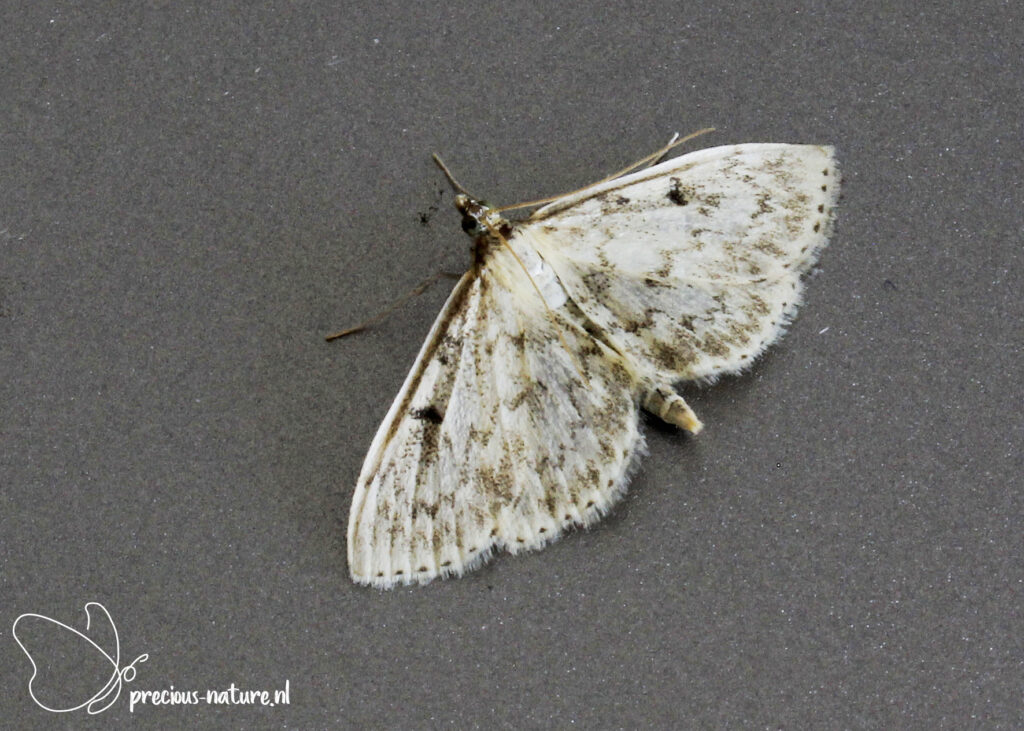 The Rice Leafroller (Cnaphalocrocis medinalis) is a species not found in Europe. I spotted this grass moth in Japan during a working visit to Kyoto. The wings are brownish-yellow with two distinct dark brown transverse lines. The fringe line consists of a brownish band and the costa of the wing is brown-black. The larva folds a leaf lengthwise and spins it closed, after which it feeds on the green tissue. Host plant: Rice. Dutch name: Rijstbladroller. Frisian name: – 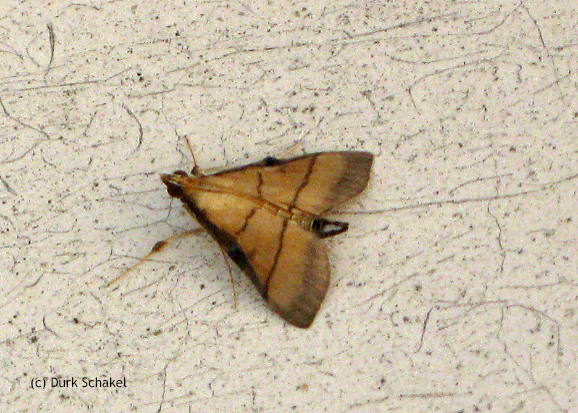 The European Corn-borer (Ostrinia nubilalis) is a micro-moth commonly found in the Netherlands. The male and female differ in color from each other. The top of the forewing of the male is usually reddish-brown to brown and of the female yellowish white. There is a yellow band on the outside of the median transverse line. It flies in one generation from June to August and has a wingspan of 26-30mm. The larvae bore into the stem close to the ground. Host plant: Maize. Dutch name: Maisboorder. Frisian name: – It took a while for the Straw-barred Pearl (Pyrausta despicata) to sit still so I could take a picture of it. This grass moth is mottled grey-brown, brown, or sand-colored. There are two dark dots in the middle of the wing, but with dark specimens, you hardly see those dots. There is a lighter zone along the costa of the wing and a lighter spot just in front of it. The flying period is in two generations from April to September and the wingspan is 14-19mm. The larvae feed in groups in silk spins. Host plant: Plantain. Dutch name: Weegbreemot. Frisian name: – 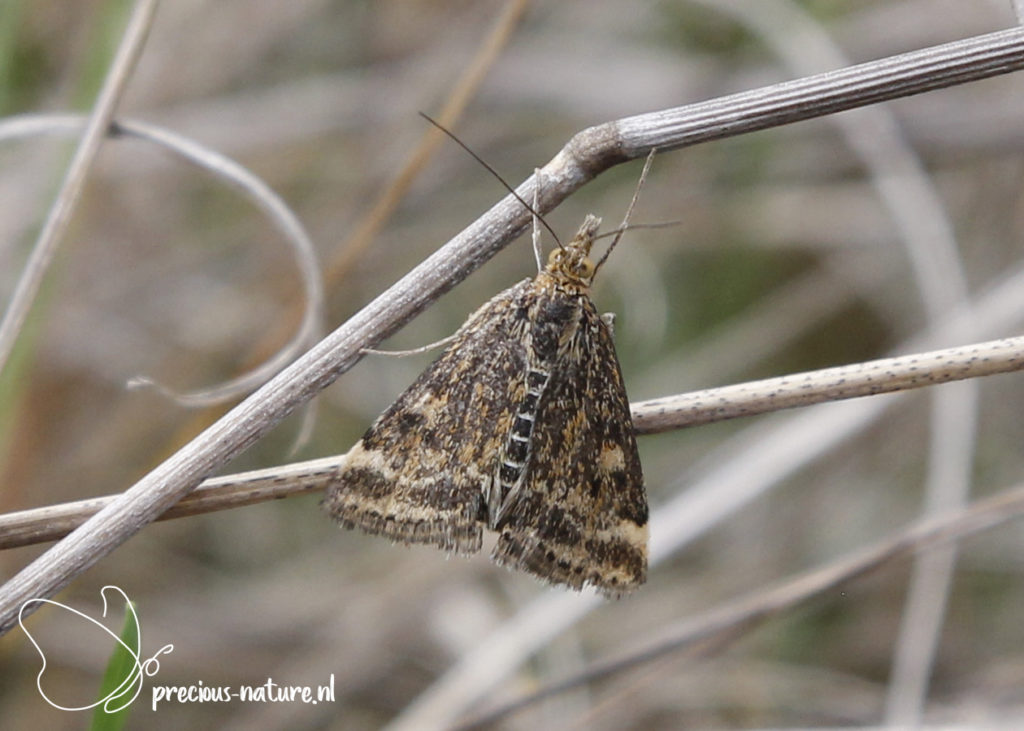 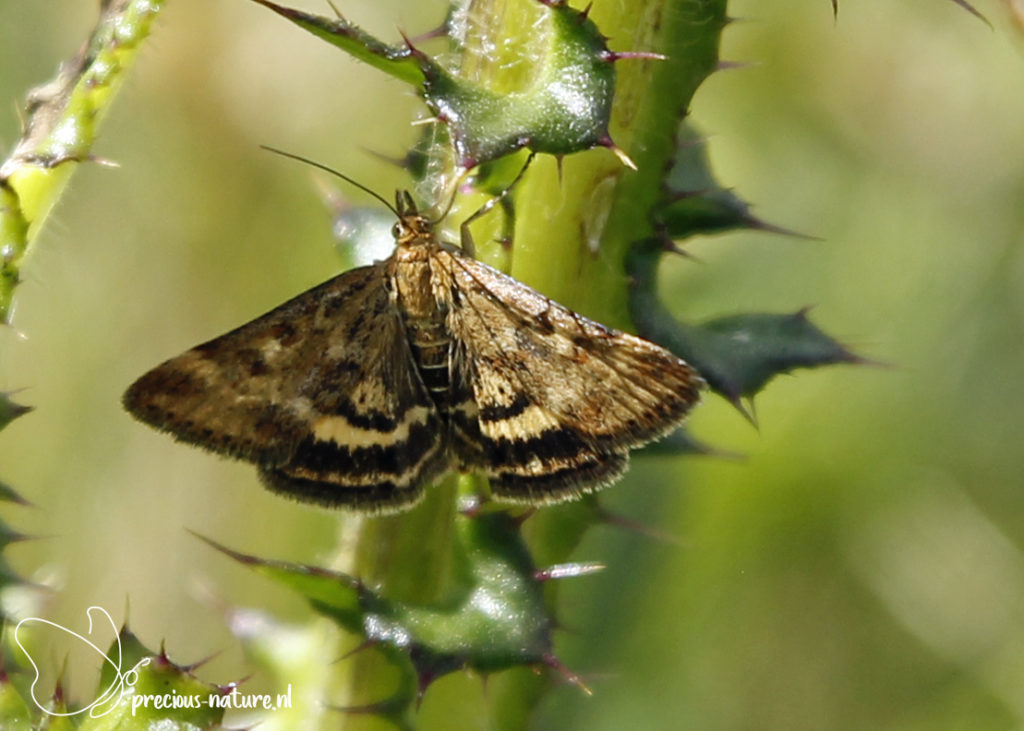