Sterrhines (Sterrhinae) are a sub-family of the Geometer Moths (Geometridae) with some 2,800 described species.

A moth with no eyelets on the front or rear wing is the Maiden’s Blush (Cyclophora punctaria). The base color is light brownish-yellow with the hindwing slightly lighter in color. Some specimens, especially the summer generation, have a large reddish blush on the forewing. Square reddish-brown spots can sometimes be seen near the tornus. A reddish central transverse line runs across the wings, sloping to the costa at an angle of less than 90 °. The post-median line of dots is wavy and deviates near the inner edge of the wing towards the tornus. Sometimes the wings are speckled black. The flight period is from April to the end of August in two generations and the wingspan is 26-32mm. Host plant: Oak and Birch. Dutch name: Gestippelde oogspanner. Frisian name: – 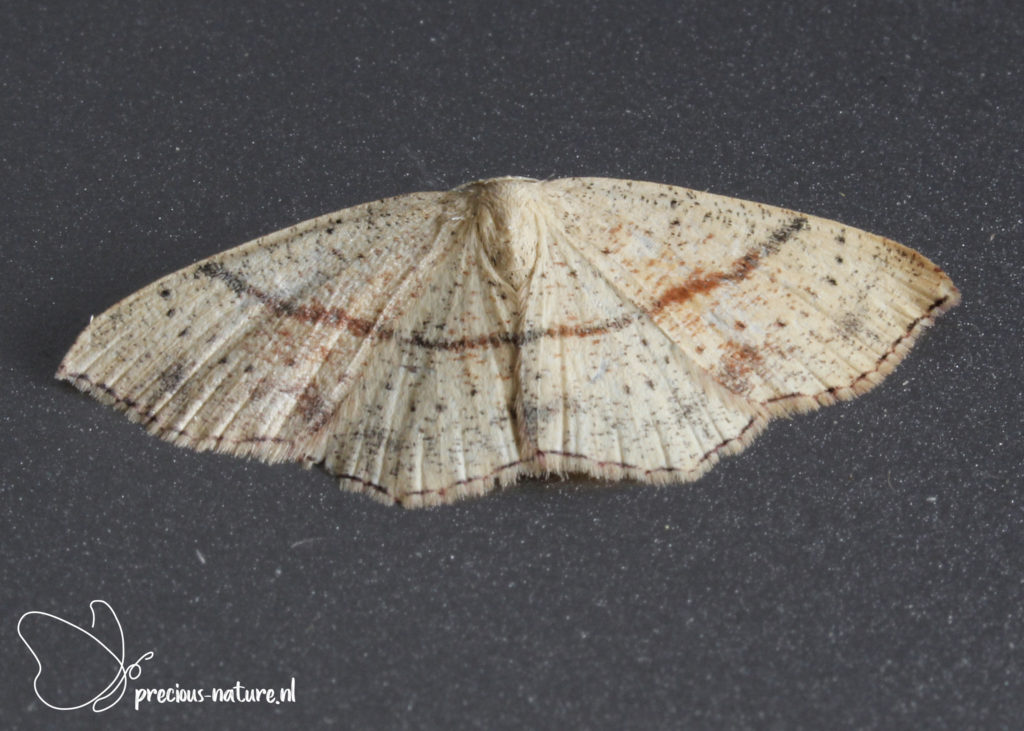 Walking around in another nature reserve often results in different species. This also applies to the Birch Mocha (Cyclophora albipunctata), which is mainly found in areas with sandy soils. The wings are solid grey-white with the inner and outer transverse lines consisting of small black spots. The central transverse line is often grey-black or reddish, but this is less visible in very light specimens. A clear eye mark can be seen on both the forewing and hindwing. The Birch Mocha is distinguished from the Dingy Mocha (Cyclophora pendularia) by the lack of the sickle-shaped apex of the forewing. The wingspan is 20-25mm and the flight period is from early May to late August in two generations. Host plant: Birch. Dutch name: Berkenoogspanner. Frisian name: – The Riband Wave (Idaea aversata) basically has two clearly different variations. That difference is situated in the median band. On the light yellow-brown wings there are many dark grey scales and three, two of which are clearly visible, transverse lines. In some specimens, the band between the two outer transverse lines is dark-colored, so that a clearly visible band runs over the wings. There is a clear dot on both the fore- and hindwing. The Riband Wave flies in two generations from June to September and the wingspan is 28-32mm. Host plant: Bedstraws, Wood Aven, Dandelions, and Dock. Dutch name: Grijze stipspanner. Frisian name: Grize stipspanner. 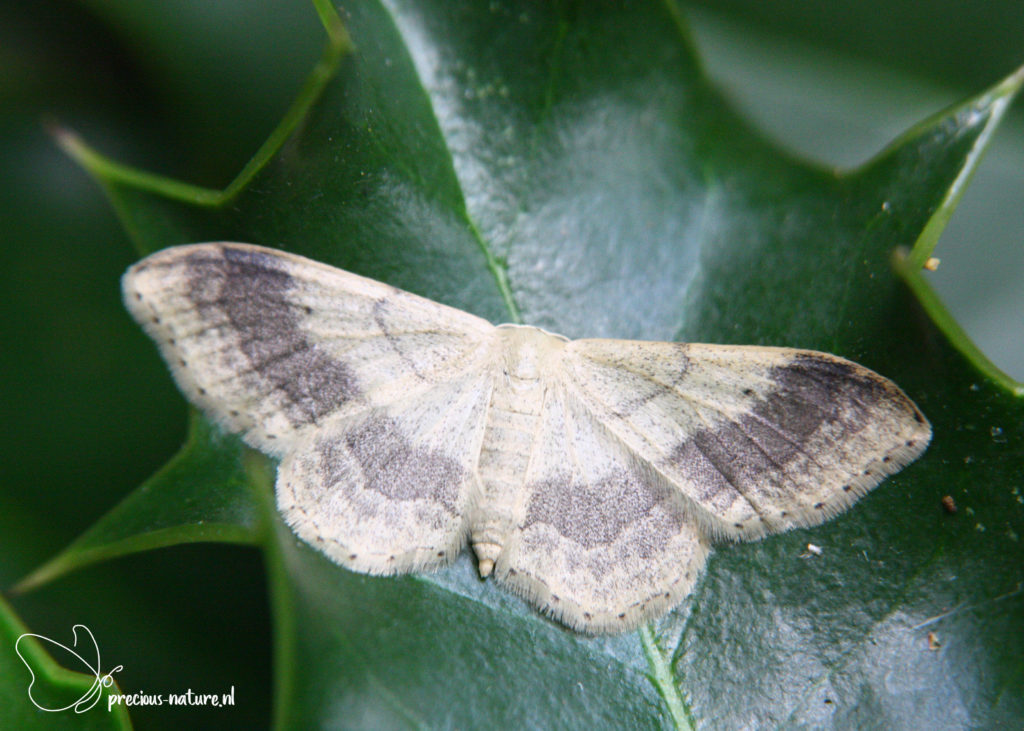 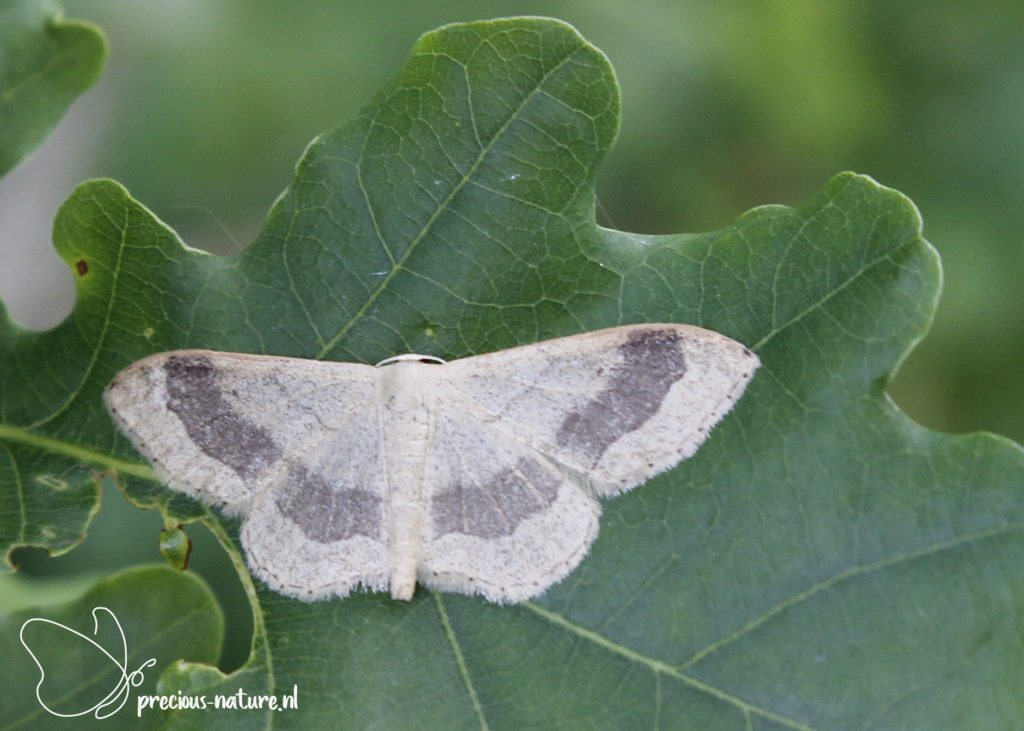 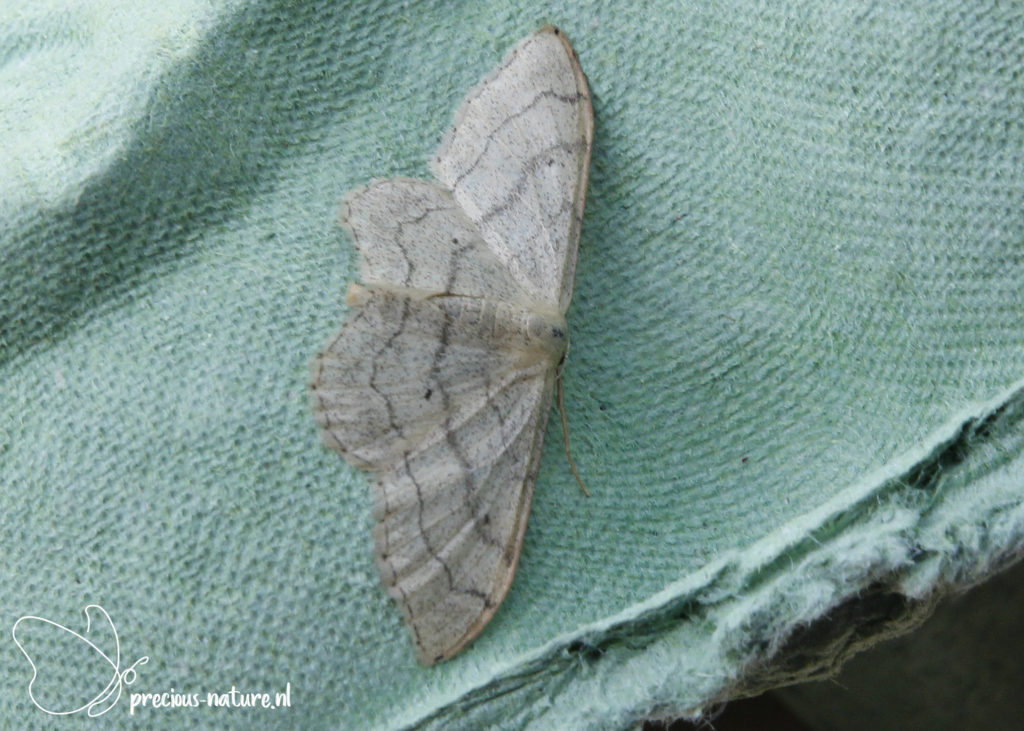 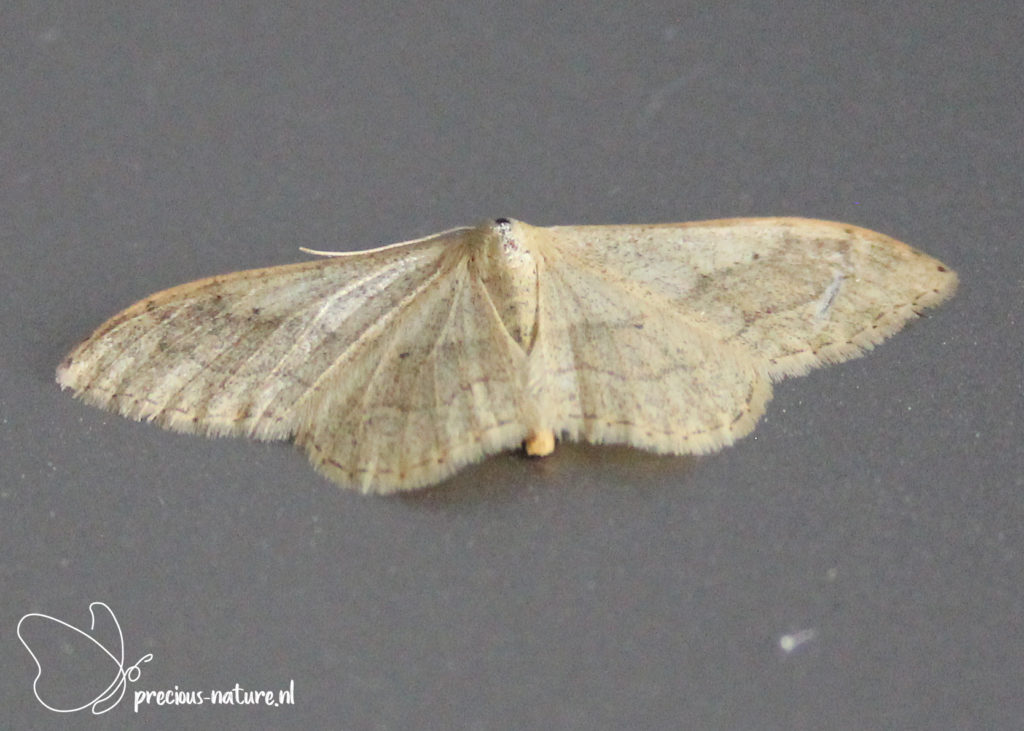 The Small Dusty Wave (Idaea seriata) has a clear central spot on all wings. The ante-median and post-median lines are thin but always clearly visible. The fringe line along the termen consists of alternating bows and dots and in some specimens, a yellowish color can be seen in the fringes. The wings are further dark speckled. He flies in two generations from May to October and the wingspan is 19-21mm. Host plant: Herbaceous plants, including Ivy. Dutch name: Paardenbloemspanner. Frisian name: Hynsteblomspanner. I couldn’t find a Dutch name for the Portland Ribbon Wave  (Idaea degeneraria). On the internet, there was an English and German name for this moth but no Dutch name. Possibly because this moth is hardly seen in the Netherlands. Therefore I derived a Dutch name from the foreign languages. This fairly large moth has two colors, brown and pale white. The outer part of the fore- and the hindwing is pale white and the inner half brown, the part closest to the wing base being lighter brown. A clear black dot can be seen on both the fore- and hindwing. The flight period is from April to September in two generations and the wingspan is 26-31mm. Host plant: Dandelion and Knotgrass. Dutch name: Tweekleurige bandspanner. Frisian name: – A nice surprise in the light trap after a cloudy summer night was the Single-dotted Wave (Idaea dimidiata). The base color of the wing is straw-colored whitish to greyish light brown. The black dots in the middle are always clearly visible. The median transverse lines are usually thin and faintly visible except for the dots on the veins. The post-median line is usually visible with the characteristic black dot at the costa. The fringe line is provided with a row of black dots and at the tornus, there are striking closely adjacent black spots. The wingspan is 13-18mm. The flight period is from June to August and sometimes a second generation in September. Host plant: Cow Parsley and Burnet Saxifrage. Dutch name: Vlekstipspanner. Frisian name: Flekstipspanner. The Small Fan-footed Wave (Idaea biselata) with cream-colored and dark speckled wings has a number of resembling species. A central black dot can be seen on both the fore- and hindwing. The median line on the forewing curves around this dot in a small arc. In the Small Dusty Wave (Idaea seriata), the median line runs close to the central spot. Characteristic is the jagged post-median line with a grey-brown zoom field outside that is interrupted by an irregular light wave line. With the Single-dotted Wave (Idaea dimidiata), the marginal area only has a number of dark spots. In addition, the sharply deflected apex of the Small Fan-footed Wave is striking. The wingspan is 15-20mm and the flight period runs from May to the end of September in one or sometimes two generations. Host plant: Various herbaceous plants and fallen leaves. Dutch name: Schildstipspanner. Frisian name: Skyldstipspanner. Geometer moths are often difficult to identify, but that is not a problem for the Least Carpet (Idaea rusticata). The shiny white forewing has a dark brown median band and base. The hindwing has dark serrated spots that form transverse lines. A black center dot can be seen on both the forewing and the hindwing. At the forewing, it is less noticeable because of the dark brown median band. In addition to the dark brown head and the dark brown transverse stripes on the abdomen, the white segment immediately after the head is clearly visible. The wingspan is 19-21mm and the flight period runs from June to October in two generations. Host plant: withered and dead leaves of various plants, vine, and Ivy. Dutch name: Least Carpet. Frisian name: – 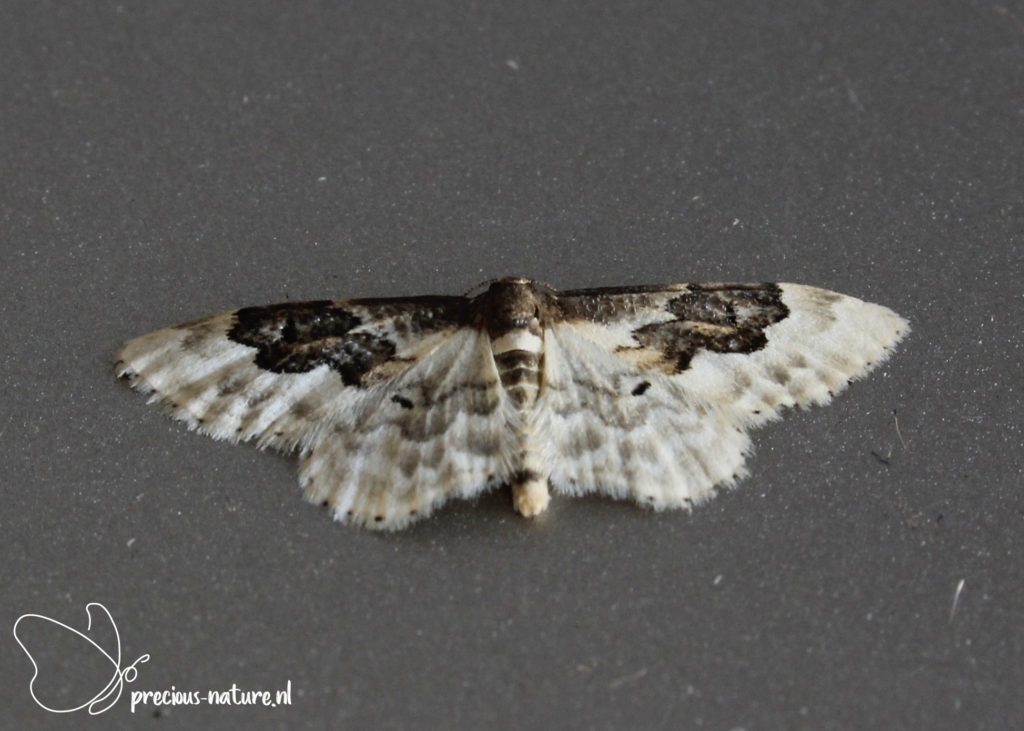 The Lesser Cream Wave (Scopula immutata), a relative small member of the Sterrhines,  has wings with thinly scattered black scales. The male’s wings are creamy-white and the female’s white. The light yellow transverse lines are clearly visible and are undulated. There is always a clearly visible black dot on the hindwing. The fringe line is darker and often there are faint spots here. He flies in one generation from June to September and the wingspan is 24-27mm. Host plant: Meadowsweet. Dutch name: Bosspanner. Frisian name: Boskspanner. 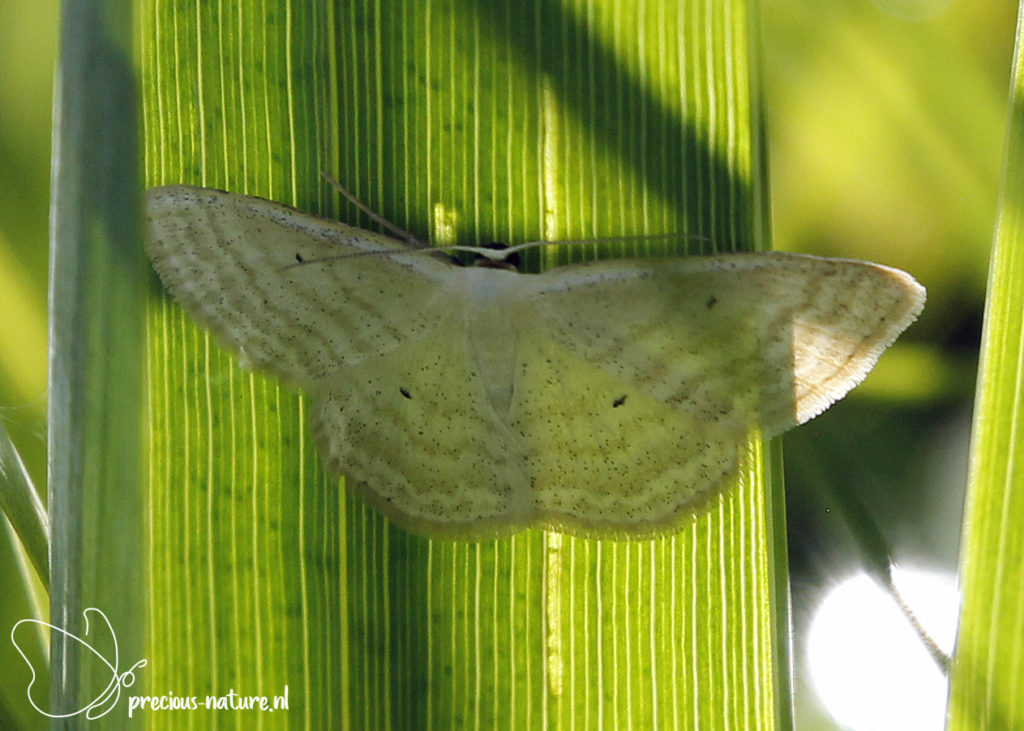 The Blood-vein (Timandra comae) is easily recognized by the pink-red or sometimes a brownish-red line that runs from the apex over the cream-colored forewing to the dorsum. The dorsum of the hindwing also has a thin rose-red line or a fuzzy strip, but some specimens lack that color. There is still a thin grey line under the wider colored median band. Furthermore, the Blood-vein has a distinct black point near the costa. He flies in usually three generations from May to October and the wingspan is 30-46mm. Host plant: Common Sorrel and Knotgrass. Dutch name: Lieveling. Frisian name: Readrânespanner. 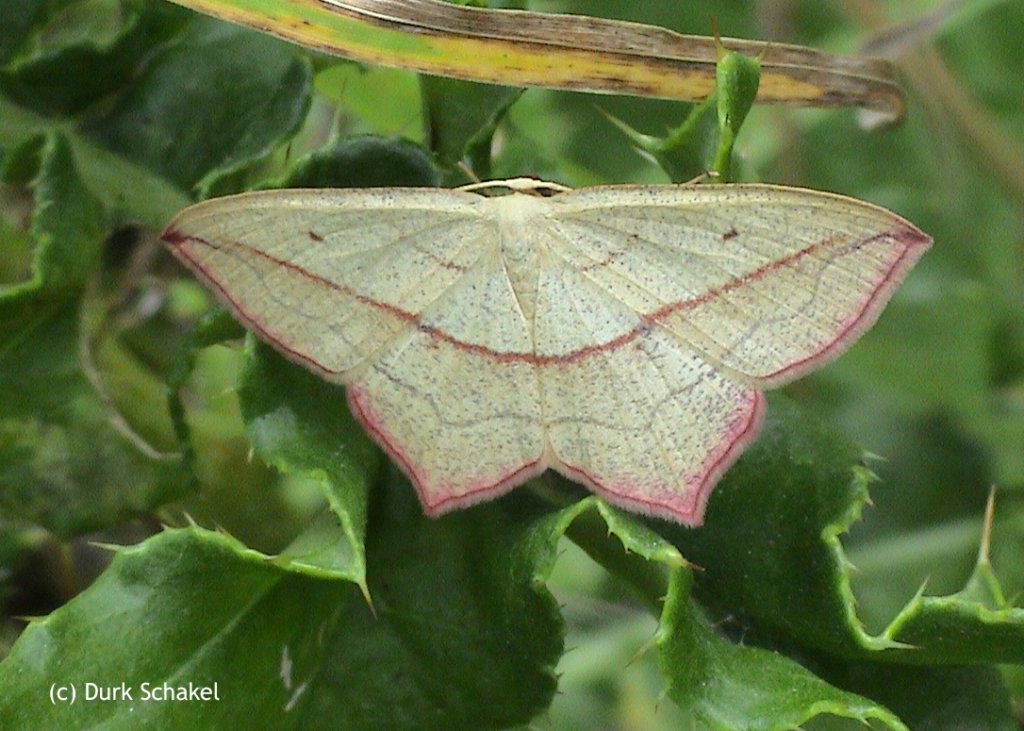 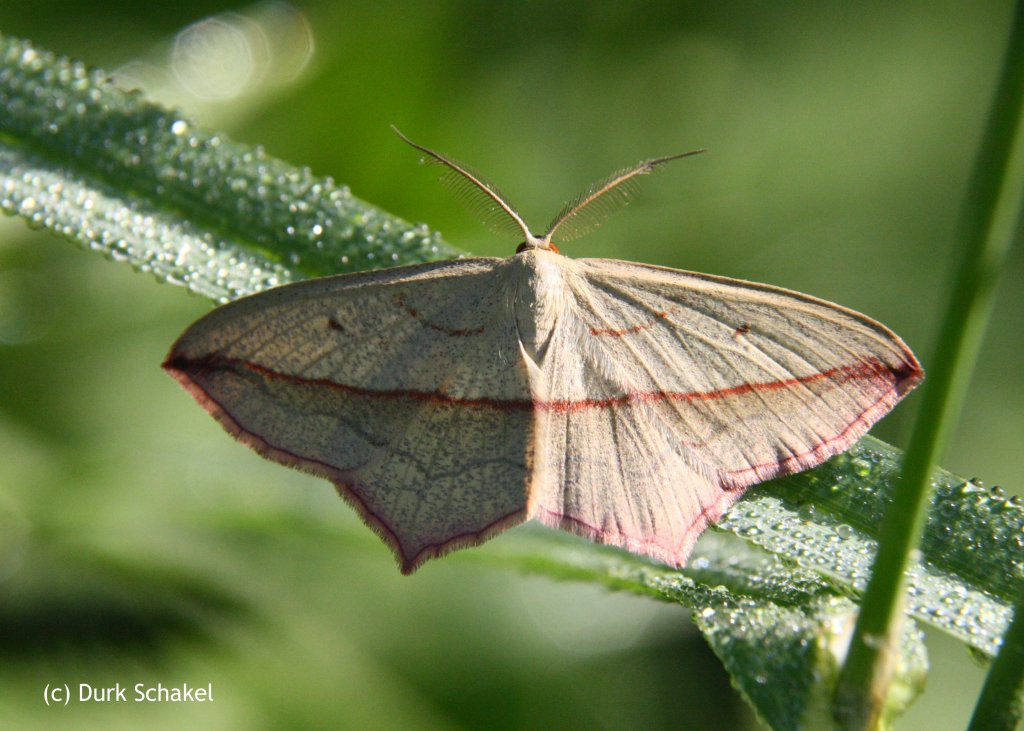