Prominent Moths (Notodontidae) have a thick body and a hairy appearance. Most have long and tapered front wings that are held vertically against the body in the resting position. In some species, you can see a tooth-shaped protrusion on the inner edge of the front wing when in the resting position. During the day you hardly encounter these moths. The species that I have spotted so far have been attracted to light with a special lamp.

The Pebble Prominent (Notodonta ziczac) was a striking appearance for me due to the wood texture of this moth. The forewing is brownish-yellow with a white spot in the middle plane along the costa, with a black-brown spot on the outside consisting of all elongated surfaces. The legs are heavily hairy. It flies in two generations from April to September and its wingspan is 40-45mm. Host plant: Willow and Poplar. Dutch name: Kameeltje. Frisian name: Kamielflinter. 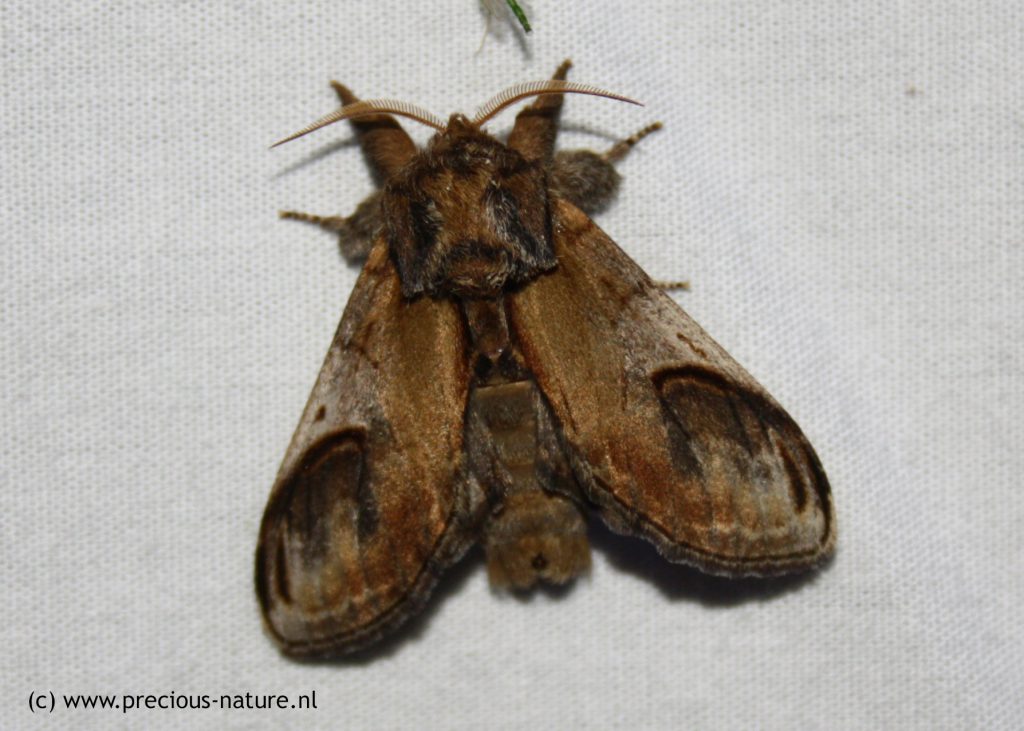 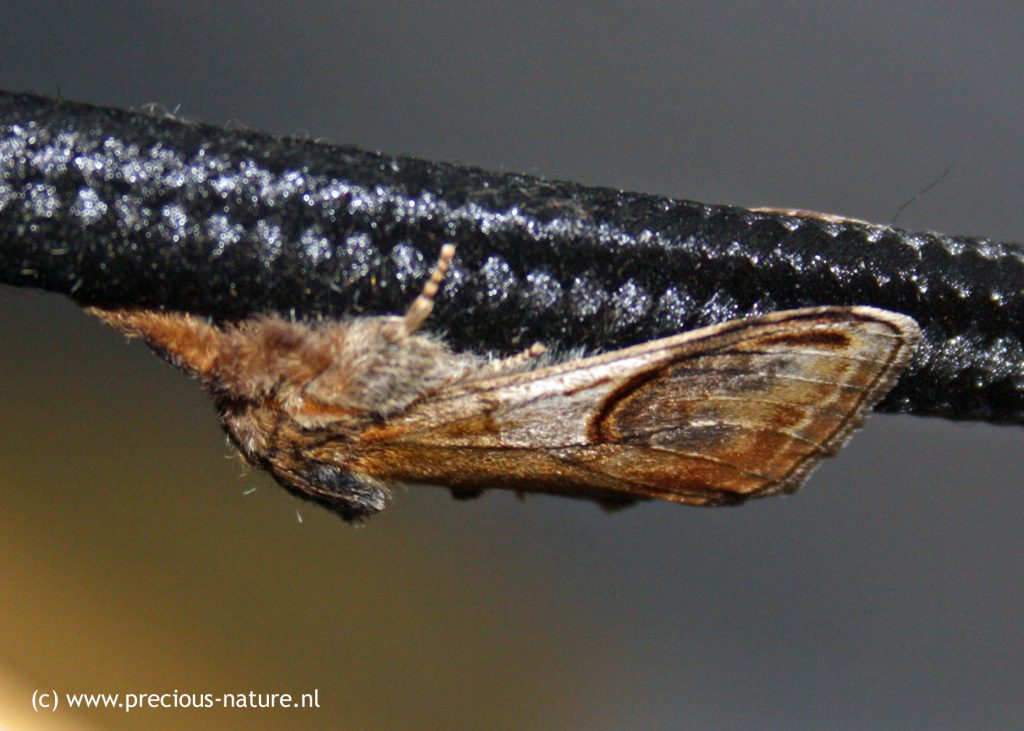 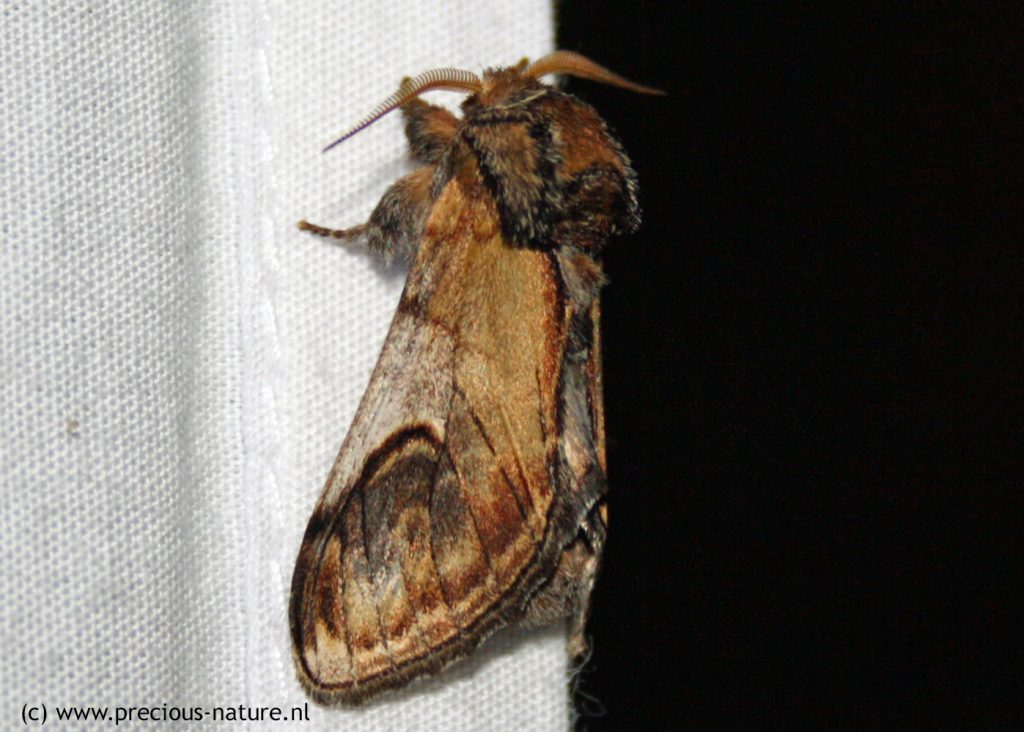 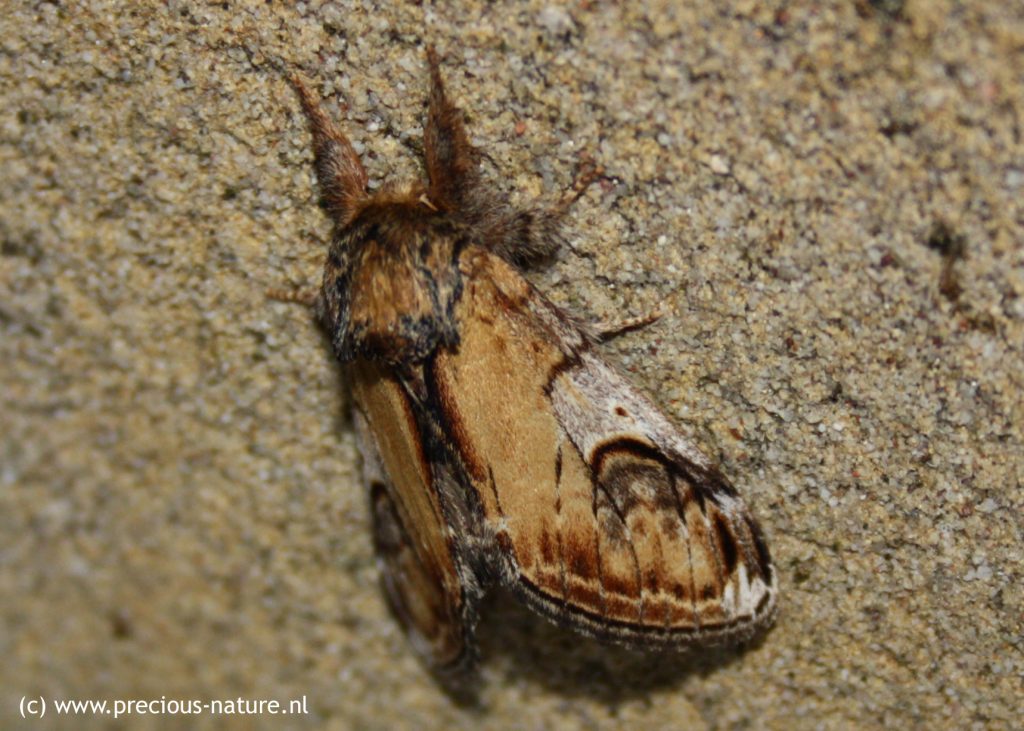 The Iron Prominent (Notodonta dromedarius) has characteristic reddish-brown or rusty brown streaks at the wing base and at the dorsum. Near the termen is a red-brown cross band, which sometimes shows some yellow. This prominent moth is also dark grey. The colors and drawing may vary. Dark specimens occur regularly with little red-brown. The top of the hindwing is light grey. The flight period is in two generations from mid-April to late August and its wingspan is 35-40mm. Host plant: Birch, Alder, Hazel, and Oak. Dutch name: Dromedaris. Frisian name: Drommedaris.

They remain beautiful moths, the species of the Prominent Moths. The Swallow Prominent (Pheosia tremula) is certainly one of them. A beautiful specimen was attracted to the light and landed on my white sheet. It resembles the Lesser Swallow Prominent (Pheosia gnoma), but is distinguished by the inconspicuous white wedge-shaped spots along the dorsum. With the Swallow Prominent, a very clear wedge-shaped white spot can be seen. Furthermore, a black and brown trimmed band runs along the termen. There are clearly white lines in this band. A longitudinal white band runs along the center of the wing, with a black-brown oblique spot, which runs away from the apex. The wings are held close to the body at rest, steeply angled. The flight period is from mid-April to September in two generations and its wingspan is 44-56mm. Host plant: Poplar, Willow, and Birch. Dutch name: Brandvlerkvlinder. Frisian name: Brânflerkflinter. 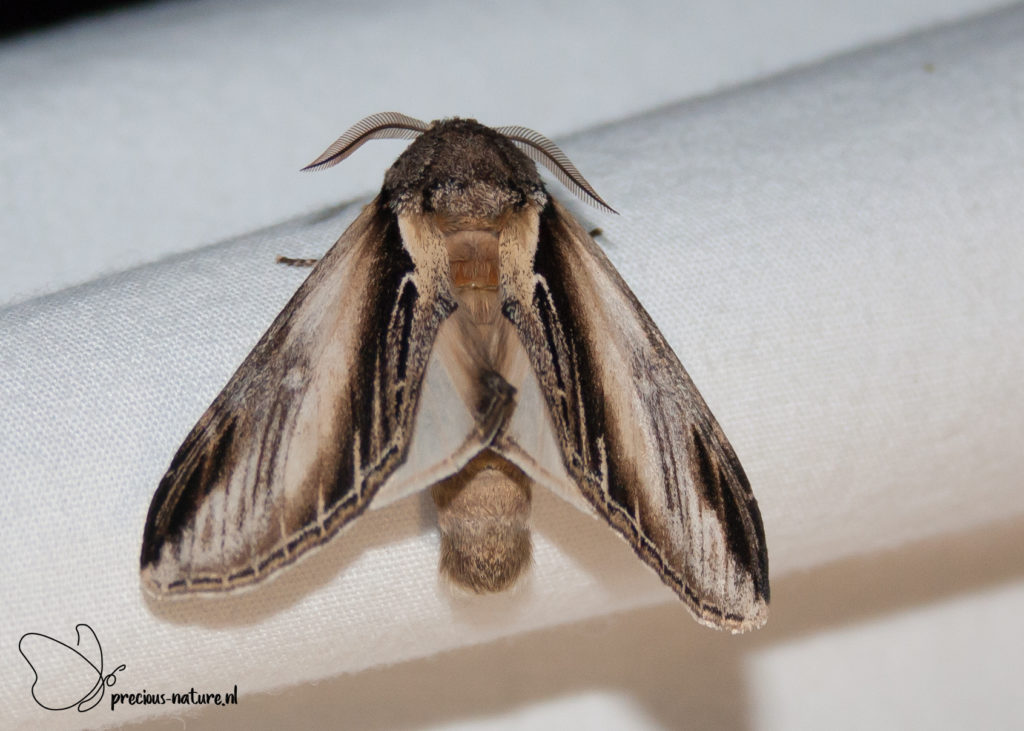 The Lesser Swallow Prominent (Pheosia gnoma) is very similar to the Swallow Prominent (Pheosia tremula), but has a bright white wedge in the inner edge corner of the forewing that contrasts clearly with the black color. This white wedge has a wide base and always ends in front of the center of the forewing. In the Swallow Prominent, this less conspicuous wedge extends beyond the center of the forewing. The silvery-white forewing is narrow and tapered. There are dark brown or black spots along the edges. The flying period is from mid-April to the end of September in two generations. The wingspan is 45-50mm. Host plant: Birch. Dutch name: Berkenbrandvlerkvlinder. Frisian name: Bjirkebrânflerkflinter. 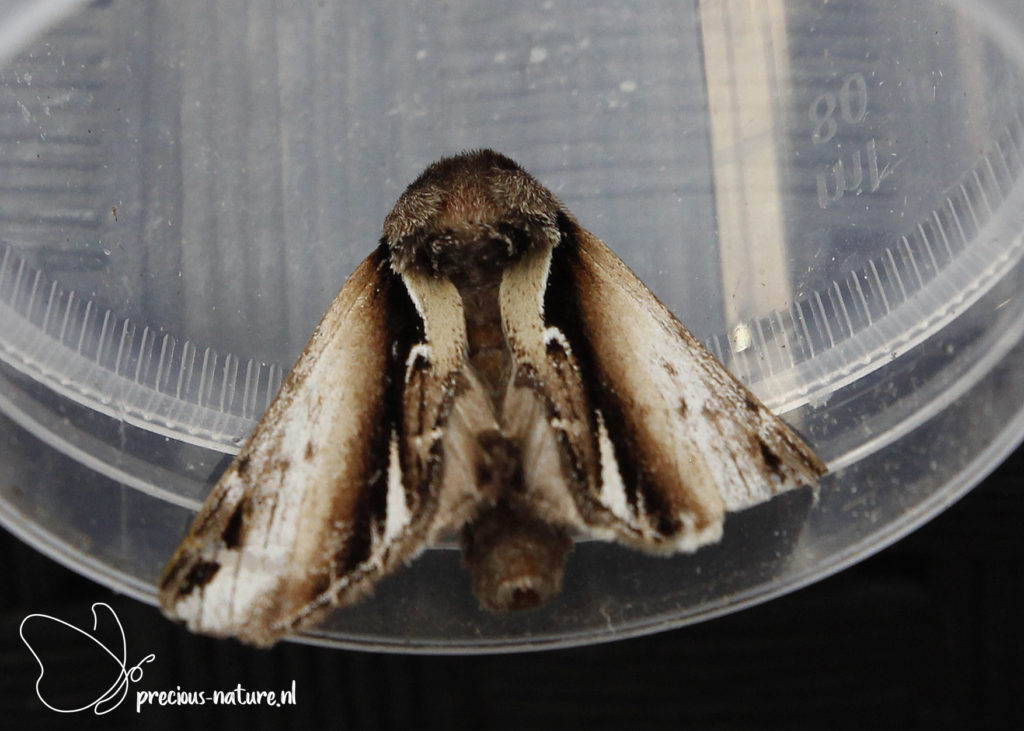 The year 2019 was the year of the beautiful spots. This included a beautiful Prominent Moth, the Buff-tip (Phalera bucephala). This moth has grey-white colored wings with a striking large yellow spot near the apex and a flattened yellow, brown-rimmed head. In the resting position, the wings are folded around the body, making the moth look like a broken birch twig. Halfway through the wings, there is a double transverse line of which the inner is light brown and the outer dark brown to black. This combination also stands as a partition for the large yellow spot. I also spotted the caterpillar, which is yellow-orange with a striking black spot pattern. The head is black with an inverted yellow ‘Y’ on it. The eggs, white spheres with a black dot, can be found at the bottom of the leaves of deciduous trees. The flight period is in one generation from April until August and its wingspan is 44-68mm. Host plant: Willow, Birch, Oak, Linden, and Hazel. Dutch name: Wapendrager. Frisian name: Wapendrager. 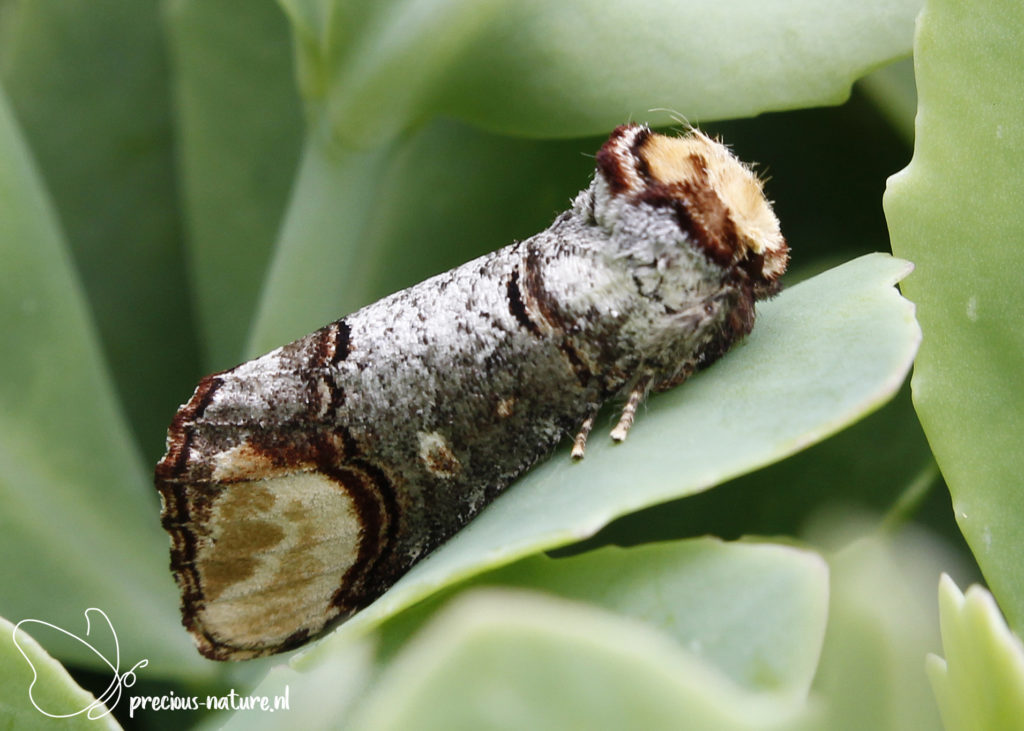 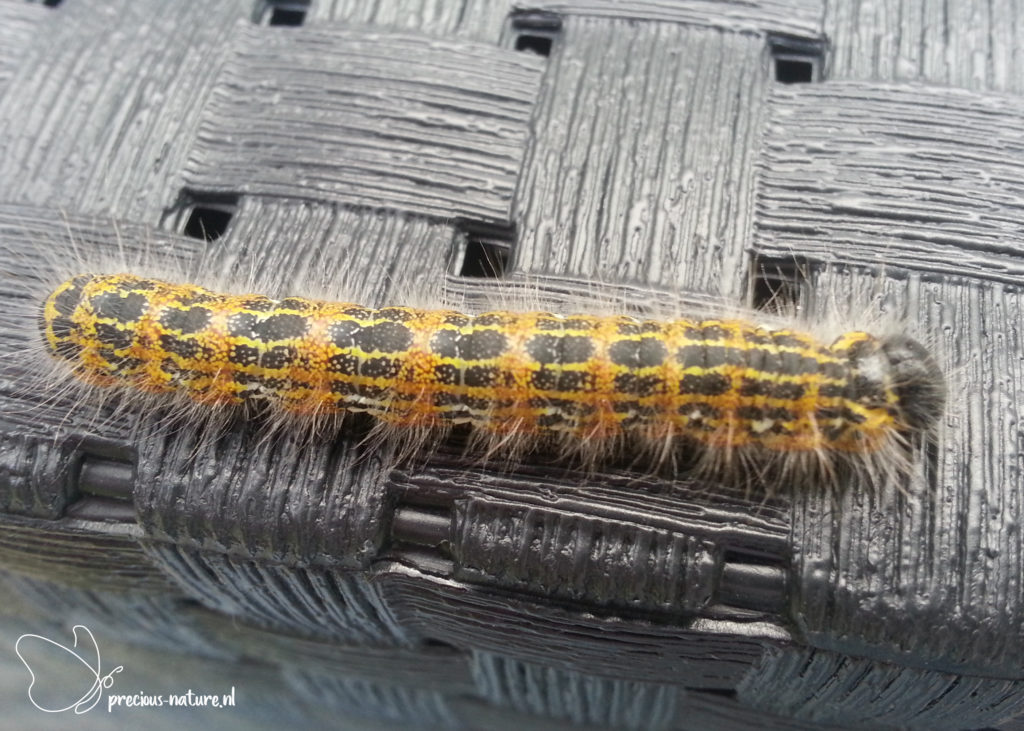 An interesting species is the Pale Prominent (Pterostoma palpina). It has a characteristic appearance when resting, resembling a piece of wood. Most notable are the long protruding, slightly upwardly pointing labial palps. The males also have two hair tufts at the end of the abdomen. The narrow forewing is greyish-yellow with dark veins and dots. In a resting position, a striking rectangular, dark-edged comb is visible on the back. The fringes of the wings are sometimes scalloped and the antennae are very strongly feathered in the male and only slightly feathered in the female. The flight period is in two generations from April to September and its wingspan is 35-55mm. Host plant: Willow and Poplar. Dutch name: Snuitvlinder. Frisian name: Snúttoskflinter. 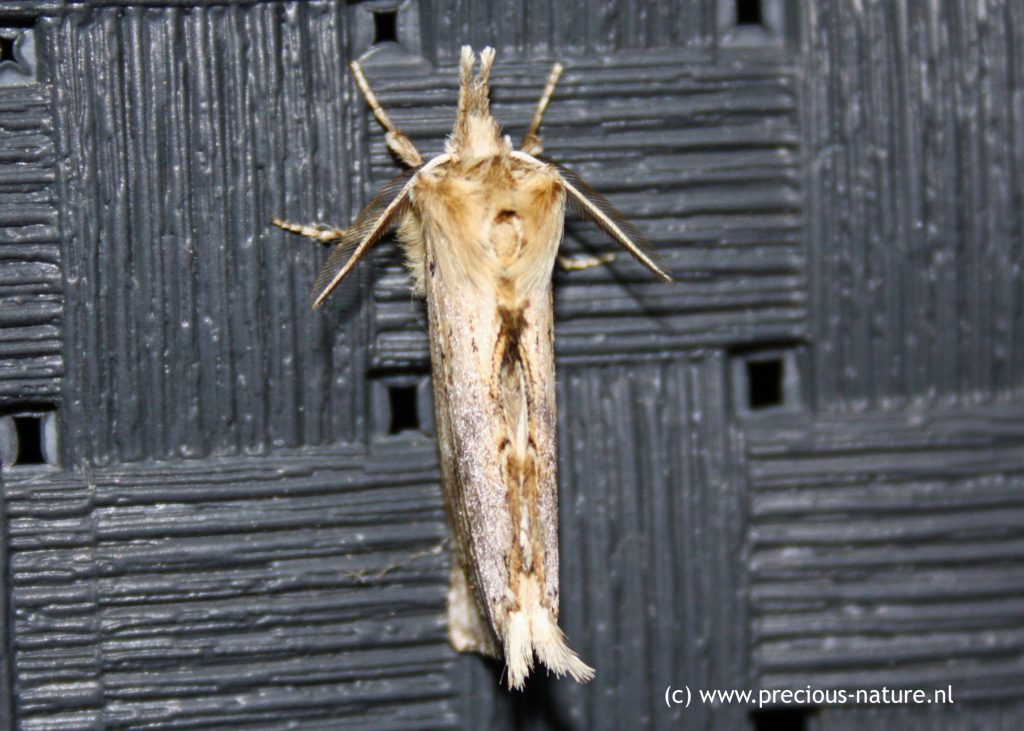 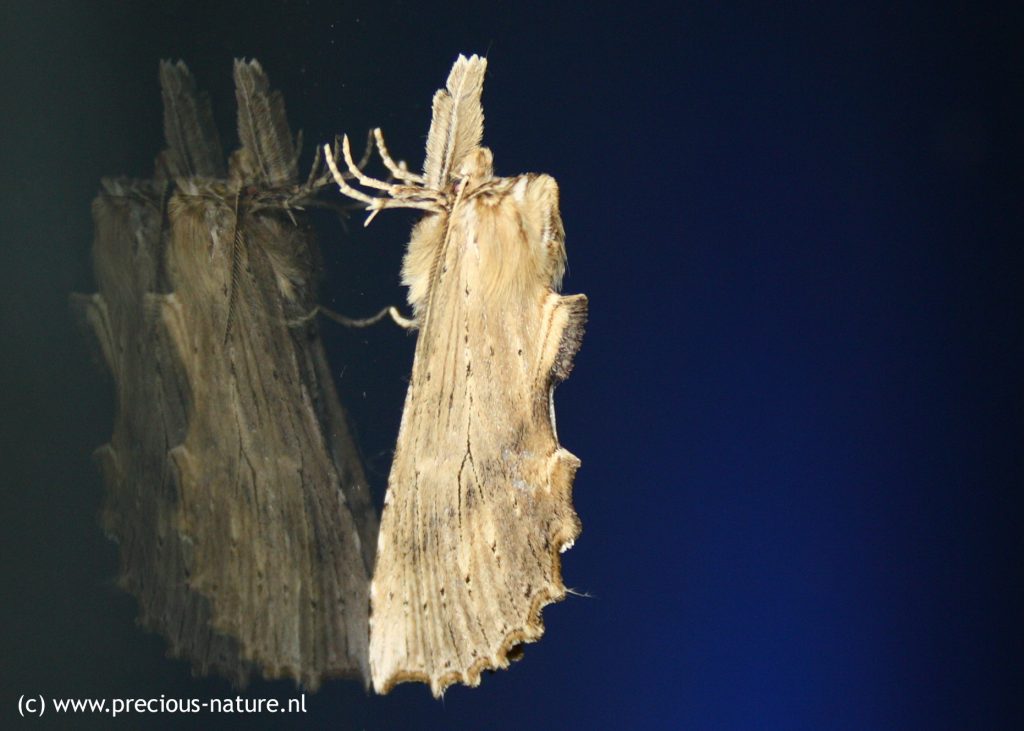 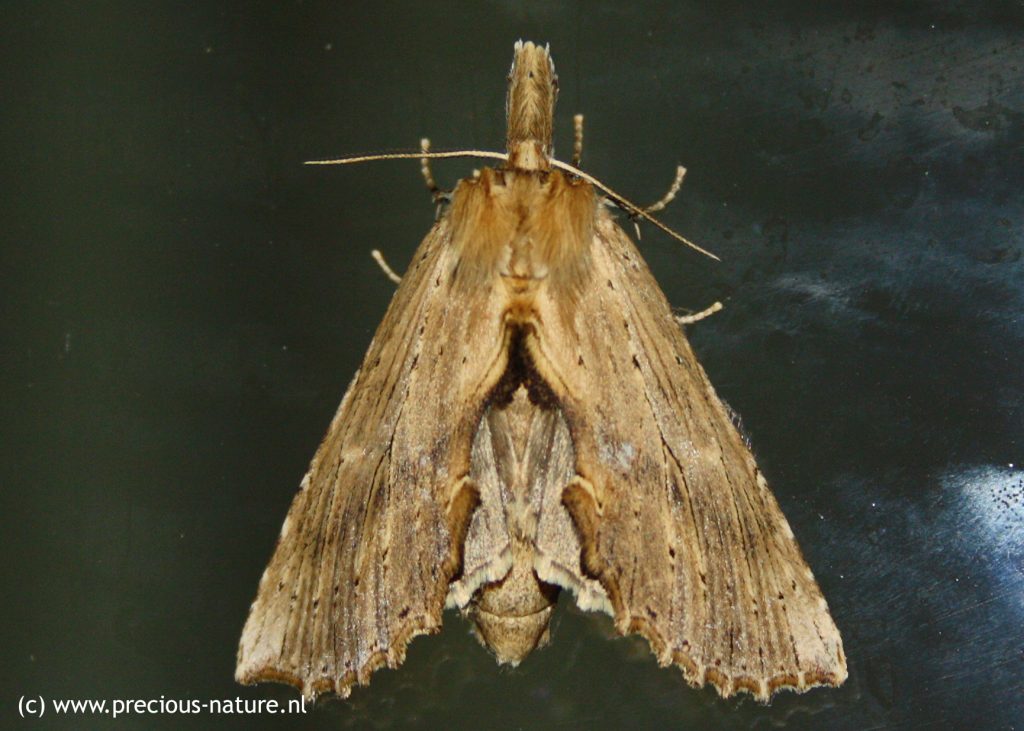 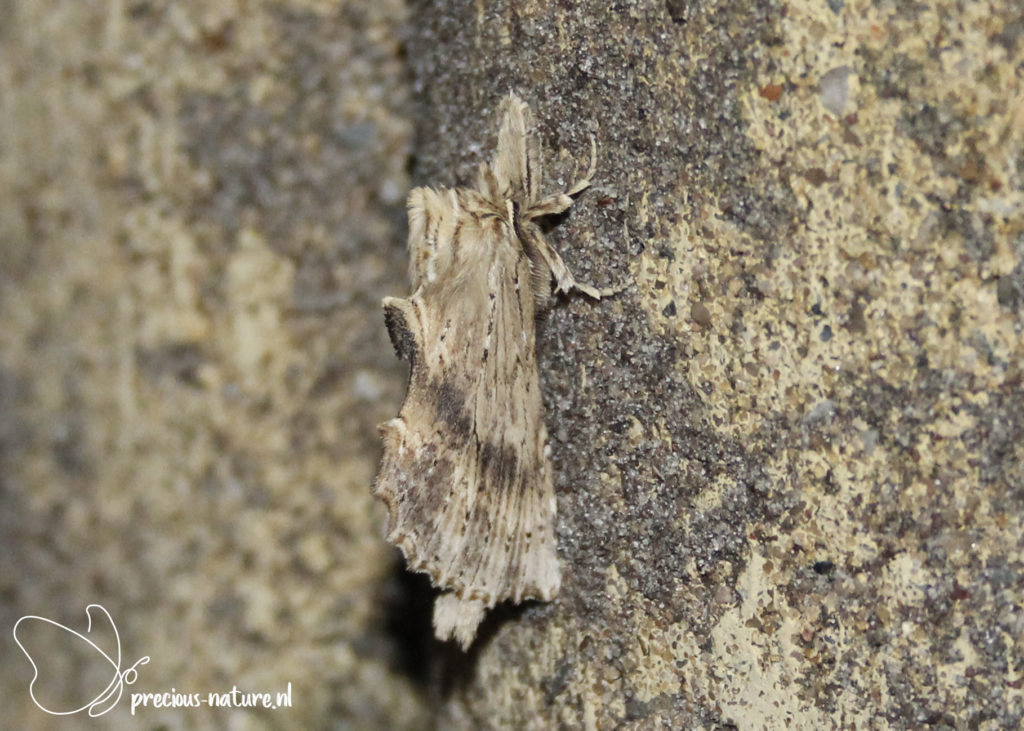 The advantage of not attracting moths in your backyard at home, but in a tree-rich environment is that you are able to spot other species. The Coxcomb Prominent (Ptilodon capucina) is an example of this. The forewing of this moth has an even light or dark warm brown ground color. The teeth on the inner edge of the forewing form a striking dark brown bulge on the dorsal side when resting. A characteristic large hairbrush is visible on the breast piece, which is colored light yellow at the top and points forward like a kind of crown. The flying period is from mid-April to early September in two generations. The wingspan is 35-40mm. Host plant: Birch and Oak. Dutch name: Kroonvogeltje. Frisian name: Kroanfûgeltsje. 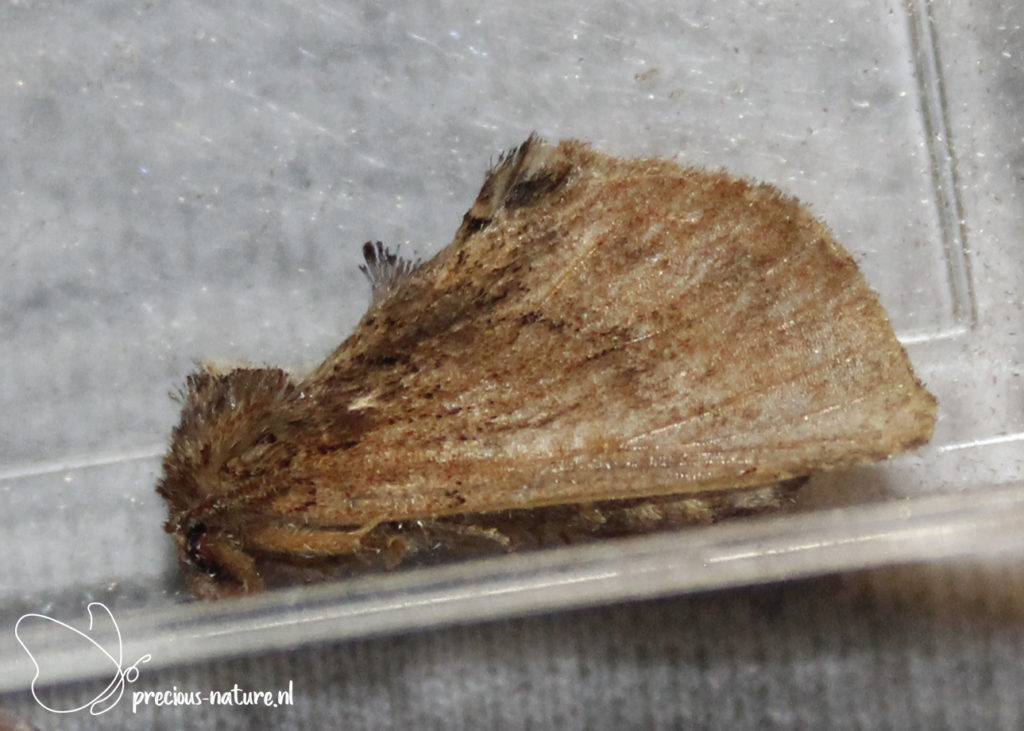 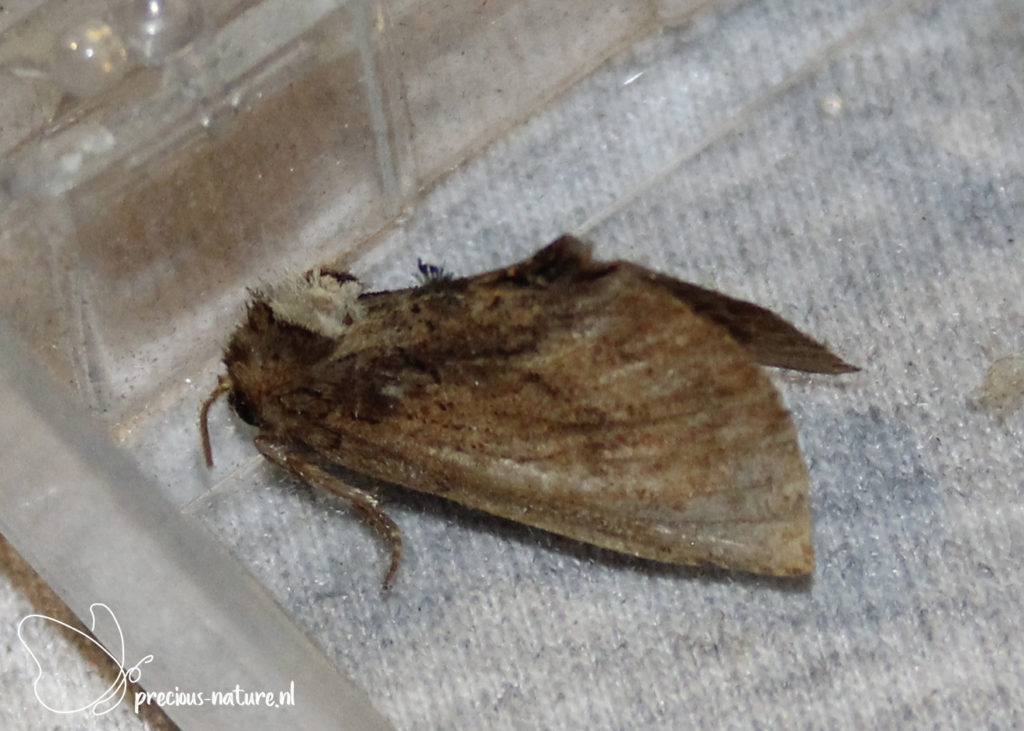 The Sallow Kitten (Furcula furcula) is very similar to the Alder Kitten (Furcula bicuspis) and the Poplar Kitten (Furcula bifida). The Sallow Kitten is grey-white with fine black pollination on the forewing (not fore the Alder Kitten) and a broad grey sometimes yellowish median band. This median band is bordered on the inside with a straight dark edge and on the outside with an irregular black edge. With the Alder Kitten, this band is much darker and closer to the costa it becomes narrower. The difference with the Poplar Kitten is, besides this moth is larger, that the median band is bordered with much darker lines. The top of the thorax of the Sallow Kitten has the same color shade as the middle band. The flight time is from April to September in two generations and the wingspan is 27-35mm. Host plant: Sallow, Aspen, and Poplar. Dutch name: Kleine hermelijnvlinder. Frisian name: Lytse harmelingflinter. 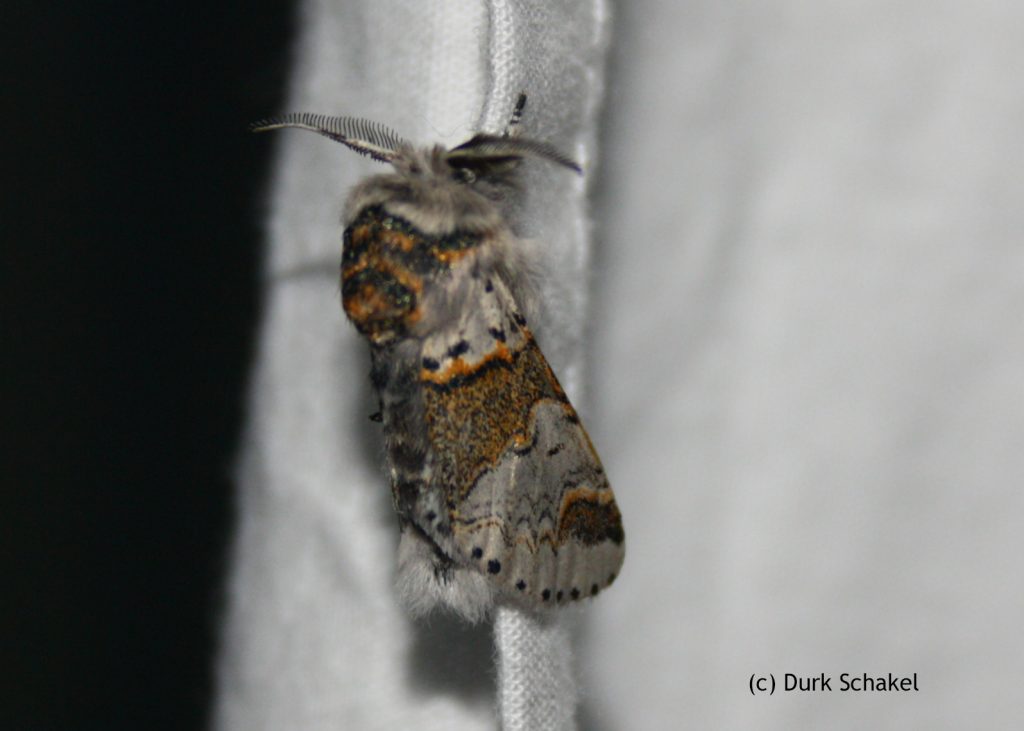 The Tawny Prominent (Harpyia milhauseri) is easily recognizable with dark grey to black veins on the light grey forewing. Two black parallel wide lines run along the inner edge of the forewing. Just before the apex is a wide yellow-brown band. On the white hindwing, there is a striking black spot in the inner edge corner. The antennas are three-quarter sprung. The flying period is in one generation from April to July and the wingspan is 50-60mm. Host plant: Oak, sometimes Beech and Birch. English name: Tawny Prominent. Frisian name: Draakflinter.

A well recognizable species, which gets its name from the special look of the caterpillar, is the Lobster Moth (Stauropus fagi). Both wings have a grey-brown ground color with, especially at the base, a grey yellowish pollination. A reddish-brown zone can be seen along the dorsum of the forewing. The serrated outer transverse line is white-yellow and the broad line along the marginal area consists of a row of black dots. In the resting position, the hindwing extends below the costa of the forewing. The wingspan is 45-60mm and the flying period is from May to mid-August in one generation. Host plant: Beech, hazel, oak, and birch. Dutch name: Eekhoorn. Frisian name: Iikhoarnflinter. An unexpected guest in the North is the Oak Procession Moth (Thaumetopoea processionea). It is often negative in the news when there is a lot of nuisance from the caterpillar of this Prominent Moth in the middle and south of the country. The forewing shows some black, inwardly tapering transverse lines and an indistinct comma-shaped central dot. The forewing is brownish to yellow-grey and the wing root is always strikingly lighter colored. The flight period is one generation from July to September. Host plant: Oak. Dutch name: Eikenprocessierups. Frisian name: Ikeprosesjerûp.