Xyleninae is a subfamily of the Owlet Moths (Noctuidae).

A very variable owlet moth in color but still easily recognizable is the Beaded Chestnut (Agrochola lychnidis). The forewing has a maroon or reddish-brown base color, but can also be yellowish or sometimes darker and greyish. The dark eye mark is small and elongated, and the kidney mark is usually darker and narrow. On the inside of the wave line, a dark brown or blackish short slash or wedge-shaped spot can often be seen along the costa. In the midfield some weaker black spots are present. Some specimens have a weak pattern, others have striking light or dark transverse lines and light-colored veins. The flight period is from September to mid-November in one generation and the wingspan is 30-35mm. Host plant: Various trees and shrubs. Dutch name: Variabele herfstuil. Frisian name: Fariabel hjerstûltsje. 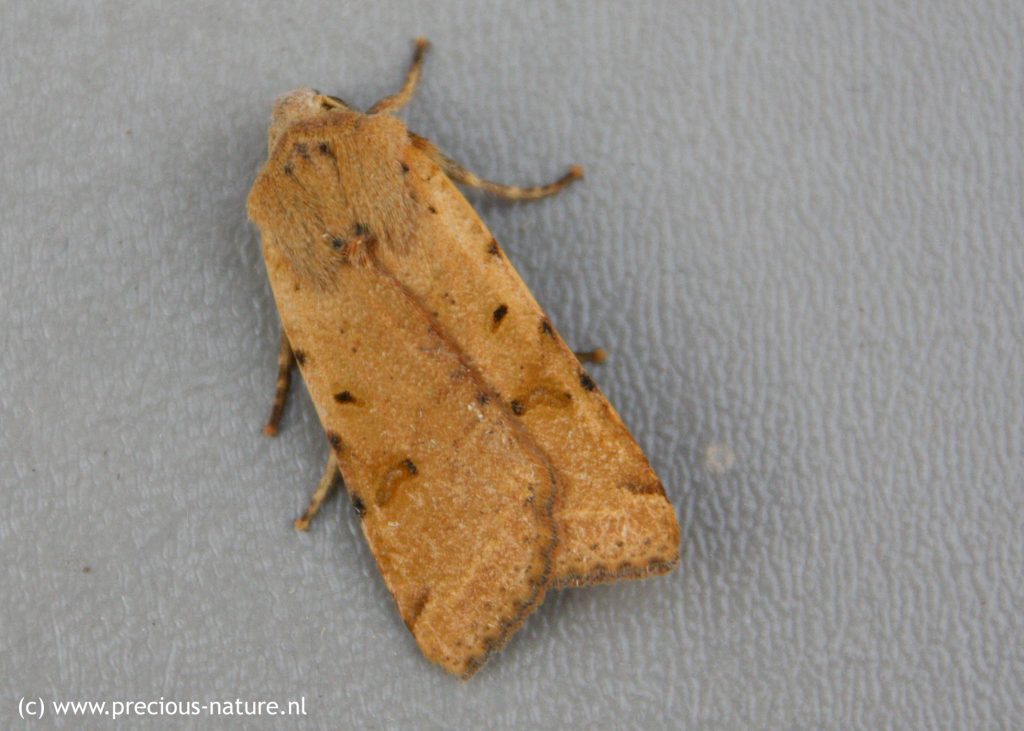 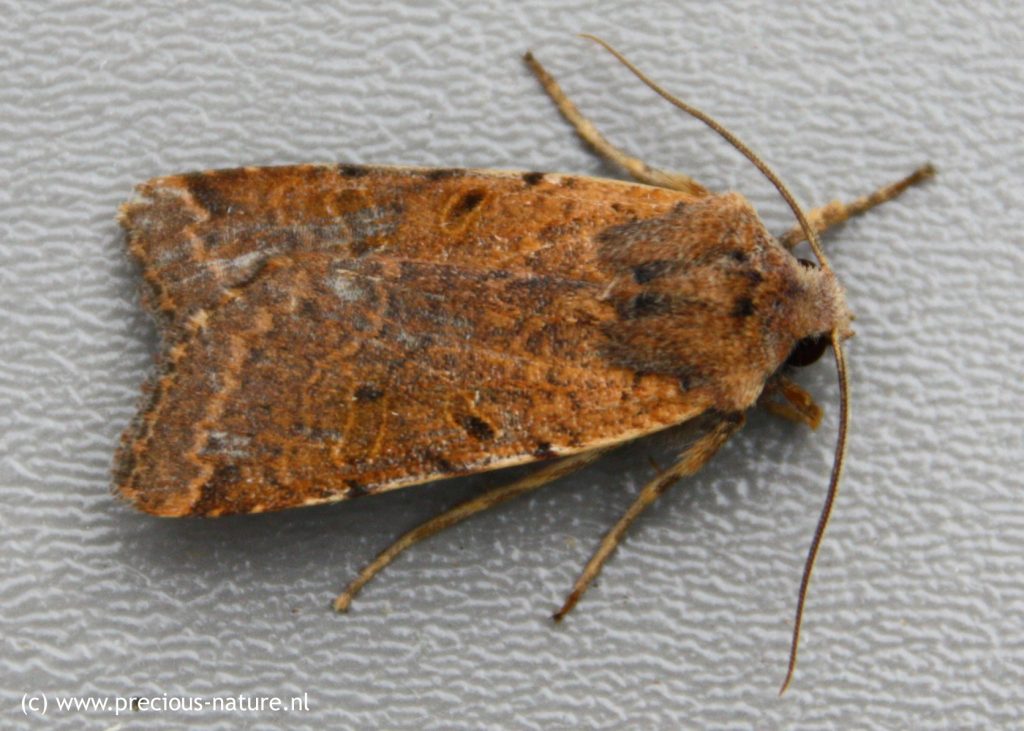 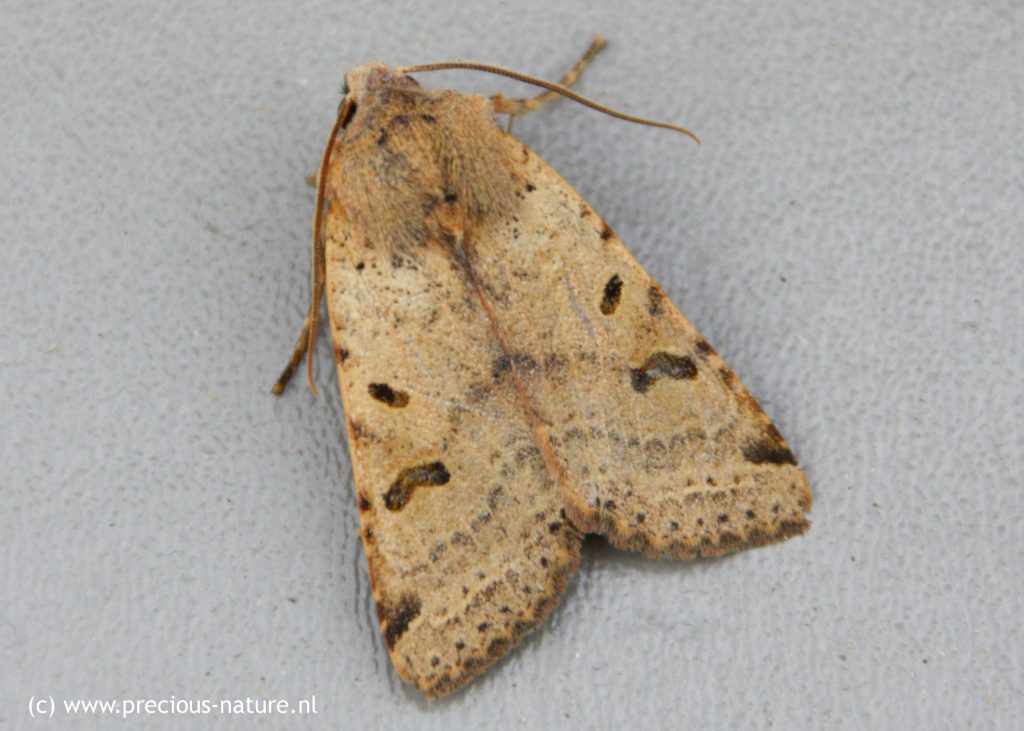 A characteristic feature of the Lunar Underwing (Agrochola lunosa) is the dark crescent-shaped central spot on the whitish, mottled hindwing. This also distinguishes this owlet moth from the similar Beaded Chestnut (Agrochola lychnidis) which has a brown hindwing where the central spot is missing. The forewing of the Lunar Underwing has a straight costa which tapers narrow but has a blunt apex. The ground color is very variable and varies from very light yellow-brown to very dark brownish-grey. Both the transverse lines and the veins are light in color and clearly visible. The wavy line consists of a series of black spots and ends close to the costa via a kink in two black arrow spots. The kidney- and oval mark are quite large, slightly rimmed, and filled dark. The flying period in one generation is from mid-August to mid-October and the wingspan is 32-38mm. Host plant: Various grasses. Dutch name: Maansikkeluil. Frisian name: – 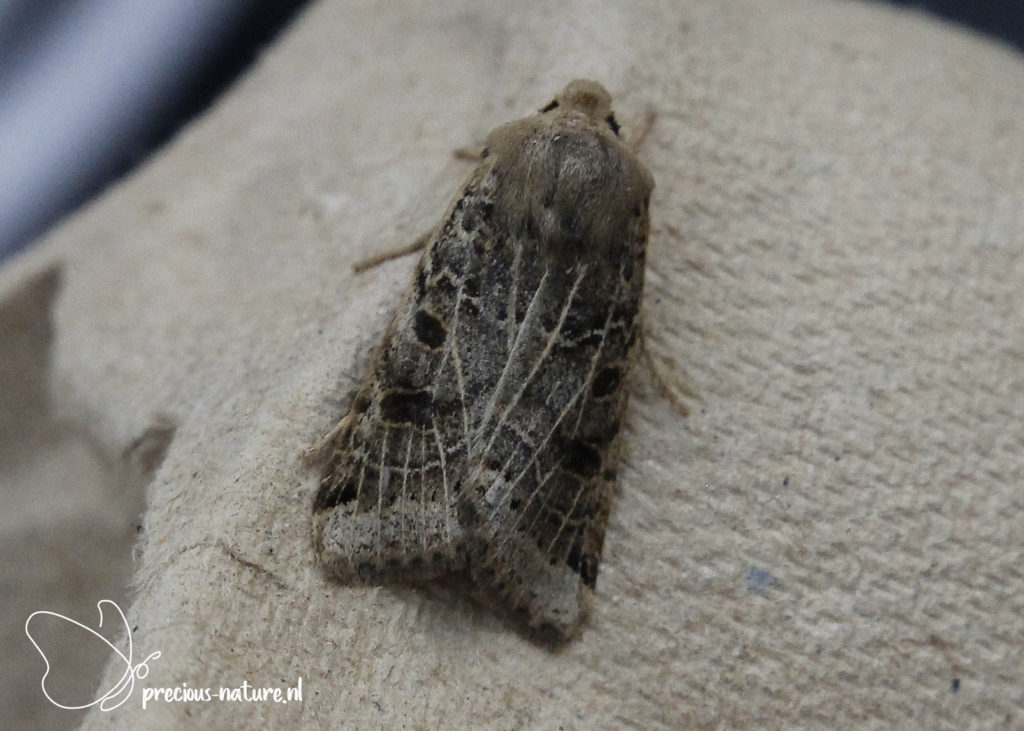 A moth that has no pronounced characteristics is the Fen Wainscot (Arenostola phragmitidis). The forewing has a solid color, grey or reddish-tinged yellow-brown color, without any markings. Closer to the marginal area, the wing becomes darker in color and the fringe dark brown. The hindwing is grey and has a lighter fringe. The wingspan is 32-36mm and the flight period is from June to early September in one generation. Host plant: Reed. Dutch name: Egale rietboorder. Frisian name: Egale Reidboarder. 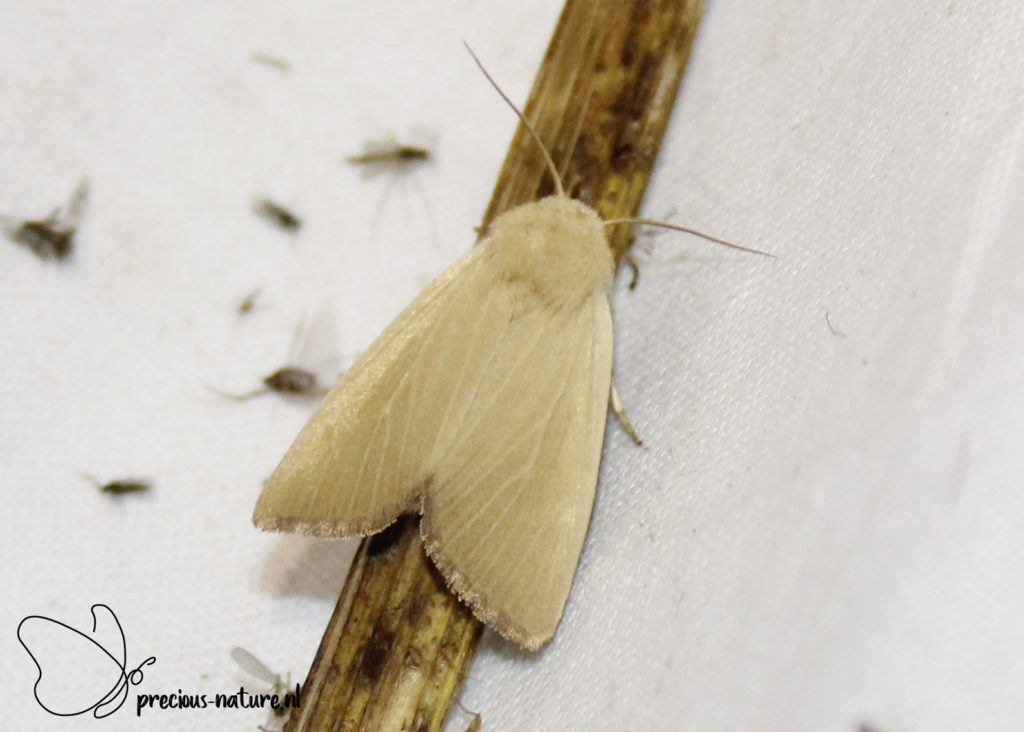 The solidly built Treble Lines (Charanyca trigrammica) has a broad, slightly tapered forewing. Characteristic is the pattern of three roughly parallel dark transverse lines on a lighter, smooth surface. The ante-median and post-median transverse lines are thin and quite sharp, and the median line is a wider diffuse line. The color of the wing is a mixture of grey or orange-brown and milky white with fine dark speckling. The costal area is often darker than the rest of the wing. The flight period is from the end of April to the end of July in one generation and the wingspan is 35-40mm. Host plant: Plantain and Dandelion. Dutch name: Drielijnuil. Frisian name: Trijelynûltsje. 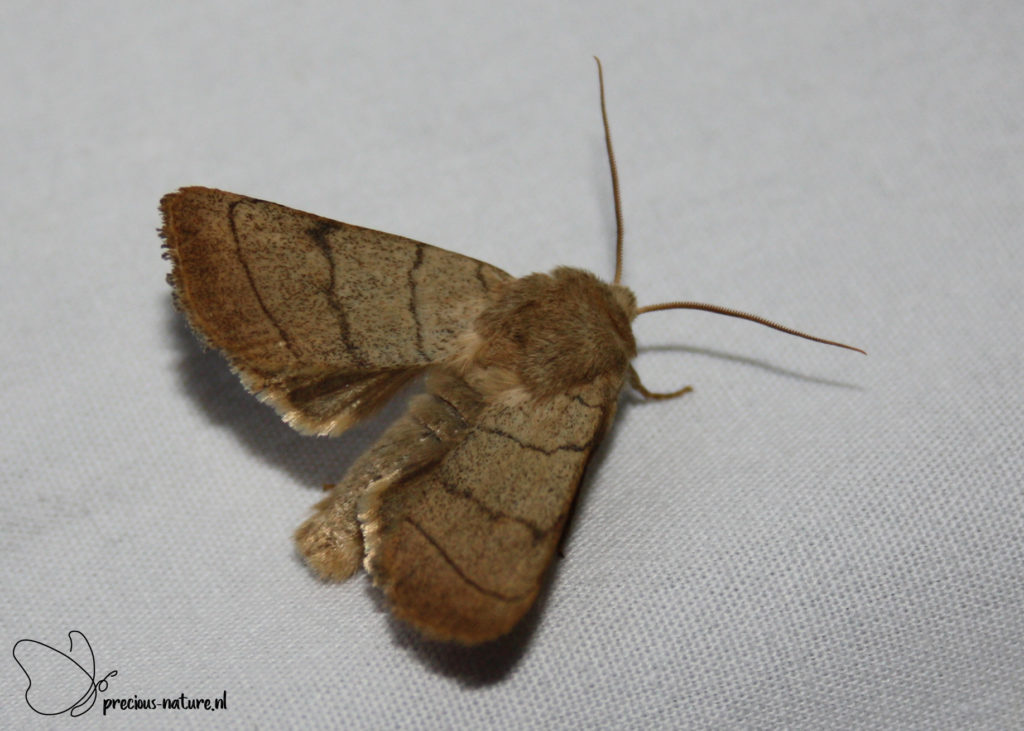 The Silky Wainscot (Chilodes maritima) is a slender owlet moth with a greyish forewing. The forewing has a curved costa that forms an almost right angle with the termen. The colors and markings are variable. Most specimens have fine grey veins and a fine black speckling. It resembles the Reed Veneer (Chilo phragmitella) and Bulrush Veneer (Calamotropha paludella), but these micro-moths from the grass moth family (Crambidae) have long palps. There are also specimens that have a striking oval and kidney mark, such as the first specimen I saw of this species. The hindwing is white. The wingspan is 29-36mm and the flying period is from June to September in one generation. Host plant: Reeds and living and dead invertebrates. Dutch name: Smalvleugelrietboorder. Frisian name: Smelwjukreidboarder.

A very recognizable and easily identifiable owlet moth is the Bird’s Wing (Dypterygia scabriuscula). The predominantly black wings have a light brown dorsum that tapers towards the inner edge in two arches into a wider brown spot against the costa. The top of the chest piece connects to the termen and is also brown and adorned with a hair-shaped crest. Near the apex is a light brown spot. The owl marks are the same color as the wing and are surrounded by a dark thin line. The flight period is from mid-April to August in two generations and its wingspan is 32-37mm. Host plant: Dock and Knotgrass. Dutch name: Vogelwiekje. Frisian name: Fûgelwjukje. 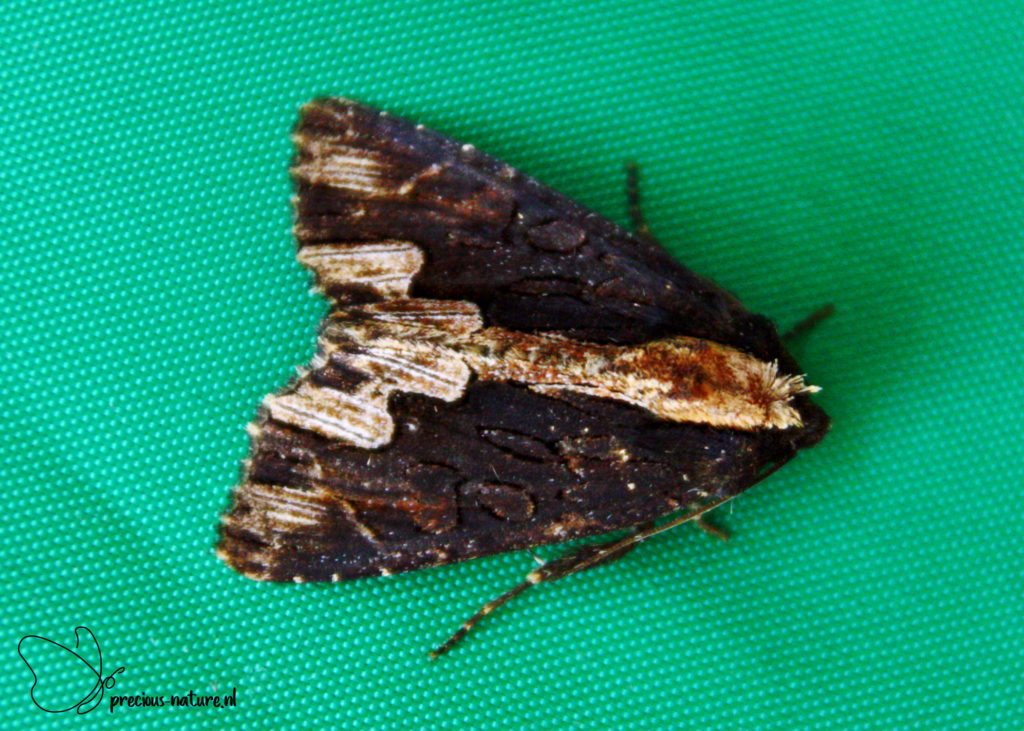 The Uncertain (Hoplodrina octogenaria) has a forewing that has a brown to yellow-brown color at the top. Characteristic is the grey speckling, which makes it look as if there is a layer of dust over the wings or whether the moth has already flown off. This was also the case with the specimen I first spotted. Two dark transverse bands run across the forewing. The inner is quite coarsely scaly while the outer has a finer shape. The small oval mark and the kidney mark are darker than the base color. It flies in one generation from May to August and the wingspan is 28-34mm. Host plant: Dock and Plantain. Dutch name: Gewone stofuil. Frisian name: Gewoan stofûltsje. 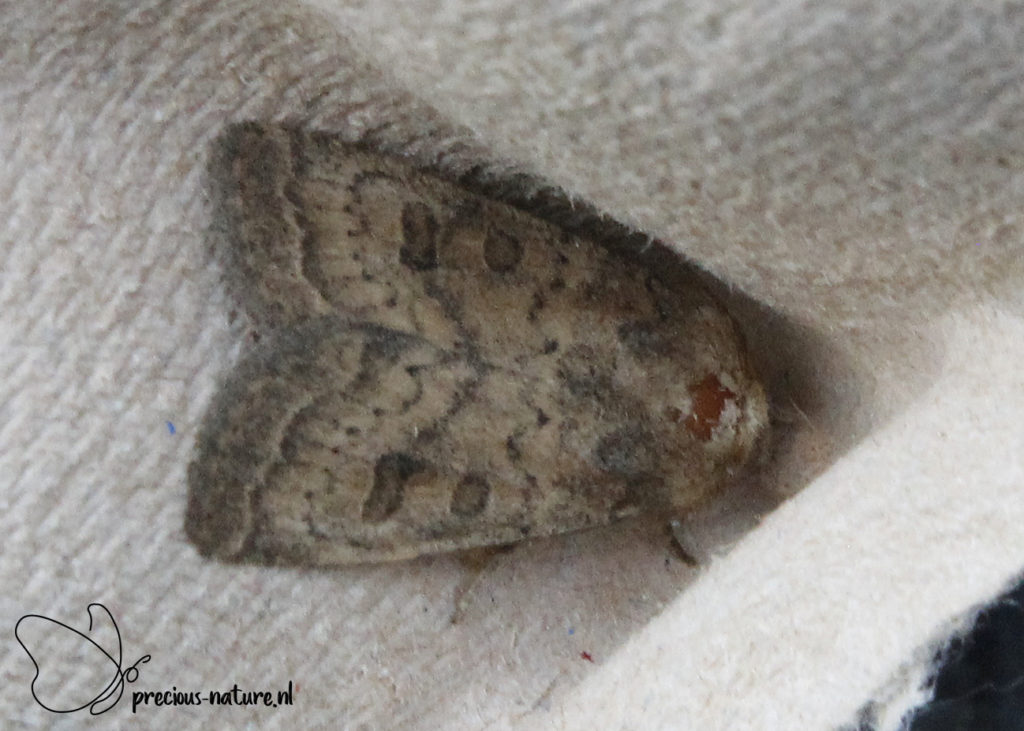 The Vine’s Rustic (Hoplodrina ambigua) is an owlet moth very similar to its immediate relatives. The forewing is light brown with grey speckles. The oval and kidney marks are clearly visible with their brown color and the white border around them. The costa of the forewing is almost straight and narrower than with the Uncertain (Hoplodrina octogenaria). Two dotted transverse lines can be seen on the top of the forewing. The flight period is from May to October in two generations and the wingspan is 32-34mm. Host plant: Dock and Plantain. Dutch name: Zuidelijke stofuil. Frisian name: – The Rustic (Hoplodrina blanda) is difficult to distinguish from a number of other relatives, in particular the Uncertain (Hoplodrina octogenaria). The post-median wavy transverse line in the Rustic consists more or less of black dots instead of a continuous line. The owl marks are larger than with the Uncertain and are white-rimmed. The flight period is in one generation from June to September and a wingspan of 31-35mm. Host plant: Variety of low plants. Dutch name: Egale stofuil. Frisian name: Gewoan stofûltsje. 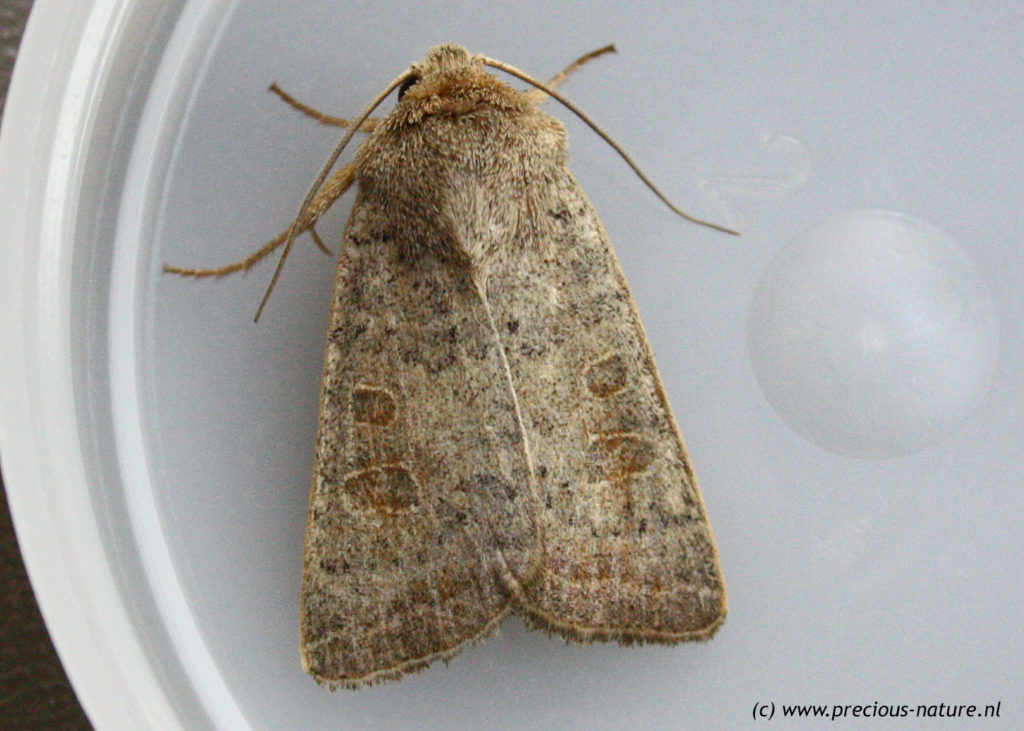 Sometimes you are not really looking for butterflies, you walk outside and you suddenly see an interesting moth. This was also the case with the Cloaked Minor (Mesoligia furucula). While I walked around the house in the afternoon, I suddenly see this sand-colored owlet moth. Despite the many variations in color and size, the Cloaked Minor is usually easy to recognize. A strikingly straight division can be seen between the inner and outer wing half. In the most characteristic shape, you can see a contrast-rich dichotomy between the dark brown inner wing half and the whitish with light brown outer half. The light ring and kidney mark are often clearly present. It can be confused with the Rosy Minor (Litoligia literosa), but this minor is larger, has no dark marginal area, and the division between the two wing halves is less clear. The wingspan is 20-24mm and the flight period runs from June to mid-September in one generation. Host plant: Sheep’s-fescue, Tufted Hair-grass, and False Oat-grass. Dutch name: Zandhalmuiltje. Frisian name: – A species that is found all over the Netherlands is the Bulrush Wainscot (Nonagria typhae). The wide forewing has a costa and termen that almost form a right angle. The apex is slightly sharper in the male than in the female. The forewing is dark brown in the male and more yellowish-brown in the female. The light veins with a black speck on both sides stand out well. A clear black smear can therefore be seen along the main vein. Along the outer margin, the light veins have a dark border and in between, there are very small black arrow spots. The black checkered fringe line is clearly visible. In very dark specimens, the three light spots along the costa close to the apex stand out well as well as the series of light spots in the fringes. The flight time in one generation is from the end of June to the end of October and the wingspan is 45-50mm. Host plant: Reedmace. Dutch name: Lisdoddeboorder. Frisian name: – 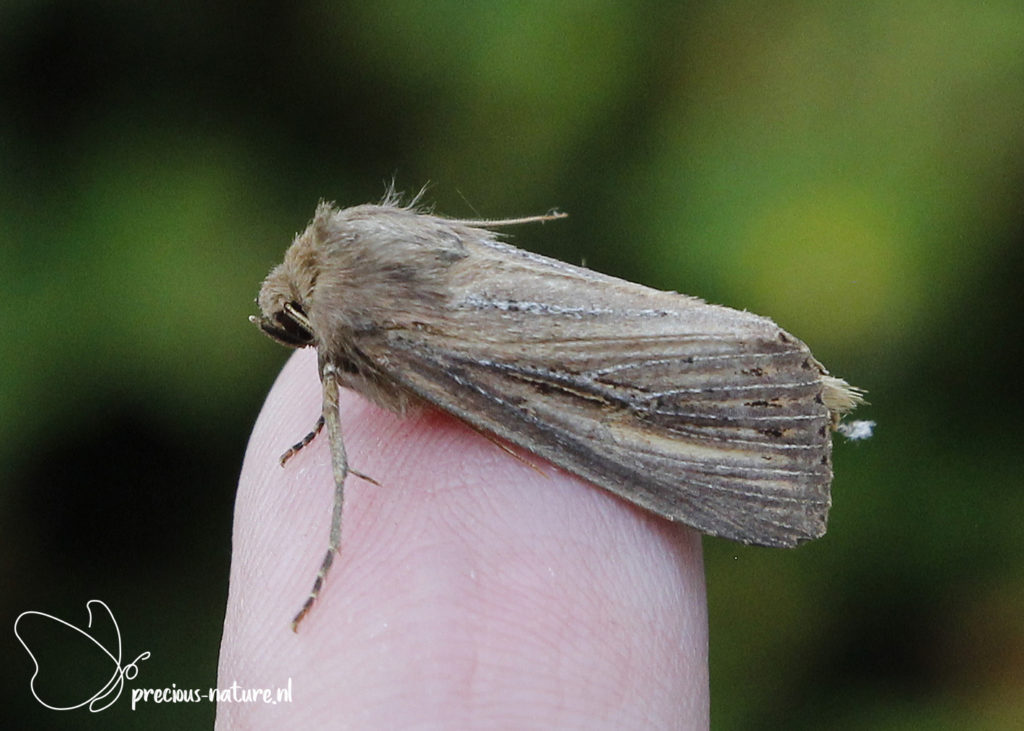 The Orache Moth (Trachea atriplicis) is a brownish-grey owlet moth with moss-green spots on the top of the forewing and a white zig-zagging transverse line. Characteristic is the slanting pinkish-white streak in the midfield. The owl marks are partly white-rimmed. The flight time is from May to October in two generations and its wingspan is 38-42mm. Host plant: Orache and Goosefoot. Dutch name: Meldevlinder. Frisian name: Mealjeflinter. 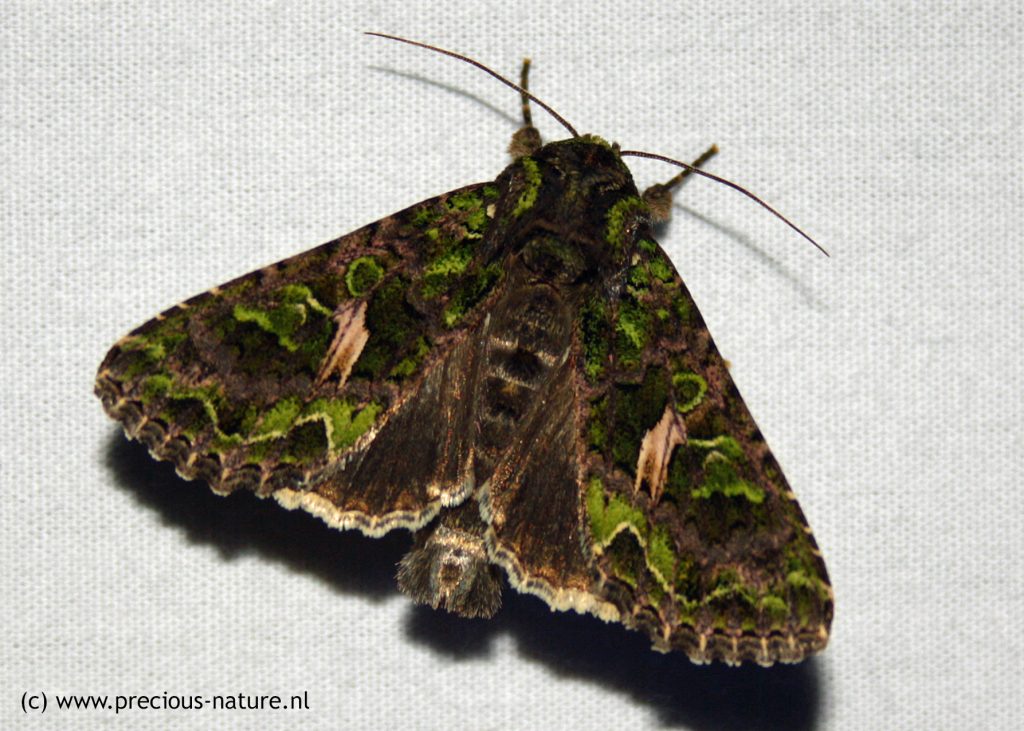 A beautiful owlet moth I discovered in the moth trap is the Dusky-lemon Sallow (Xanthia gilvago). This owlet moth has a striking dull orange-yellow or orange-brown forewing and a dark brown spotty band pattern. This pattern is sometimes reduced to a few dark spots and unclear transverse lines. The inner lobe of the kidney mark is darkly filled. The hindwing is whitish and sometimes darker at the tornus. The flight period is in one generation from late August to early November and the wingspan is 32-38mm. Host plant: Elm and various herbaceous plants. Dutch name: Iepengouduil. Frisian name: –