A number of Owlet Moths that previously belonged to the real family of Owlet Moths (Noctuidae) have been transferred to the Erebid Moths (Erebidae). At the real owlet moths, you see typically the two “owl markings”, the kidney and the oval mark. The family-changed owlet moths were an odd one out there because they don’t have those so-called “owl markings”. Other examples are the snout owlet moths that look more like a Geometer Moth when resting and which stand out due to their long protruding palps.

The Fan-foot (Herminia tarsipennalis) is a moth that is triangular when resting. The forewing is brown and has three dark transverse lines. The inner transverse line is slightly curved and makes a sharp bend at the costa towards the base. The middle transverse line is corrugated, with a central spot visible near the large bulge. As with other snout owlet moths, the long palps are protruding. The Fan-foot flies in two generations from May to October with a wingspan of 30-35mm. Host plant: fallen leaves of Beech, Oak, and Blackberry. Dutch name: Lijnsnuituil. Frisian name: – 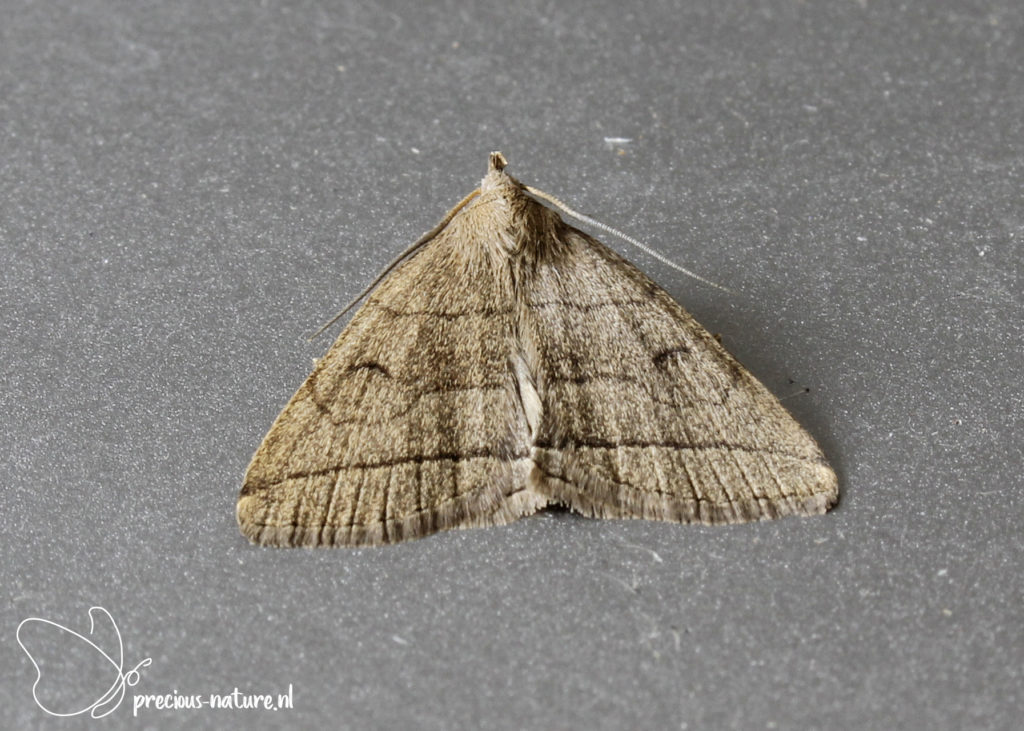 The Shaded Fan-foot (Herminia tarsicrinalis) has a lightly speckled forewing that is light brown to reddish-brown in color. The apex is slightly bending outwards. Three dark transverse lines run across the wing. The inner transverse line curves near the costa and the outer transverse line is almost straight. This is the distinctive difference from the similar Small Fan-foot (Herminia grisealis) where the outer transverse line curves towards the apex. Between the wavy median line and the ante-median line, a darker brown transverse band is visible containing the curved central spot. Like other fan-foots, the long palps stand out. The wingspan is 28-32mm and the flight period runs from May to August in one generation. Host plant: Withered leaves. Dutch name: Schaduwsnuituil. Frisian name: – 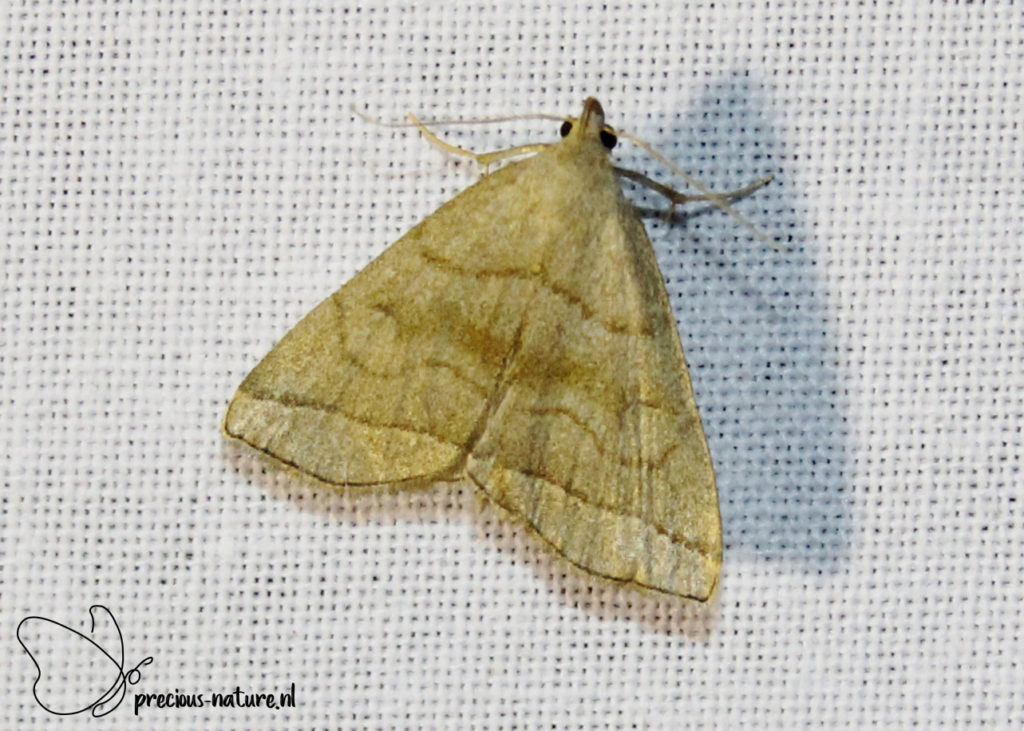 In June I had many beautiful new spots attracted to light. This also applies to the Dotted Fan-foot (Macrochilo cribrumalis). This is a white-grey to light brown-grey snout owlet moth where the wings between the veins are finely speckled black so that the wings appear white striped. Across the forewing, you can see two rows of black dots outside the striking black central dot. The palps are remarkably long and protrude in an arc. The flying period is in one generation from late May to August with a wingspan of 27-30mm. Host plant: Various grasses. Dutch name: Stippelsnuituil. Frisian name: Stippelsnútûltsje. 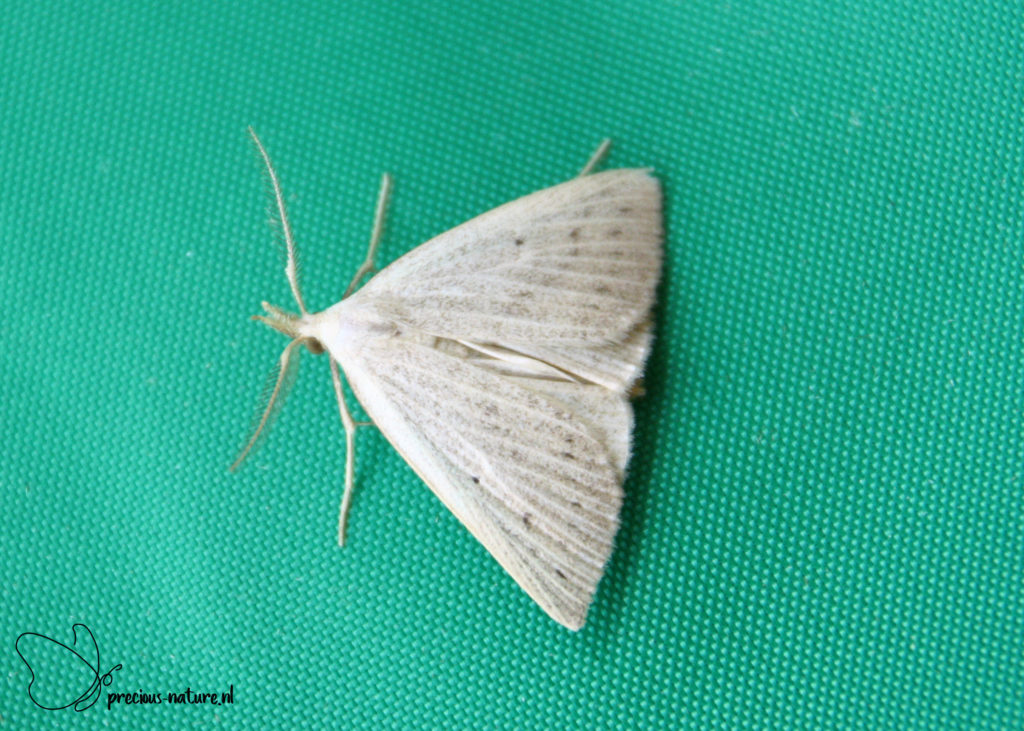 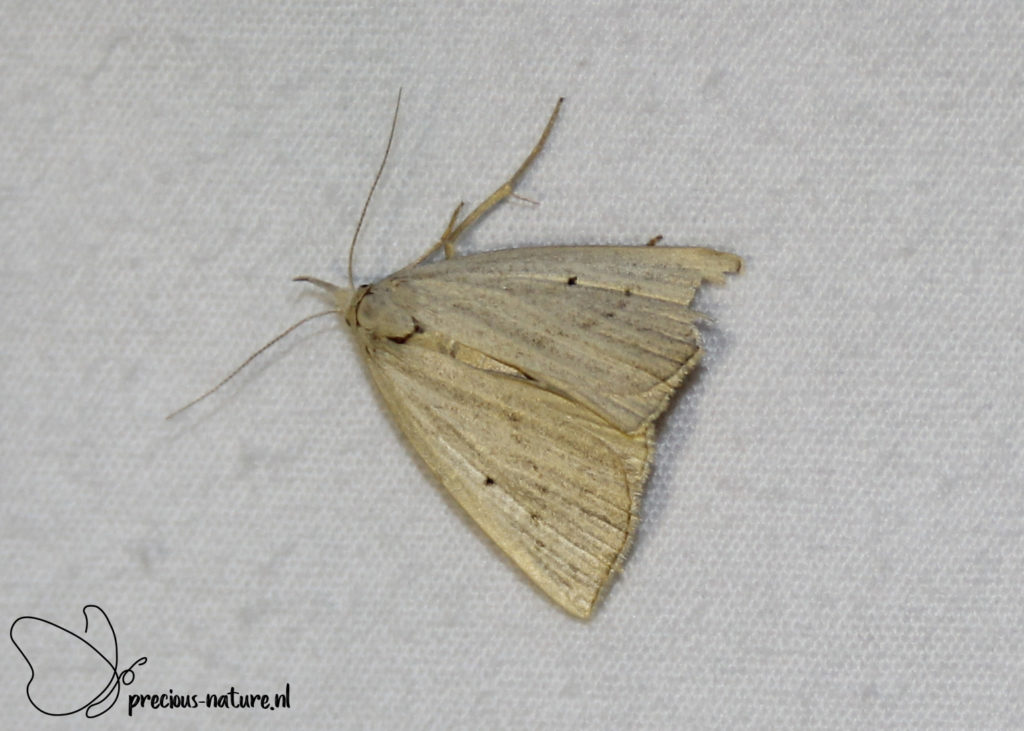 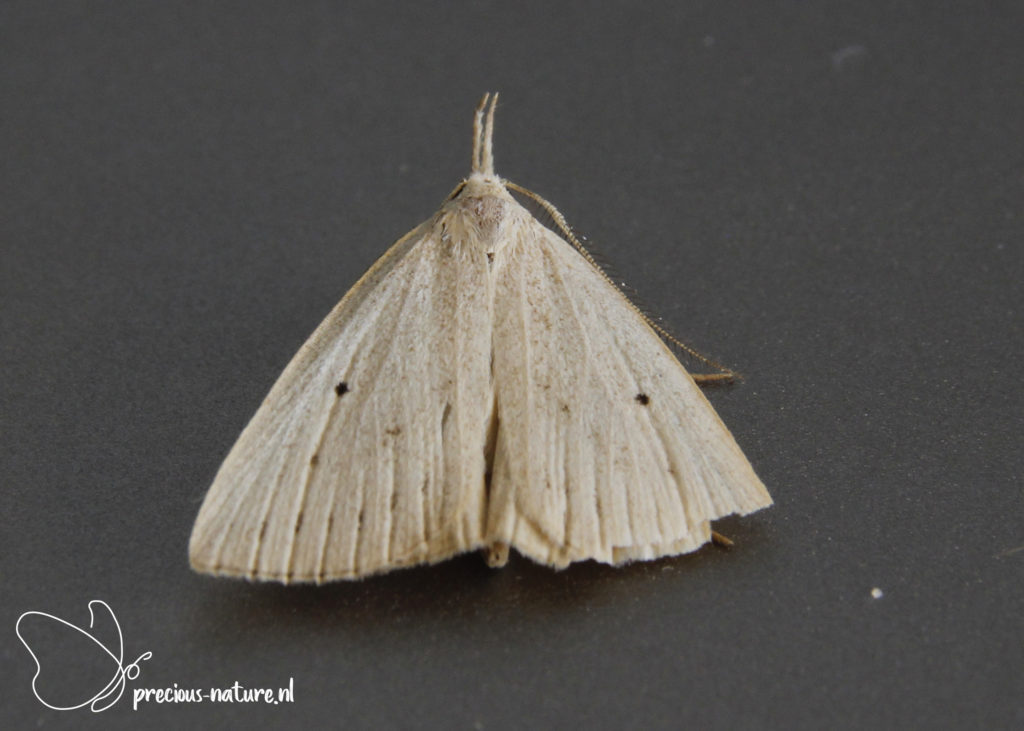 The Snout (Hypena proboscidalis) has, like other snout owlet moths, a striking snout because of the protruding palps. For the Snout, these palps are longer than for other species. The ground color of the top of the wings varies from brown to dull greyish brown or even dark purplish-brown. Two dark brown cross lines run over the wings. The hindwing is very light grey. This owlet moth flies in two generations from May to October with a wingspan of 25-38mm. Host plant: Nettle. Dutch name: Bruine snuituil. Frisian name: Brún snútûltsje. 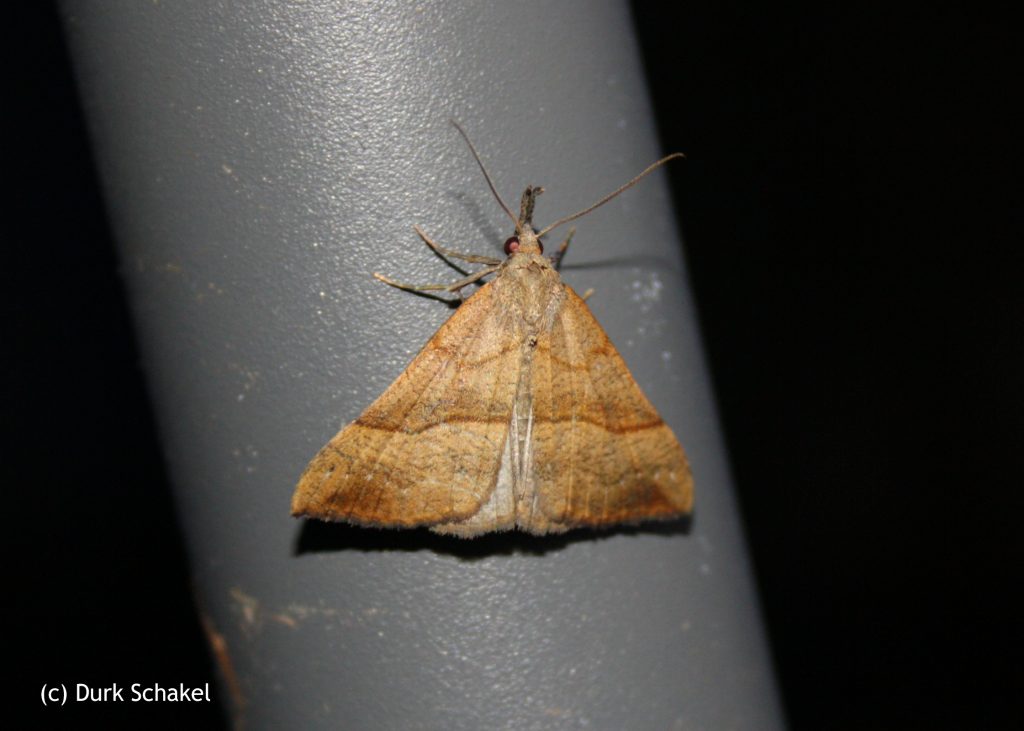 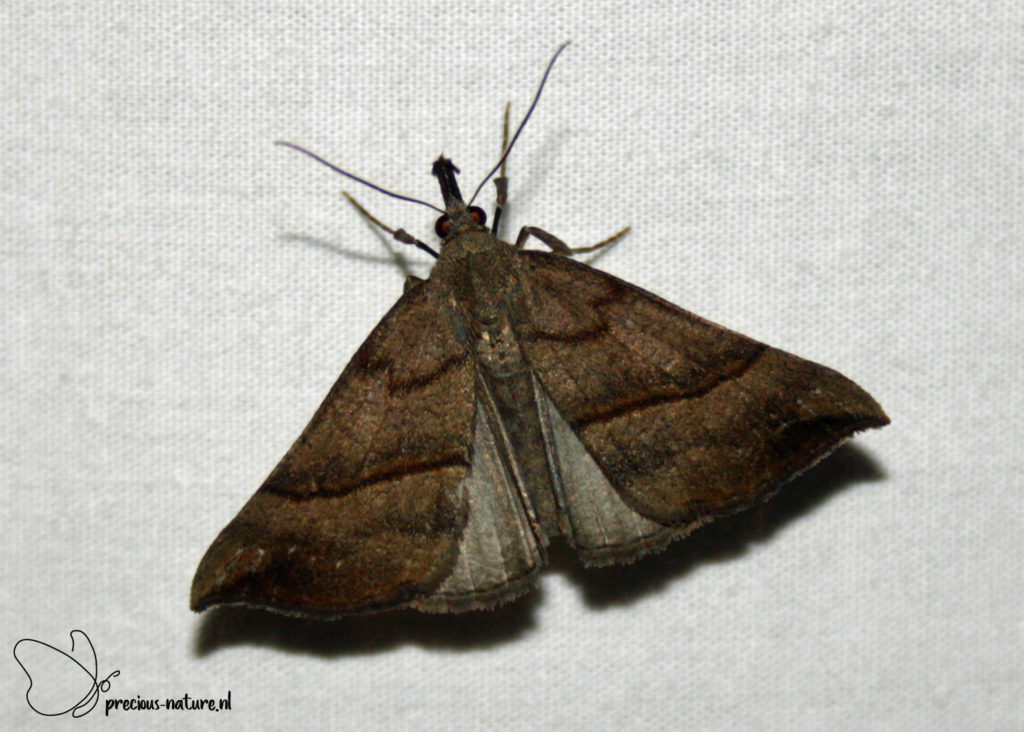 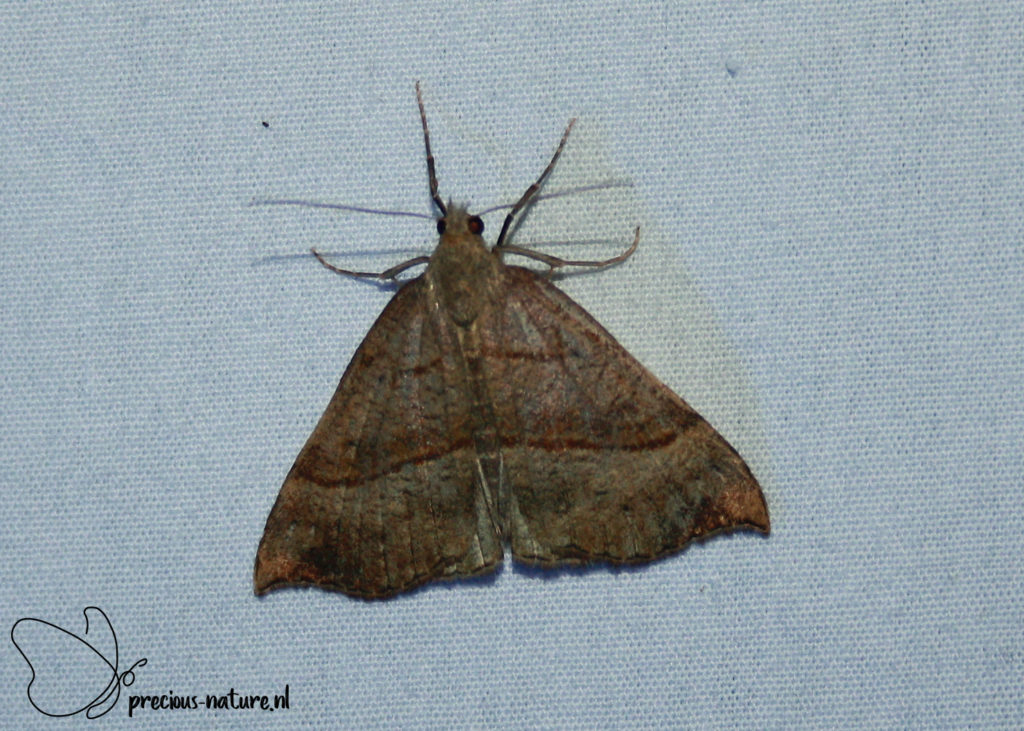 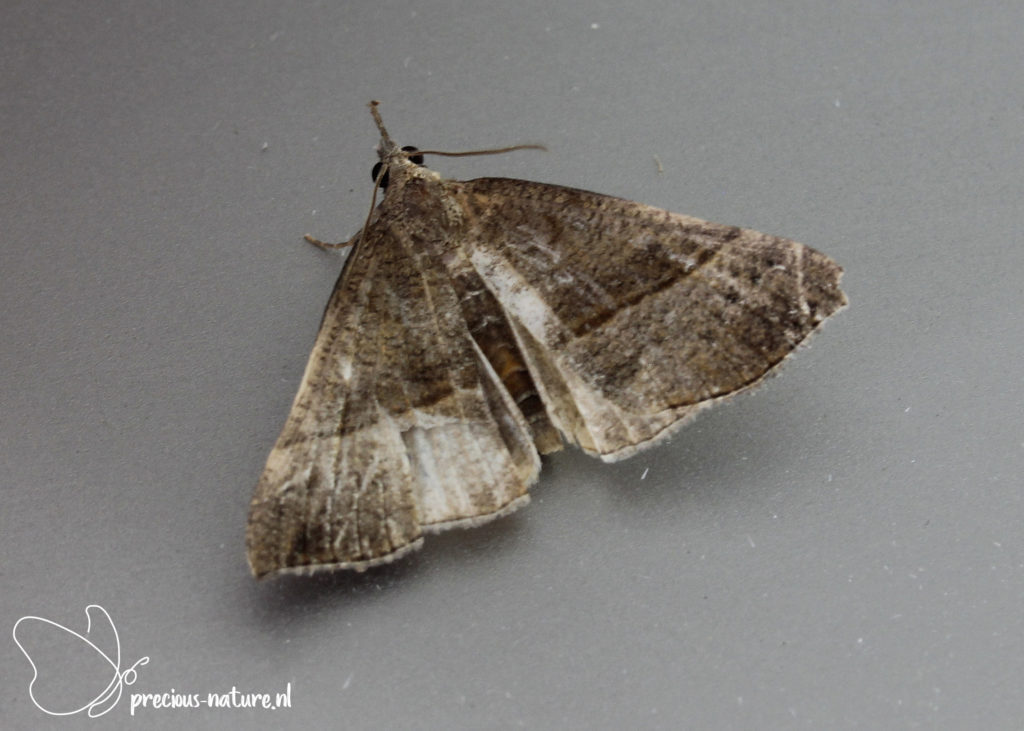 A snout that can be easily distinguished from other snout owlet moths is the Buttoned Snout (Hypena rostralis) because of its relatively narrow forewing. Usually, this owlet moth has a light brown ground color with an alternating pattern of dark spots. Often the inner half of the wing is darker than the rest of the forewing. In the midfield, you can see a narrow dark stripe on the more marked specimens between the small round oval mark and the center spot, through which a kind of ‘buttonhole’ can be seen. A dark, slightly offset transverse line is often visible halfway through the forewing. As with other snout owlet moths, this owlet moth has a distinctive ‘snout’ due to the long palps. The flight period is from March to June and again from the end of July to October and the wingspan is 27-32mm. Host plant: Hop. Dutch name: Hopsnuituil. Frisian name: – 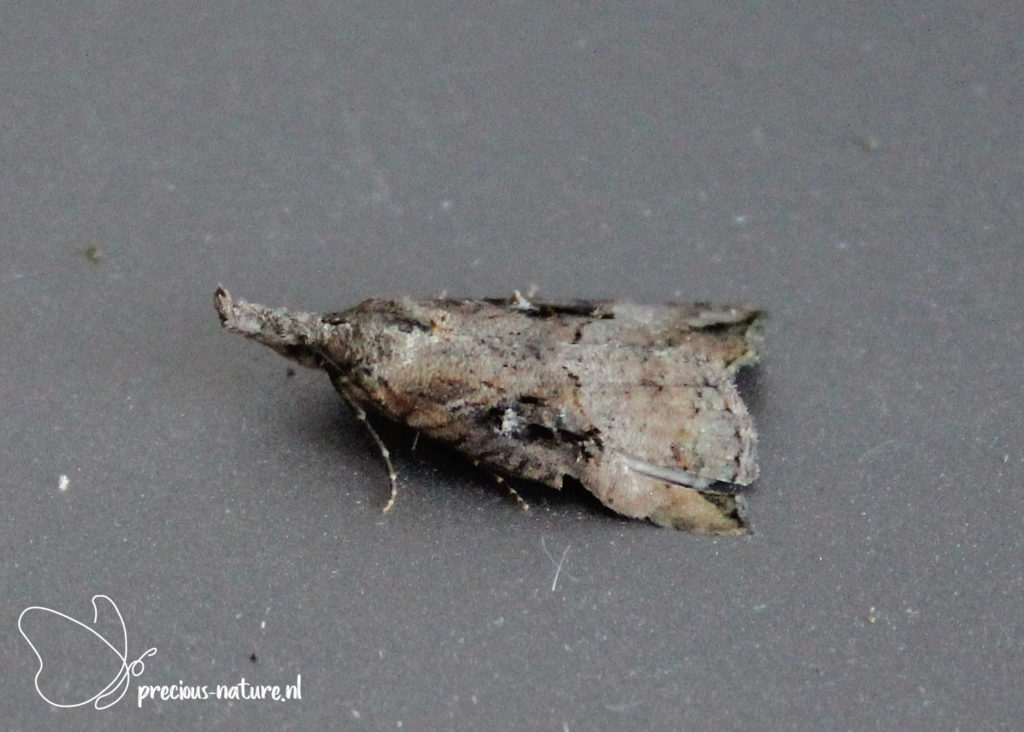 The Straw Dot (Rivula sericealis) looks like a triangle when resting. The forewing is straw-colored with a brown dorsum and fringe. The wing clearly shows a purple central spot with two small black dots. He flies in three generations from May to October with a wingspan of 18-22mm. Host plant: Various grasses. Dutch name: Stro-uiltje. Frisian name: Strieûltsje. 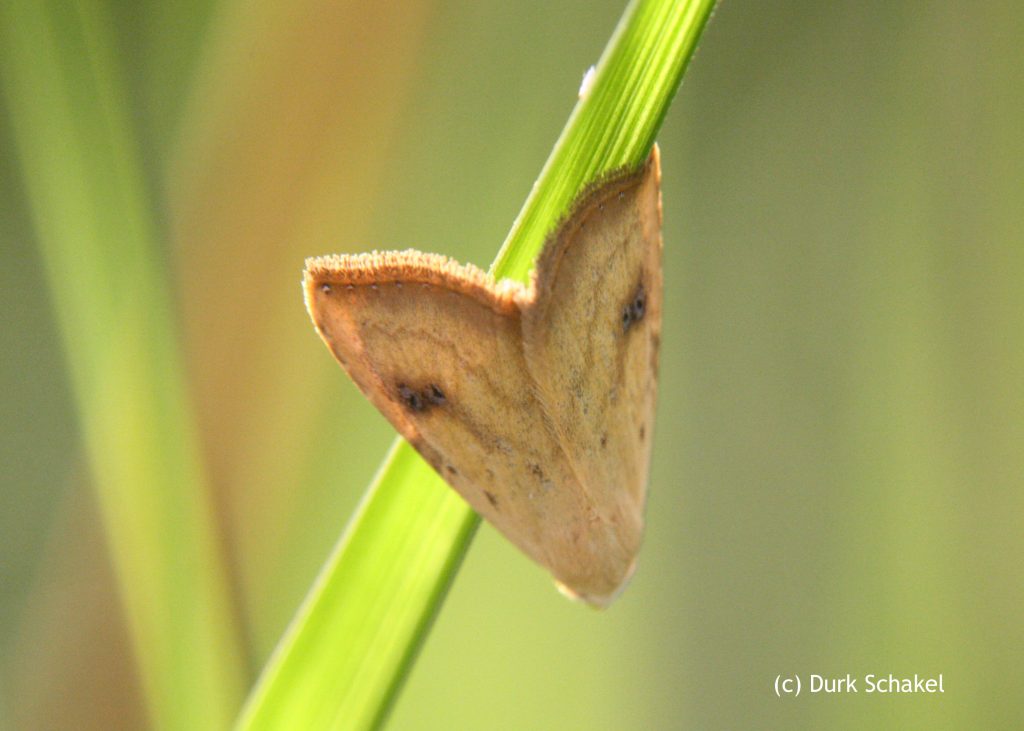 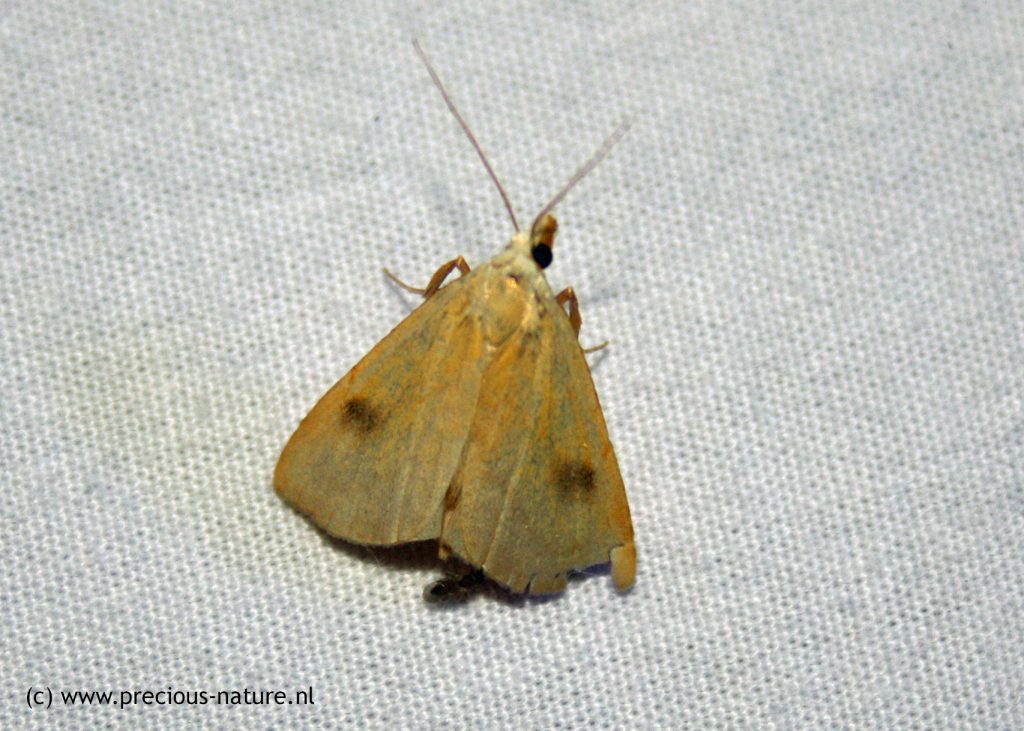 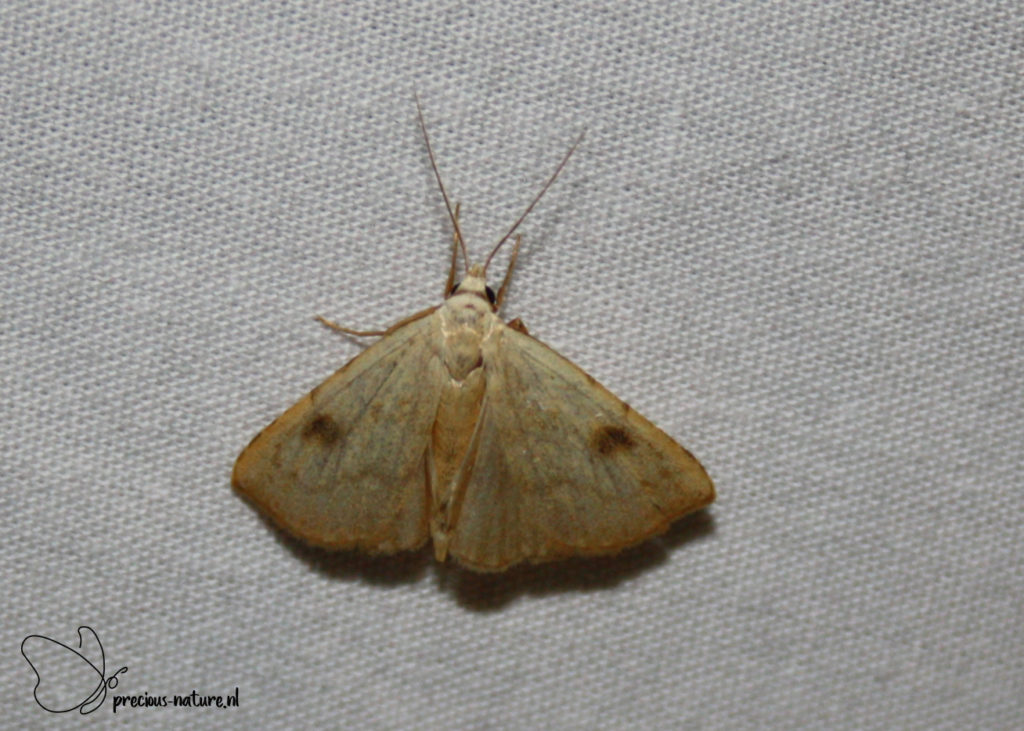 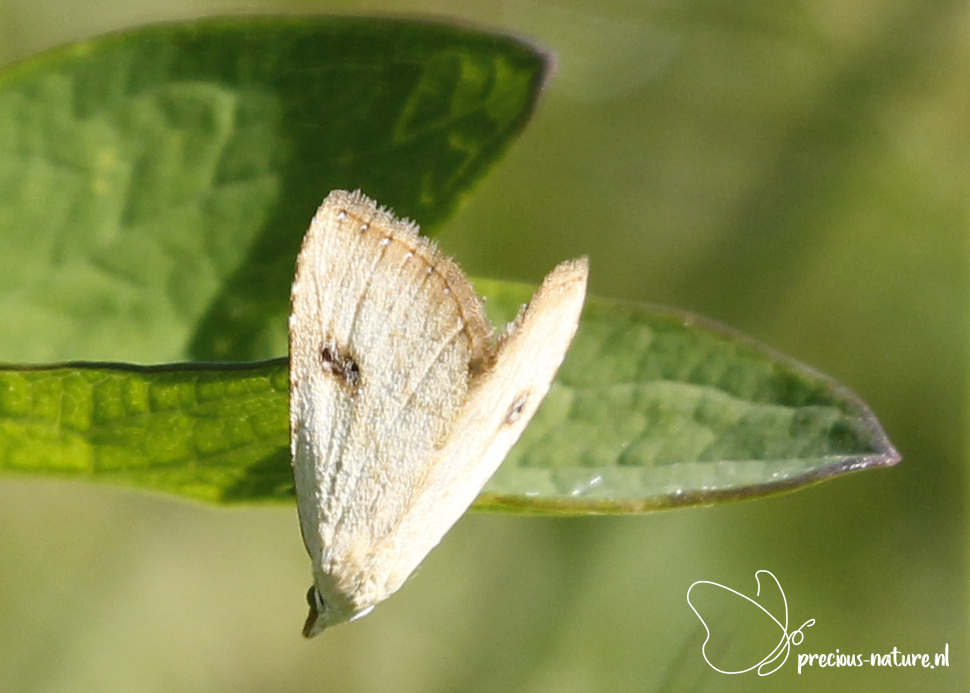 What you do not expect directly from the Marsh Oblique-barred (Hypenodes humidalis) is that this owlet moth belongs to the Erebid Moths and thus to the macro-moths. You would rather expect it to be a micro-moth. Characteristic are the oblique transverse lines across the wing. The transverse line seen halfway across the wing appears to cut a marking halfway through. In principle, the cross-line goes around it. In the resting position, the transverse lines appear to be inverted ‘V’s. The spot at the center of the wing is strikingly black with a white deposit on one side. The flight period is in two generations from May to October and the wingspan is 14-15mm. Host plant: Rushes and sedges. Dutch name: Moeras-micro-uil. Frisian name: –