Scopariinae is a subfamily of the Grass Moths (Crambidae). They are small, triangular winged, and grey. They rest on trees, walls, or rocks.

The Pied Grey (Eudonia delunella) is a Grey that is difficult to distinguish from the other species. Identification is based on the black spots on the top of the forewing. The most characteristic is the black spot where the X can be seen in the Greys. They fly from dusk and the flying period in one generation is from July to September. The wingspan is 17-18mm. Host plant: Mosses and algae on fruit trees. Dutch name: Zwartvlekgranietmot. Frisian name: – 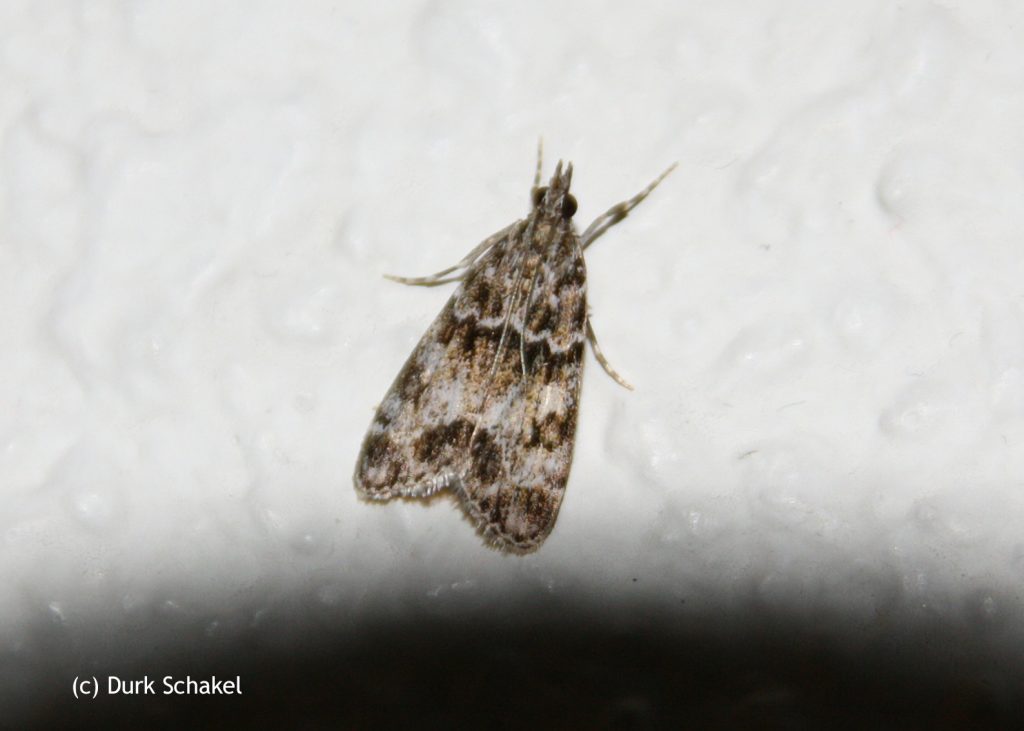 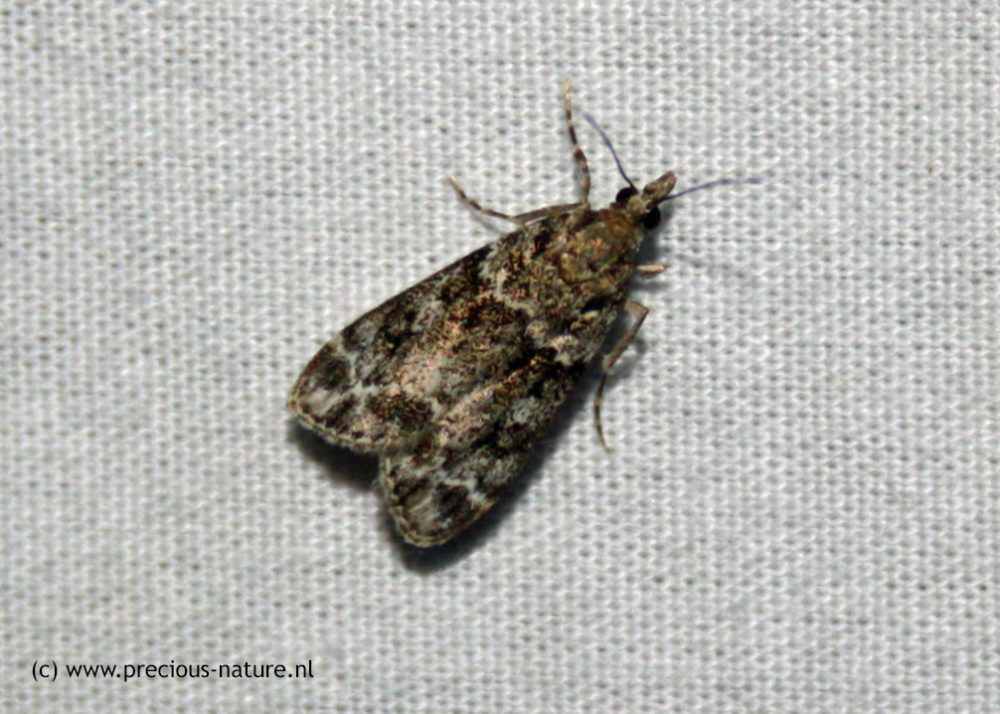 To identify Greys, genitalia testing is often necessary to make the final decision about which species you have in front of you. For the Small Grey (Eudonia mercurella), determination on the basis of the markings is often sufficient. The forewing is whitish and variably darkly speckled. On 1/3 and 2/3 is a white transverse line and a white broader arch line can be seen at the wing edge that forms a cross with the transverse line at 2/3 of the wing. A black “X” is also visible on 2/3. The flying period is from June to September in one generation and the wingspan is 16-19mm. The larvae feed in a silk cocoon amongst the moss. Host plant: Mosses. Dutch name: Variabele granietmot. Frisian name: – 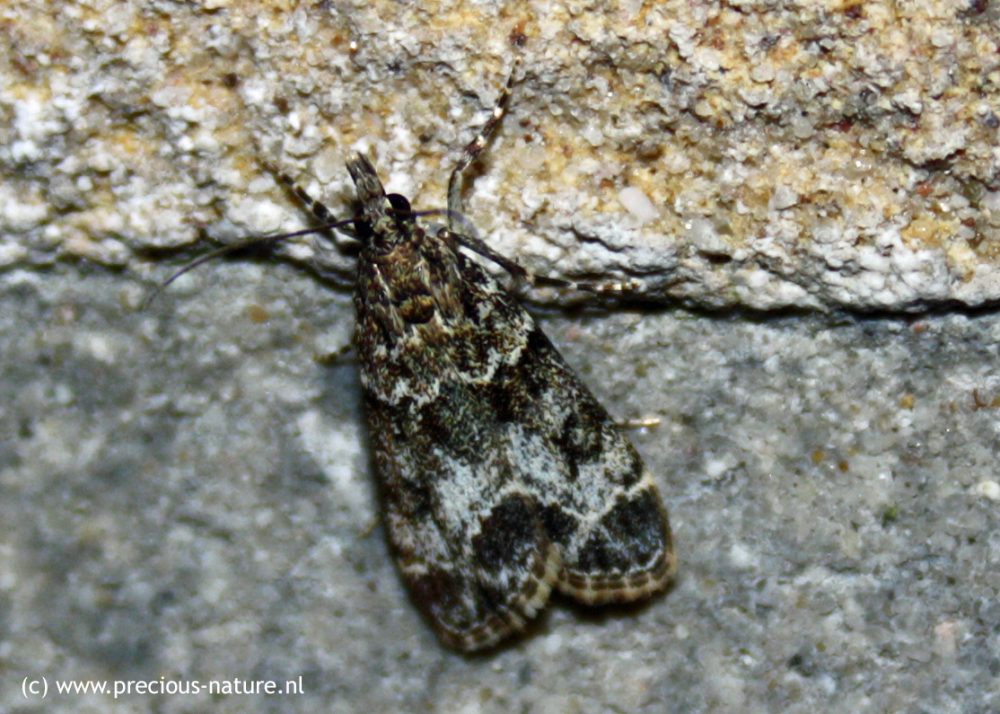 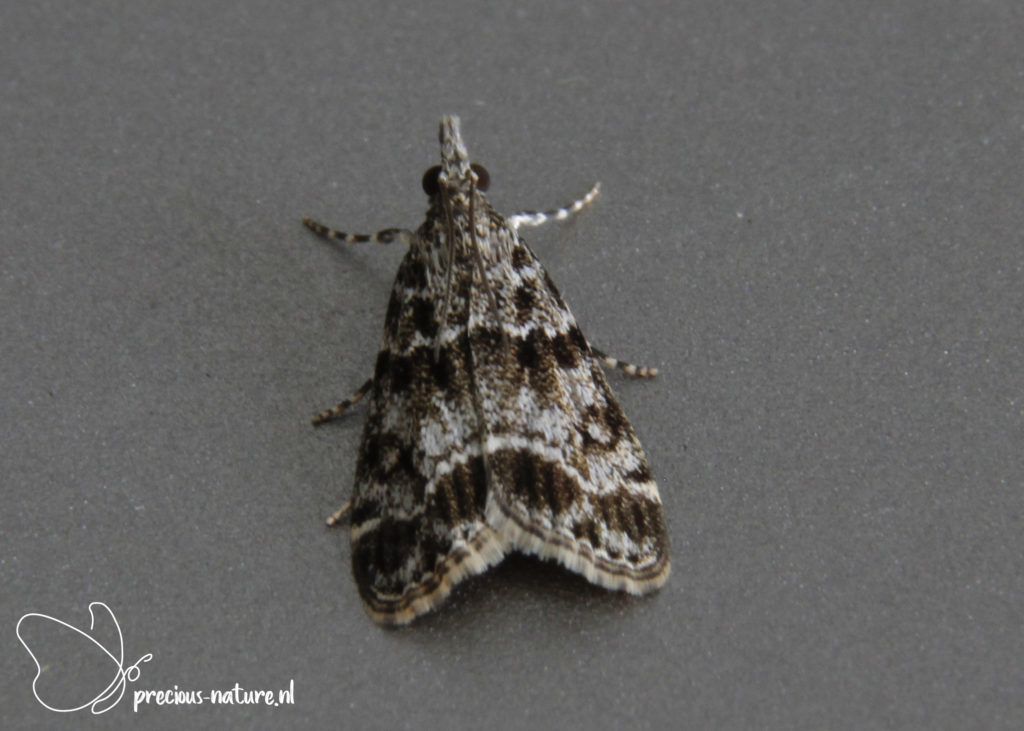 Greys are hard to identify, but if you pay attention to specific features, you can get out pretty well. The Little Grey (Eudonia lacustrata) is such a moth that I think I have been able to make a good identification. The forewing has a white to yellow-brown base color and is dark speckled. On 1/3 are black transverse lines with two black spots just beyond. On 2/3 you can see a black X with a striking white spot on the inside. The middle part of the forewing is usually pale in color, yellowish-brown, or sometimes whitish. The flying period in one generation is from May to August and the wingspan is 15-20mm. The larvae feed in a silk web amongst the moss. Host plant: Mosses. Dutch name: Lichte granietmot. Frisian name: – 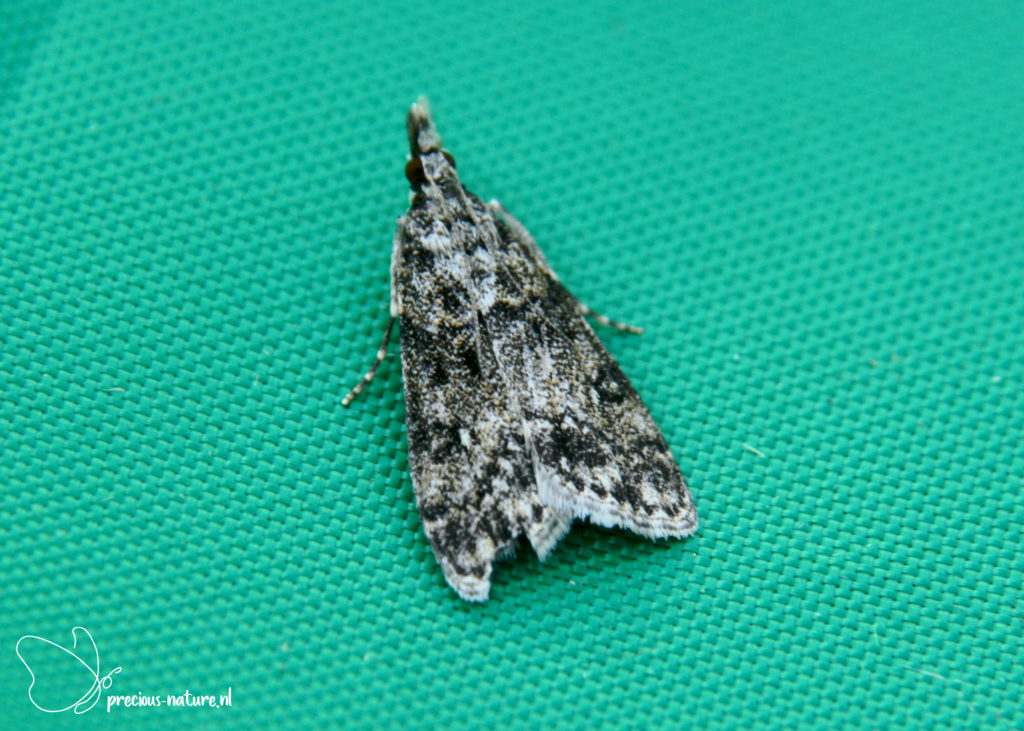 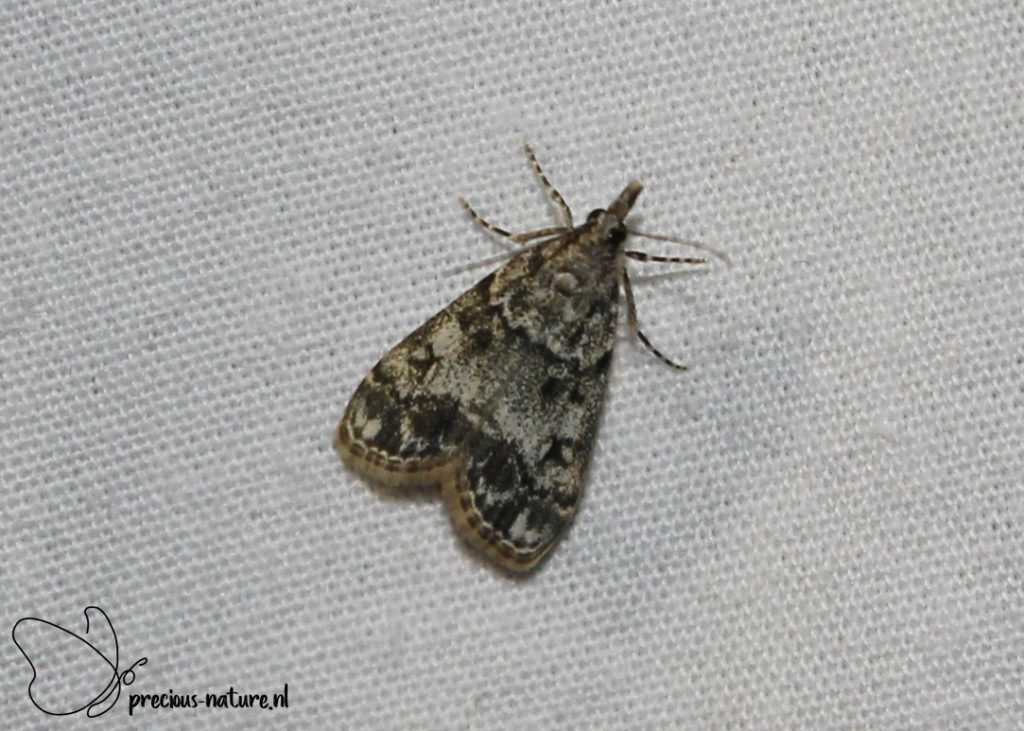 The Common Grey (Scoparia ambigualis) is a difficult species to identify. The Greys are very similar. The Common Grey has a dark row of continuous dots in a resting form as a transverse line close to the wing base. In addition to the otherwise grey ground color, a kind of black cross can be seen at the wing edge halfway down the wing. The flight time is probably in one generation from May to July and they are mainly discovered on tree trunks or stones during the day. The wingspan is 15-22mm and the larvae are found in silk tubes deep in the moss. Host plant: Mosses. Dutch name: Vroege granietmot. Frisian name: – 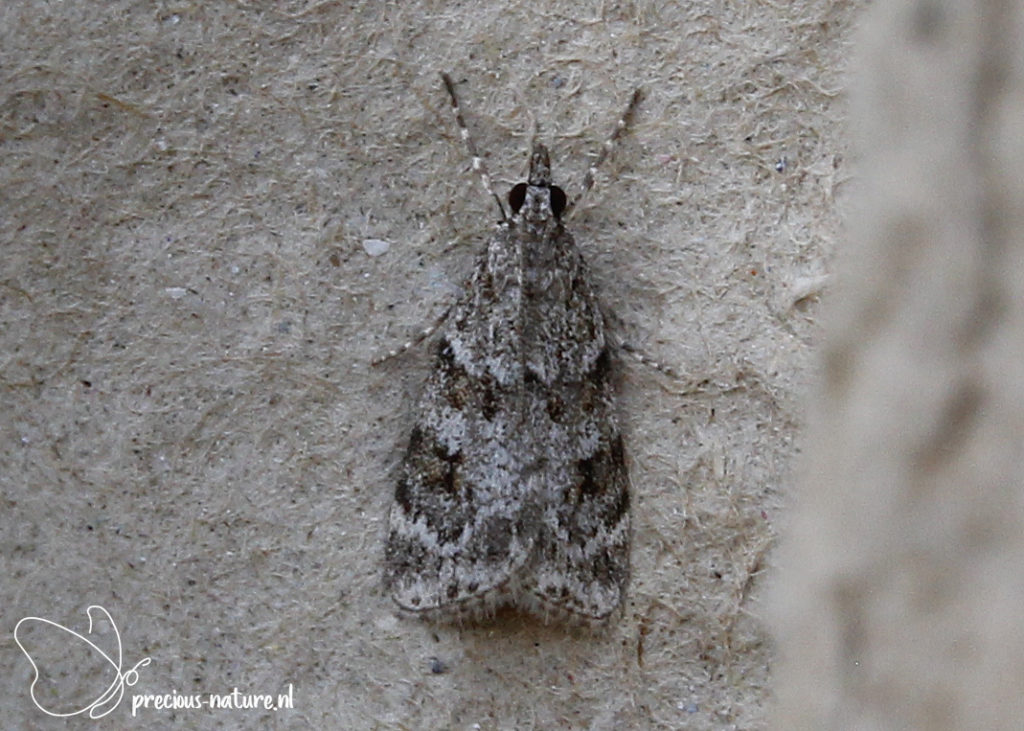 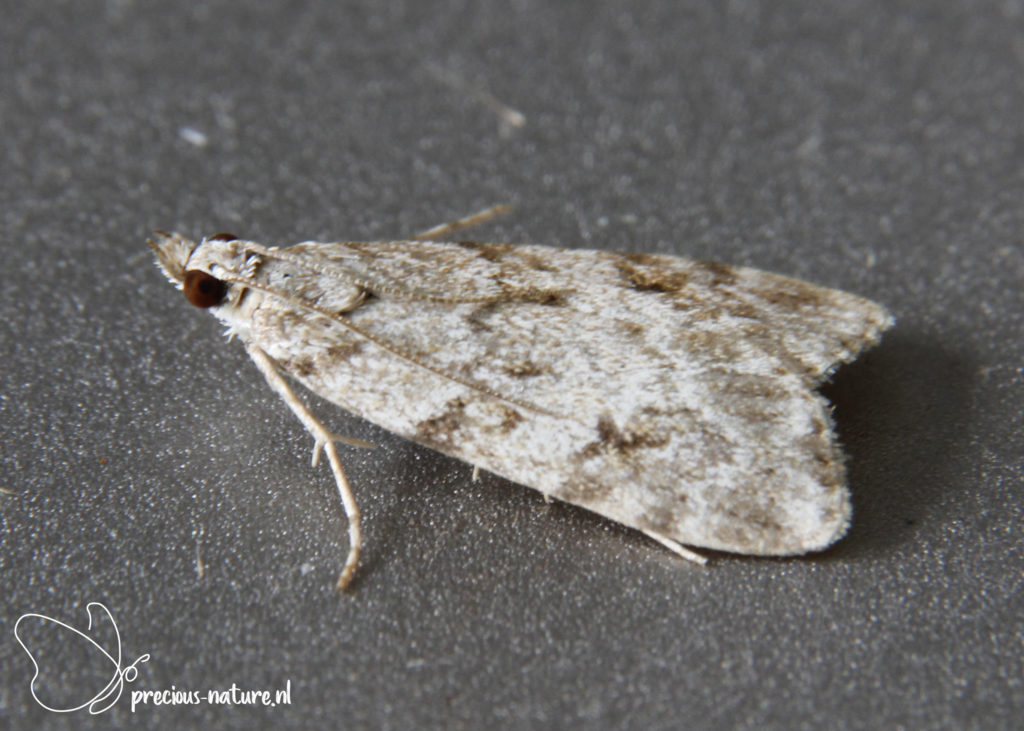 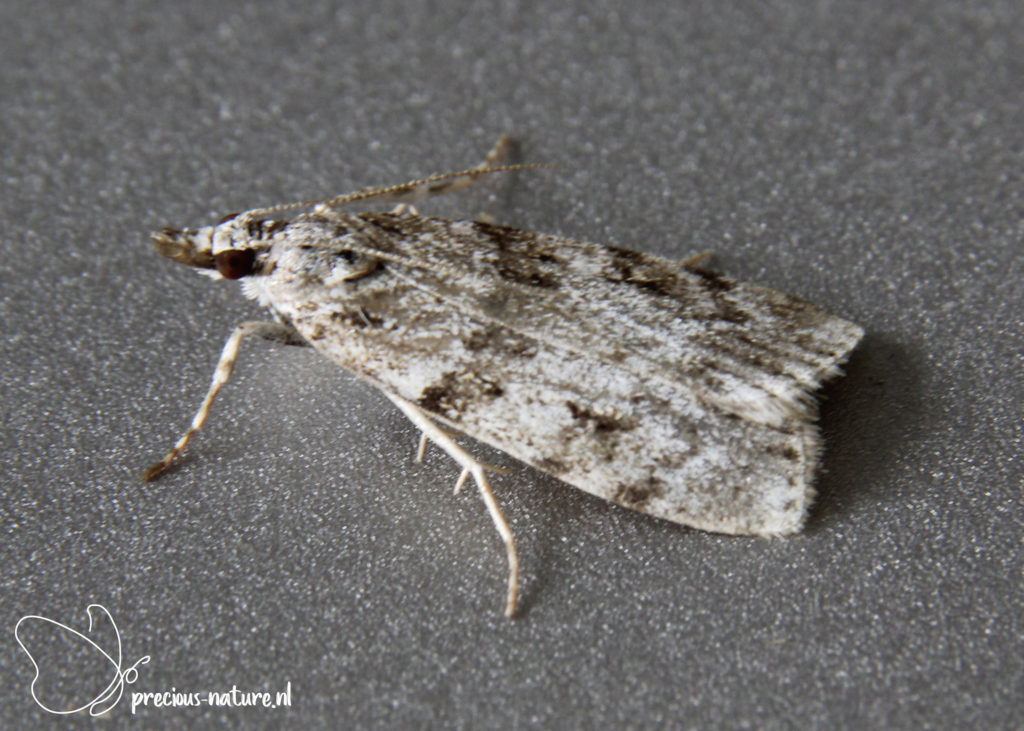 The Base-lined Grey (Scoparia basistrigalis) has a long and wide forewing with a blunt apex. It is greyish-white, often with a light yellow to brown glow, and is fairly dark grey to black speckled. Whitish transverse lines can be seen on a third and two-thirds of the wing. A black spot or blurry X is visible between the first two transverse lines. It rests on tree trunks during the day and flies at night where he is attracted to light easily. The Base-lined Grey flies in one generation from June to September and has a wingspan of approximately 21mm. The larvae feed in a thin silk web. Host plant: Mosses. Dutch name: Scherpe granietmot. Frisian name: – 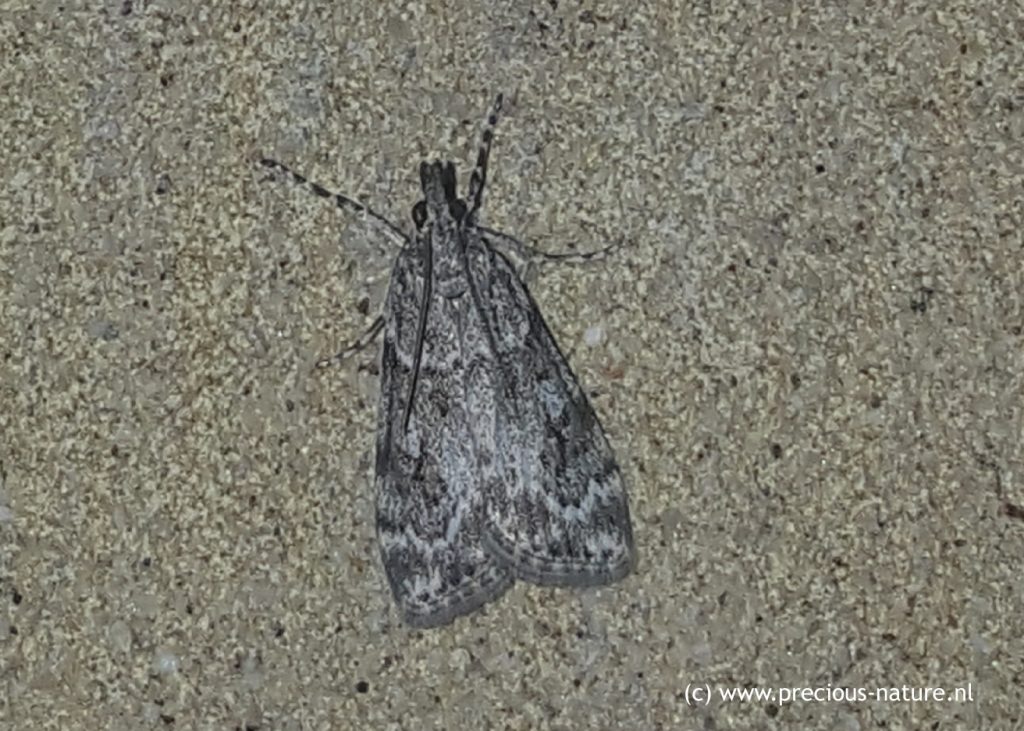 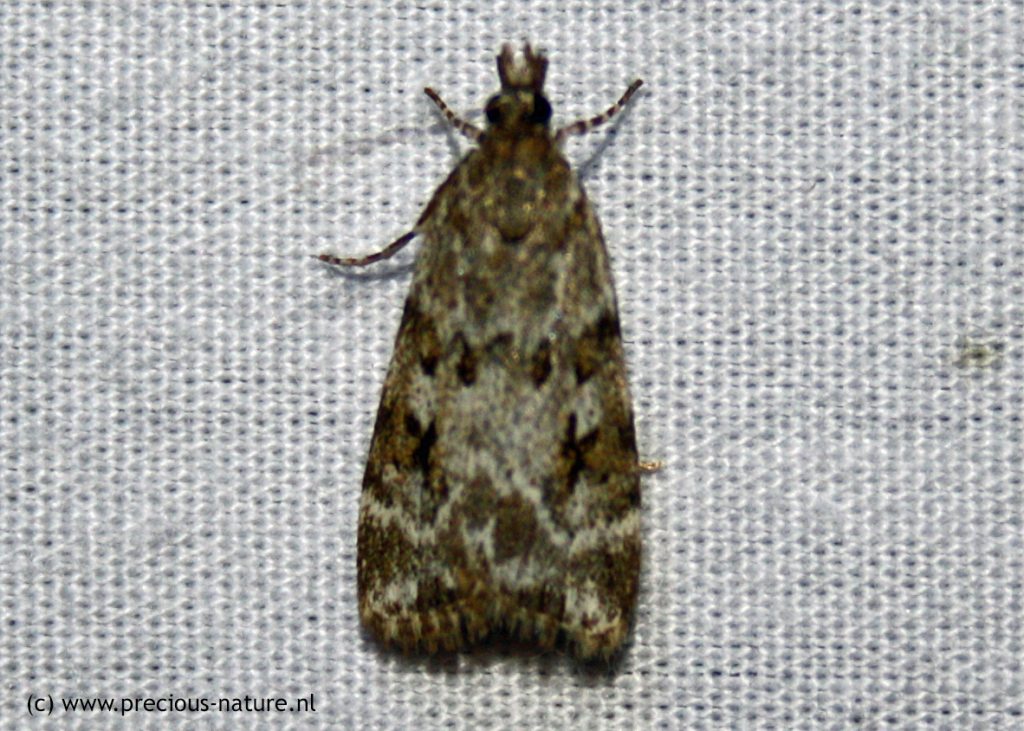