Acronictinae is a subfamily of the Owlet Moths (Noctuidae). The forewing is mottled grey, brown and white, and sometimes yellow and green and decorated with black veins. The head and chest are hairy and the eyes are free of hair. In some varieties, the black designs are in the shape of a trident or as a letter of the Greek alphabet (psi). The adult moths have most of the characteristics in common, making identification difficult.

The Sycamore (Acronicta aceris) has a wide forewing and a light grey ground color. The wing is speckled brown-grey with an S-shaped transverse line. On the inside of this cross line is a narrow band of small light-colored blocks. A black stripe is usually visible at the base of the forewing. It flies in one generation from May to August and the wingspan is 34-45mm. Host plant: Horse-chestnut, Sycamore, and Field Maple. Dutch name: Bont schaapje. Frisian name: Bûnt skiepke. 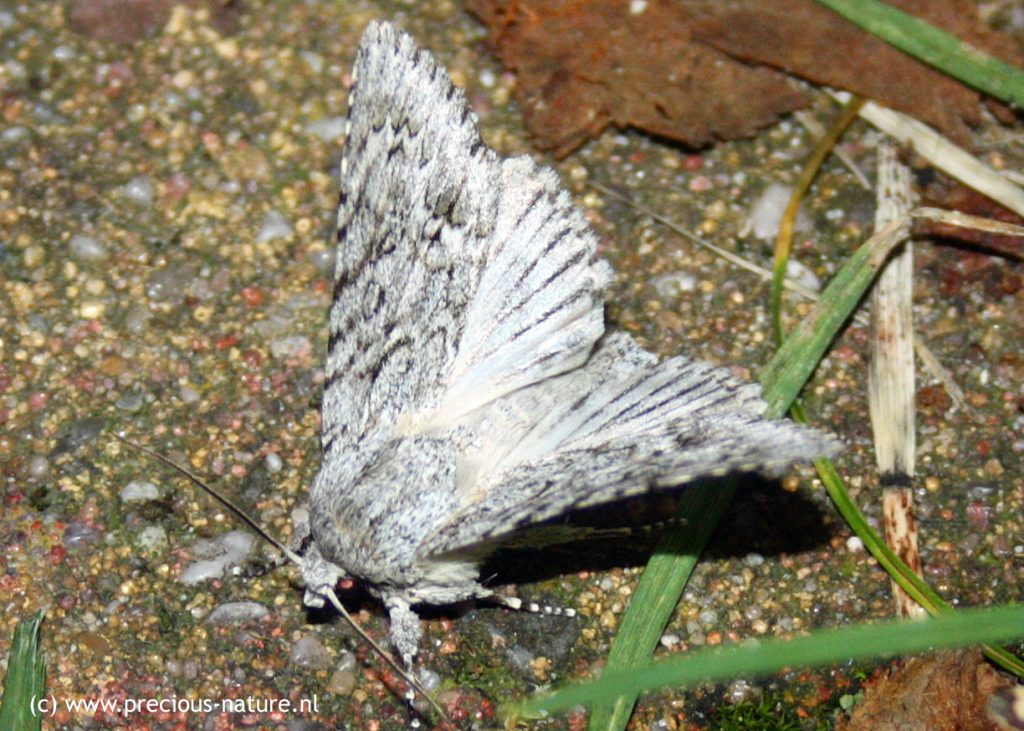 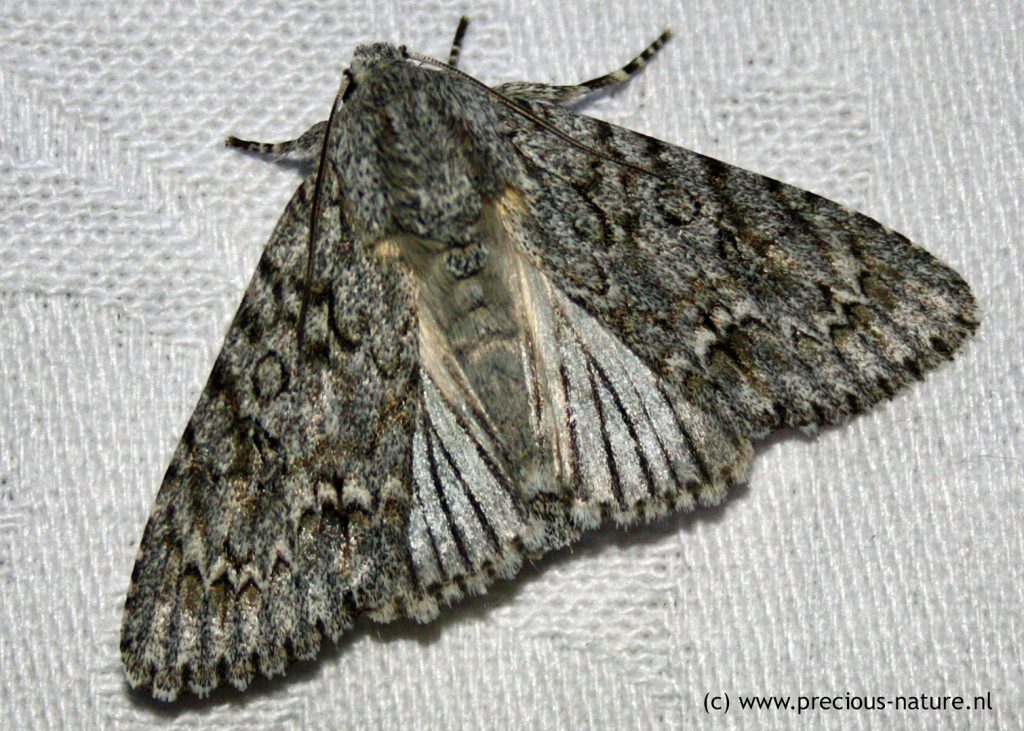 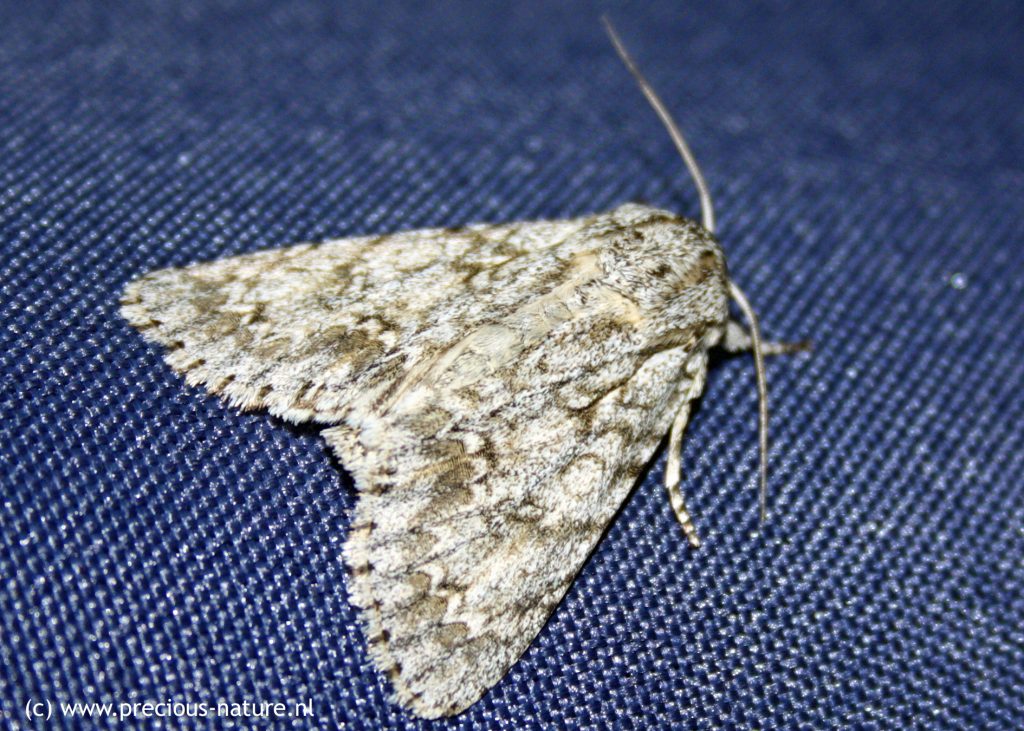 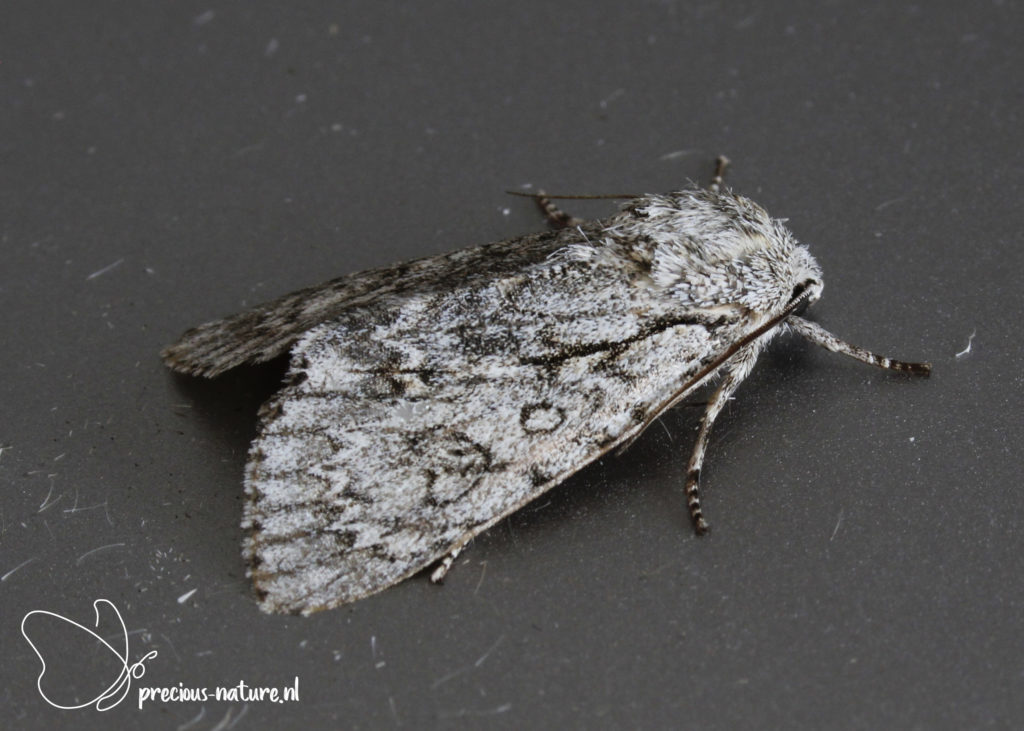 The Miller (Acronicta leporina) is most notable for its white ground color and the markings on the chest piece. When you look at it, it looks like you see the head of a sheep. The white wings have fine grey pollination. Near the almost inconspicuous white kidney mark, a black drawing can be seen in the marginal area in the shape of an ‘S’. In addition, black ‘V’-shapes can be seen on the wings. The flight period is from May to October in two generations and the wingspan is 35-45mm. Host plant: Birch and Alder. Dutch name: Schaapje. Frisian name: Skiepke. 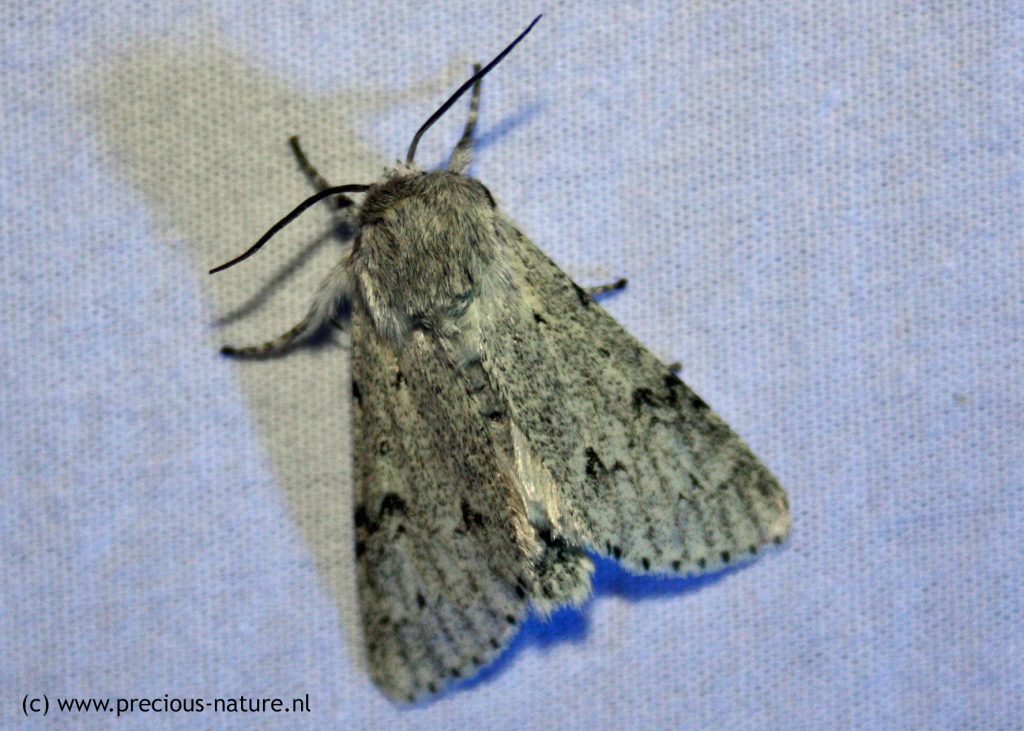 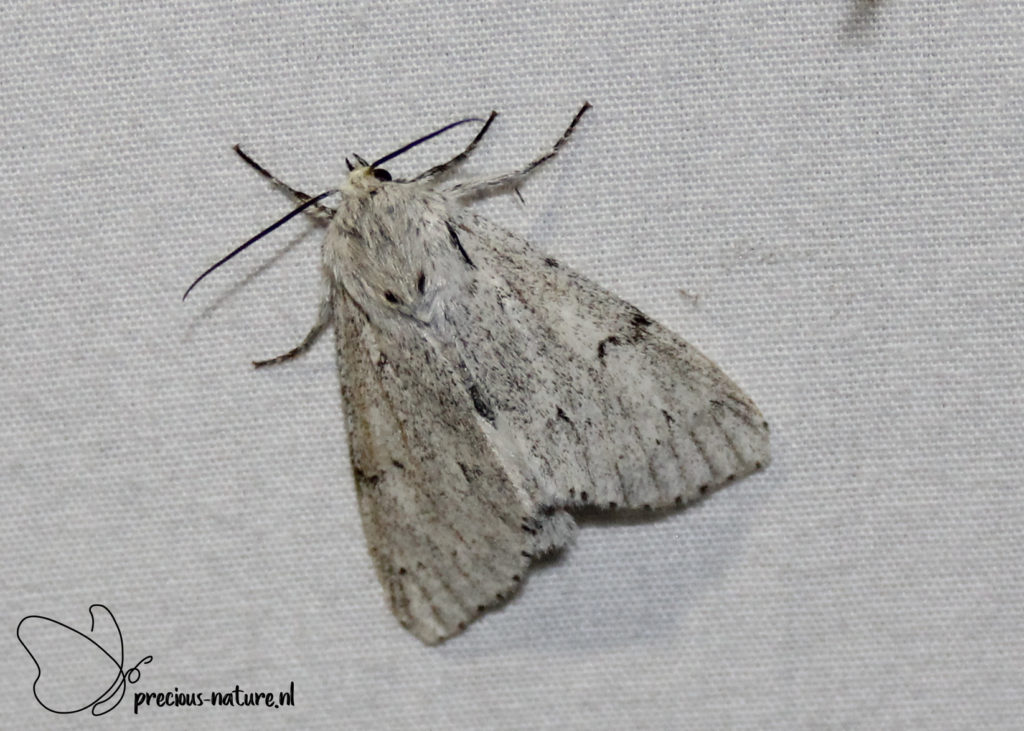 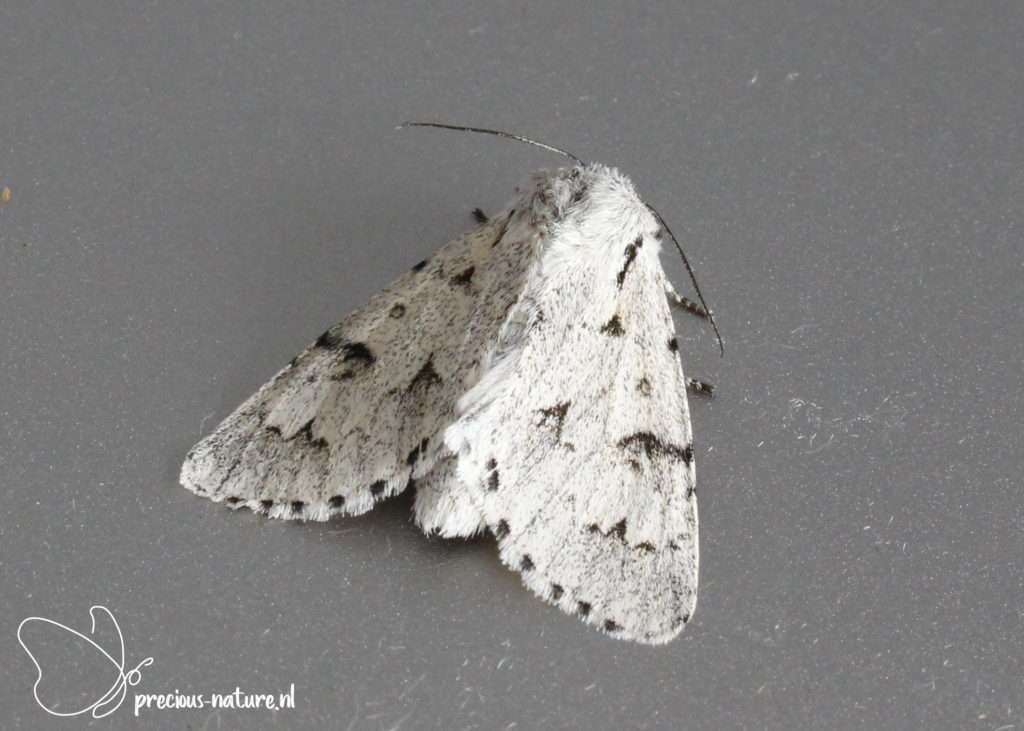 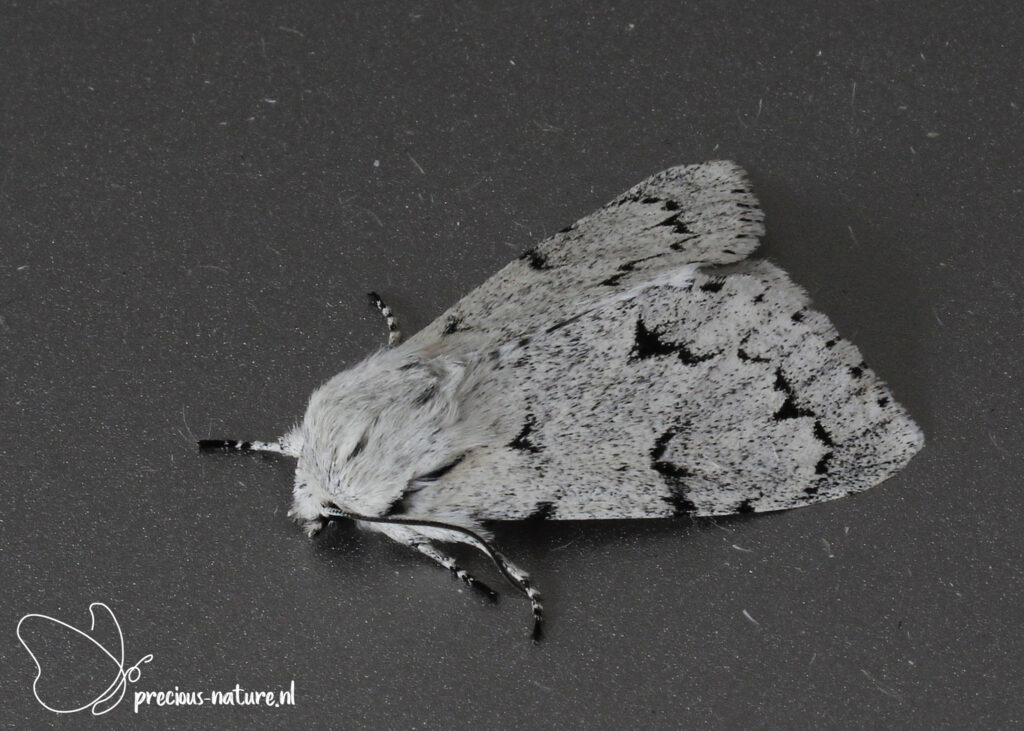 The Knot Grass (Acronicta rumicis) is a medium-sized owl that is best recognized by the chalk-white spots along the dorsum of the forewing. The wing is also irregularly speckled black and has an unclear blackish drawing on a grey wing. The kidney mark and oval mark are clearly outlined in black. The flight period is from mid-April to October in two and sometimes three generations and the wingspan is 30-35mm. Host plant: Sorrel, hops, Blackberry, and Hawthorn. Dutch name: Zuringuil. Frisian name: Soerstâleûltsje.

An owlet moth that is difficult to distinguish from two other owls is the Grey dagger (Acronicta psi). This owlet moth is very similar to the Dark Dagger (Acronicta tridens) and the Large Dagger (Acronicta cuspis). The Dark Dagger is quite rare in the Netherlands and therefore a hint that my spotted specimen is a Grey Dagger. To be sure, genitalia research can be done. The top of the forewing is grey with brownish tones and the most striking are the elongated stripes in the shape of a spear point (trident). The oval mark is outlined with a thin black line that extends to the kidney mark. A thin black angular transverse line can be seen at the apex. The flight period is in two generations from mid-April to September and the wingspan is 34-40mm. Host plant: Blackthorn, Hawthorn, Birch, and Elm. Dutch name: Psi-uil. Frisian name: Psyûltsje. 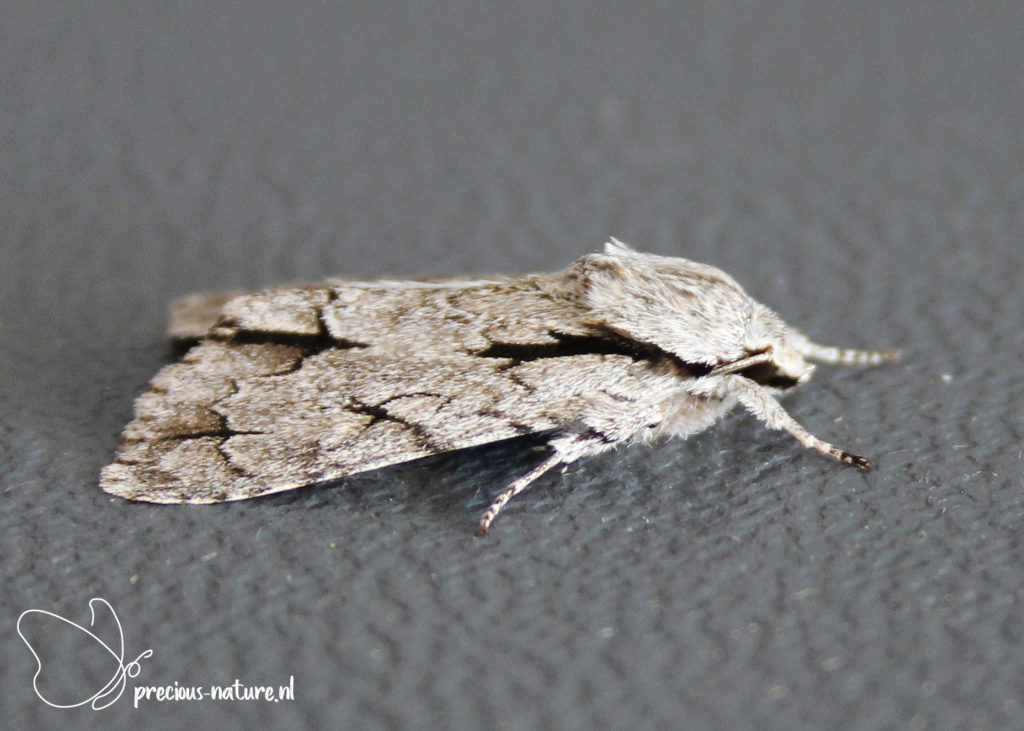 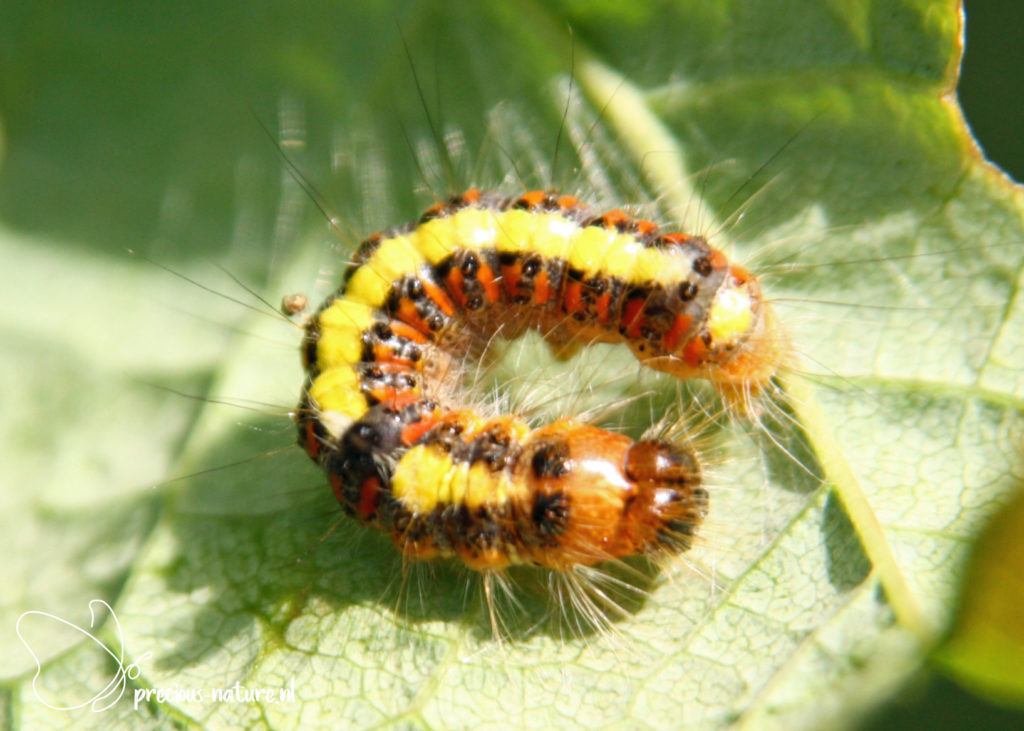 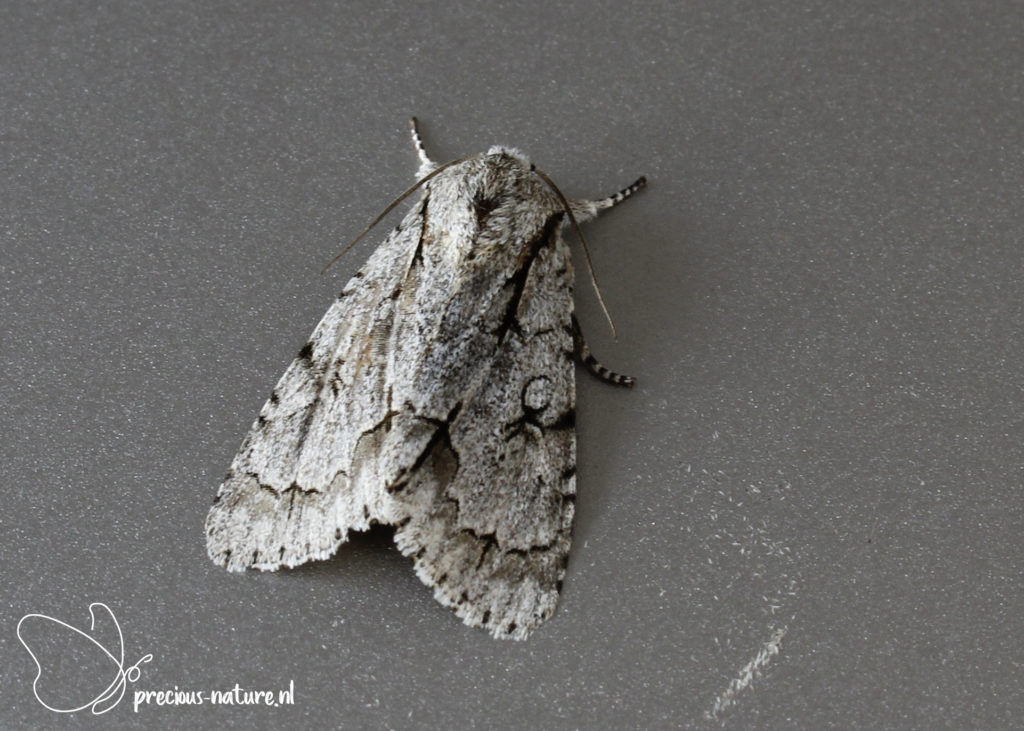 The Coronet (Craniophora ligustri) has a forewing, the ground color of which is black-green. The top of the forewing has a pattern of purplish-brown, olive-green spots and transverse lines. A large whitish spot can be seen on the outside of the kidney mark. In some specimens, that white spot is almost absent. The shape of the crown often remains visible. On the top of the chest piece is a drawing in the shape of a skull which is not always clearly visible. The wingspan is 30-35mm and the flight period is from April to September in two generations. Host plant: Ash and Privet. Dutch name: Schedeldrager. Frisian name: – 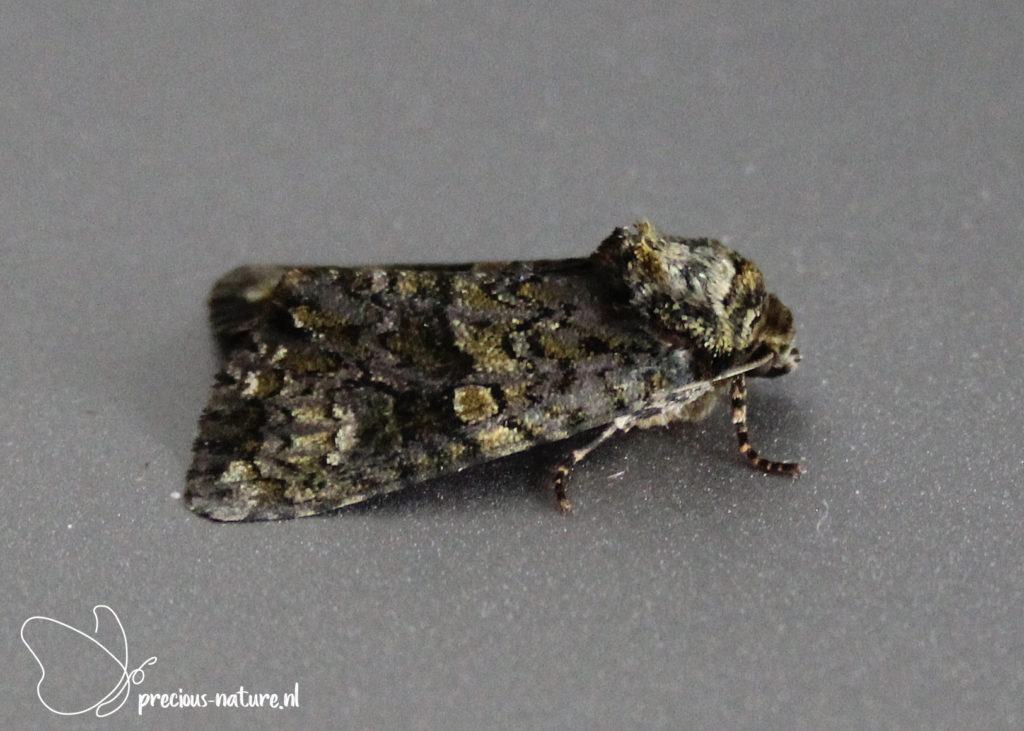 The Scarce Merveille du Jour (Moma alpium) is the only green, black and white-colored owl that flies in the summer. The lichen green forewing has a whitish leading edge and two whitish longitudinal stripes. The black drawing roughly consists of three transverse bands, of which those basal area and those in the marginal field are usually strongest. Along the trailing edge are two brown spots. The wingspan is 30-35mm and the flight period is from May to August in one generation. Host plant: Oak, beech, and birch. Dutch name: Gevlekte groenuil. Frisian name: Bûnt grienûltsje. In terms of color and appearance, you would not expect the Reed Dagger (Simyra albovenosa) directly as a member of this family but rather related to the wainscots. The forewing is light-colored and from the base, a black smudge runs across the wing and one or two dark smudges can also be seen in the marginal area. The hindwing is pure white. This also distinguishes it from the similar Striped Wainscot (Mythimna pudorina), which has a greyish brown hindwing, and the Southern Wainscot (Mythimna straminea), which has dark veins and a row of black stripes on the hindwing. The wingspan is 32-40mm and the flying period runs from April to mid-September in two generations. Host plant: Common Reed. Dutch name: Kleine rietvink. Frisian name: Lytse reidspinner. The Popular Grey (Subacronicta megacephala) is very similar to the Knott Grass (Acronicta rumicis) and belongs to the owlet moths. The Knott Grass has a clear white spot at the inner edge of the forewing which is missing from the Popular Grey. The forewing is quite wide and has a rounded apex. The light oval mark is usually easy to distinguish and the kidney mark is almost inconspicuous. The color of the forewing is greyish cream white, but it can also be a bit browner in color with black tones. The hindwing is whitish in the male and grey in the female. The flight period is from April to September and the wingspan is 40-44mm. Host plant: Poplar and Willow. Dutch name: Schilddrager. Frisian name: Skylddrager. 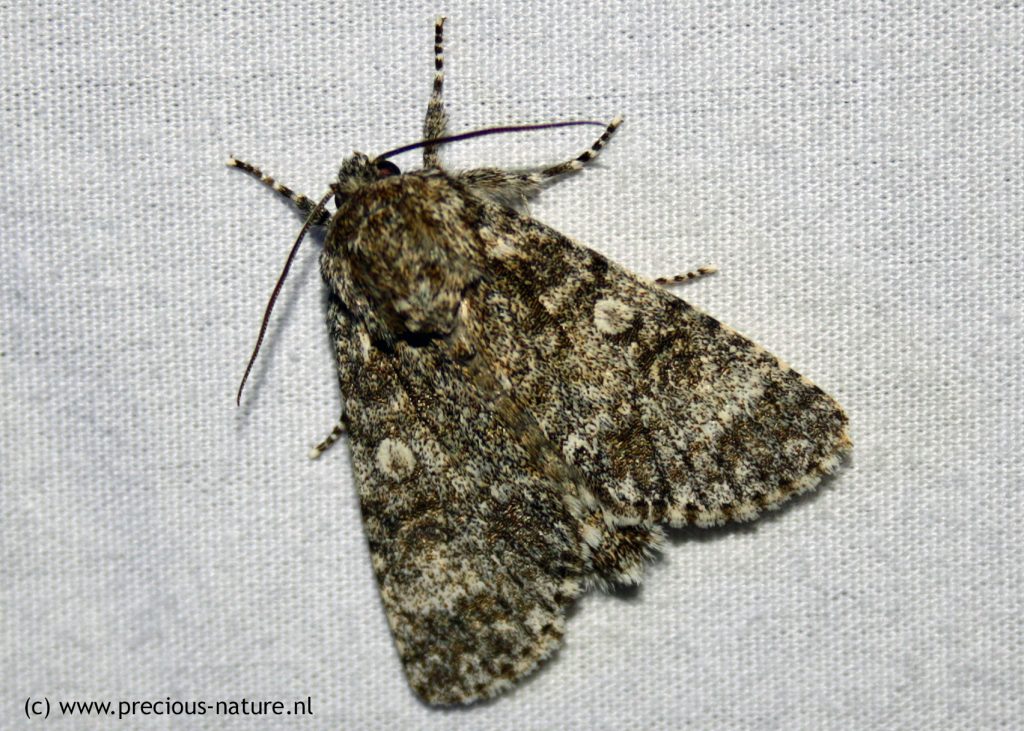 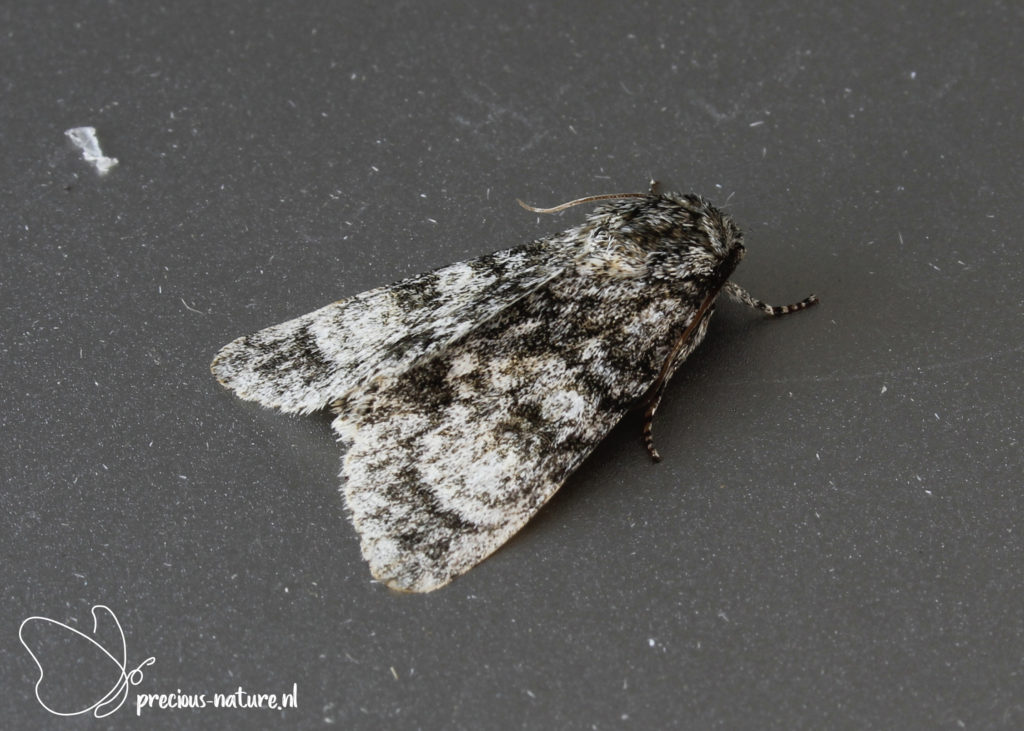